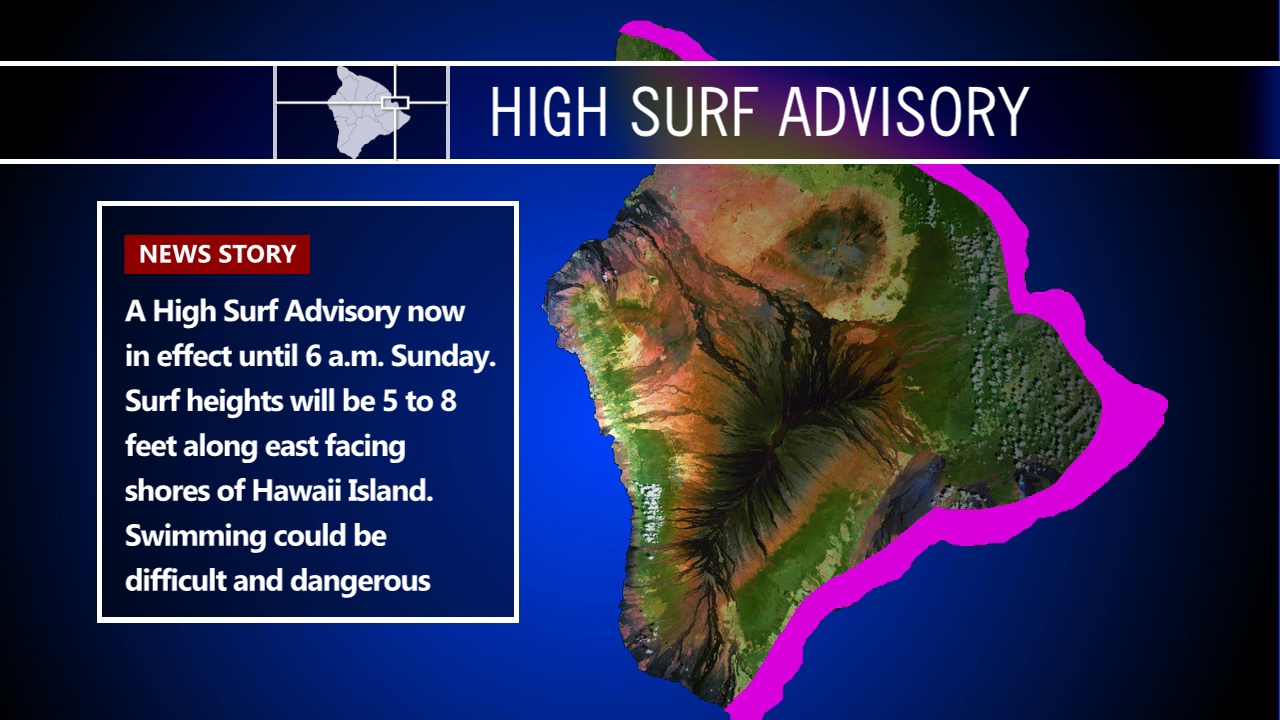 HAWAII ISLAND - An incoming north-northeast swell will keep surf near advisory levels today, before an increase late Sunday as the swell fills in.

UPDATE (Oct. 8, 2017 – 3 p.m.) – In a Marine Weather Statement issued by the National Weather Service at 1:53 p.m. Sunday, forecasters warned of potential harbor surges that could affect all north facing harbors:

Light to moderate harbor surges and waves breaking at channel entrances can be expected for all north facing harbors through tonight. Of particular interest are Kahului and Hilo Harbors where operations and activities could be impacted. This wave action is being caused by an above normal north-northeast swell that is peaking this afternoon. A gradual decline in this swell is expected overnight.

UPDATE (Oct. 8, 2017 – 12:45 p.m.) – At 11 a.m., the National Weather Service revised forecasted wave size in the continuing High Surf Advisory, saying the surf heights could reach 8 to 12 feet along east facing shores through the rest of today before lowering to 6 to 9 feet tonight.

UPDATE (Oct. 8, 2017 – 8 a.m.) – The High Surf Advisory for east facing shores of Hawaii Island has been extended until Monday morning.

The National Weather Service says the incoming north-northeast swell will keep surf along east facing shores near or above advisory levels today as the swell fills in and peaks. Surf will begin to decrease tomorrow. Surf heights could be 6 to 9 feet.

Surf heights will be 5 to 8 feet along east facing shores through Saturday night.

According to today’s National Weather Service in Honolulu forecast discussion:

A north-northeast swell has been generated by the low, and while the trade wind swell is on the decline, the north-northeast swell will keep surf along east facing shores near advisory levels today. This north-northeast swell is expected to fill in Sunday night. The High Surf Advisory has been extended through tonight, and may need to be extended further depending on this swell. Surf along north facing shores exposed to this swell is expected to remain below advisory levels. The direction of the arriving swell raises some concerns for surges in the Hilo, Kahului, and Haleiwa Harbors but the swell period may be too short with this event to cause significant problems.

The current north-northwest swell will trend down into the weekend. Small reinforcing south- southeast and southwest swells will keep surf from going flat along south-facing shores into next week.