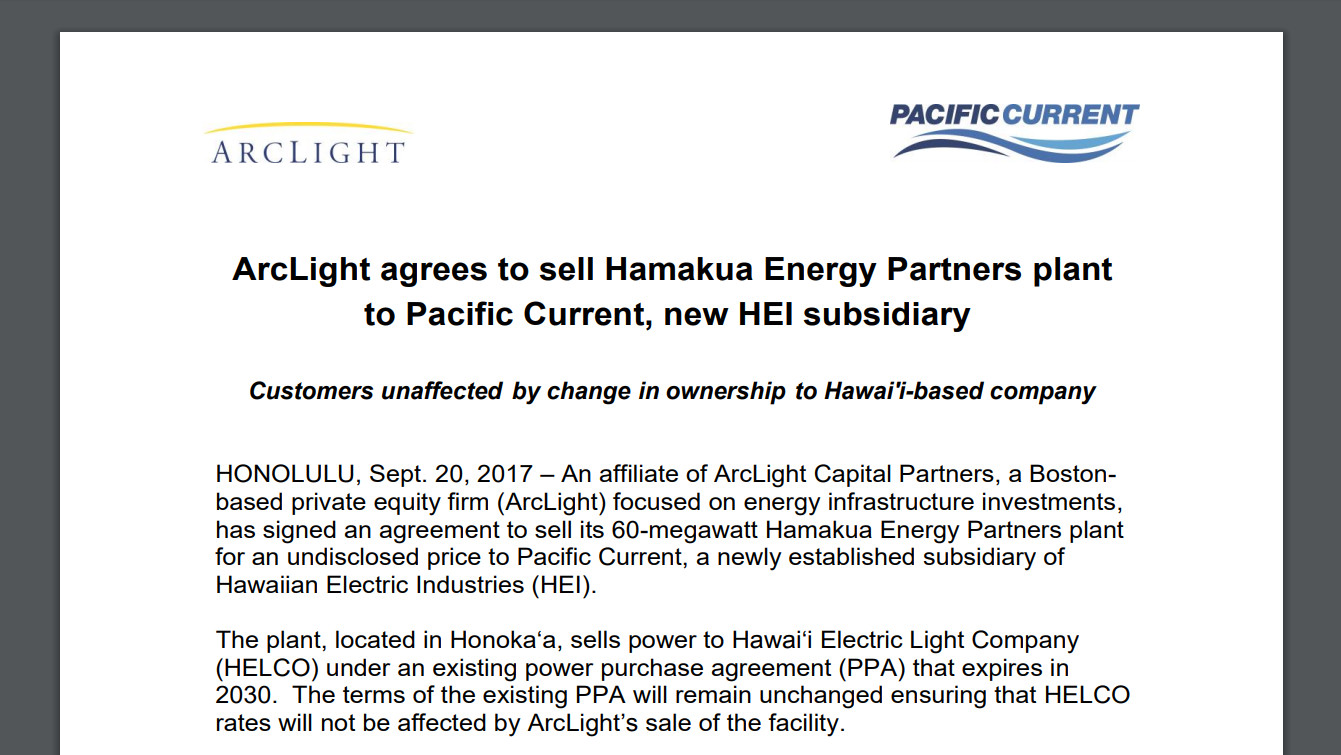 (BIVN) – The Hawaii Public Utilities Commission has turned its attention to the recent news that a newly established Hawaiian Electric Industries subsidiary has agreed to buy the Hamakua Energy Partners power plant, after the regulatory authority denied an earlier bid by HELCO to buy the same power plant.

In February 2016, the Hawaii Electric Light Company – the Big Island-based regulated utility that is also a subsidiary of HEI – applied to the PUC to acquire and operate the 60-megawatt plant in Honoka’a. In March 2017, the PUC denied the application because regulators “believed to be insufficient benefits to customers if the plant was directly owned by HELCO”, the power utility said.

The Hamakua Energy Partners plant is a critical piece to Hawaii Island’s energy portfolio, and can provide 22 percent of the island’s generating capacity. The facility, which went into operation in 2001, is one of the highest efficiency, lowest emission power plants in the state, the utility says.

The power plant already sells power to HELCO under an existing power purchase agreement that expires in 2030.

In August, we interviewed HELCO president Jay Ignacio about another PUC docket – a power purchase agreement with the Hu Honua Bioenergy LLC in Pepeekeo – that became somewhat entagngled with the bid to buy the Hamakua Energy Partners plant.

“It has been a privilege serving the people of Hawai‘i Island and providing their energy needs over the past seven years,” said Daniel Revers, ArcLight’s managing partner and founder, in the media release.

HEI, which did not disclose the price of the sale, says the terms of the existing power purchase agreement will remain unchanged “ensuring that HELCO rates will not be affected by ArcLight’s sale of the facility.”

“We’re pleased to be able to purchase the plant and keep it operating under the existing PPA,” said Greg Hazelton, HEI executive vice president. “The plant is vital in providing firm power to ensure continued reliability for customers while HELCO works to transition its power supply to meet the state’s 100 percent renewable energy goal.”

HEI also says management and operations of the plant will not change. The plant, which employs 15, will continue to be managed and operated by Consolidated Asset Management Services, which has managed the plant since 2010, the utility says.

“Knowing the importance of this facility to Hawai‘i Island and the ability of our company to provide a strong financial foundation for its continued operation, we made the decision to acquire the plant, with the purchase price and risks of ownership borne solely by HEI shareholders, not customers of HELCO,” Hazelton said.

Now, the use of the new subsidiary to complete the sale of the facility is being questioned by state regulators.

In an October 2 letter to Hawaiian Electric President and CEO Alan Oshima, PUC chair Randy Iwase is asking for a response to the following questions:

1) Please discuss in detail all measures HELCO has instituted to identify and prevent potential preferential treatment of its affiliate’s interests in the HEP power plant, in the following areas:

a) operational decisions about unit commitment and dispatch;

b) interconnection of new generation resources, including both utility-scale and distributed sources;

f) re-negotiation of the HEP power purchase agreement with an affiliate IPP;

g) development and implementation of new programs to invest in “nonwires alternatives” to generation, such as energy storage and distributed energy resources; and

2) Please discuss in detail measures HELCO has instituted to prevent disclosure of confidential information to its affiliate and its affiliate’s owners.

3) Please discuss in detail the code of conduct between representatives from HELCO and Pacific Current that ensures any contracts or agreements between these entities are in furtherance of the interests of the public.

4) Please discuss in detail any additional measures HELCO has taken to ensure that the agreement between HELCO and Pacific Current is in furtherance of the interests of the public.

5) Is HELCO or another Hawaiian Electric regulated utility currently in discussions or negotiations with Pacific Current for any new contracts or agreements? If so, please describe the nature of the contract or agreement under discussion or negotiation and any measures to prevent conflicts of interest with potential competitive procurement of similar services, equipment, or supplies from non-affiliated entities.

Chair Iwase said HEI’s response to the letter will help the PUC decide “whether the power purchase agreement between HELCO and its affiliate Pacific Current is in furtherance of the interests of the public”.