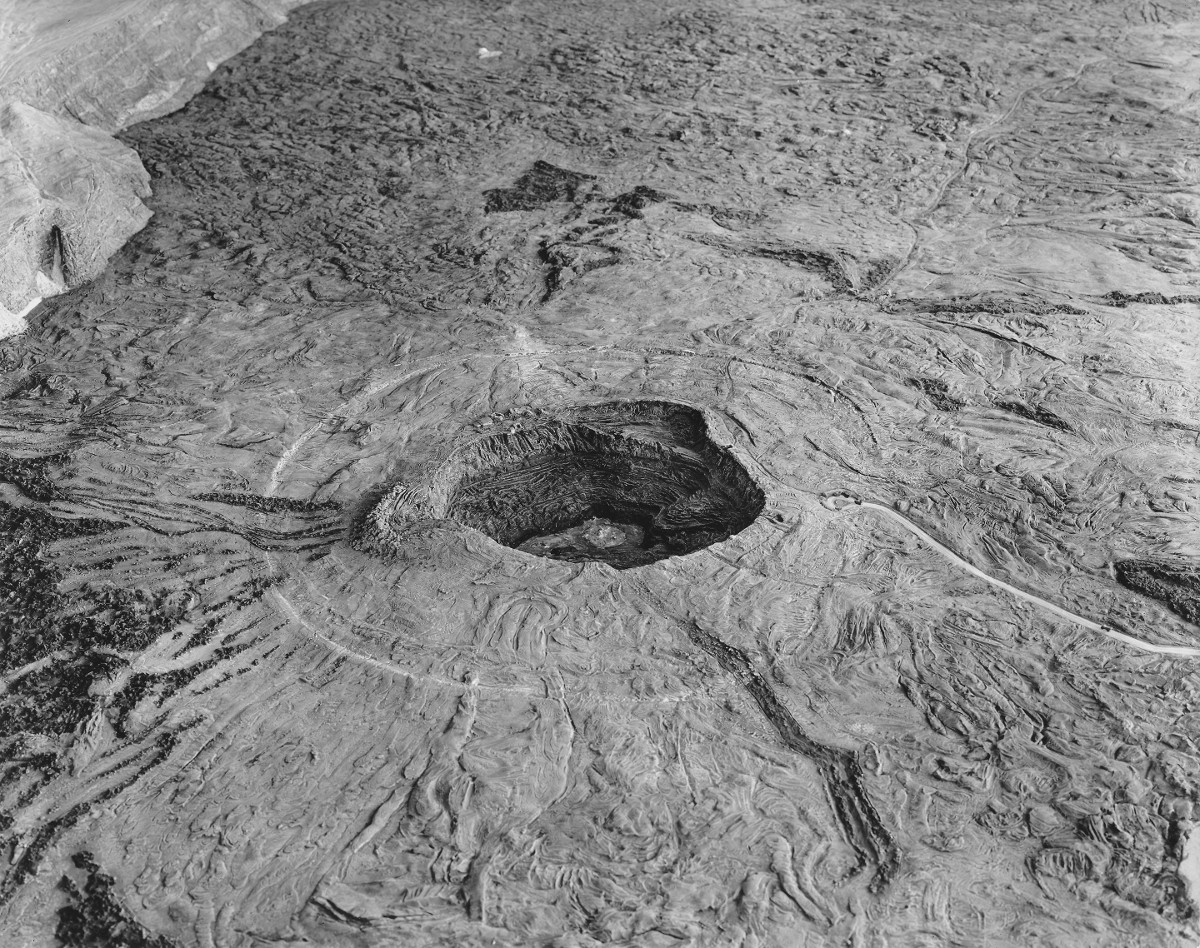 This view of Halema‘uma‘u as it appeared in the 1917 relief model by George Carroll Curtis shows fine details around the crater, including the first road for automobiles, which ended near the crater rim. The light-colored circular feature around Halema‘uma‘u is a nearly continuous escarpment along which subsidence occurred. Photo by Burr A. Church.

In today’s age of aerial photography, satellites, and drones, bird’s-eye views of geologic features are taken for granted. A century ago, such depictions posed enormous challenges.

At first glance, the images above appear to be aerial photographs of Kīlauea Volcano’s summit caldera, but these photos were taken six years before the first airplane overflight. The images actually show a model of the volcano displayed at a Harvard University museum for many decades.

So, how was the model constructed? And who made it?

The story began in March 1913, when George Carroll Curtis, an artist, geologist, geographer, and expert in the production of relief models, traveled to the Island of Hawai‘i to make a careful survey of the caldera at the summit of Kīlauea. He established a network of survey flags and took photographs at each using a revolving panoramic camera that provided a complete view of the caldera. But progress constructing the model was slow, because Curtis lacked a high altitude perspective of Kīlauea’s summit.

To solve this problem, Curtis encouraged J.F. Haworth, a wealthy businessman from Pittsburg, to go to Kīlauea and pursue his hobby of flying kites. But these were no ordinary kites.

Each box kite was over 11 feet (3.4 m) long and 9 feet (2.7 m) wide. Instead of string, Haworth used a motorized reel of piano wire to launch and tether the kites, which were capable of lifting a payload of about 100 lbs (45 kg). For the Kīlauea study, the payload was a camera positioned on a wire line several hundred feet (about 60 m) below the kite. A small device was sent up the piano wire to trip the camera shutter for each photograph.

When Haworth arrived at Kīlauea in 1915, he found that kite photography was no picnic on a volcano. High winds at the summit repeatedly dragged the photographer over sharp lava, leaving him bruised and battered. But he finally succeeded in taking a series of photos of Kīlauea Volcano’s summit from various altitudes. These aerial photographs enormously speeded up the work of Curtis on his model.

In 1917, the relief map was finally installed in the Geological Section of the Harvard University Museum and opened for public viewing. The circular model was 14 feet (4.3 m) in diameter, and it was built with a scale of 125 feet to an inch (38 m to 25mm), so there was no vertical exaggeration.

At this scale, Curtis was able to depict minute details of the summit. The model shed light on many geologic features that had not been observed before, such as the elaborate drainage system on the south side of the caldera. Photographs of the model are useful even today to locate historic sites, including roads and other structures that are long gone.

This huge model remained at the Mineralogical and Geological Museum at Harvard University until the mid-1970s, when building renovations required that the exhibit be moved. Unfortunately, the size of the model made relocation impractical, so it was dismantled.

We have searched, without success, for the original summit photographs taken by Curtis and Haworth. Our hope is that they still exist somewhere, preserved in an archive or personal collection of photos. If so, we would love to see them. Images by these intrepid photographers from a century ago could shed new light on features that are the subject of current volcano research.

If you know of these images, or have other historical photographs of Hawaiian volcanoes, HVO would like to hear from you. Email us at askHVO@usgs.gov.