HILO, Hawaii - Hawaii's leaders are hailing the Daniel K. Inouye Highway as the most direct route between East and West Hawaii, improving safety and efficiency. 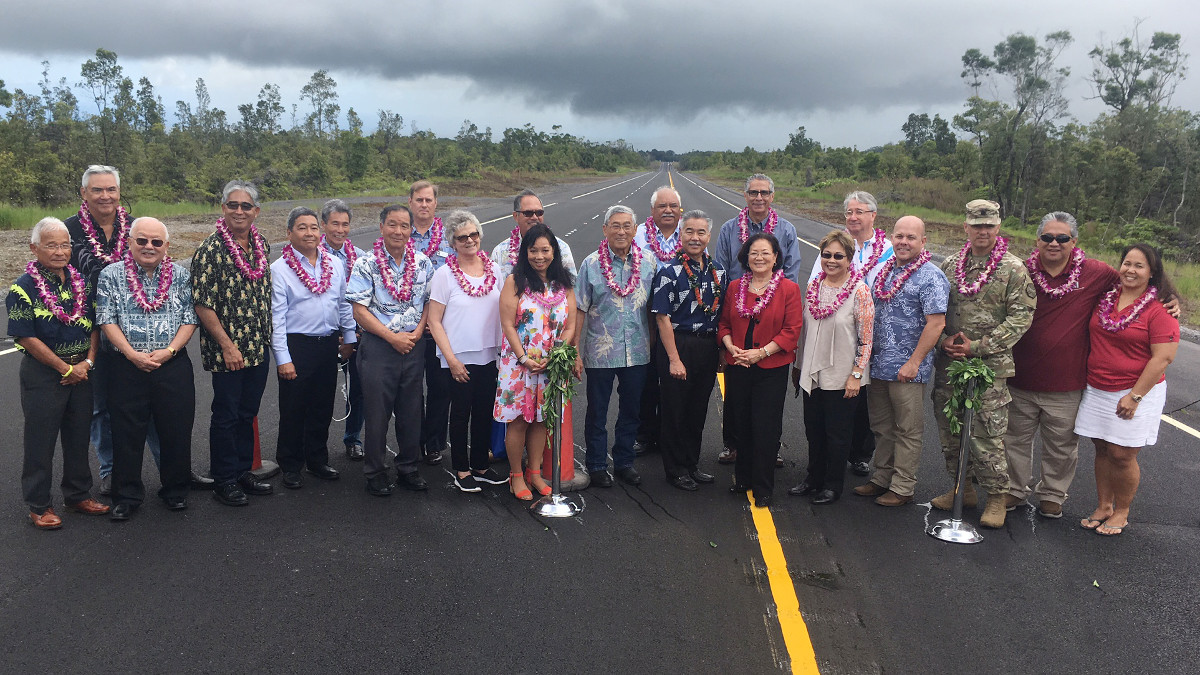 (BIVN) – A crowd of dignitaries and project officials gathered under a big white tent placed in the middle of an empty Saddle Road on Tuesday morning to dedicate the newly finished east-side leg of the cross island highway.

The final phase of the Daniel K. Inouye Highway was opened following a ceremony filled with speeches and mahalos. Many of the speakers – like Governor David Ige, U.S. Senator Mazie Hirono, Mayor Harry Kim, and others – were sure to mention the vision of the late Sen. Dan Inouye, in honor of whom the highway has since been named. Inouye was a foremost advocate for improving the highway that was once listed among the most dangerous in the country. 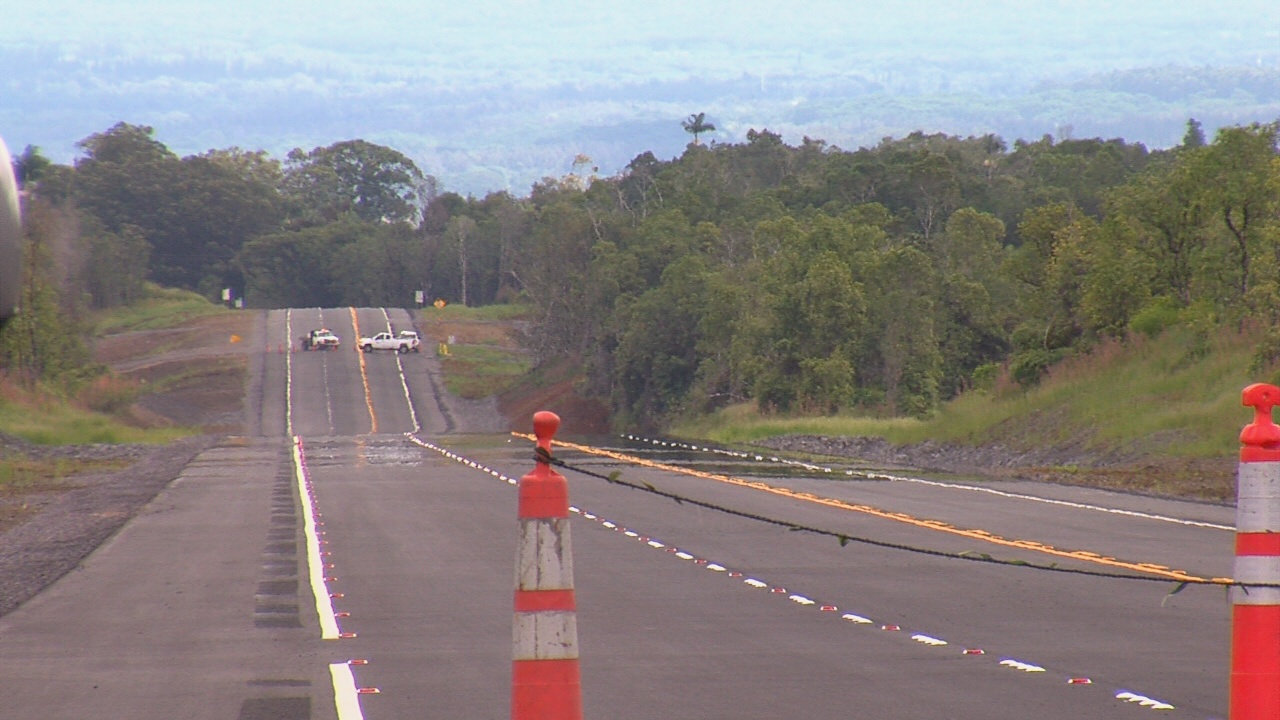 The Hawaii Department of Transportation issued this media release:

The Hawaii Department of Transportation (HDOT) and the Federal Highway Administration (FHWA) are pleased to announce the opening of the final phase of reconstruction on the east side of Saddle Road, now known as the Daniel K. Inouye Highway. The improvement connects the existing highway near milepost 11 to the west end of the Puainako Street extension.

“The importance of the combined Saddle Road Improvement projects as a cross-island route cannot be overstated. It is a huge accomplishment,” said Governor David Ige. “Senator Inouye’s vision when he initiated the Saddle Road Community Task Force in 1993 is an excellent example of government and the community working together to benefit generations to come.”

“This project was of great importance to Dan as it connects east and west, providing safer access for all travelers, as well as economic opportunities for Hawaii Island residents. He tried to make every groundbreaking and celebration, dating back to 2004. I am pleased that the 48-mile road is complete and so honored that it bears Dan’s name,” said Ms. Irene Hirano Inouye, wife of the late Senator Daniel K. Inouye.

The Saddle Road East Side project encompassed a total of nearly six miles of highway, reconstructing approximately three miles of the existing Daniel K. Inouye Highway, upgrading the roadway to modern design standards and including safety features such as 8-foot shoulder lanes, straighter alignment and a climbing lane, and adding three miles of new road. The project also increased the overall highway capacity and removed potential conflicts between military operations and public traffic. The cost was $57 million, which was within the allocated budget.

This joint project between HDOT and FHWA presented unique challenges such as varying subsurface conditions from aʻa, pahoehoe, dense basalt, and volcanic ash and the need to address precautionary measures necessary for containment, treatment and placement of cleared timber to help prevent the spread of the Rapid Ohia Death fungus.

Funding for the Saddle Road projects was made possible through the U.S. Department of the Army Defense Access Road and Ecosystem Management Programs, U.S. Congress, and Hawaii Department of Transportation.

“The completion of the Saddle Road East Side project provides a safe, efficient, cross-island route with access across Hawaii between Mauna Kea and Mauna Loa,” said FHWA’s Central Federal Lands project manager Mike Will. “In addition, the use of the Pohakuloa Training Area quarry resources is estimated to have saved approximately $20 million of state and federal funding.”

Previous phases of the Saddle Road Improvements widened and aligned more than 41-miles of road. The east side phase opened today makes for a total of nearly 48 miles of road that has been improved to modern standards at a total approximate cost of $316.5 million, of which the U.S. Army contributed more than $100 million. Saddle Road was initially built as a one-lane road by the U.S. Army in 1942 to connect military training facilities.

The Daniel K. Inouye Highway, State Route 200, begins at the outskirts of Hilo near milepost 6 and extends westward to Mamalahoa Highway State Route 190. The road passes through the saddle between the Mauna Loa and Mauna Kea volcanoes. The Daniel K. Inouye Highway climbs nearly 5,500 vertical feet from its eastern terminus to its mid-point. The rainfall gradient along the highway ranges from 10 inches to 200 inches per year, which posed an additional challenge for crews during construction. 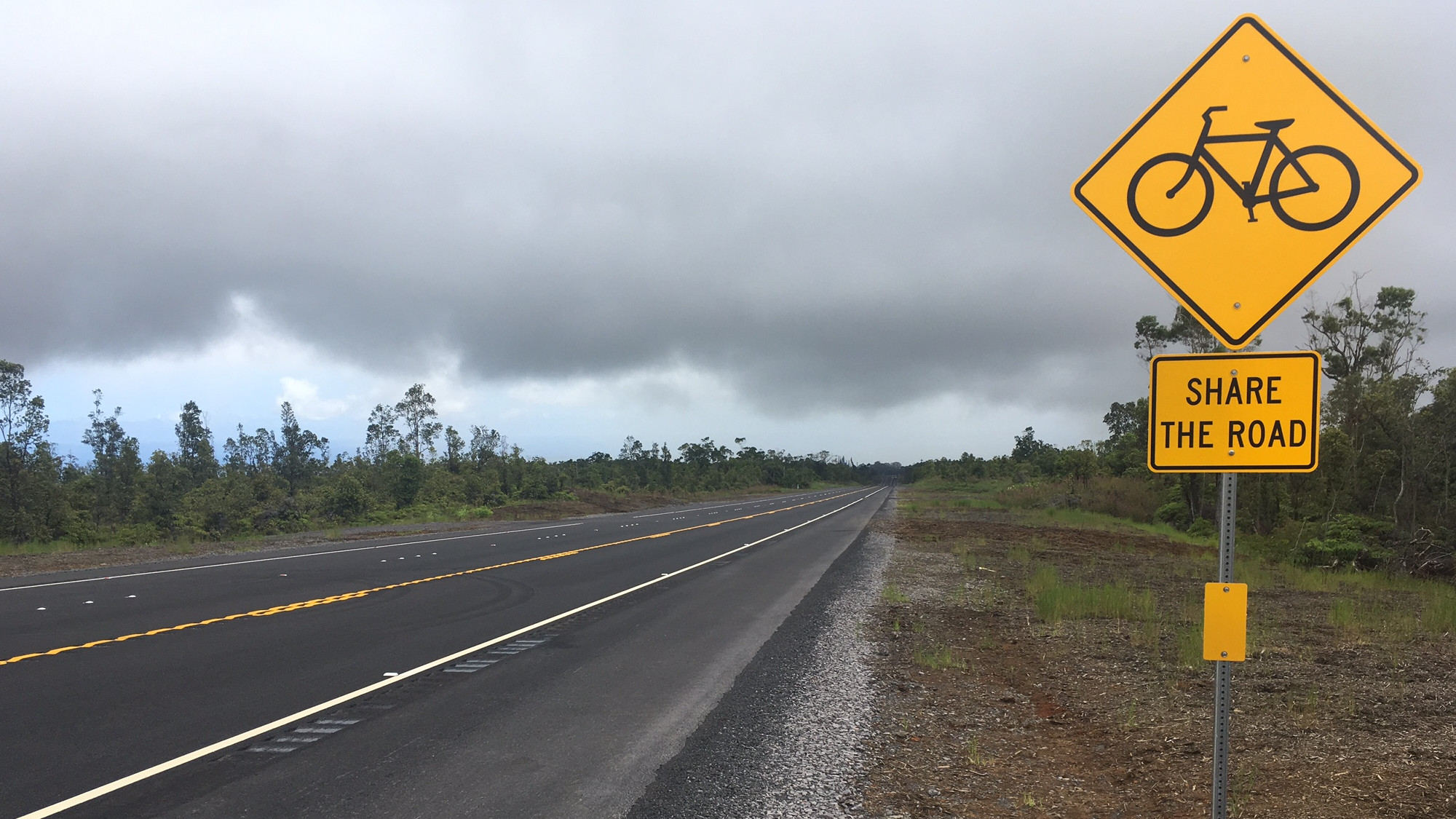