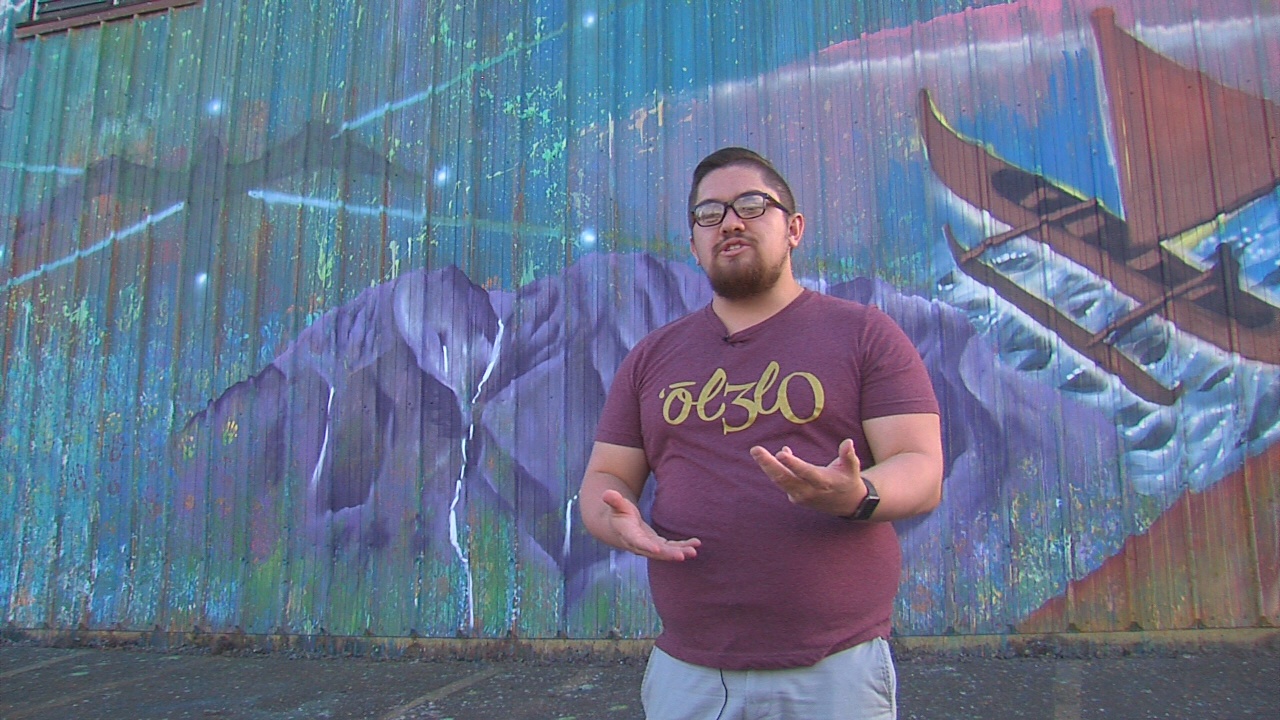 Kamalani Johnson talks about the Hilo installment of the Ke Kanakolu project.

The University of Hawaii – Hilo issued this detailed news release about the project in advance of the completion of the mural:

The University of Hawaiʻi at Hilo’s Ka Haka ʻUla O Keʻelikōlani (KHʻUOK) College of Hawaiian Language is taking part in a statewide campaign to commemorate a landmark anniversary for Hawaiian language education by designing and creating ten Living Legacy Murals inspired by the mo‘olelo (story) of Kalapana. Participants have recently gathered in East Hawaiʻi to begin work in Hilo on the project’s third installment, sponsored by KH`UOK, Kamehameha Schools and the state Department of Education Office of Hawaiian Education.

“The Ke Kanakolu (The 30th) project was created by 808 Urban’s Living Legacy Series to celebrate the 30th anniversary of Ka Papahana Kaiapuni – the Hawaiian Immersion Schools in Hawaiʻi,” said Kamalani Johnson, lecturer, KHʻUOK and the project’s Hawaiian Language Director. “The project’s goal is to use art as a medium to invigorate Native Hawaiian identity and perpetuate Hawaiian values, language and culture, while raising awareness of the 23 Hawaiian Language Immersion and Charter schools that form Ka Papahana Kaiapuni.”

ʻĀuna Pāheona, a collective of art-centric individuals, led by graffiti artist John “Prime” Hina, has been traveling the state since August. The group is engaging local artists and Hawaiian Immersion schools to design and create the murals, which are being painted one-by- one, culminating on May 25, 2018 in Hanapēpē, Kauaʻi.

The story of Kalapana involves his mother, Halepākī from Kauaʻi and his father, Kānepōiki from Kona, who dies when he loses a hoʻopāpā (battle of wits) challenge from Kaua‘i chief, Kalanialiʻiloa. When he matures, Kalapana travels to Kaua‘i and avenges Kānepōiki’s death by winning his hoʻopāpā challenge through his knowledge of the winds, rains, plants, songs, and ʻai (tools) that are unknown to Kalanialiʻiloa.

“This mo‘olelo was selected for the tenacity and drive of the protagonist,” Johnson said. “The strife Kalapana experiences with the loss of Kānepōiki, that leads to avenging the will of his father is comparable to Hawaiian language revitalization efforts.”

ʻĀuna Pāheona, worked with Ke Kula ʻo ʻEhunuikaimalino, to complete the first mural in Keauhou, Kona. They are now nearing completion of the second painting in Nānākuli on Oʻahu, working with Ke Kula Kaiapuni o Nānākuli. The first two installments focus on Kalapana learning hoʻopāpā with his mother, Halepākī, and aunt, Kalaoa.

The Hilo mural, located at 51 Makaʻala Street, will depict Kalapana unofficially putting his hoʻopāpā skills into play after completing his schooling with Kalaoa, then going to Kauaʻi where he encounters a local of the area. Painting participants will include teachers, students and ʻohana (family) from Ka ʻUmeke Kāʻeo, along with Hawaiian language students from KHʻUOK and the Hawaiian medium laboratory school Ke Kula ʻo Nāwahīokalaniʻōpuʻu.

The Ka Papahana Kaiapuni celebration coincides with the 20th anniversary of KHʻUOK. Director Keiki Kawaiʻaeʻa says the murals commemorate the progress and revitalization efforts of the Hawaiian language through its Hawaiian medium-immersion educational pathway as Hawaiʻi prepares to mark next year’s 40th anniversary of ʻōlelo (language) Hawaiʻi as a state official language.

“KHʻUOK continues to support the renormalization of ʻōlelo Hawaiʻi through various initiatives, including new Hawaiian lexicon, an on-line dictionary at wehewehe.org and Hawaiian medium curriculum for grades K-12 supported by the college’s Hale Kuamoʻo Hawaiian Language Center. Additional contributions include the preparation of Hawaiian medium-immersion teachers through the Kahuawaiola Indigenous Teacher Education program and Hawaiian medium laboratory schools such as Nāwahīokalaniʻōpuʻu in Keaʻau,” Kawaiʻaeʻa said. “Through strong collaboration of P-12 and tertiary education working together with schools, families, government and community, Hawaiian language is showing a shift towards recovery of this precious cultural resource.”