HAWAII ISLAND - Mauna Loa volcano is not erupting, but scientists and emergency officials are making sure they have all the information they need to make good decisions, just in case. 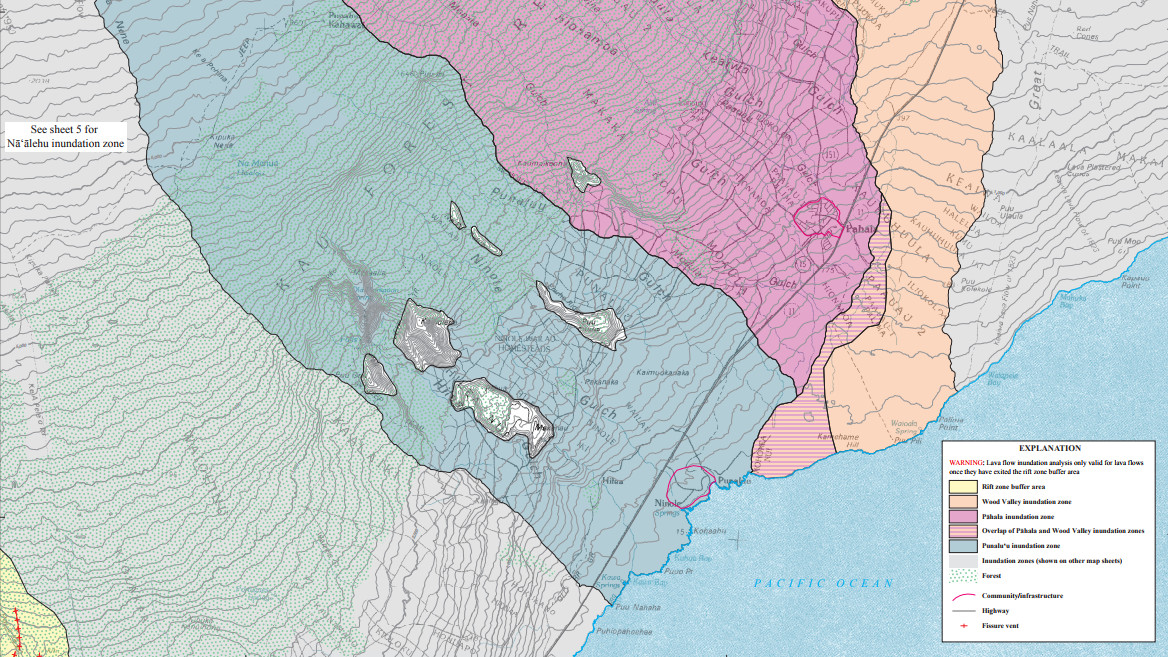 USGS map shows Mauna Loa lava inundation zones for Pahala, Wood Valley and Punalu’u in Ka’u. It is one of many maps recently published by HVO.

(BIVN) – Mauna Loa is not erupting, but scientists with the USGS Hawaiian Volcano Observatory are watching it closely. Measurements continue to show inflation of the magma reservoir beneath the massive volcano.

Mauna Loa is on a “yellow advisory” alert level, one category down from nearby Kilauea volcano, which is on “orange watch” as it erupts lava at the summit and on its East Rift Zone.

Tha article introduces new maps produced by the USGS that identify lava inundation zones for the volcano. The maps will help Hawaiʻi County Civil Defense and other emergency managers identify people, property, and facilities at risk during future eruptions.

HVO constructed nine maps depicting 18 inundation zones on Mauna Loa. Each zone identifies a segment of the volcano that could erupt lava and send flows downslope.

The information is critical for response planning. When a Mauna Loa eruption starts, the maps can help decision makers quickly identify communities, infrastructure, and roads between possible vent locations and the coast, facilitating more efficient and effective allocation of response resources. The public can also use the maps to consider where lava flows might go once an eruption starts.

Before these maps were published, we sat down with Hawaii County Civil Defense administrator Talmadge Magno – a former National Park ranger – to talk about the emergency response in case of a Mauna Loa eruption.

“We’ve talked to HVO as well,” Magno told Sherry Bracken. “Of course, in my previous job, I had a pretty good relationship with them, monitoring Kilauea as well as Mauna Loa. They elevated the alert level for Mauna Loa about two years ago. Its kind of maintained that upper level activity. So, we’ve got that on our horizons.”

“We’ll probably be working with (HVO) to put some information out there to the public,” Magno said, “maybe having some neighborhood meetings and so forth.”