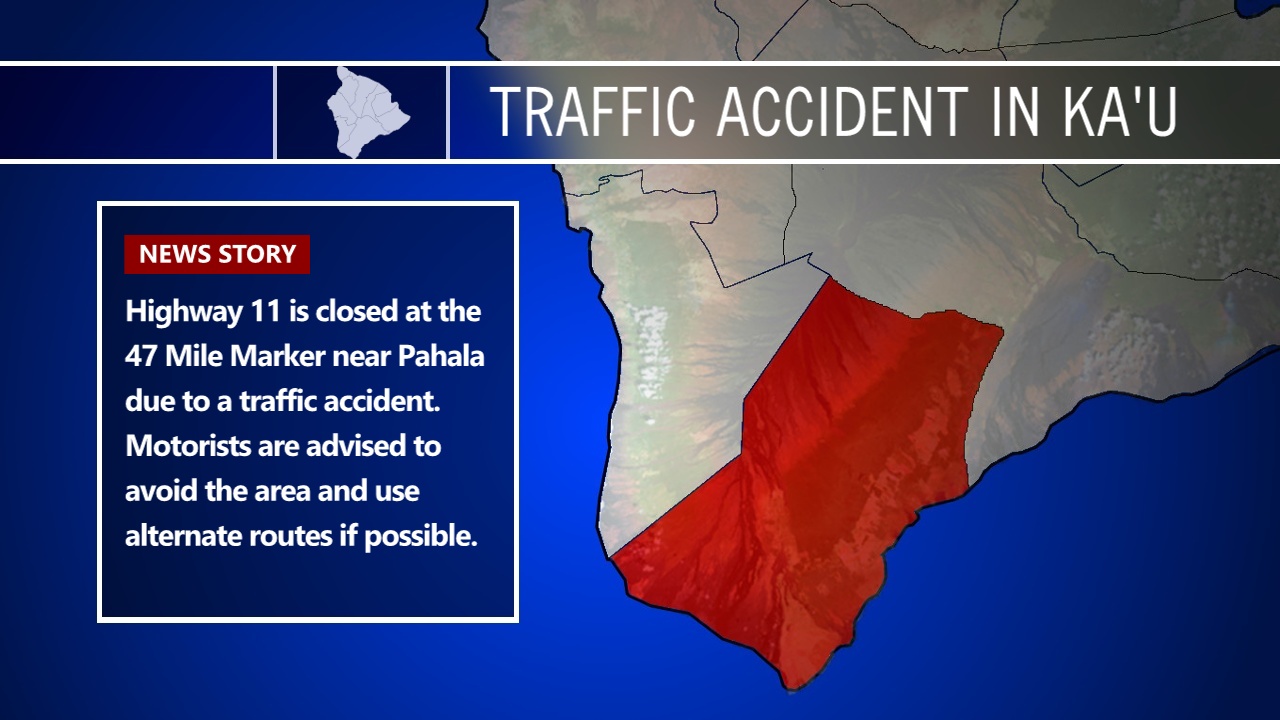 UPDATE (3:45 p.m.) – The Hawaii County Police Department has reported the details of this morning’s fatal crash in Kaʻū. The name of the deceased is being withheld pending positive identification.

Responding to a 3:39 a.m. call, police determined that a 1999 Plymouth sedan operated by the unidentified male party had been traveling south on the Māmalahoa Highway when it crossed over the center line of the roadway and was involved in a head-on collision with a 2013 Isuzu cargo van operated by a 55-year-old Mountain View man. The collision caused the Plymouth sedan to be fully engulfed by fire, which was extinguished by the Hawaiʻi Fire Department.

The unidentified driver of the Plymouth sedan was taken to the Hilo Medical Center where he was pronounced dead at 8:40 a.m.

The driver of the Isuzu cargo van was also taken to the Hilo Medical Center where he was treated for his injuries sustained in the collision, of which he is listed in stable condition.

Police believe speed was a factor in the crash but is not immediately known if alcohol was a factor.

An autopsy has been ordered to determine the exact cause of death and to identify the male party.

UPDATE (9:15 a.m.) – The Hawaii Police Department reports that Highway 11 at the 47 Mile Marker between Pahala and Volcano in Kaʻū is now open to all traffic. Motorists are advised to expect delays and to drive with caution in the area, officials say.

UPDATE (8 a.m.) – The Hawaii County Fire Department confirms that one person died in this morning’s crash on Highway 11. Providing details in a news dispatch, firefighters say they arrived on the scene at 3:40 a.m. and found a large delivery truck laying on its side, blocking the highway. The driver of the truck had gotten out. There was also a “small compact vehicle, heavily damaged and fully engulfed in flames.”

After the car fire was suppressed, fire personnel found “a single victim in driver seat burned beyond recognition.” The cause of the crash is being investigated by police. The fire department also searched the area around the roadway for “more possible victims in case of being ejected from the vehicle.”

(BIVN) – The Hawaii Police Department reports that Highway 11 is closed at the 47 Mile Marker near Pahala due to a traffic accident.

In a Hawaii County Civil Defense message issued at 4:45 a.m., motorists were advised to avoid the area and use alternate routes if possible.

It is unknown at this time when the road will reopen, officials say, but police estimate the closure will last for several hours.