HILO, Hawaii - Waiakea High School cafeteria was crowded with residents who came from across the Big Island to oppose the proposed Hawaii-Southern California Training and Testing. 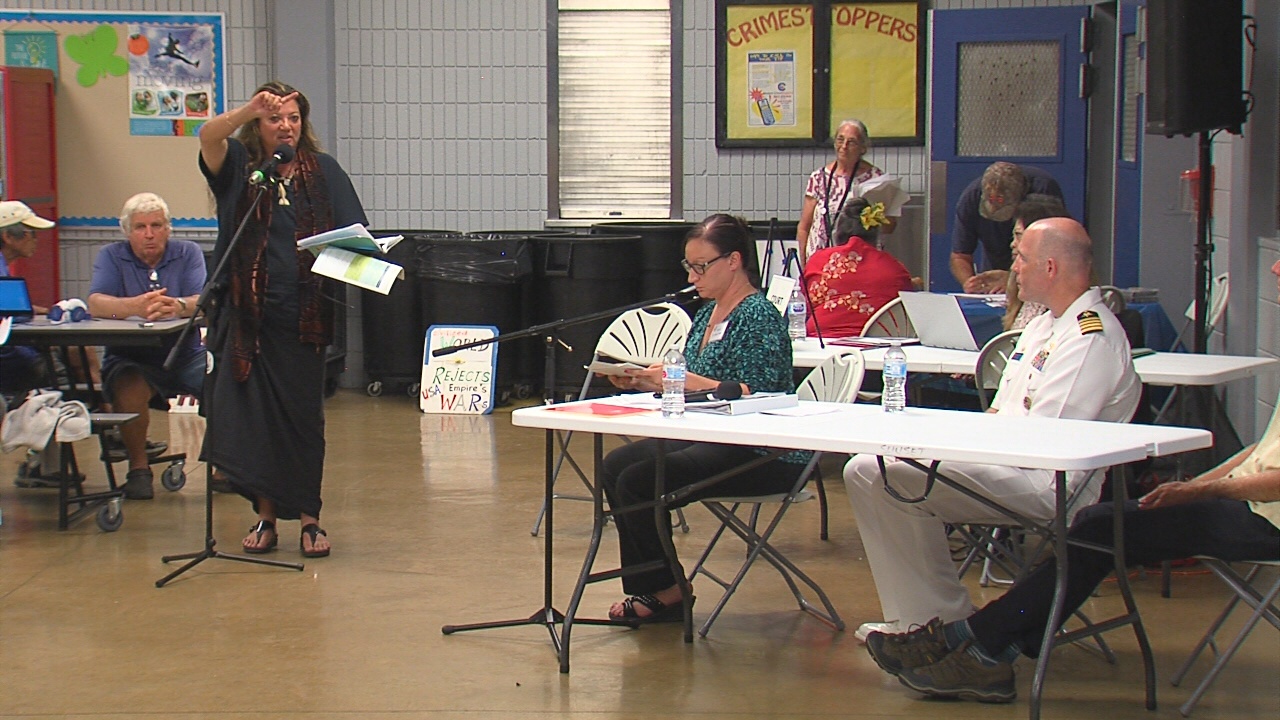 UPDATED (4:30 p.m. on Nov. 11) – Added the presentation made by the United States Navy before the hearing.

(BIVN) – Advocates for Pacific Ocean cetaceans, as well as the Hawaiian Kingdom, spoke out en masse Thursday evening during a public hearing on a draft environmental impact statement for ongoing naval training.

The United States Navy’s use of sonar has upset island residents, many of whom are concerned with the health of the whales and dolphins living in the waters of the archipelago.

The Navy has prepared a Draft EIS/OEIS to “re-evaluate potential environmental impacts associated with ongoing naval training and research, development, testing, and evaluation (hereafter referred to as “training and testing”) activities conducted within existing Navy range complexes in Hawaii and Southern California, and the transit corridor that connects them,” the Navy says on its project website. “These activities involve the use of active sound navigation and ranging (sonar) and explosives while employing marine species protective mitigation measures.”

Also from the Navy:

Littoral combat ship USS FreedomThis EIS/OEIS supports the issuance of federal regulatory permits and authorizations under the Marine Mammal Protection Act and the Endangered Species Act. The Navy previously completed an EIS/OEIS in December 2013 for training and testing activities occurring within the Hawaii-Southern California Training and Testing EIS/OEIS Study Area from 2013 to 2018. The Navy has updated this analysis by evaluating new, relevant information, such as more recent marine mammal density data and new scientific information, as appropriate. This updated EIS/OEIS will support future training and testing activities beginning in 2018.

Activists and environmentalists packed the Waiakea High School cafeteria for the 4th and final public meeting in Hawaii, and the only meeting held on the Big Island. Many individuals drove into Hilo from Kona in order to participate. They spoke, chanted, and even sang; but the message was the same. No more training and testing in the waters off Hawaii, testifiers declared.

NOTE: We were only able to record the first hour and 20 minutes of testimony. You can find the rest courtesy Camille Keawekane-Stafford in the video below.