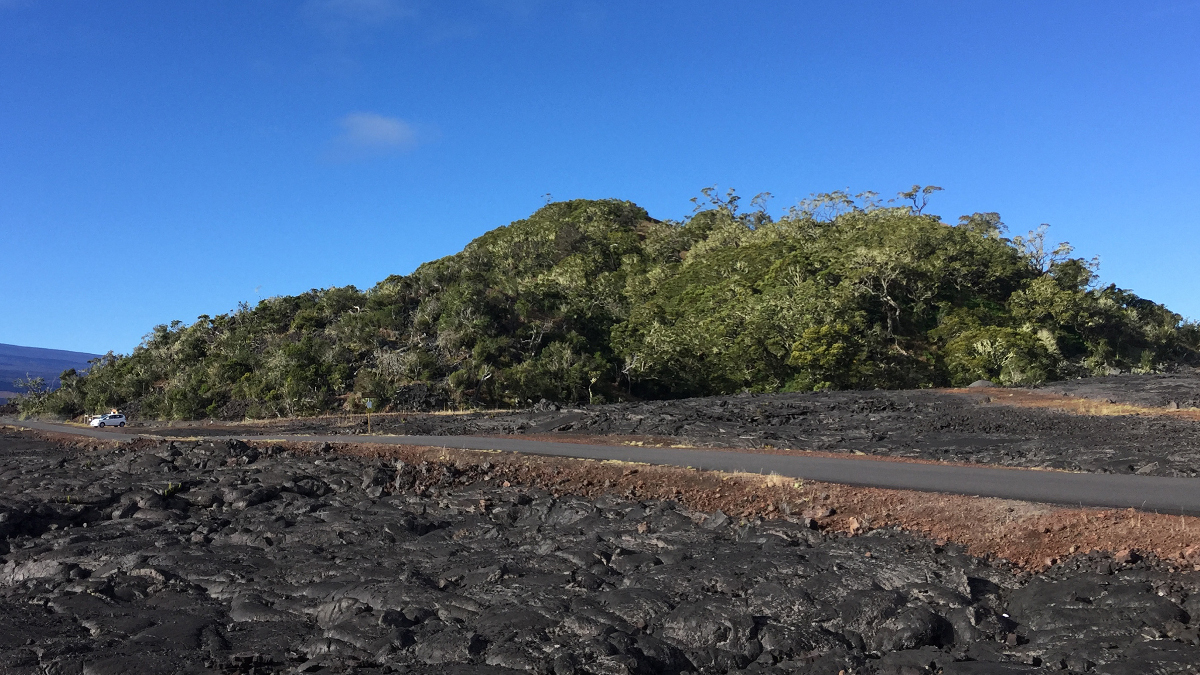 (BIVN) – Although the geology of Kilauea volcano gets most of the attention on Hawaii Island, scientists are showcasing the geology that surrounds Saddle Road in this week’s Volcano Watch article.

Route 200, the Daniel K. Inouye Highway, crosses Humu‘ula Saddle, which separates Mauna Kea and Mauna Loa, the two largest volcanoes on the Island of Hawaiʻi. This Saddle showcases outstanding volcanic geology and is easy to reach for “roadside geologists.”

For the first 19 miles (30.6 km), Highway 200 ascends almost a mile (1.6 km) above sea level through mostly young native forest. The road crosses lava flows and patches of ashy soil ranging in age from 150 to 4000 years old. Rainfall is so abundant here—up to nearly 300 inches (760 cm) per year—that vegetation covers most outcrops.

Around Milepost 19, Highway 200 emerges onto young-looking, lightly-vegetated ‘a‘ā lava from the 1855–1856 Mauna Loa eruption. This flow is one of seven that travelled from Mauna Loa toward Hilo in recorded history. The 1855–1856 eruption lasted a year and a half! Imagine the commuter’s nightmare were this to occur today.

Between Mileposts 19 and 20, tall trees occupy numerous kipuka growing on Punahoa pāhoehoe lava erupted from Mauna Loa 3100–3200 years ago. Near Milepost 21 the road drops into a kipuka floored by the 400-year-old Mauna Loa ‘Ᾱinahou ‘a‘ā flow.

Near Saddlehouse Road, the road rises onto Mauna Loa ‘a‘ā lava erupted in1935–1936. This flow was the first-ever in the United States that authorities tried to “manipulate” to protect property downslope. The U.S. Army Air Corps, advised by Thomas Jaggar, Director of the Hawaiian Volcano Observatory at the time, dropped 600-pound (272 kg) bombs on the active flow about ten miles (16 km) southwest of the intersection. The goal was to disrupt the lava channel, causing the flow to spread laterally rather than continue downhill. The impact was negligible.

On the right side of the highway just after Saddlehouse Road, the 1935–1936 lava is rumpled into a spectacular series of low compressional ridges (“lava ogives”). These features are easiest to spot in early morning or dusk light. Each ridge indicates that you are near the end of the flow, where the lava became too stiff to continue. The actual terminus is about two miles (3.2 km) away.

South of the road between Mileposts 22 and 23, a pullout marks the start of the Pu‘u ‘Ō‘ō Trail, which crosses a landscape of diverse kipuka and younger flows. Spectacular old-growth ōhiʽa and tree ferns appear in scattered groves. The trail, which used to continue all the way to Volcano ranchlands, now ends after four miles (6.4 km) at the edge of the 1984 flow, the youngest lava to head toward Hilo.

Past Milepost 22, road builders deliberately constructed Highway 200 atop the 1935–1936 āʽa flow. That’s because rubbly ‘a‘ā is much easier than solid pāhoehoe to grade.

Near Milepost 23, Highway 200 approaches the base of Mauna Kea. The lumpy, grassy landscape to the right of the road results from the eruption of hawaiite, a unique type of lava that is notably stiffer and richer in silica and potassium than Mauna Loa flows. The numerous upslope cones belong to the Pu‘uloa volcanic field, which last erupted about 4,600 years ago and was the source of the hawaiite. Pu‘uloa vents extend to the top of Mauna Kea.

A well-loved local landmark, Pu‘uhuluhulu, is at the crest of the Saddle. This densely-forested Mauna Kea cinder cone is entirely surrounded by younger Mauna Loa flows. An abandoned quarry at its eastern end exposes the cone’s interior, showing that sometime after eruption of loose, porous cinders, narrow dikes of basaltic lava worked their way into the edifice. The dike rock matches the chemistry of Mauna Loa’s lavas, suggesting that they intruded much later. But how and why they did remain a head-scratcher for geologists.

Near the northwestern foot of Pu‘uhuluhulu is a stone wall, built by hand in the late 19th century by local cattle ranchers. The 1935–1936 lava lapped around and overtopped the wall in places. Stunning inflation features illustrate that the flow inflated like rising bread crust on both sides of the wall after initially coming to rest against it.

Other interesting features may be discovered in the Humu‘ula Saddle, such as ancient dune fields, glacial deposits, and rocks from Earth’s deep interior. We’ve described only a few here, hopefully instilling a new appreciation for our spectacular ‘āina.