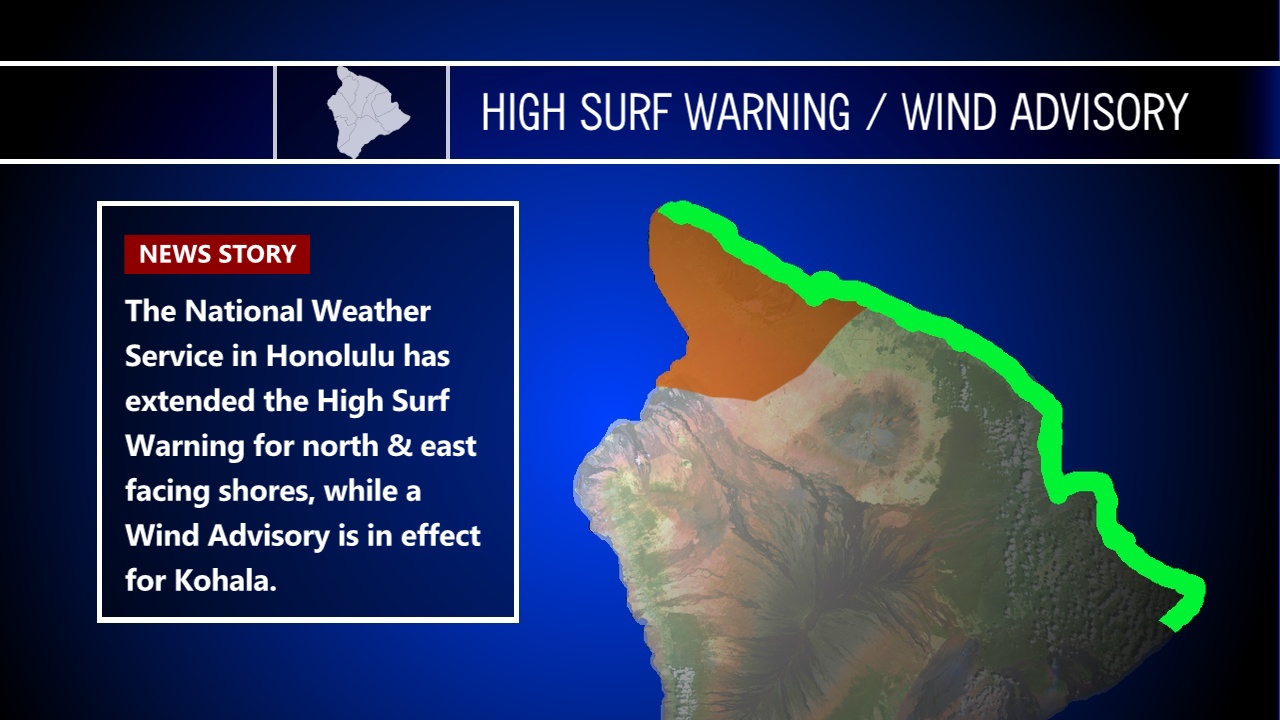 HAWAII ISLAND - The National Weather Service in Honolulu has extended the High Surf Warning for north & east facing shores, while a Wind Advisory is in effect for Kohala.

(BIVN) – Although the High Surf Warning has been replaced by a High Surf Advisory for the rest of the Hawaiian Islands, warning level surf continues to impact north and east facing shores of the Big Island.

A low pressure system over the northeast pacific generated a large north swell which continues to bring warning level impacts to the Big Island. Surf along the exposed smaller island shores has dropped to advisory levels. The north swell will continue to trend down overnight and Saturday. Strong trade winds will produce rough surf along east facing shores through the weekend.

North facing shores could see wave heights of 20 to 25 feet into this evening, forecasters say.

Due to the high surf, all county beach parks in Keaukaha remained closed. Kalanianaole Street in Keaukaha remains closed between Kolea and ‘Oe’oe Street. Ocean front residents and beachgoers are advised to be on alert for high and dangerous surf. As a precaution, boat owners and oceanfront residents should continue to take action to secure their property.

Meanwhile, a Wind Advisory is also in effect for the Kohala area of the Big Island. From the National Weather Service at 3:35 p.m. HST:

Strong and gusty northeast winds will continue across the State through the Holiday weekend. The island of Lanai, as well as leeward Kohala and the Kohala mountains on the Big Island will experience the strongest winds with gusts up to 50 mph.

An earlier Wind Advisory that also included North Kona and Upper Puna Districts has been discontinued. Civil defense said residents in the advisory areas should “take extra precautions to secure things that may be affected by the strong winds such as boats, canopies and outdoor holiday decorations.”