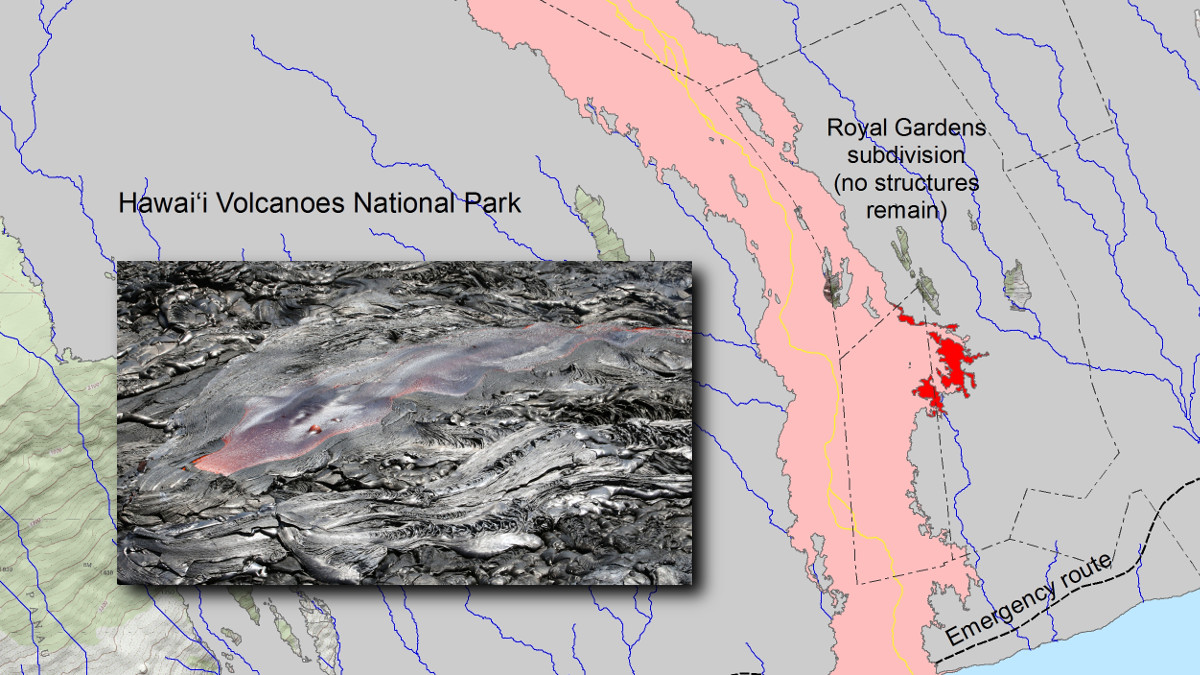 USGS: On Nov. 22, HVO geologists performed routine maintenance on Pu‘u ‘Ō‘ō webcams. This photo is taken on the north rim of Pu‘u ‘Ō‘ō looking south into the main crater, which is heavily fuming in the background.

(BIVN) – Changes at Pu‘u ‘Ō‘ō on the East Rift Zone of Kīlauea Volcano were recently documented by the USGS Hawaiian Volcano Observatory.

Although there are no significant changes in the summit or East Rift Zone eruptions, scientists charted some minor alterations to the 61g lava flow during a November 22 overflight.

There was no lava entering the ocean, nor breakouts on the delta. The USGS reported that the tiny tube breakout that started over the weekend, approximately half a mile from the emergency road, was weakly active Tuesday. 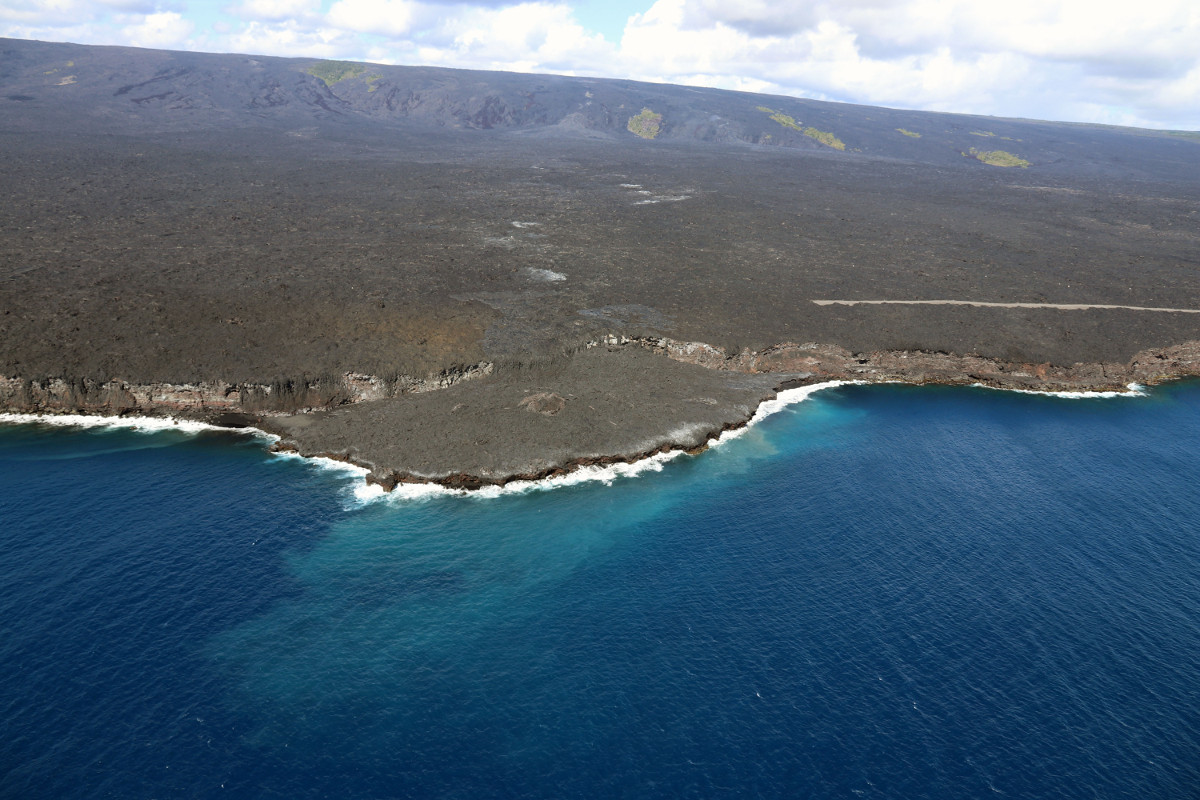 USGS: On Nov. 22 at Kīlauea Volcano’s episode 61g Kamokuna lava delta, there was no lava entering the ocean or breakouts on the delta. 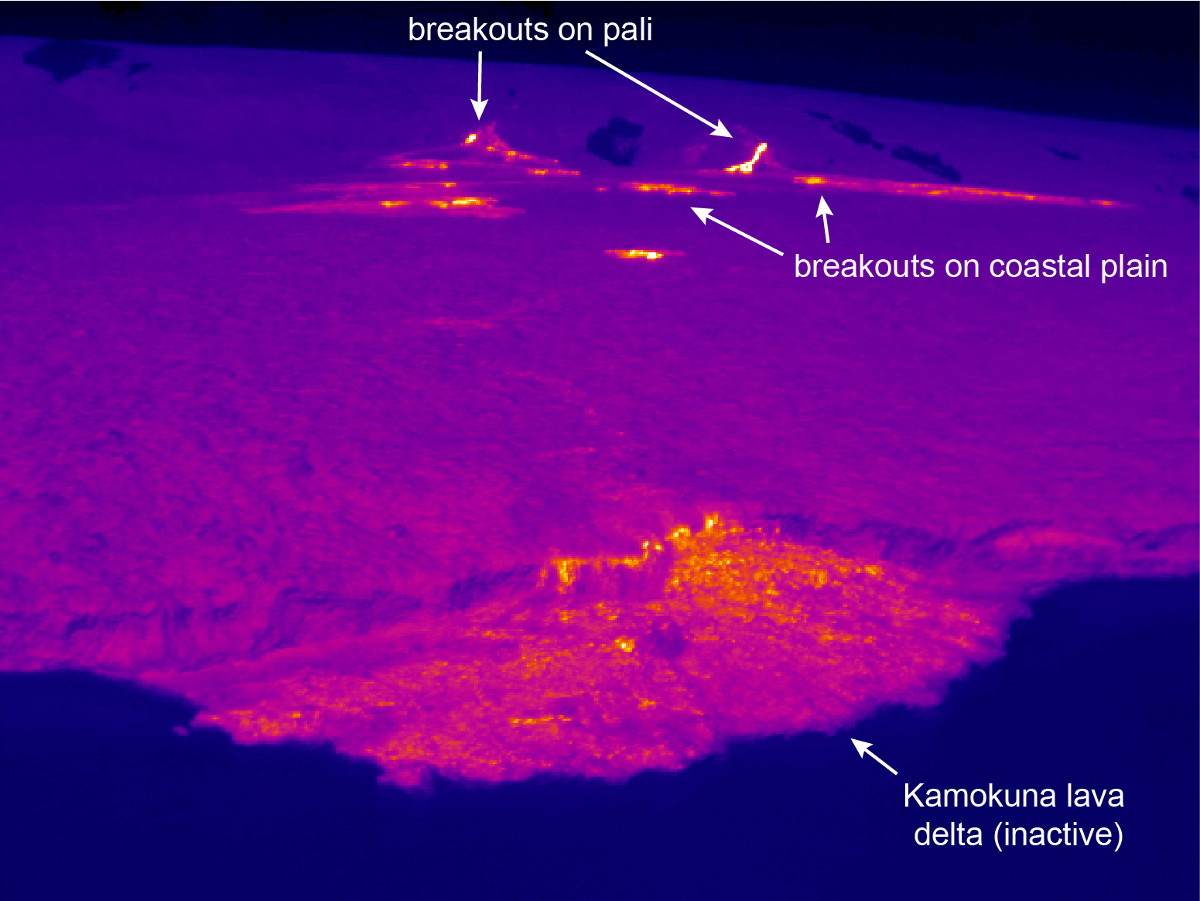 USGS: This thermal image shows the lack of active breakouts or lava streams on the Kamokuna lava delta, which has been inactive for several days. Farther upslope, scattered breakouts are active on the coastal plain and pali.

Closer to the base of the pali, scientists say there were more active surface flows, as well as on and above the pali. 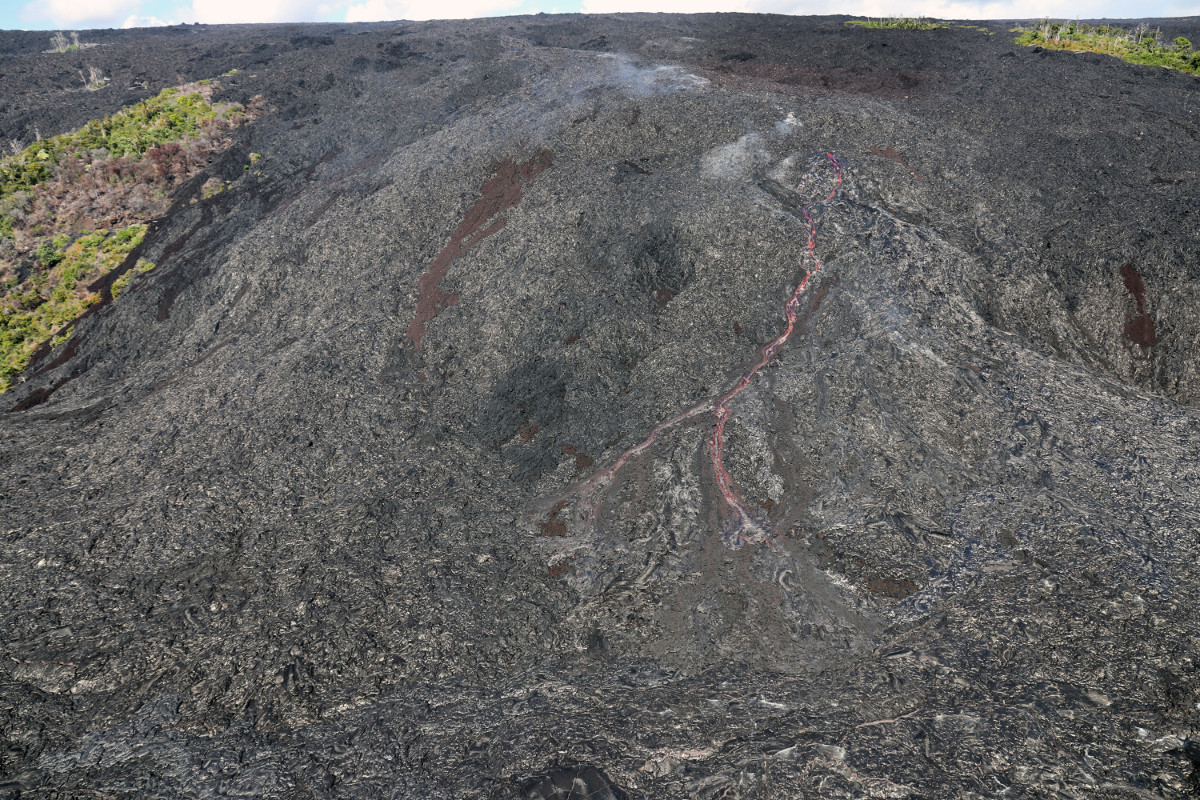 USGS: A channelized flow broke out on Pūlama Pali on Nov. 22 from the eastern tube (June 26 breakout). This flow quickly advanced down the steep part of the pali. 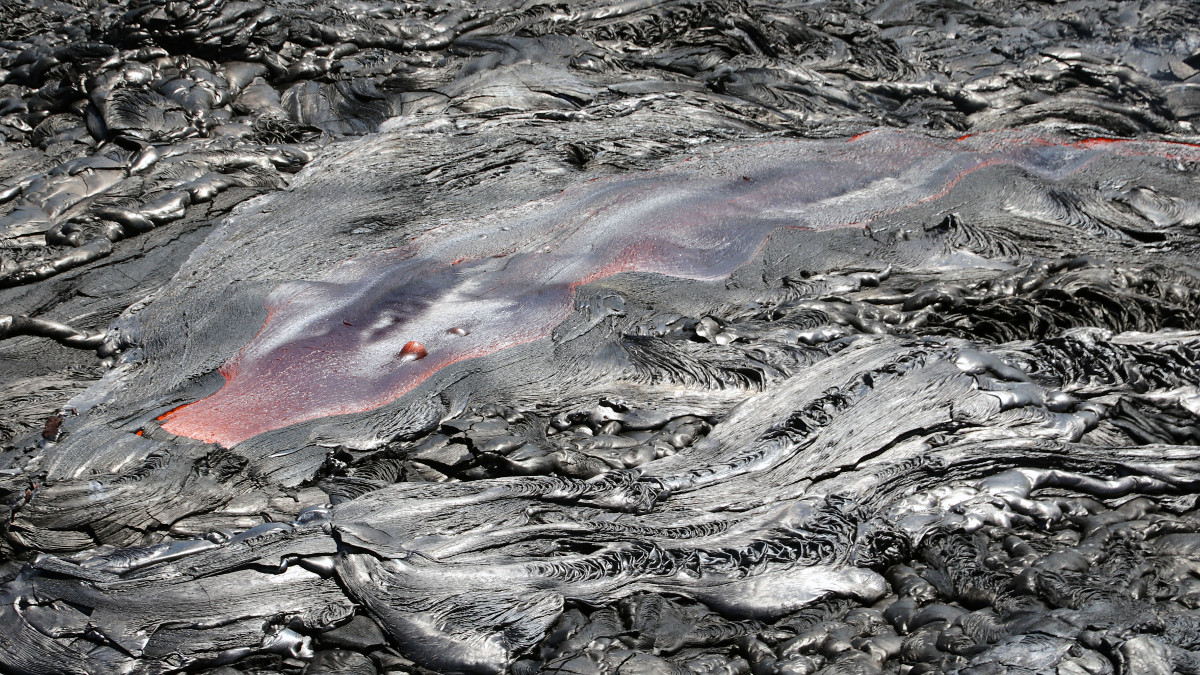 USGS: A telephoto view of the channelized breakout source on Pūlama Pali. While the fluid lava rushes downslope, gas escapes through bubbles at the surface (seen near the breakout point).

No significant changes were noted today at Puʻu ʻŌʻō. Webcam images over the past 24 hours show persistent glow at long-term sources within the crater and from a small lava pond on the west side of the crater, USGS said on Friday. Low rates of seismic activity and ground surface deformations are noted. The sulfur dioxide emission rate from the East Rift Zone vents has been steady over the past several months and remains significantly lower than the summit emission rate. 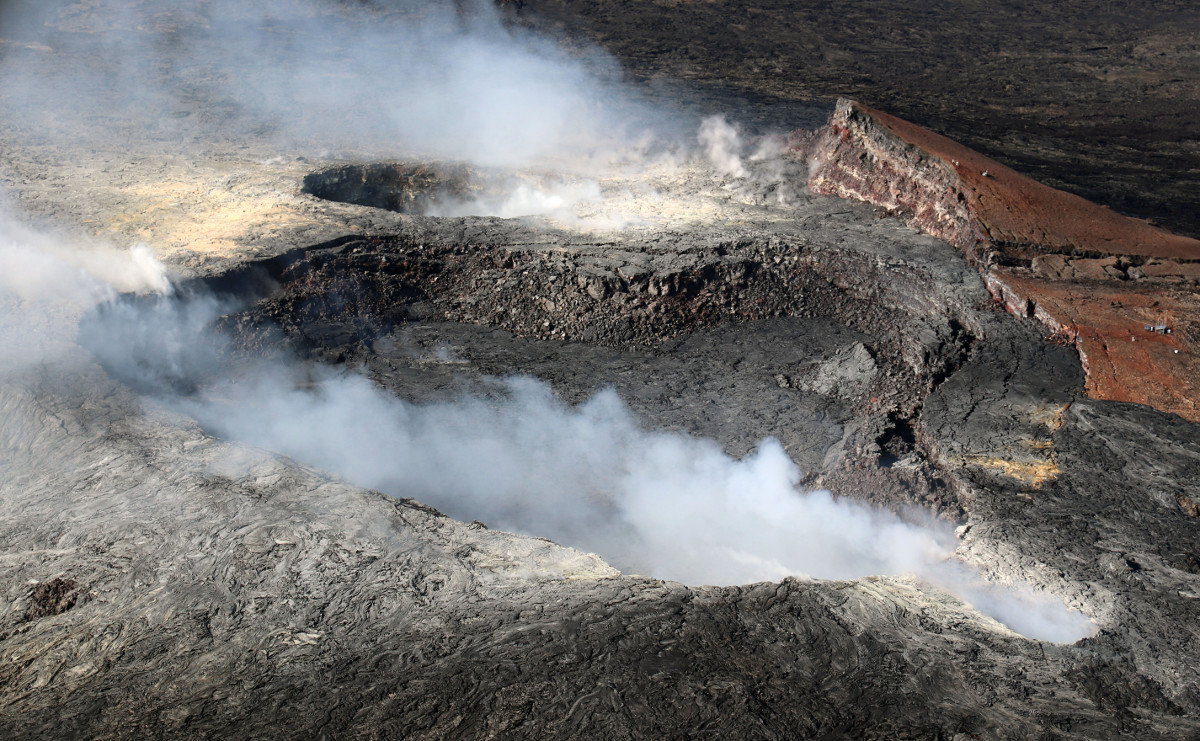 USGS: A view of Pu‘u ‘Ō‘ō Crater looking west, with the main crater in the center of the photo. In the background the west pit – which has an active lava pond inside – can be seen adjacent to the larger crater. The northeast spillway vent is in the lower right. 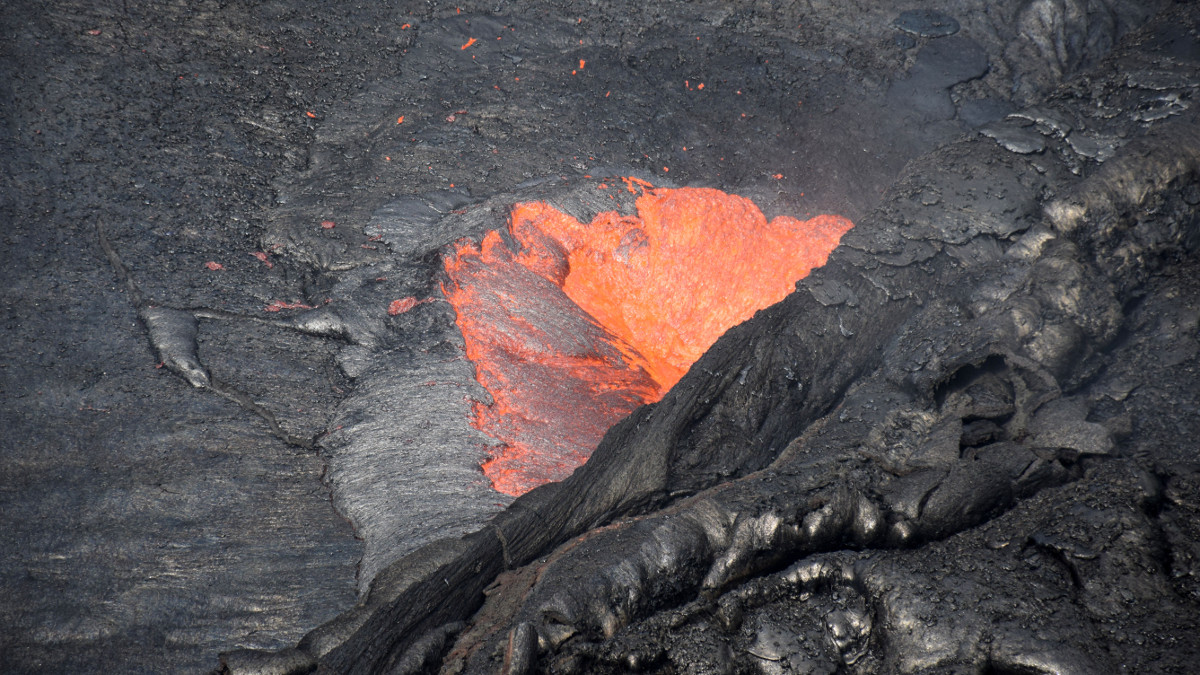 USGS: Telephoto view of one of the spattering sites on the west pit lava pond margin, in Pu‘u ‘Ō‘ō crater.

Two new maps were posted to the USGS HVO website on Friday, encapsulating the widening of the lava flow at its borders. A thermal map shows were the breakouts are on top the 61g flow field. 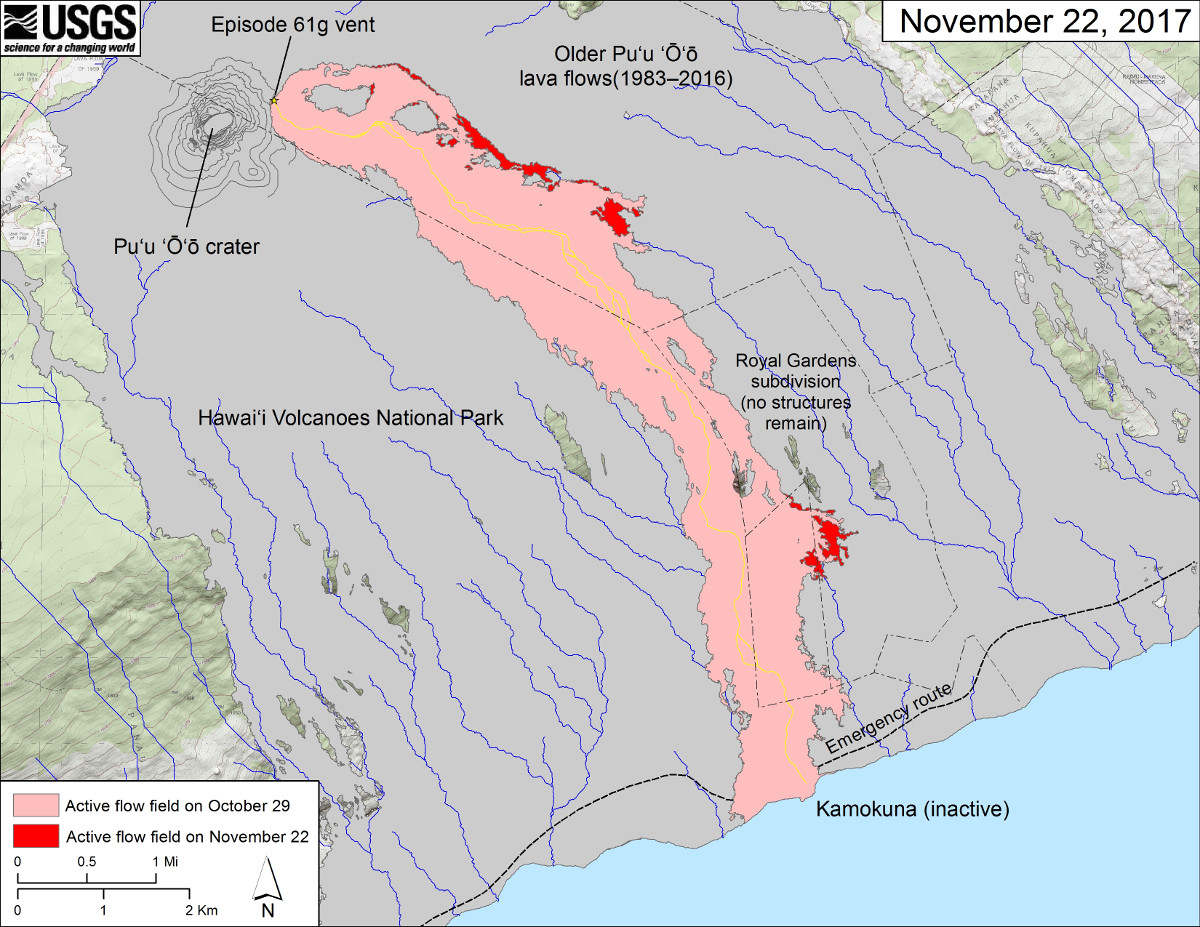 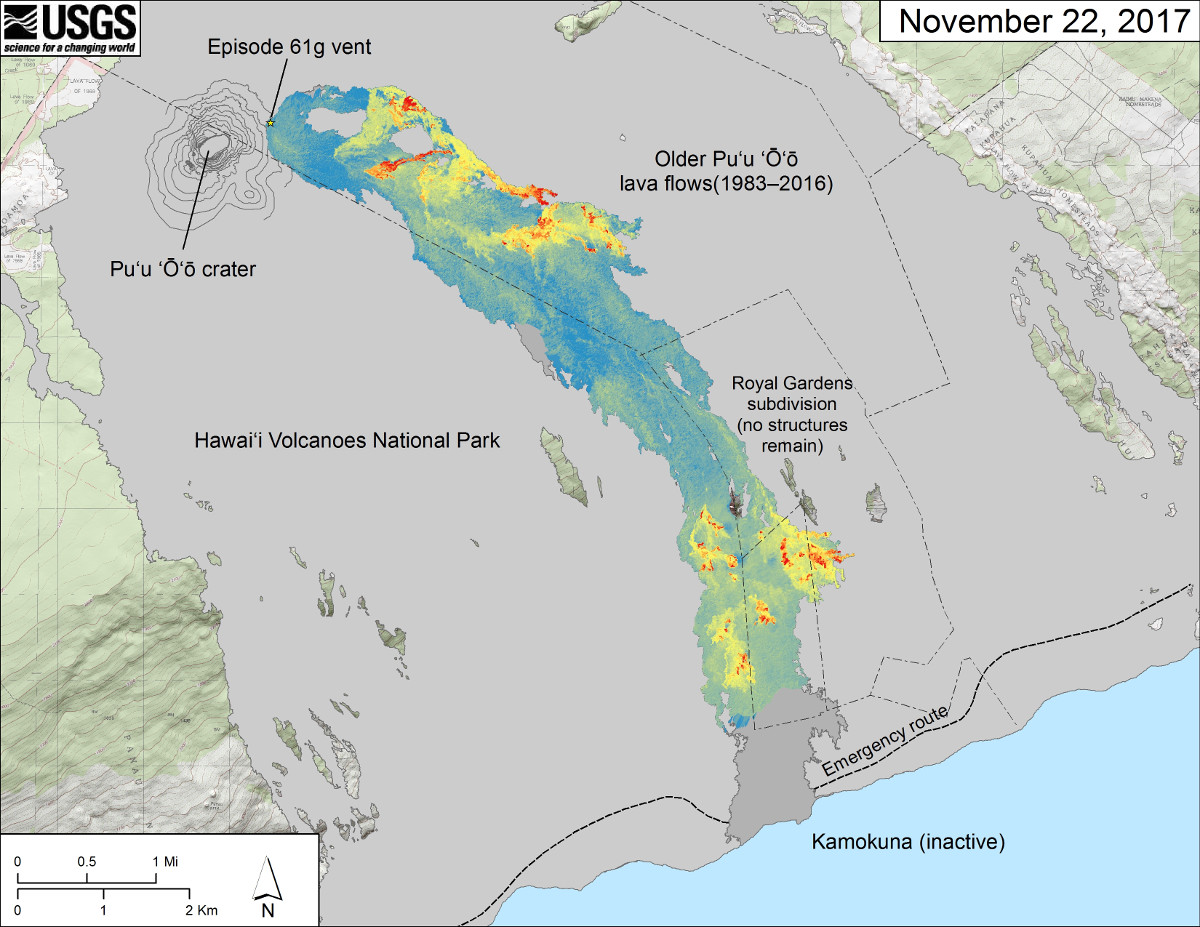