HONOLULU, Hawaii - At an An informational briefing, state lawmakers discussed recent findings regarding the traumatic October stranding on Kauai. 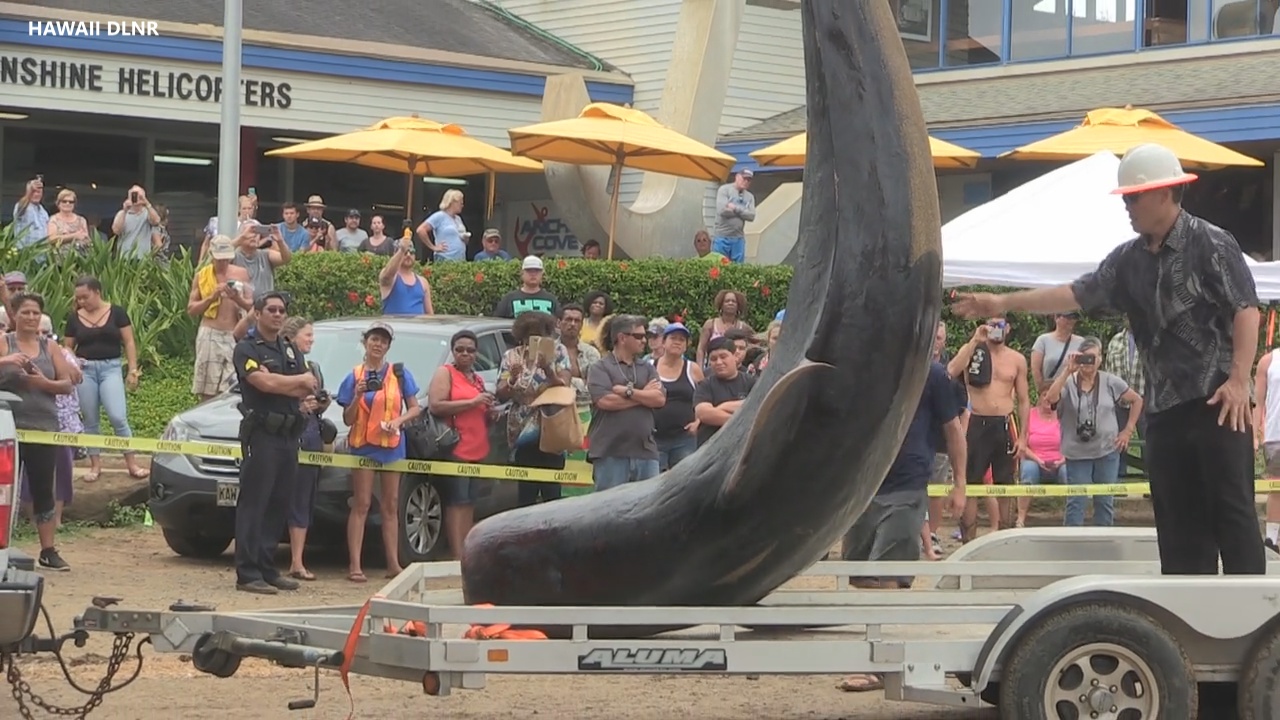 (BIVN) – An informational briefing was held at the State House on Tuesday concerning the recent whale stranding on Kauai.

17 pilot whales were washed up on Kauai’s southern shore in October. 5 ended up dying.

Traumatized residents wanted to know why it happened.

At a recent hearing held in Hilo, residents pointed the finger at the U.S. Navy, which is accepting public comment on an Environmental Impact Statement for training and sonar testing in Hawaiian waters.

During Tuesday’s briefing on Oahu, lawmakers discussed some of the findings regarding the stranding on Kauai.

State and federal agencies told the representatives that they are looking into any and all potential causes of the deaths of the five pilot whales.

The State House of Representatives summarized with this media release:

Honolulu, Hawaii – During a House of Representatives informational briefing today to discuss research conducted and findings regarding the stranding of 17 pilot whales on Kauai in October, state and federal agencies told lawmakers they are looking into rat poison and sonar as potential causes of the deaths of five whales.

“It’s important that we look into these type of stranding to see what effects human pesticides, debris and noise have on the wildlife in our oceans,” said Rep. Lee. “And to see what can be done to prevent this type of thing in the future.”

David Schofield, the Marine Mammal Health and Stranding Response Coordinator for NOAA Fisheries, Pacific Islands Region Office, said there has been an increase in strandings over time due to stress from pollutants in the oceans.

“What we use on the land ends up in the sea,” Schofield said.

Rep. Ing asked about the possible cause of this stranding.

“When marine mammals strand themselves it’s usually a signal that something in our environment is out of sync,” said Ing. “Hearing from experts provides valuable information as we decided how to address this issue and prevent further harm. We are confident that NOAA and the other agencies will work on finding a solution and also do so by respecting the native Hawaiian community’s rights to malama and repatriate the mammals after they have completed their work.”

Kristi West, a Research Scientist and an Affiliate Faculty member at the Hawaii Institute of Marine Biology, University of Hawaii at Manoa, said possible causes include sickness, social bonds, bio toxins, marine debris, tidal changes and noise that effect the animal’s inner ear such as sonar.

West, who directs necropsy and cause of death investigations when whales and dolphins strand throughout Hawaii, said tissue samples and the stomach content of the animals will be analyzed to help determine the cause of death for these animals.

West’s area of expertise is focused on understanding causes of mortality and what factors threaten the survival of the 20 different species of dolphins and whales found in Hawaiian waters.

Kauai Representative Dee Morikawa (Niihau, Lehua, Koloa, Waimea), who witnessed the stranding, asked if there could be any link between the pilot whale beaching and the recent dropping of rat poison on nearby Lehua Island.

“I want to make sure we have an agency we can trust looking into this and getting the correct information out,” Morikawa said. “I’m so suspicious there will be a cover up. It’s too coincidental that so soon after the rat poison is dropped, we have this stranding. These whales eat the squid that may have eaten the poison dropped in the ocean. That is what I suspect happened.”

West said she is also anxious to determine a cause of death, but it will take about six weeks to get test results back from the laboratories. The results will be shared with lawmakers, she said.

Rep. James Kunane Tokioka (Wailua Homelands, Hanamaulu, Lihue, Puhi, Old Koloa Town, Omao) asked if the squid and other food eaten by the whales will also be tested for poison. West said now that she is aware of the possibility of the rat poison be passed on by ingesting the squid, it will also be tested.

Tokioka asked if there was any evidence that the whales had been harmed from acoustic trauma from sonar.

Schofield said there is no evidence so far and that the U.S. Navy reported no training taking place using sonar within five miles and 24 hours of the stranding.

West said there is a population of about 19,500 pilot whales in the waters within 200 miles of the Hawaiian Islands and on average, one pilot whale dies from stranding a year.

In this case, 17 pilot whales were beached, five died and the rest returned to the open ocean.