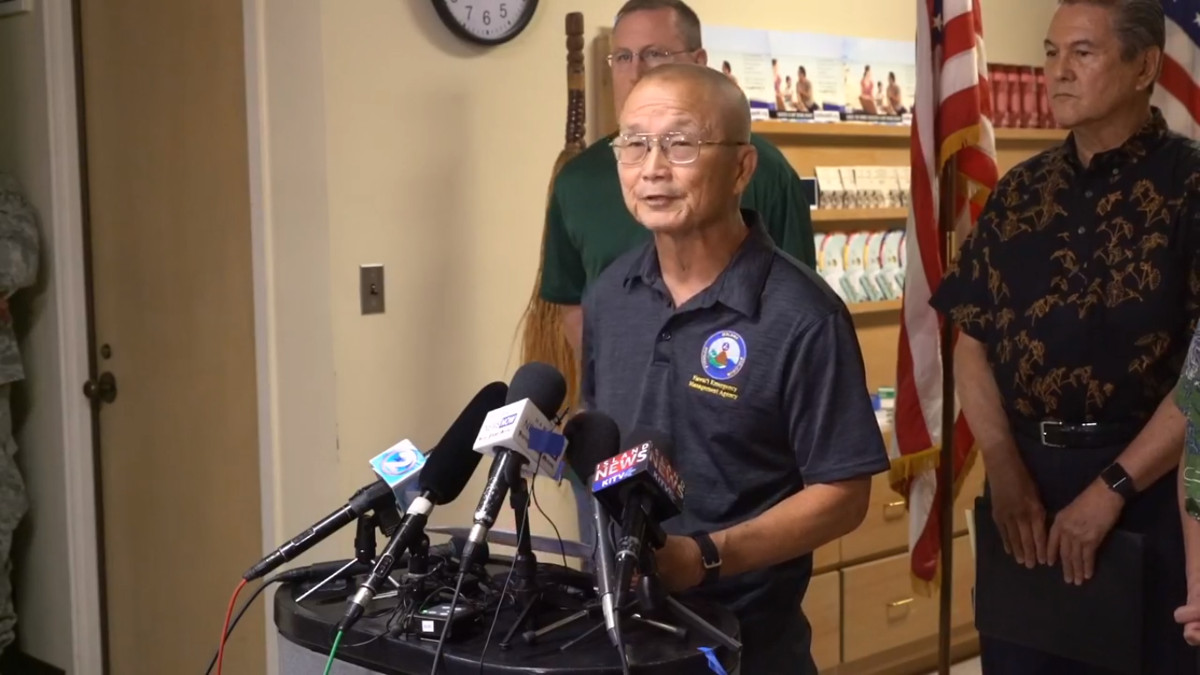 HONOLULU - Beset by criticism for its mistaken nuclear attack alert, the Hawaii Emergency Management Agency retraces its steps in an attempt to explain what went wrong on Saturday.

(BIVN) – Hawaii emergency officials say they have already taken measures to ensure that a false “ballistic missile threat” alert like the one that occurred Saturday morning does not happen again, amid mounting criticism from a nerve-shattered island population.

The Hawaii Emergency Management Agency confirmed at a 1 p.m. HST press conference that there “was no ballistic missile and that there were no computer hacks to the HI-EMA system. The cause of the false alarm was human error.”

Evidently the wrong button was pushed during a routine internal test, HI-EMA administrator Vern Miyagi said, accidentally triggering the Emergency Alert System and the Wireless Emergency Alert with a canned message: “BALLISTIC MISSILE THREAT INBOUND TO HAWAII. SEEK IMMEDIATE SHELTER. THIS IS NOT A DRILL”

It took HI-EMA 15 minutes to issue a correction – using only social media – and roughly 40 minutes for a corrected message to be issued over the Public Alert and Warning System. It took Governor David Ige an hour and a half to make “initial media notification” of the cancellation.

The state says it has “started a review of cancellation procedures to inform the public immediately if a cancellation is warranted.”

“We understand that false alarms such as this can erode public confidence in our emergency notification systems,” a state media release stated. ‘We understand the serious nature of the warning alert systems and the need to get this right 100% of the time.”

State officials took questions from media at the afternoon press conference, and released a timeline of events in order to explain how the mistake occurred. Miyagi took responsibility for what happened.

“I know first-hand how today’s false alarm affected all of us here in Hawaii, and I am sorry for the pain and confusion it caused. I, too, am extremely upset about this and am doing everything I can do to immediately improve our emergency management systems, procedures and staffing,” said Gov. David Ige. 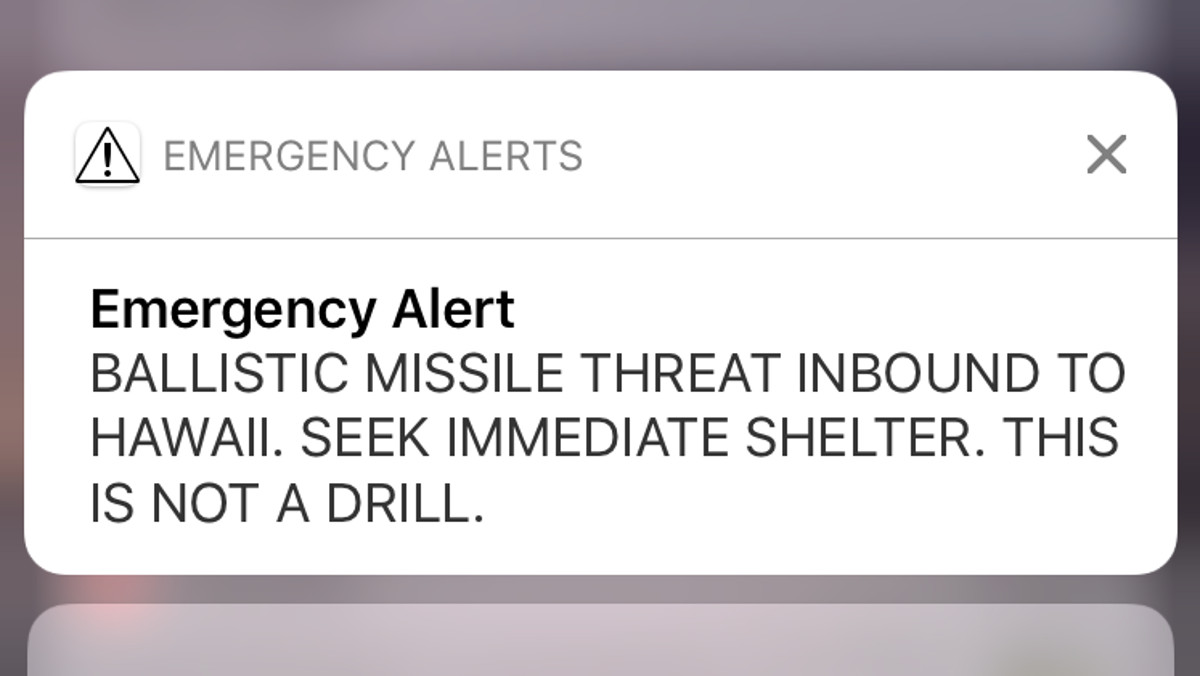 The Missile Attack alert as it appeared on cell phones across the State of Hawaii.

8:05 a.m. – According to the state: A routine internal test during a shift change was initiated. This was a test that involved the Emergency Alert System, the Wireless Emergency Alert, but no warning sirens.

8:07 a.m. – A warning test was triggered statewide by the State Warning Point, HI-EMA. Hawaii residents begin seeing the message on their cell phones and many report becoming panicked. The state is unable to send a follow up message through the same Emergency Alert System in order to cancel the first one.

8:10 a.m. – State Adjutant Maj. Gen. Joe Logan, validated with the U.S. Pacific Command that there was no missile launch. The Honolulu Police Department was notified of the false alarm by HI-EMA.

8:13 a.m. – State Warning Point issues a cancellation of the Civil Danger Warning Message, officials say. “This would have prevented the initial alert from being rebroadcast to phones that may not have received it yet,” HI-EMA expained. “For instance, if a phone was not on at 8:07 a.m., if someone was out of range and has since came into cell coverage (Hikers, Mariners, etc.) and/or people getting off a plane.”

NO missile threat to Hawaii.

8:20 a.m. – Hawaii County Mayor Harry Kim records an audio message for Hawaii County Civil Defense saying that “the alarm that you heard on the nuclear attack was a mistake by the state.”

8:24 a.m. – Governor Ige retweets HI-EMA’s cancellation notice. Rep. Tulsi Gabbard tweets out: “HAWAII – THIS IS A FALSE ALARM. THERE IS NO INCOMING MISSILE. THE ALERT WAS SENT OUT INADVERENTLY. I HAVE SPOKEN TO HAWAII OFFICIALS AND CONFIRMED THERE IS NO THREAT.”

HAWAII – THIS IS A FALSE ALARM. THERE IS NO INCOMING MISSILE. THE ALERT WAS SENT OUT INADVERENTLY. I HAVE SPOKEN TO HAWAII OFFICIALS AND CONFIRMED THERE IS NO THREAT. pic.twitter.com/hwRGct2aTa

8:45 a.m. – After getting authorization from FEMA Integral Public Alert and Warning System, HI-EMA issued a “Civil Emergency Message” remotely. The message, broadcast over radio and TV, says “False Alarm. There is no missile threat to Hawaii.” The Wireless Emergency Alert propagates a similar “false alarm” message.

9:39 a.m. – FCC Chair Ajit Pai tweets that the @FCC is “launching a full investigation into the false emergency alert that was sent to residents of Hawaii.”

The @FCC is launching a full investigation into the false emergency alert that was sent to residents of Hawaii.

According to the state, these following actions have already been undertaken:

“This morning’s false alert was regrettable and completely avoidable. There was no reason for the alert to be issued and the public needs to know that it was simply a mistake caused by human error. Our governor and the director of the Hawaii Emergency Management Agency have made strong public assurances that this type of mistake will never happen again, and we should all take that to heart.

“Already, procedures have been improved to ensure that an error of this magnitude is not repeated. The health and welfare of our residents and visitors is always the State of Hawaii’s top priority and no agency takes that responsibility more seriously than the Hawaii Emergency Management Agency.

“We have been in contact with our tourism stakeholders to inform them of today’s false alert and reassure them that Hawaii’s safety and security is unaffected by today’s unfortunate incident. There is no cause for travelers with trips already booked to Hawaii or considering a vacation in the islands to change their plans. Hawaii continues to be the safest, cleanest and most welcoming travel destination in the world and the alarm created today by the false alert does not change that at all.”

Legislators have now called for a joint Senate and House Committee informational briefing for Friday, January 19, 2018 at 10:00 a.m. to review operations of the Hawai‘i Emergency Management Agency and the procedures and protocols for the emergency management system.

“The safety of our residents and visitors is one of the most important responsibilities of our job as government officials,” said Sen. Donna Kim, Chair of the Committee on Government Operations. “I’m extremely upset at the terror and confusion caused by this false alarm. This false alert is detrimental to the integrity and trust of the emergency management system and we need to ensure that improvements are made to make sure this does not happen again.”

Governor David Ige released this statement later in the day:

“Today is a day most of us will never forget. A terrifying day when our worst nightmares appeared to become a reality. A day where we frantically grabbed what we could, tried to figure out how and where to shelter and protect ourselves and our ohana, said our “I love yous,” and prayed for peace.

I know firsthand how today’s false notification affected all of us here in Hawaii, and I am sorry for the pain and confusion it caused. I, too, am extremely upset about this and am doing everything I can to immediately improve our emergency management systems, procedures and staffing.

I have spent the morning with Gen. Logan, Hi-EMA Administrator Vern Miayagi and their teams and have directed that they make immediate changes. We are doing everything we possibly can to prevent this from happening again.

I encourage all of us to take stock, determine what we all can do better to be prepared in the future – as a state, county and in our own households. We must also do what we can to demand peace and a de-escalation with North Korea, so that warnings and sirens can become a thing of the past.”