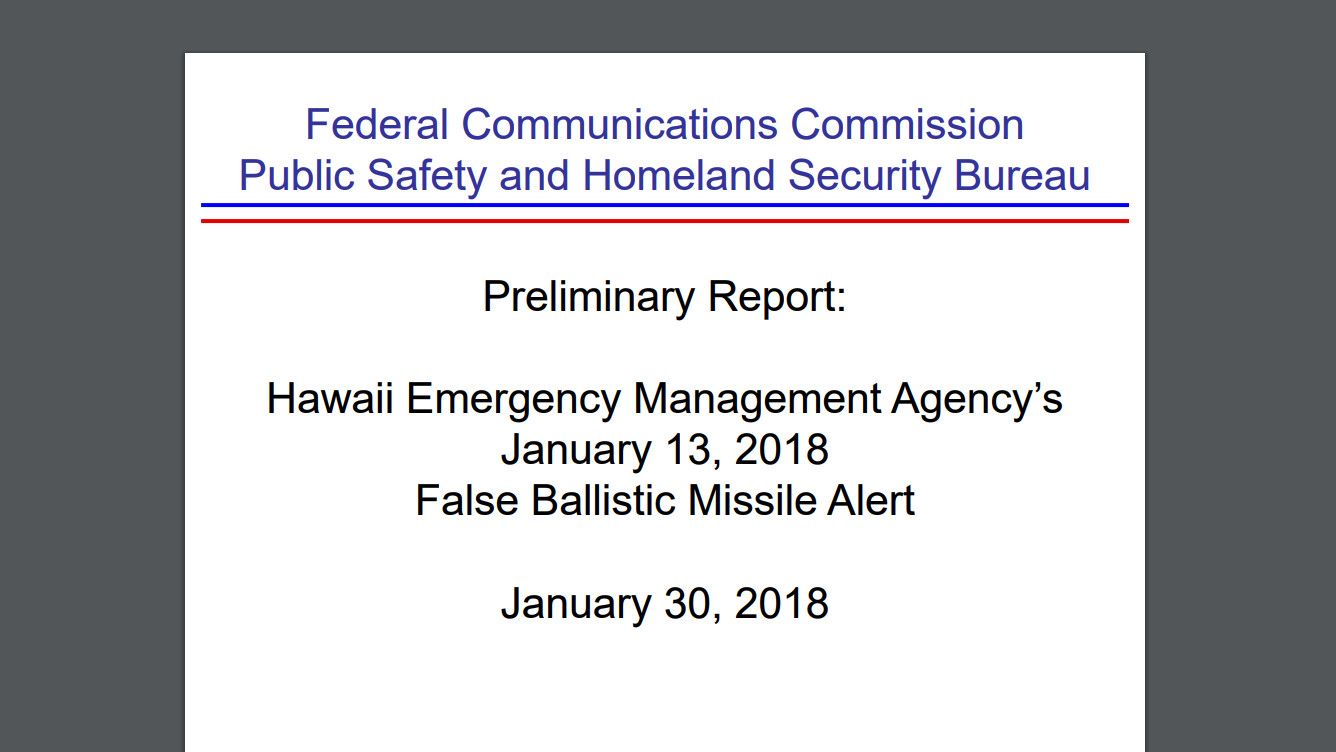 WASHINGTON - The Federal Communications Commission was presented with a preliminary report on the Hawaii False Emergency Alert, containing new revelations.

According to the remarks delivered during Tuesday’s open meeting of the Federal Communications Commission, James Wiley, the Attorney Advisor in the FCC’s Cybersecurity and Communications Reliability Division, noted that “because we’ve not been able to interview the day shift warning officer who transmitted the false alert, we’re not in a position to fully evaluate the credibility of their assertion that they believed there was an actual missile threat and intentionally sent the live alert.”

The FCC previously stated that the unidentified state emergency management employee who issued the mistaken threat message was not cooperating with federal investigators. However, Wiley reported today that “late last week the Hawaii Emergency Management Agency provided us with information from a written statement made by this individual shortly after the incident, which helped to improve our understanding of the events that led to the false alert.”

From Wiley’s remarks to the FCC:

In the early morning hours of January 13th, the Hawaii Emergency Management Agency’s midnight shift conducted a ballistic missile defense drill without incident. The supervisor of the midnight shift also decided to run a no-notice version of the drill during the transition to the day shift. The midnight shift supervisor specifically decided to drill at the shift change in order to help train the day shift’s warning officers for a ballistic missile defense scenario at a time when it would be challenging to properly respond.

According to the written statement, this day shift warning officer therefore believed that the missile threat was real. At 8:07 a.m., this officer responded by transmitting a live incoming ballistic missile alert to the State of Hawaii. The day shift warning officer used software to send the alert. Specifically, they selected the template for a live alert from a drop-down menu containing various live- and test- alert templates. The alert origination software then prompted the warning officer to confirm whether they wanted to send the message. The prompt read, “Are you sure that you want to send this Alert?” Other warning officers who heard the recording in the watch center report that they knew that the erroneous incoming message did not indicate a real missile threat, but was supposed to indicate the beginning of an exercise. Specifically, they heard the words: “exercise, exercise, exercise.” The day shift warning officer seated at the alert origination terminal, however, reported to the Hawaii Emergency Management Agency after the event their belief that this was a real emergency, so they clicked “yes” to transmit the alert. Because we’ve not been able to interview the day shift warning officer who transmitted the false alert, we’re not in a position to fully evaluate the credibility of their assertion that they believed there was an actual missile threat and intentionally sent the live alert (as opposed to believing that it was a drill and accidentally sending out the live alert). But it is worth noting that they accurately recalled after the event that the announcement did say “This is not a drill.”

The Cybersecurity and Communications Reliability Division offered these thoughts on the information gathered thus far:

With respect to inadequate safeguards, most importantly, there were no procedures in place to prevent a single person from mistakenly sending a missile alert to the State of Hawaii. While such an alert addressed a matter of the utmost gravity, there was no requirement in place for a warning officer to double check with a colleague or get signoff from a supervisor before sending such an alert. Additionally, the State of Hawaii appears to have been conducting an atypical number of no-notice drills, which heightened the potential for an error to occur. The Bureau’s investigation so far has revealed that while other emergency management agencies use no-notice drills under special circumstances, their common practice is to schedule drills in advance for a set date and time.

It is also troubling that Hawaii’s alert origination software did not differentiate between the testing environment and the live alert production environment. Hawaii’s alert origination software allowed users to send both live alerts and test alerts using the same interface, and the same log-in credentials, after clicking a button that simply confirmed “Are you sure you want to send this alert?” In other words, the confirmation prompt contained the same language, irrespective of whether the message was a test or an actual alert. The confirmation prompt also did not offer the officer another opportunity to review the text that is about to be sent. Further, Hawaii’s reliance on prepared templates stored in their alert origination software made it easy for a warning officer to click through the alert origination process without sufficient focus on the actual text of the alert message that he or she was about to send. In contrast, the Bureau’s investigation so far has revealed that common industry practice is to host the live alert production environment on a separate, user-selectable domain at the log-in screen, or through a separate application. Other alert origination software also appears to provide clear visual cues that distinguish the test environment from the live production environment, including the use of watermarks, color coding, and unique numbering Once the false alert was sent, the error was worsened by the delay in authoritatively correcting the misinformation. The Hawaii Emergency Management Agency had not anticipated the possibility of issuing a false alert and, as such, had failed to develop standard procedures for its response. It first sent out a correction using social media, rather than the same alerting systems that it used to transmit the false alert. Indeed, the agency was not immediately prepared to issue a correction using these systems. The agency also did not maintain redundant and effective means to communicate with key stakeholders during emergencies.