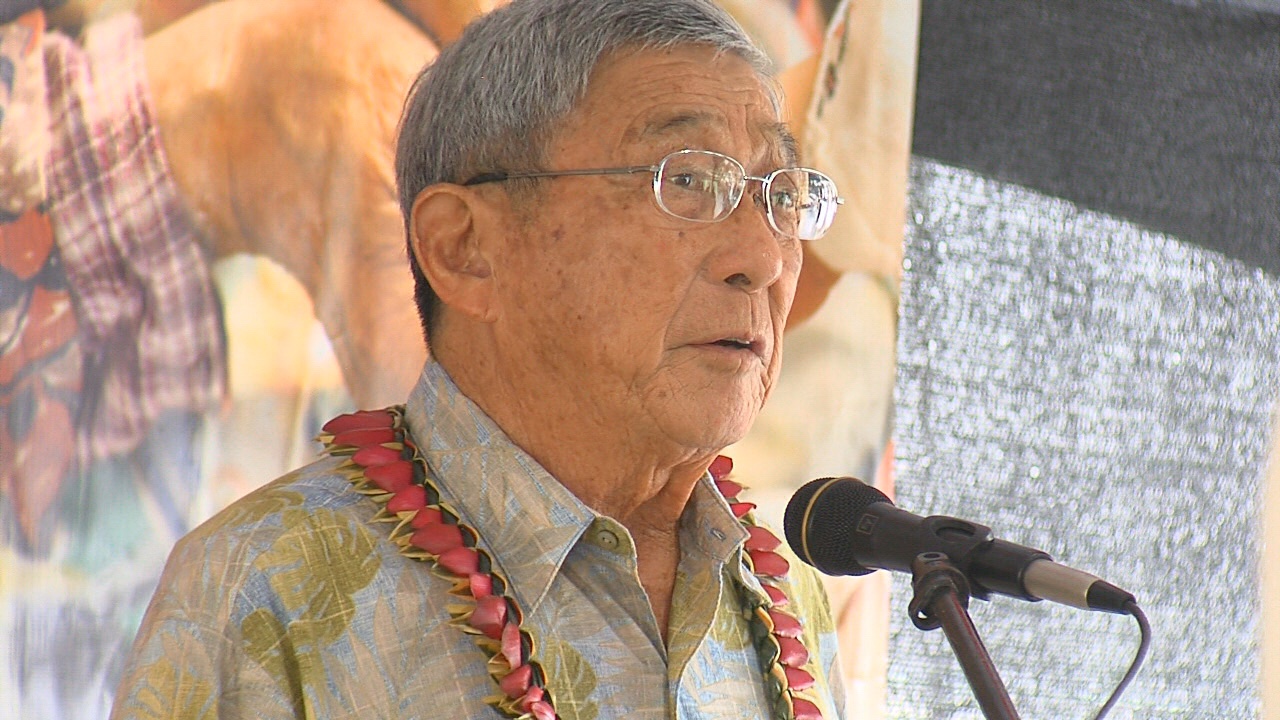 HILO, Hawaii - "The budget is balanced based on estimated revenues, but that does not mean it is a realistic budget," the mayor wrote.

(BIVN) – The month of March kicks off the budget season in Hawai‘i County, and the preliminary numbers are presenting a bleak picture for Big Island government finances.

The budget is nearly $25 million dollars, or 5.1% percent, larger than last year’s budget, thanks mostly to increases in salaries and post-employment benefits. Overall revenue increases, despite being bolstered by recent property and fuel tax increases, were not able to keep pace with needed expenditure increases, the county says.

“The impact on the budget is that many important items were not included or were reduced in the budget,” the sixth paragraph of Mayor Harry Kim’s message to the County Council reads. “Cuts had to be made. We had to look at our objectives and our ability to provide the core services of government. Contingency relief funds were eliminated, nonprofit grants were reduced by one-third to the required minimum, support for firework displays was eliminated, transfer stations will be closing on seven additional holidays, wastewater projects were deferred, Ho‘owaiwai community outreach was greatly reduced, as were the financial literacy training and the resources match program. In addition, tourism grants were reduced.”

The mayor said all departments, except Mass Transit, took cuts from the status quo budgets that they submitted. And even Mass Transit won’t be getting what it needs: 14 requested buses are not included in the budget, nor are other needs noted in the Mass Transit Master Plan.

The general excise tax surcharge proposed by the administration is not mentioned in the message, but based on previous finance department presentations to the council, the budget puts additional pressure on councilmembers to consider the tax increase. The bill to create the GET surcharge was postponed the last time it was brought before the council for consideration.

Here is Mayor Kim’s full budget message to the council:

As required by the Hawai‘i County Charter, submitted with this message is the proposed operating budget for the County of Hawai‘i for the fiscal year ending June 30, 2019. This balanced budget includes estimated revenues and appropriations of $515,710,662, and includes the operations of eleven of the County’s special funds as well as the General Fund.

This proposed FY 2018-19 budget is $24,892,085 or 5.1 percent larger than the FY 2017-18 budget. This budget reflects $12.7 million in additional salaries, wages and employee benefit expenses. Increased salaries and wages are primarily a result of collective bargaining. Fringe benefit increases were a result of higher retirement contributions, health benefits and post-employment benefits, for both our current employees and our retirees. Other significant increases are additional expenditures in the Highway Fund to help improve our roads and transit system, as well as increased costs in the Solid Waste and Housing funds.

The impact on the budget is that many important items were not included or were reduced in the budget. Cuts had to be made. We had to look at our objectives and our ability to provide the core services of government. Contingency relief funds were eliminated, nonprofit grants were reduced by one-third to the required minimum, support for firework displays was eliminated, transfer stations will be closing on seven additional holidays, wastewater projects were deferred, Ho‘owaiwai community outreach was greatly reduced, as were the financial literacy training and the resources match program. In addition, tourism grants were reduced. All departments, except Mass Transit took cuts from the status quo budgets that they submitted.

In addition to the cuts noted above, significant needs for each department could not be funded due to insufficient funds. Mass Transit currently rents an average of seven buses each day to meet the basic needs of the system. Mass Transit will never meet their goal of improving transportation mobility for the public, including service for the mobility impaired, and making riding public transportation easier and more desirable, without buses that are dependable and safe. The fourteen buses that Mass Transit has requested are not included in the budget. In addition, the other needs noted in the Mass Transit Master Plan are not funded in the budget.

The Police Department’s goal to protect life and property and serve the community cannot be fully met without the 7 additional supervisory positions that were requested, to provide a captain in each district, as well as to add one officer to each watch in Ka‘u and Puna (five additional officers for each district).

Funding for our roads continues to be a priority. The goal is to repave each mile of road once every 30 years, yet at our current pace we are only paving each mile of road once every 69 years. The additional fuel tax revenue will help greatly with improving this, but there is still not enough to allow us to do the larger road projects that are also needed, such as the Ane Keohokalole Extension to Ka‘immani Drive.

All of these needs are critical to our community and not included in our budget. As required by Hawai‘i County Charter, two percent of real property tax collections go to the Public Access, Open Space and Natural Resources Preservation (PONC) fund. These monies are utilized to purchase lands or easements for public access, open space and natural resources preservation. We currently have the highest percentage in the state going towards this purpose. The next highest county contributes only one percent. Currently $6.3 million dollars is directed to this fund in the proposed budget. While maintaining precious lands on our island is important, this is a significant amount of money that goes towards this use that could not be used for our critical needs noted above.

The following table describes the budgeted expenditures for FY 2017-18 and the proposed budget for FY 2018-19 for each fund: 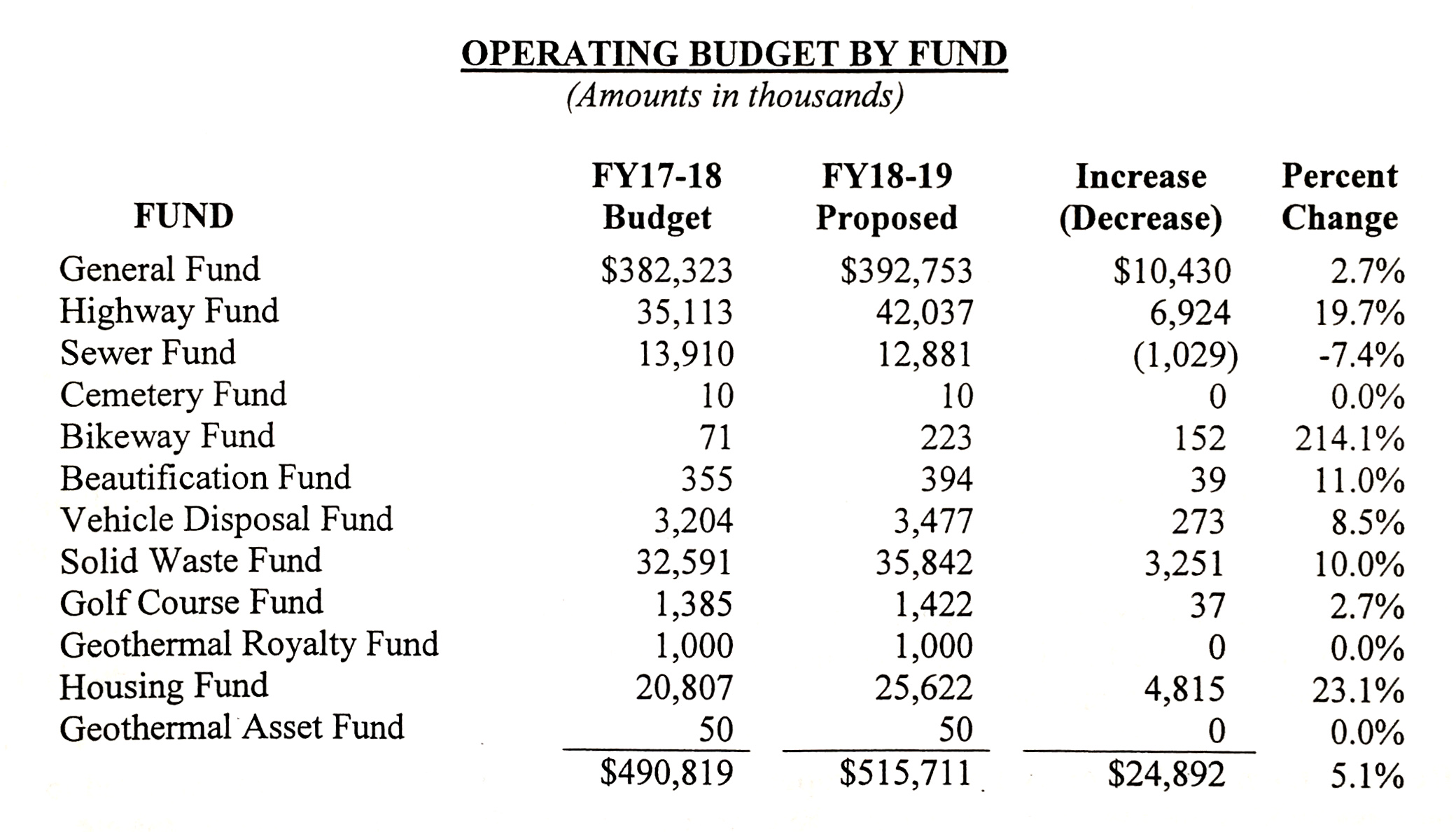 The following table presents a summary of projected FY 2018-19 revenues from various sources and the changes from the current budget: 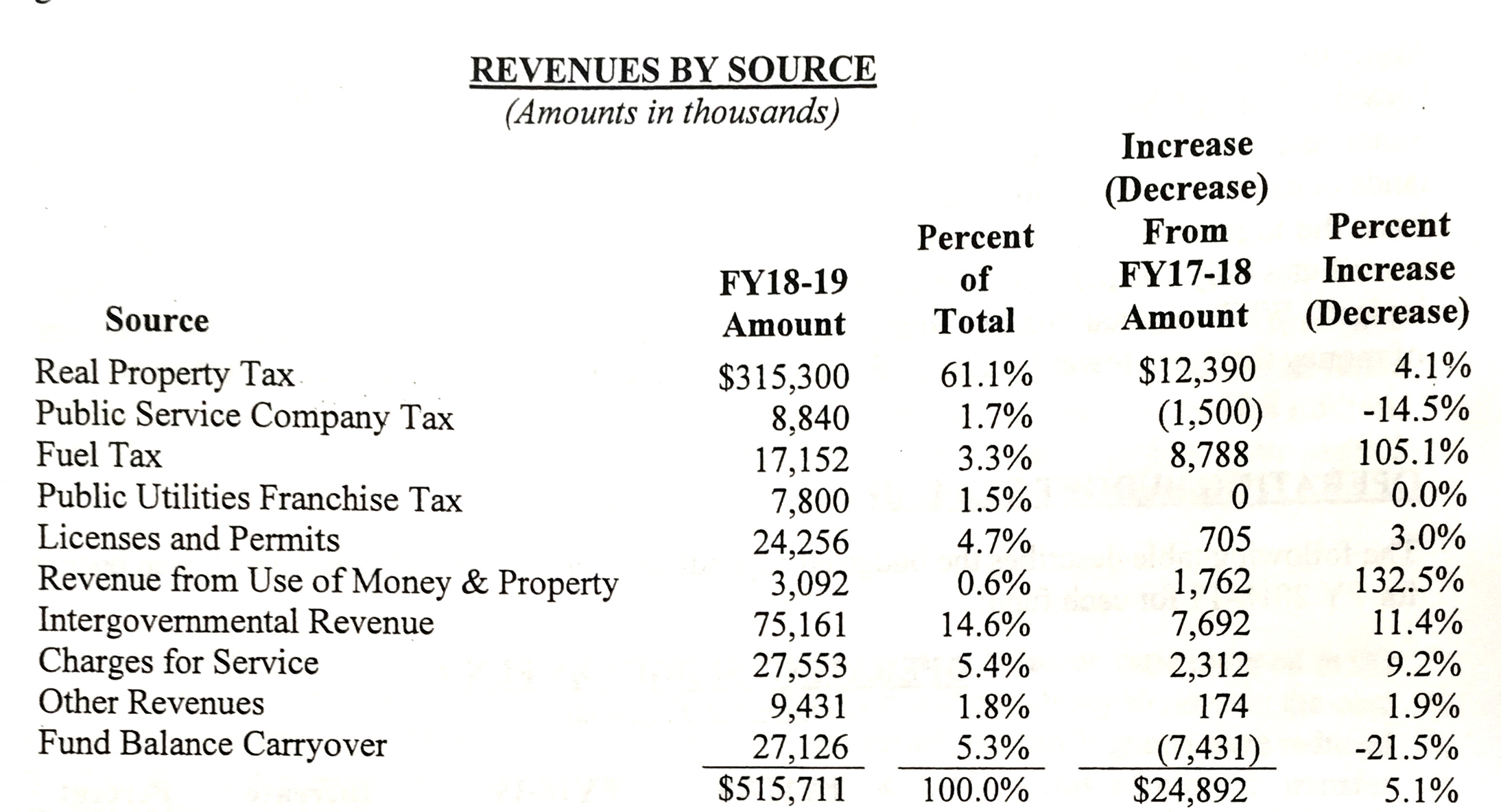 Real Property Tax. Real property tax revenues are expected to increase by 4.1%, or $12.4 million, due to new construction and an increase in taxable values.

Public Service Company Tax. Decreased revenues for these companies are expected to result in a decrease of $1.5 million, a reduction of 14.5% in public service company tax revenue.

Revenue from the Use of Money and Property. Housing Program Rent Income is expected to increase by $1.3 million, related to income generated at the Ulu Wini and Hale Kikaha projects.

Intergovernmental Revenue. Increases in grant revenues of about $7.7 million reflect those grants we are aware of at this time. Included above, is the change in the Housing Choice Voucher Program that is expected to increase by $3.5 million in the coming year.

Fund Balance Carryover. This budget reflects $7.4 million less in carryover savings from the current year operations of all funds.

The following table presents a summary of projected FY 2018-19 exenditures from various sources and the changes from the current budget: 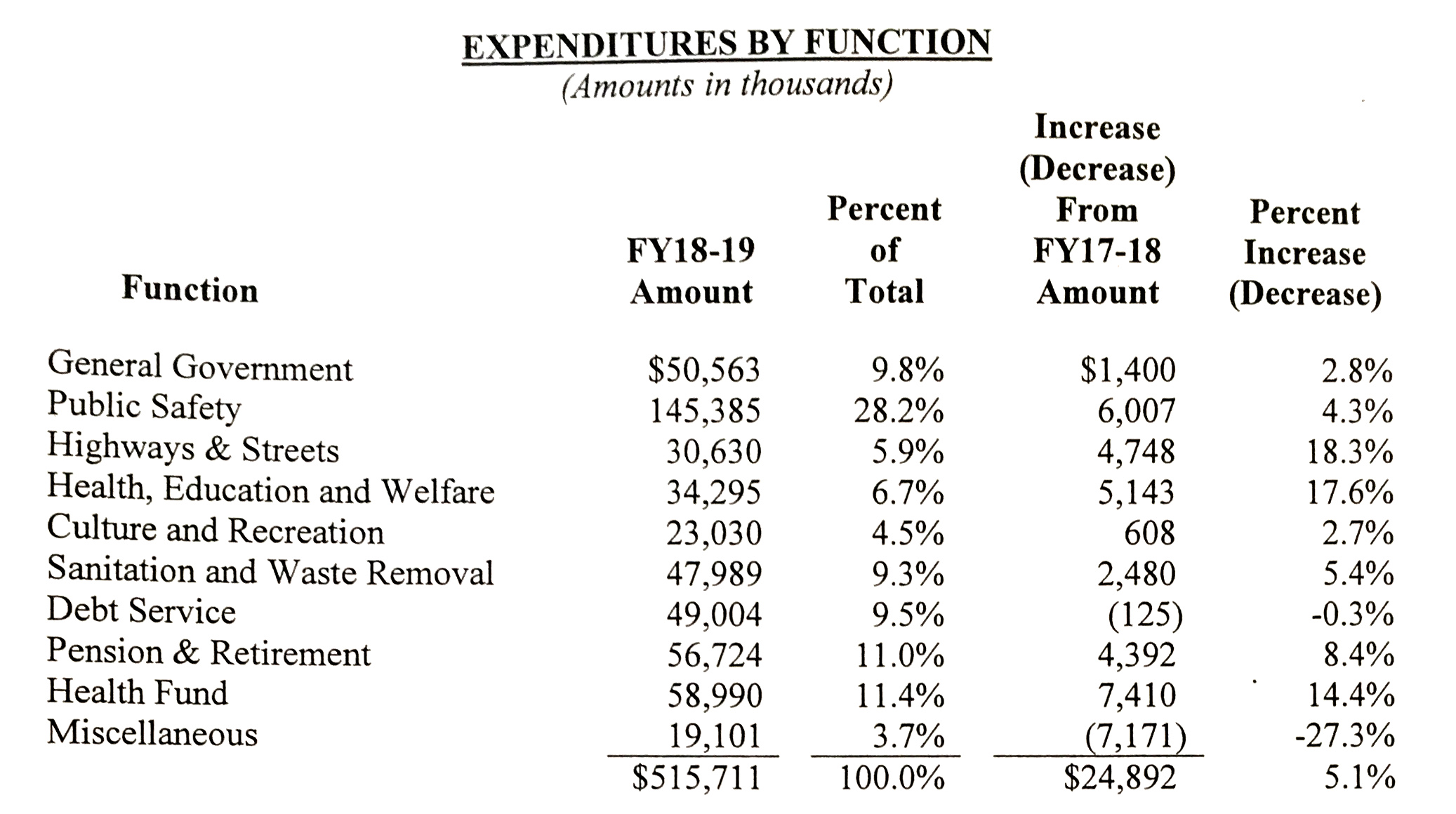 Salaries and wages increased in all areas due to new collective bargaining agreements with all eight bargaining units. Seven of the eight agreements have been finalized, while the last bargaining unit is awaiting the arbitration decision. Savings were achieved throughout the budget as the result of cuts made by the departments in their operating accounts and the decision to delay hiring and equipment purchases in some areas.

This proposed budget represents our departments’ best efforts, given current funding constraints, to meet the needs of our residents in a timely and responsible fashion, while striving to maintain the level of services our residents deserve. As our econom continues its gradual recovery, we are committed to continuing investment in infrastructure, public safety, and creating safer communities.

These investments are critical to the future of our Hawai‘i Island. We look forward to working closely with the Hawai‘i County Council as we prepare a responsible budget to meet the needs of those we serve.