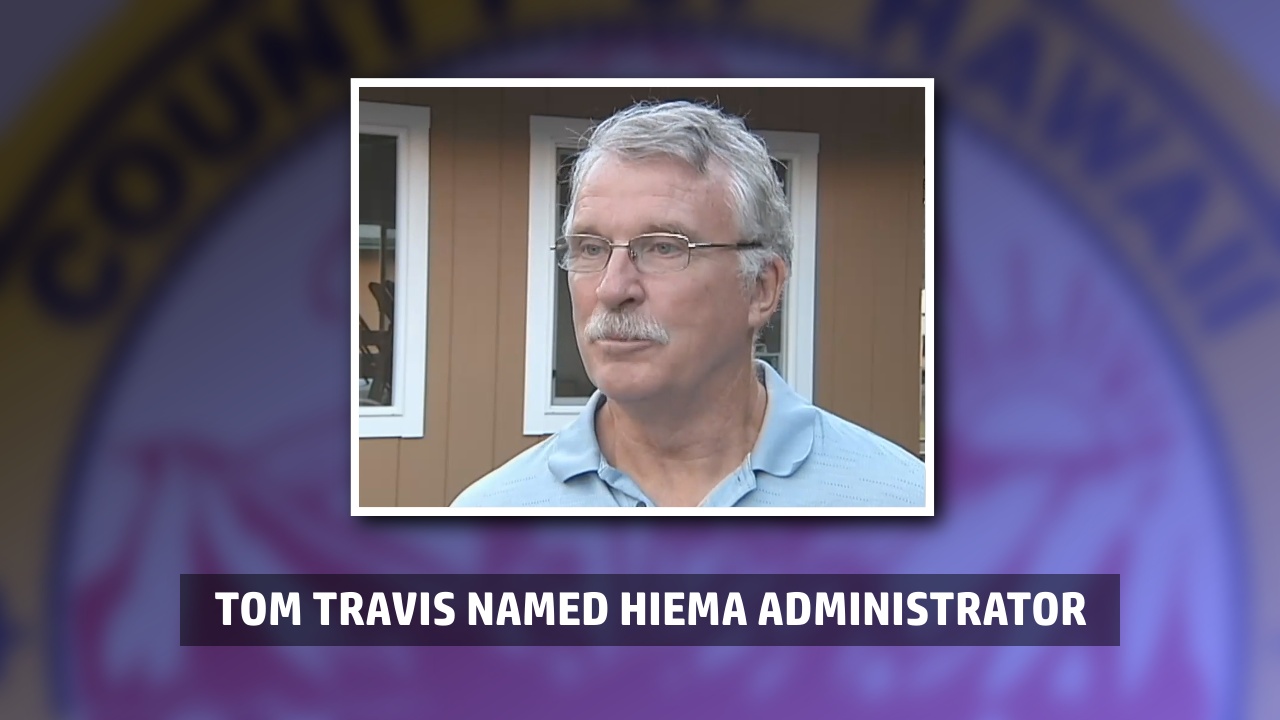 Travis, a former resident of Puna, was once a national security analyst and the contributing author and senior editor of foundational studies on Operation Iraqi Freedom and the U.S. Government response to Hurricane Katrina. Travis replaces Interim Administrator Brigadier General Moses Kaoiwi Jr., who took over after previous administrator Vern Miyagi resigned in the wake of the embarrassing false missile alert that was issued by a HI-EMA employee on January 13.

Today is Travis’ first official day in the position. Brig. Gen Kaoiwi will remain in his role of Interim Administrator to ensure a smooth transition.

“I am pleased and honored to accept the position of Administrator of the Hawaii Emergency Management Agency,” Travis said in a media release, “and grateful to Maj. Gen. Logan and Governor Ige for giving me this opportunity. I look forward to guiding the agency in building our capacity to respond to disasters and enhancing public trust. I also want to acknowledge the hard work of those who came before me in fostering an agency with great people and strong potential.”

Without saying any names, Mayor Kim talked about his recommendation for the vacated HI-EMA position during a February 20 news conference on O‘ahu. Kim was among seven core team members selected to help the state deduce the reasons for the false alert in January.

“I recommended someone. Lives on the mainland now,” Kim told reporters. “I called him… and I don’t know if I’m violating any process here. I don’t think I am, because this is an appointing position. I think this guy is great, when I called him up I said ‘I think we really could use your help. Would you consider coming here, so I can refer your name?’ And he needed a day and a night, talked to his wife about moving back from Arizona to here. And he called to say that he would. At which I submitted in a reference.”

At the press conference, Kim said his unnamed recommendation lived for a while on the Big Island, and “has done this kind of work in regards to review. For example, he did a review about Katrina. I think, the review of Iraq. I mean, huge things.”

In today’s media release, Maj. Gen. Logan praised Travis’s qualifications to “lead he agency in a period of rebuilding.”

“Mr. Travis has proven himself a strategic thinker and strong leader,” Logan said. “Throughout his career, both military and civilian, he has brought to bear a clear vision of the path to effective performance and quality results. I trust him to deliver the same results for HI-EMA and our state.”

Travis is a graduate of the U.S. Naval Academy and most recently resided in Tucson, Arizona.

He lived in Kapoho-area of Puna from 2011 to 2016, where he became heavily involved with Puna Pono Alliance, scrutinizing the Puna Geothermal Venture venting that occurred on the day Hurricane / Tropical Storm Iselle whipped the district in August 2014. Travis and Mayor Kim, who at that time did not hold office, appeared together at many community meetings held to address the fallout from the situation.

Travis also served on various submarines at Pearl Harbor from 1977 to 1991. After retiring from the U.S. Navy, Travis worked as an Assistant Director at the Joint Advanced Warfighting Program, Institute for Defense Analyses and most recently as the Studies Director, Joint Center for Operational Analysis, U.S. Joint Staff.

Travis was selected from a pool of ten candidates to head the Hawaii Emergency Management Agency, one of six divisions and offices within the State of Hawaii, Department of Defense, the state says.

Meanwhile, the discussion about the false alert issued on January 13 is not over. A U.S. Senate field hearing is set for Thursday, April 5 at the East-West Center.

U.S. Senator Brian Schatz (D-Hawai‘i), a ranking member of the Senate Subcommittee on Communications, Technology, Innovation, and the Internet, will convene the hearing titled “Hawai‘i False Missile Alert: What Happened and What Should We Do Next?” at 10:00 a.m.

The field hearing, which Schatz requested in January, will focus specifically on the failure of the Hawai‘i emergency alert system and explore options to improve alerts to ensure public safety. “This hearing is about moving forward and fixing the emergency alert system,” Senator Schatz said. “By bringing together state and federal officials, we can understand what happened, what resources are needed to make it right, and how we can improve the system overall.”

Hilo’s Chris Leonard, the President & Legislative Chair of the Hawai‘i Association of Broadcasters, Inc., is slated to appear on one of the panels.