HAWAII VOLCANOES NATIONAL PARK - The volcanic activity that began in Halema‘uma‘u with an explosion on March 19 has lasted for a decade. 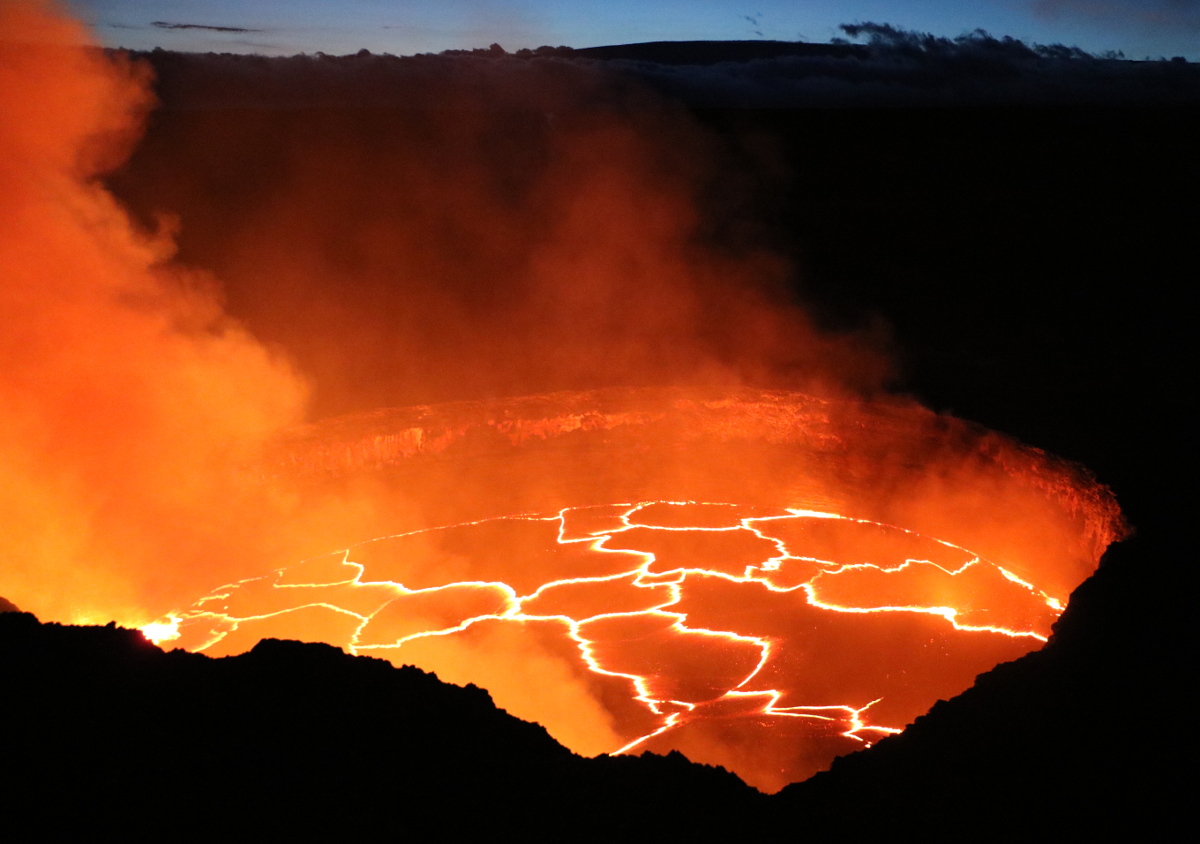 (BIVN) – Ten years ago today, the peaceful summit of Kilauea volcano awoke with an explosion at Halema‘uma‘u crater, beginning what has become the summit eruption we see today.

The eruption was not a threat to nearby residents, however the increase in volcanic air pollution, or vog, has had an impact, especially in the districts of Ka‘ū and Kona.

Scientists and volcano enthusiasts watched the glowing crater as it slowly grew larger. The decade of changes in Halema‘uma‘u were detailed in the most recent USGS HVO Volcano Watch article:

A little more than ten years ago, conditions around Kīlauea Volcano’s summit were much different than today. The caldera floor was open to the public, and the air above it was normally clear. Halema‘uma‘u was an impressive sight, but peacefully in repose.

That quiet phase at Kīlauea’s summit ended abruptly in 2008, ushering in a new era of lava lake activity that continues today. Let’s review the past decade of this summit eruption.

After several months of increased seismic tremor and gas emissions, there was a small explosion in Halema‘uma‘u on March 19, 2008. The explosion marked the opening of a new crater, informally called the “Overlook crater.” During the remainder of 2008, several more explosions deposited spatter around Halema‘uma‘u, and the Overlook crater enlarged through collapses of its rim.

During 2009, small lava lakes were sometimes active deep within the Overlook crater. But since early 2010, the lava lake has been continuously present, steadily growing and rising higher.

The rise was interrupted on March 5, 2011, when the lava lake briefly drained away due to the Kamoamoa eruption on Kīlauea’s East Rift Zone.

The lava lake stabilized in 2012, rose to a higher level in 2013, and remained stable in 2014 and early 2015. In April 2015, the lava lake rose abruptly and briefly overflowed, spilling lava onto the floor of Halema‘uma‘u. High lake levels in 2016 allowed lava to be frequently observed from public viewing areas in Hawaiʻi Volcanoes National Park, but a gradual drop in 2017 has made direct viewing of the lake less common over the past year.

The lava lake activity in 2018 is similar to that during the previous several years—relatively steady—and there are no signs that the summit eruption is slowing down.

Halema‘uma‘u now hosts one of the two largest lava lakes on Earth. It is likely the largest, but this cannot be said with complete certainty, as regular measurements are not available from the closest contender—Nyiragongo volcano in the Democratic Republic of the Congo.

Most persistent lava lakes are difficult to access, either due to geographic location (for example, Erebus in Antarctica) or political instability (for example, Nyiragongo). The size and accessibility of the Halema‘uma‘u lava lake, as well as the existing network of monitoring instruments, make it one of the premier locations to study lava lake behavior.

USGS Hawaiian Volcano Observatory scientists, along with collaborators from other institutions, are engaged in research to understand how the lava lake works and what it can tell us about the behavior and hazards of Kīlauea. For instance, we have learned that the lake rises and falls in concert with changes in summit ground tilt. This tells us that the lake responds to the pressure of the magma chamber, so the lake level can be used like a pressure gauge.

The lake also fluctuates in concert with the lava pond at Pu‘u ‘Ō‘ō on Kīlauea’s East Rift Zone, illustrating the hydraulic connection between the two eruption sites. Lava chemistry at the two sites is also similar, adding further evidence of a close connection.

Another important finding deals with the nature of small explosions that occur at the lava lake from time to time. HVO webcams revealed that the explosions are triggered by rockfalls from the Overlook crater rim impacting the lake surface. This observation is further evidence that the lava lake is very gassy, akin to lava foam. Rocks falling into this gas-rich, frothy lava triggers violent releases of gas that sends spatter flying.

While the summit eruption has benefitted science, it comes with many challenges, including persistent volcanic air pollution (vog) resulting from elevated sulfur dioxide gas emissions from the lava lake. Vog impacts the entire State at times, but the Ka‘ū and Kona districts on the Island of Hawai‘i have been particularly hard hit.

Kīlauea has a history of long-lasting summit eruptions, but it remains to be seen if the current eruption will go on for another decade. The past few years of stable activity suggest that the summit lava lake is likely to continue into the near future. However long it lasts, HVO will continue to study this awe-inspiring, unique feature to discover what more it can reveal about the volcano.