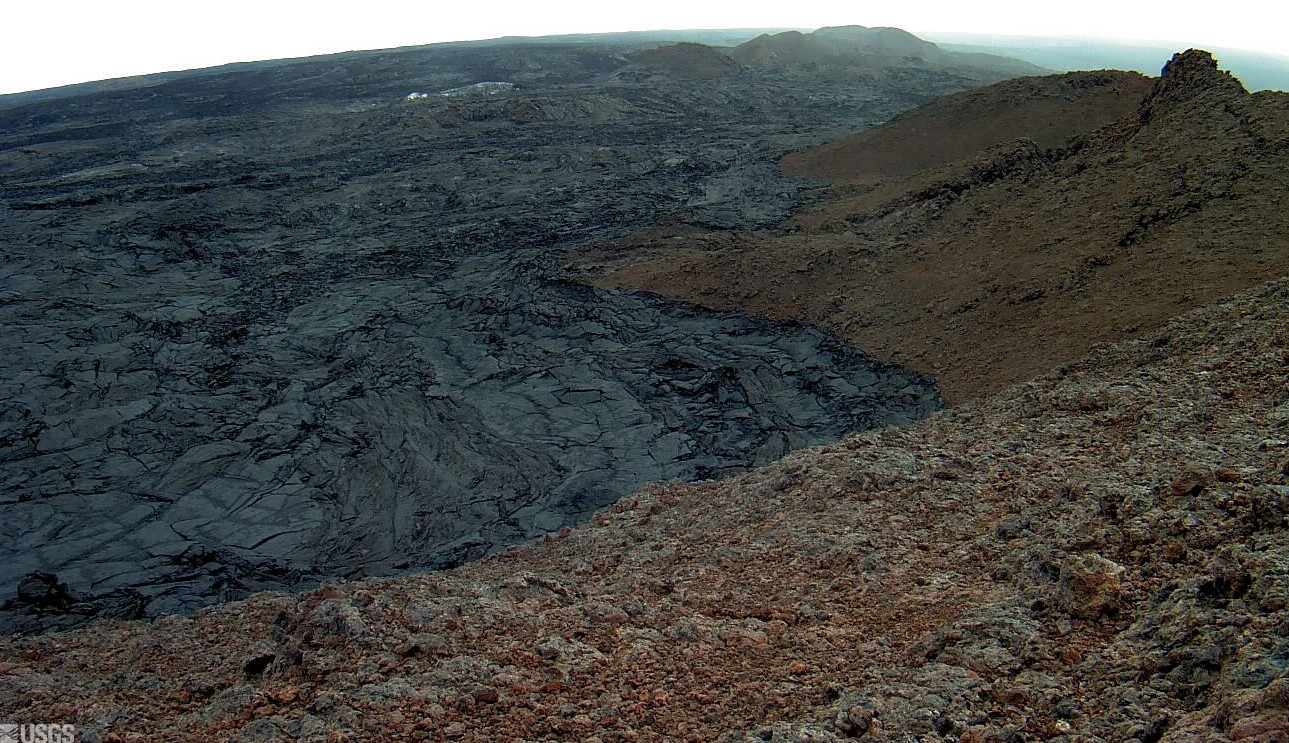 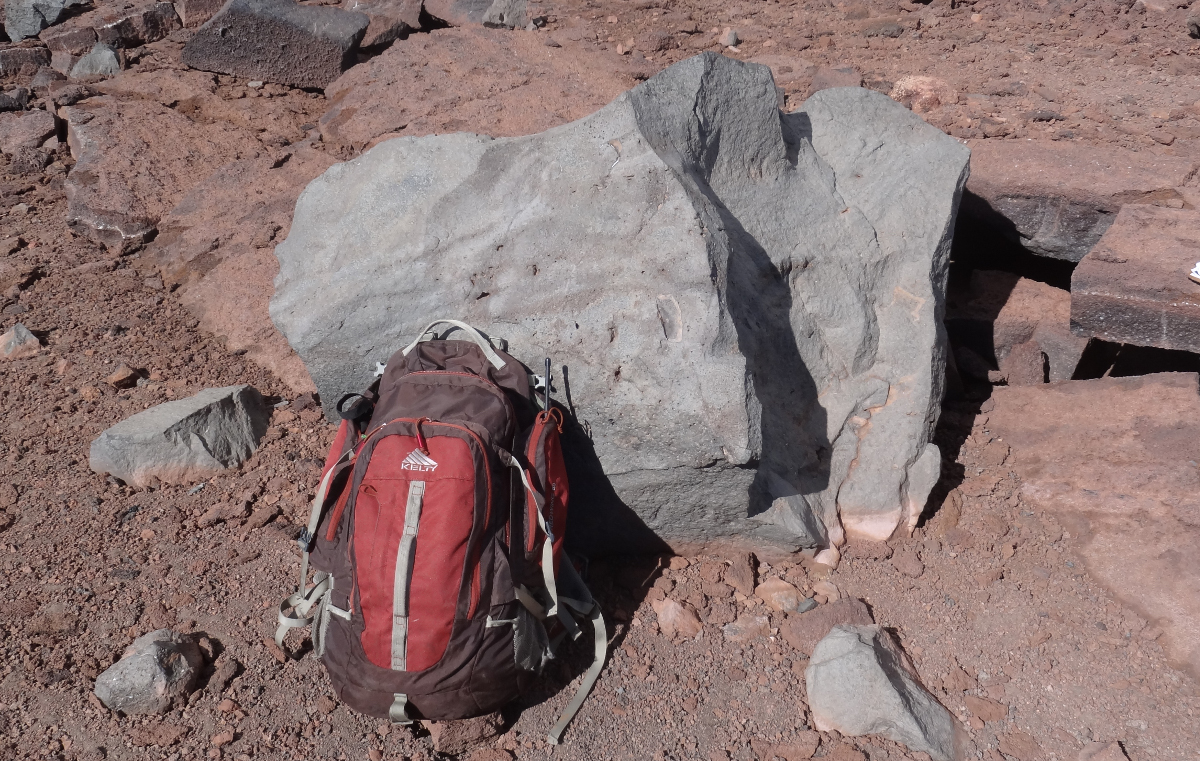 This light gray block of rock (backpack for scale) is part of the approximately 830-year-old explosion deposit on the northwest rim of Moku‘āweoweo, the summit caldera of Mauna Loa. USGS photo by F.A. Trusdell.

(BIVN) – In this week’s Volcano Watch article, part of an ongoing series written by U.S. Geological Survey Hawaiian Volcano Observatory scientists and affiliates, geologists ponder the explosive eruptions at the summit of Mauna Loa. When did they occur?

Three deposits from explosive eruptions at the summit of Mauna Loa are located west, northwest, and east of Moku‘āweoweo, the volcano’s summit caldera. In map view, these deposits are fan-shaped. Along the ʻĀinapō Trail, 2.8 to 3.5 km (1.7 to 2.2 mi) southeast of the caldera, several kīpuka expose a fourth distinct explosive deposit.

Hawaiian volcanoes usually produce lava flows, which are generally benign, but a small percent of the volcanic products is explosive in character. Since risks associated with explosive eruptions are much greater than those associated with lava flows, investigating the deposits on Mauna Loa is an important part of understanding how Hawaiian volcanoes work and the full range of hazards they pose.

In 1840, an expedition led by Lieutenant Charles Wilkes provided the first documented investigation of Mauna Loa’s summit caldera. Assessing the area where today’s Hawaiʻi Volcanoes National Park summit cabin is located, Wilkes stated, “Nothing can exceed the devastation of the mountain: the whole area of it is one mass of lava that has at one time been thrown out in a fluid state from its terminal crater. There is no sand or other rock; nothing but lava, on whichever side the eye is turned.” This suggests that he saw no explosive deposits.

In 1885, surveyor J.M. Alexander made the first written description of deposits on the rim of the caldera. Thomas Jaggar, founder of the Hawaiian Volcano Observatory, later associated these scattered ash and blocks with the “extraordinary” eruption column in the opening phase of the 1877 eruption described by missionary Titus Coan: “It looked as if the summit of the mountain was melted, as if the heavens were on fire. Vast columns of illumined steam rose liked flaming gases from the burning pit, rushing upward with fearful speed to the height of 14,000 to 17,000 feet….”

While ascending Mauna Loa in 1924, William O. Clark, a former U.S. Geological Survey geologist, noted explosion deposits in a kīpuka along ʻĀinapō Trail. He concluded that the eruptions producing the debris were phreatic (explosions produced by the interaction of groundwater and hot rock or magma) in origin.

In 1949, USGS Hawaiian Volcano Observatory geologist Gordon Macdonald observed that “Angular blocks of rocks ejected by explosions are scattered about the rim of Moku‘āweoweo,” with maximum diameters of 1.5 m (5 ft) on the northwest fan. At the National Park’s summit cabin, he noted an abundance of ash, as well as blocks up to 1 m (3 ft) in size. He, too, concluded that the eruptions were phreatic and that the deposits were caused by a series of explosions from the summit caldera area.

Observations of explosive eruption deposits on Mauna Loa led to this question: When did the explosions occur?

Charcoal is normally used to date lava flows, but it is not found above tree line. Therefore, geologists use cosmogenic radionuclide (exposure) dating to establish reliable ages of the rocks around Moku‘āweoweo, which have been steadily exposed to cosmic rays.

In a study of the deposits, representative samples from each fan and the underlying lava flows (substrate) were collected. Rocks from all three fans near Moku‘āweoweo were processed using the exposure dating technique.

Results from exposure age-dating of the three west fan ejecta samples yield an average age of 870 before present (BP). The average age of the underlying lava flows is 980 years BP.

From the northwest fan, a single block yielded an age of 830 years BP. The substrate age of 575 years BP was deemed a poor analytical result and discarded.

The east fan’s exposure ages for two blocks are 220 and 150 years BP, making this deposit very young! The average age from five substrate samples near the summit cabin is 980 years BP.

The age of the deposit along the ʻĀinapō Trail was also deemed unacceptable.

Mauna Loa has had at least four explosive phreatic eruptions from the caldera region in the past 880 years, with at least one in post-contact time (since 1823). Although no one lives at the summit of Mauna Loa, additional explosive summit eruptions have the potential to pose a threat to people on the ground and to aircraft.