HAWAII VOLCANOES NATIONAL PARK - Observations suggest that the magma system beneath Puʻu ʻŌʻō has become increasingly pressurized. A new vent could form at any time. 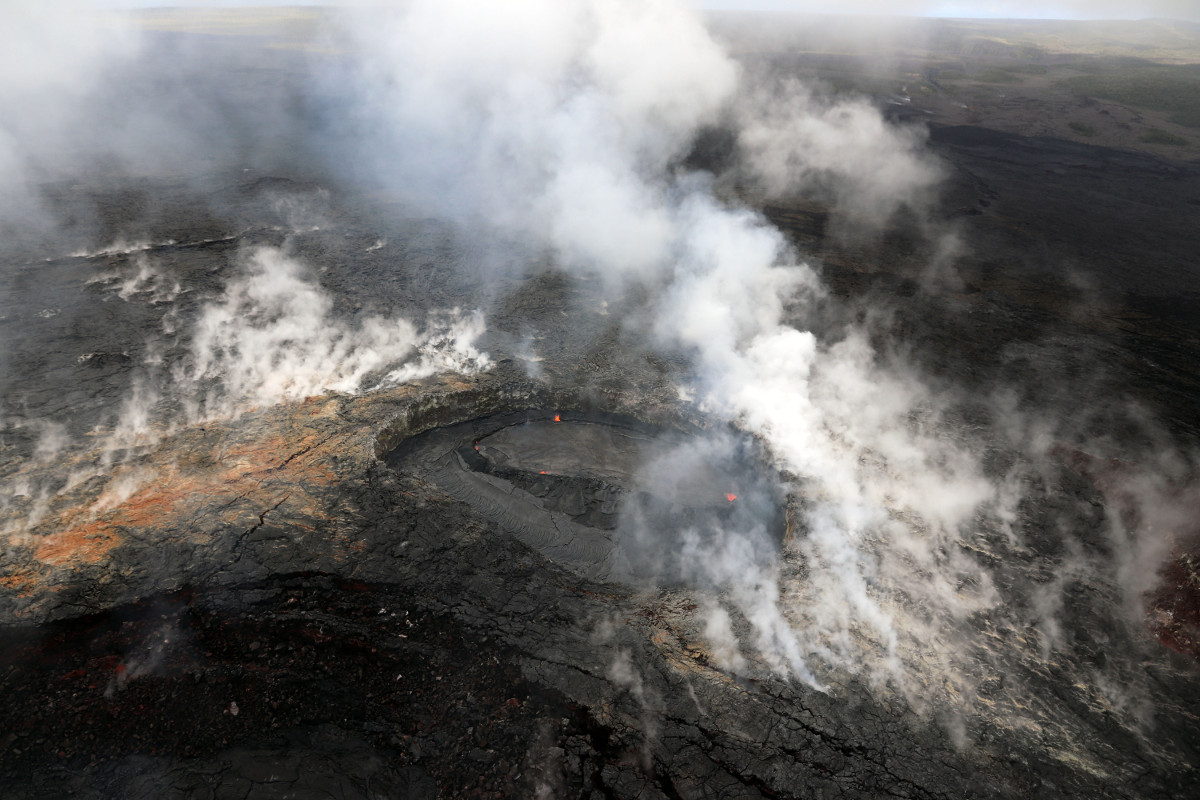 USGS: Lava within the west pit at Pu‘u ‘Ō‘ō has continued to rise since HVO’s previous overflight (March 27) and has formed a perched lava pond (center) contained within a levee.

According to the USGS Hawaiian Volcano Observatory, observations suggest that the magma system beneath Puʻu ʻŌʻō has become increasingly pressurized. If this activity continues, USGS says, a new vent could form at any time. The new vent could be on the Puʻu ʻŌʻō cone, or along adjacent areas of the East Rift Zone.

Since mid-March 2018, instruments on Puʻu ʻŌʻō have recorded a pronounced inflationary trend of the cone (USGS graph below).

Similar episodes of inflation and uplift of the crater floor at Pu’u ‘Ō’ō occurred in May–June 2014 and May 2016. These episodes preceded the opening of new vents on Puʻu ʻŌʻō.

Here is the complete notice as it was issued by USGS:

Volcanic Activity Summary: Observations and measurements of the Pu’u ‘Ō’ō eruption on Kīlauea Volcano’s East Rift Zone during the past month suggest that the magma system beneath Pu’u ‘Ō’ō has become increasingly pressurized. If this activity continues, a new vent could form at any time, either on the Pu’u ‘Ō’ō cone or along adjacent areas of the East Rift Zone.

Since mid-March 2018, a tiltmeter and GPS station on Pu’u ‘Ō’ō have recorded a pronounced inflationary trend of the cone, and recent webcam images have detected simultaneous uplift of the Pu’u ‘Ō’ō crater floor by several meters (yards). These observations provide evidence that magma is accumulating at shallow depths beneath Pu’u ‘Ō’ō.

Breakouts from the 61g lava flow are located close to Pu’u ‘Ō’ō and above the Pulama pali within the Kahaualeʻa Natural Area Reserve (NAR) and Hawai’i Volcanoes National Park, respectively. Because of volcanic hazards, the Hawaii Department of Land and Natural Resources has restricted public access to the Kahauale’a NAR since 2007. Areas within the National Park are also closed.

A new vent located on the cone of Pu’u ‘Ō’ō would erupt lava flows onto one or more sides of the cone that would initially advance downslope rapidly within a few kilometers (miles) from the vent. Because of the potential for a sudden breakout anywhere on Pu’u ‘Ō’ō, the cone is extremely hazardous. The location of a new vent or potential lava-flow paths cannot be estimated until such time that a new vent forms and stabilizes.

Remarks: Kīlauea Volcano’s East Rift Zone eruption began in January 1983 with high lava fountains that built a cinder-and-spatter cone, later named Pu’u ‘Ō’ō. Subsequent activity included continuous lava effusion from vents on Pu’u ‘Ō’ō or within a few kilometers (miles) east or west of Pu’u ‘Ō’ō. Most of the lava flows erupted from these vents have advanced down the south flank of Kīlauea, often reaching the ocean.

A new vent that opened on the northeast flank of Puʻu ʻŌʻō on June 27, 2014, sent a lava flow (informally called the June 27th flow) 20 km (12.4 miles) to the northeast and into Pāhoa, a town in the Puna District of the Island of Hawai’i. This lava flow persisted until early March 2015, when all activity near Pāhoa ceased.

On May 24, 2016, the opening of a new vent on the east flank of Puʻu ʻŌʻō led to the demise of the June 27th vent and flow, and sent a new lava flow (61g flow) south-southeast toward the ocean. The flow advanced about 10 km (6.2 miles), reaching the ocean on July 26, 2016. Lava stopped flowing into the ocean in early November 2017, after which surface flows have progressively retreated to near-vent areas above the Pulama pali.