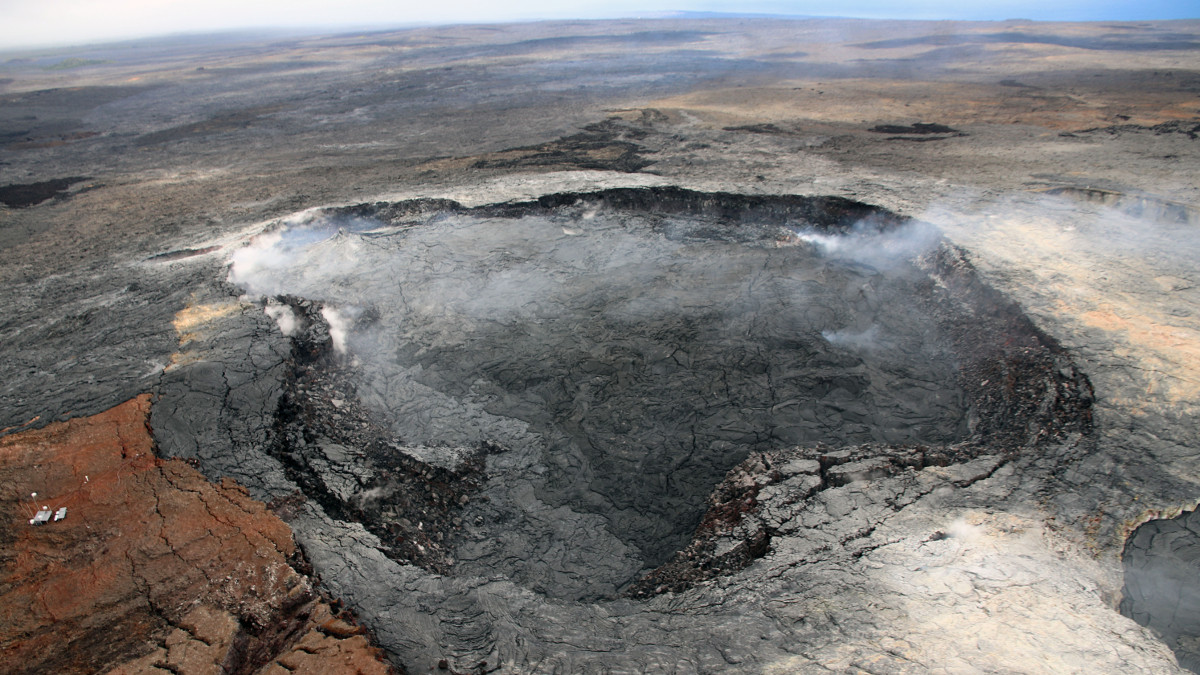 (BIVN) – Scientists with the U.S. Geological Survey Hawaiian Volcano Observatory have issued two separate Volcanic Activity Notices concerning the present activity at the two eruptions on Kilauea, and now it is the focus of the weekly Volcano Watch article.

The past few weeks have been exciting for volcano watchers on the Island of Hawai‘i, especially for visitors to Hawaiʻi Volcanoes National Park’s Jaggar Museum overlook, where views of the active summit lava lake within Halemaʻumaʻu have been spectacular.

Since April 21, high lava lake levels in the informally named “Overlook crater” within Halemaʻumaʻu at the summit of Kīlauea Volcano have produced multiple overflows of pāhoehoe lava onto the floor of Halemaʻumaʻu. As of April 26, these new flows have covered just under 90 acres or nearly three-fourths of the Halemaʻumaʻu crater floor. They are the first significant overflows of the summit lava lake since April-May 2015.

Meanwhile, on Kīlauea’s East Rift Zone, the Puʻu ʻŌʻō cone has been inflating and expanding steadily since mid-March, with the west pit lava pond level rising, the main crater floor uplifting and cracking, and small lava flows intermittently active inside the crater. The USGS Hawaiian Volcano Observatory released a Volcano Activity Notice on April 17 to highlight this activity and to note that the past two similar changes resulted in new breakouts of lava from new vents on the Pu‘u ‘Ō‘ō cone.

So, what is going on with Kīlauea?

In a nutshell, the magmatic plumbing system extending from the summit reservoir to Puʻu ʻŌʻō is pressurizing. This means that an excess of magma is being stored the system, causing swelling (inflation and expansion measured by tiltmeters and GPS), an uptick in microearthquakes as the surrounding rocks are stressed, and an increase in the height of lava lakes at both the summit and Puʻu ʻŌʻō.

What’s causing this pressurization? This is where things get less certain.

Two general possibilities are being discussed by HVO scientists. It could be due to a pulse of increased magma supply to the system from the deeper summit reservoir (and ultimately the mantle source). Perhaps more likely, it could be that one or more obstructions have developed somewhere in the system between the summit, Puʻu ʻŌʻō, and the episode 61g vent, and are now backing things up. A combination of both factors is also possible.

Arguments against increased supply from depth: We have seen no increases in gas emissions, tephra production, or lava temperature that might be expected with a magma surge, although we are still collecting data to verify these observations. Deformation data initially showed very little change in the shallow summit magma reservoir when Pu’u O’o began inflating in mid-March. An influx of new magma would have been expected to affect the summit first.

Perhaps the favored hypothesis at present is that a breakdown of the connection between the Puʻu ʻŌʻō reservoir and the episode 61g vent has caused a backup from Puʻu ʻŌʻō uprift to the summit magma reservoir and lava lake.

Why this blockage developed is another question. Did the effusion rate from Puʻu ʻŌʻō slow to the point where efficient drainage out the 61g vent could not be sustained, essentially causing magma to back up into the Puʻu ʻŌʻō reservoir and cone? This is a difficult question to answer, but there is ample evidence that the summit reservoir does respond to changes at the Puʻu ʻŌʻō vent. Impeding outflow of magma from the summit to the 61g flow field could be the reason the lava lake within Halemaʻumaʻu is rising.

What is next for Kīlauea?

As long as the system remains pressurized, we expect continued high levels of the summit lava lake and Pu‘u ‘Ō‘ō lava pond, overflows onto the floor of Halemaʻumaʻu, and ongoing deformation and microearthquakes.

This activity could end with a new breakout at Puʻu ʻŌʻō relieving pressure on the entire system and lowering the lava level at both locations. Alternatively, magma could find an another pathway to relieve the pressure, such as an intrusion into the south caldera (as occurred in 2015), Southwest Rift Zone, or uprift of Puʻu ʻŌʻō along the East Rift Zone

HVO is carefully watching various data streams to catch early signs of change that might indicate Kīlauea’s next move. Like many of you, we, too, are marveling at the sight of lava on the floor of Halemaʻumaʻu.