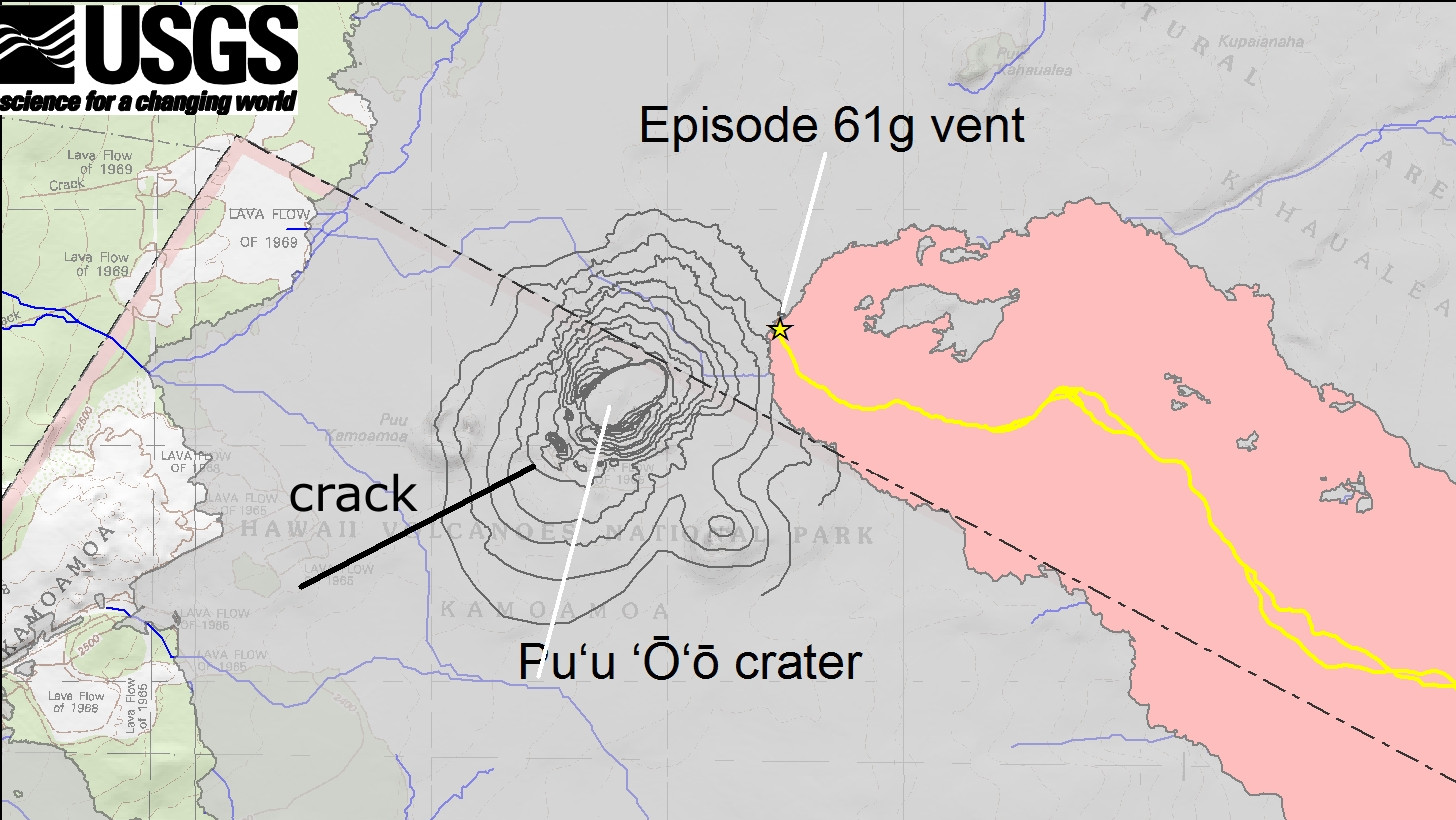 HAWAII VOLCANOES NATIONAL PARK - Scientists have discovered a crack formed on the west side of Pu‘u ‘Ō‘ō on April 30th, 2018, during or immediately after the crater floor collapsed. 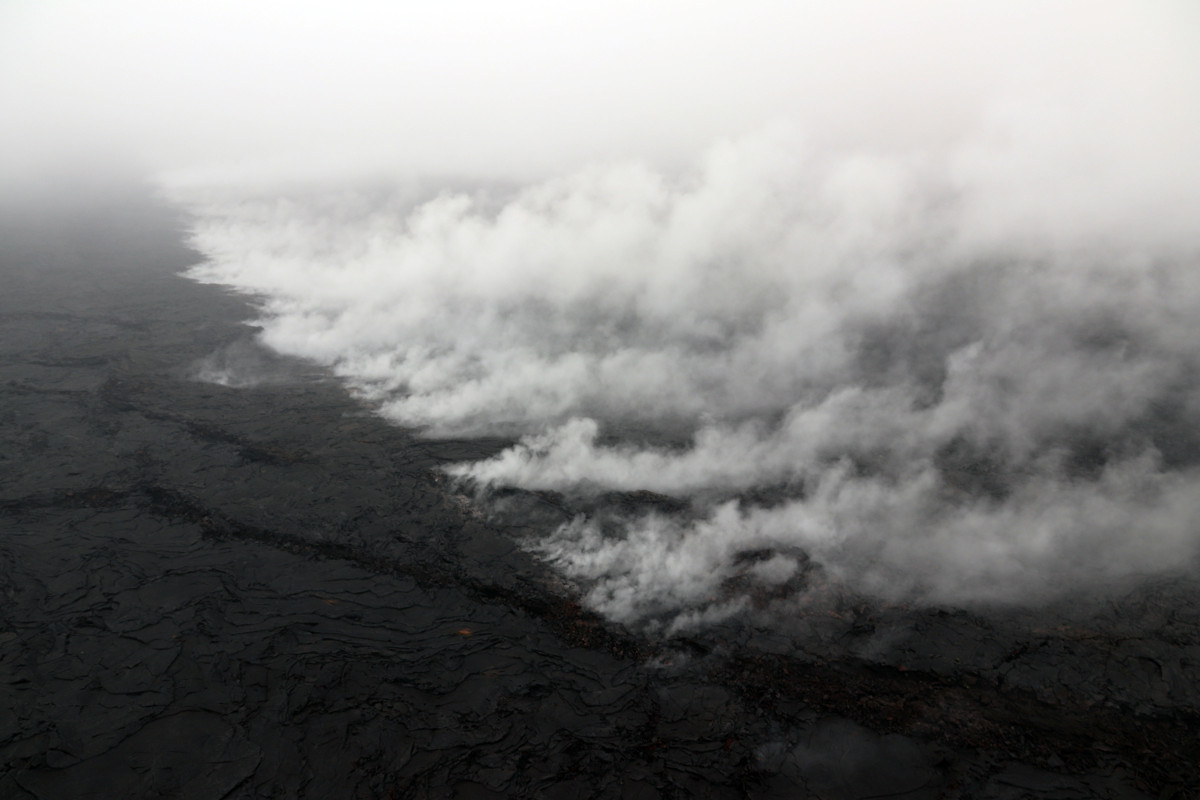 (BIVN) – A half mile long, steaming crack was discovered just west of Pu‘u ‘Ō‘ō crater during an overflight by scientists on Tuesday, following the collapse of the crater floor the day before.

“A new crack 1 km (0.6 mile) long was found on the west (uprift) side of Pu‘u ‘Ō‘ō,” the USGS Hawaiian Volcano Observatory wrote in a photo release Tuesday evening. “The cracking appeared to be nearly continuous en echelon structures that were heavily steaming. A small amount of lava was apparently erupted from the crack, based on the presence of nearby tiny pads of lava and spatter, but it was no longer active when HVO geologists saw it during the overflight.” 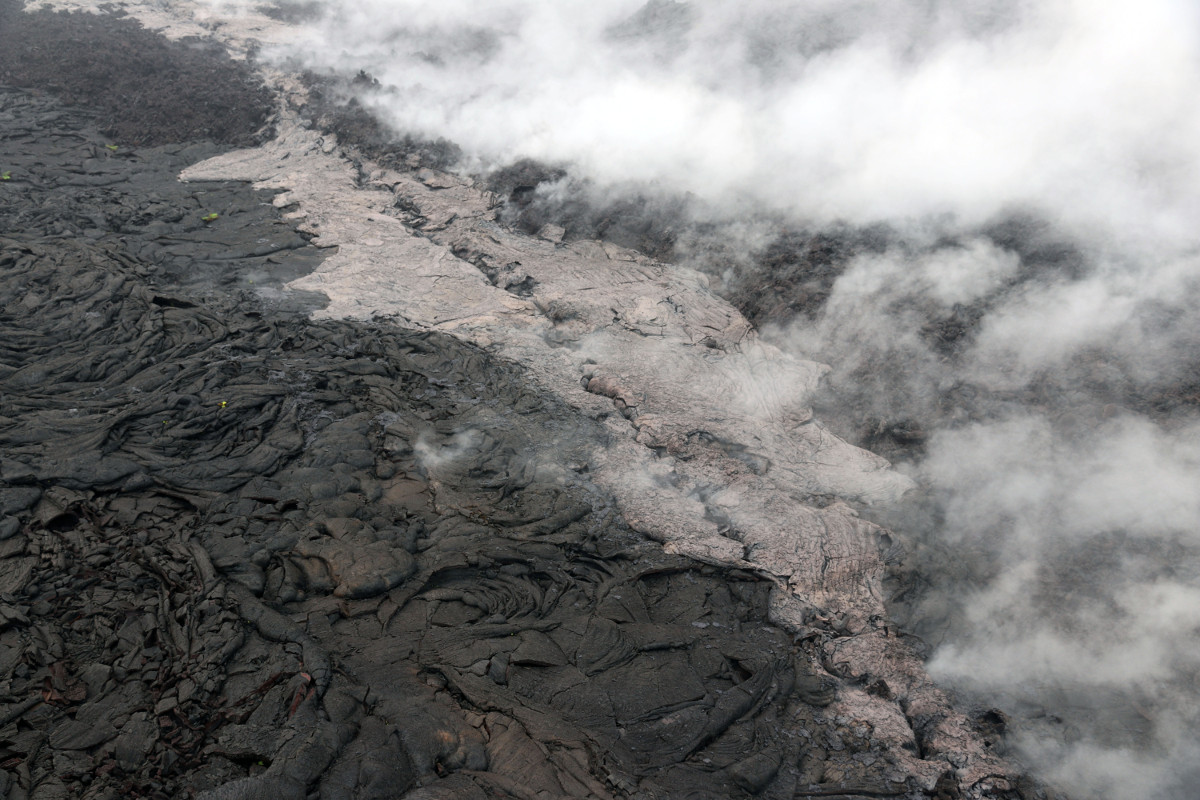 USGS: Telephoto view of a small lava flow (lighter in color) and spatter (blue-gray) that were erupted from a section of the crack on the west flank of Pu‘u ‘Ō‘ō.

On Tuesday morning, USGS issued a new Volcanic Activity Notice and, after recording a swarm of earthquakes to the east, later reported “an intrusion of magma occurred overnight in the lower East Rift Zone extending from the general area of Puʻu ʻŌʻō eastward at least as far as Highway 130.”

The collapse of Puʻu ʻŌʻō crater floor Monday afternoon prompted increases in seismicity and deformation along a large section of the rift zone, scientists said. However, field crews attempting to reach Puʻu ʻŌʻō Tuesday morning “were turned back by ash in the air above Puʻu ʻŌʻō, likely due to continuing collapse within the crater and vigorous gas emissions.”

USGS: Visibility was nearly obscured due to poor weather conditions, but a brief clearing allowed HVO’s webcam (POcam) to capture this image of the crater within Pu‘u ‘Ō‘ō shortly before the crater floor began collapsing. Unfortunately, due to ongoing poor weather, a clear view of the collapsed crater floor has not yet been possible.

“Starting at about 2:00 p.m. on Monday, April 30, marked increases in seismicity and ground deformation indicated that a change was underway at Pu‘u ‘Ō‘ō on Kīlauea Volcano’s East Rift Zone,” USGS wrote later in the day Tuesday. “Visibility was nearly obscured due to poor weather conditions, but a brief clearing allowed HVO’s webcam (POcam) to capture this image of the crater within Pu‘u ‘Ō‘ō shortly before the crater floor began collapsing. Unfortunately, due to ongoing poor weather, a clear view of the collapsed crater floor has not yet been possible. The Pu‘u ‘Ō‘ō crater floor continued to collapse for several hours yesterday; smaller drops in the crater floor have likely continued through today (May 1) based on thermal images.” 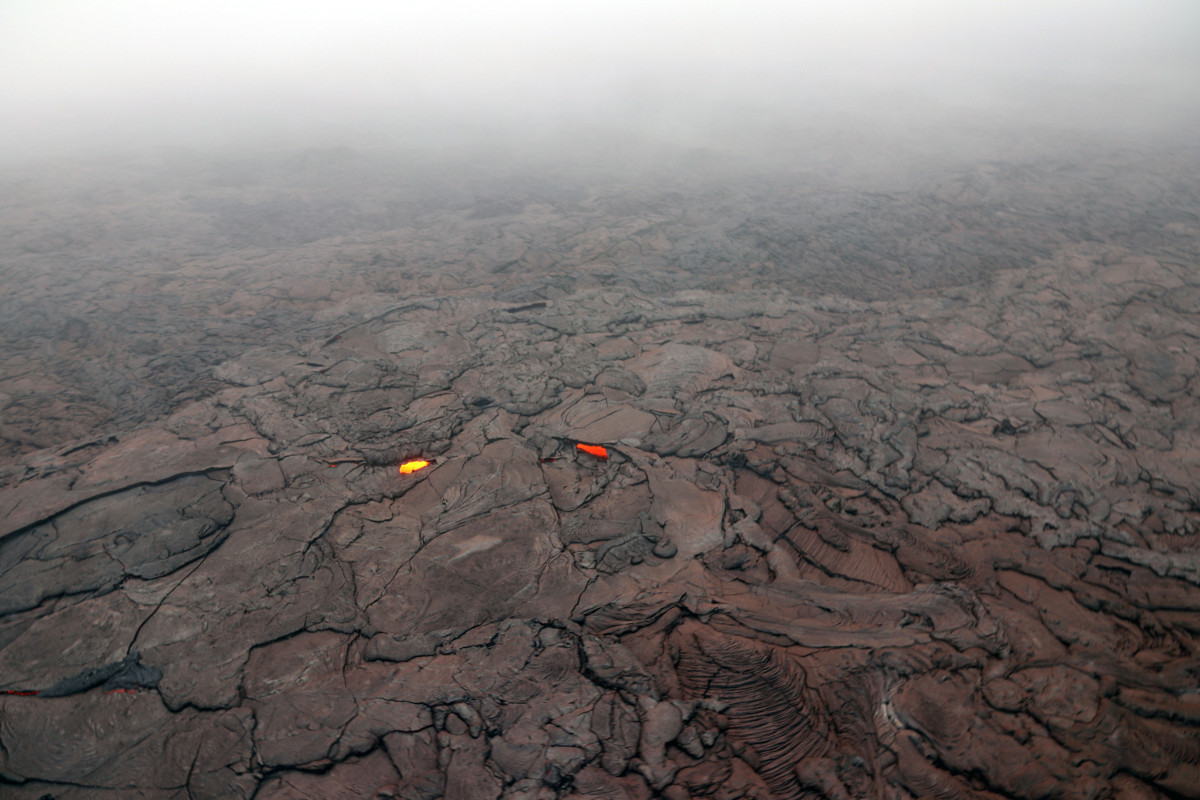 USGS: The collapse of the Pu‘u ‘Ō‘ō crater floor yesterday (April 30) produced a large amount of red ash that was deposited around Pu‘u ‘Ō‘ō, as well as blown farther downwind, with a thin dusting of ash reaching uprift as far as Mauna Ulu. This photo, taken between 1-2 km (0.6-1.2 miles) from the 61g vent, shows a layer of red ash on top of active 61g lava flow surface breakouts.

“As of this afternoon (May 1), the eruption at the summit of Kīlauea has apparently not been affected by the collapse at Pu‘u ‘Ō‘ō or intrusion of magma along the volcano’s Lower East Rift Zone,” USGS stated. “Following multiple overflows of the summit lava lake on April 21-27, which spilled lava onto the floor of Halema‘uma‘u, the lava lake level dropped over the weekend (April 28-29). But on the morning of April 30, the lava lake level began to rise in concert with summit inflation.” 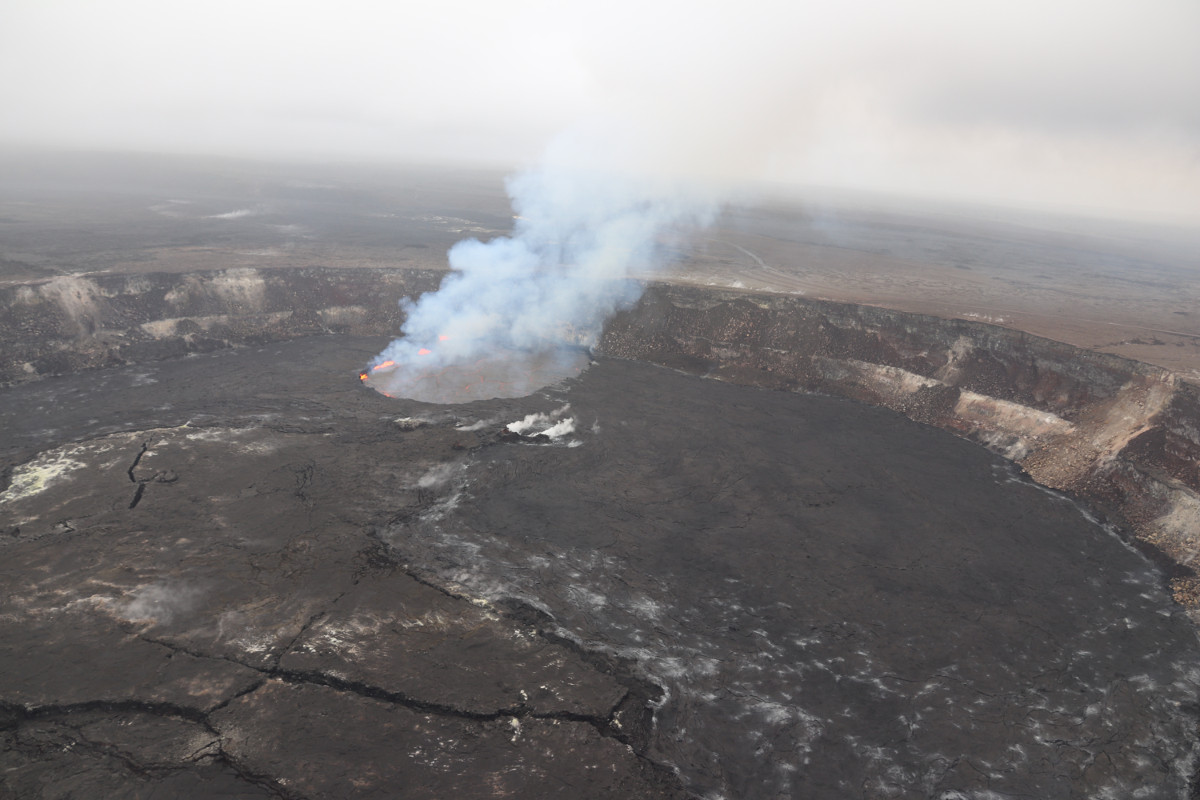 USGS: This image of the summit lava lake was taken during HVO’s overflight just before 8:00 a.m. today.