HAWAII VOLCANOES NATIONAL PARK - If the lava column drops to the level of groundwater beneath Kīlauea Caldera, influx of water into the conduit could cause steam-driven explosions, USGS says. 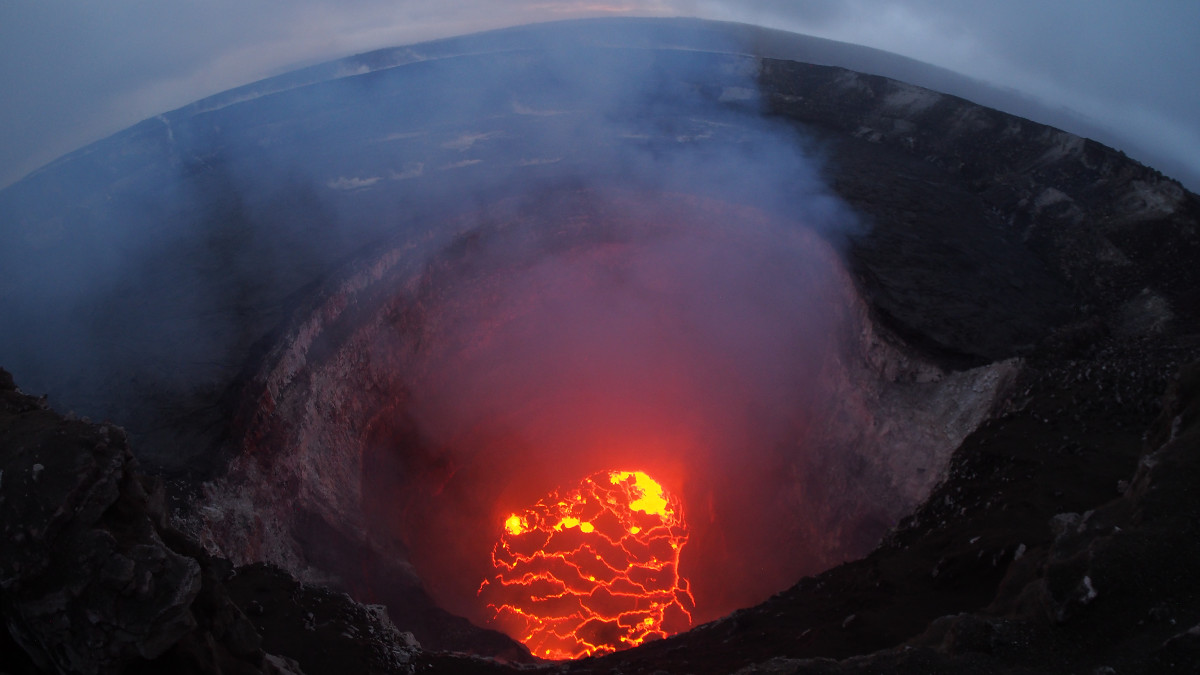 (BIVN) – All eyes seem to be on the ongoing eruption in Leilani Estates, but scientists are also keeping a concerned eye on the summit of Kilauea.

As the summit lava lake drops beyond the view of webcams, the USGS Hawaiian Volcano Observatory issued this new Volcanic Activity Notice on Wednesday morning:

Volcanic Activity Summary: The steady lowering of the lava lake in “Overlook crater” within Halemaʻumaʻu at the summit of Kīlauea Volcano has raised the potential for explosive eruptions in the coming weeks. If the lava column drops to the level of groundwater beneath Kīlauea Caldera, influx of water into the conduit could cause steam-driven explosions. Debris expelled during such explosions could impact the area surrounding Halemaʻumaʻu and the Kīlauea summit. At this time, we cannot say with certainty that explosive activity will occur, how large the explosions could be, or how long such explosive activity could continue.

Residents of the Kīlauea summit area should learn about the hazards of ashfall, stay informed of the status of the volcano and area closures, and review family and business emergency plans.

Primary hazards of concern should this activity occur are ballistic projectiles and ashfall.

BALLISTIC PROJECTILES
During steam-driven explosions, ballistic blocks up to 2 m (yards) across could be thrown in all directions to a distance of 1 km (0.6 miles) or more. These blocks could weigh a few kilograms (pounds) to several tons.

Smaller (pebble-size) rocks could be sent several kilometers (miles) from Halemaʻumaʻu, mostly in a downwind direction.

ASHFALL
Presently, during the drawdown of the lava column, rockfalls from the steep enclosing walls of the Overlook crater vent impact the lake and produce small ash clouds. These clouds are very dilute and result in dustings of ash (particles smaller than 2 mm) downwind.

Should steam-driven explosions begin, ash clouds will rise to greater elevations above ground. Minor ashfall could occur over much wider areas, even up to several tens of miles from Halemaʻumaʻu. In 1924, ash may have reached as high as 20,000 feet above sea level. Small amounts of fine ash from these explosions fell over a wide area as far north as North Hilo (Hakalau), in lower Puna, and as far south as Waiohinu.

GAS
Gas emitted during steam-drive explosions will be mainly steam, but will include some sulfur dioxide (SO2) as well. Currently, SO2 emissions remain elevated.

Kīlauea’s lava lake began to drop on May 2, 2018. From its peak on May 2 to the most recent measurement at 9 pm on May 6, the lava lake surface dropped a total of more than 200 m (656 ft). The subsidence was at a relatively constant rate of about 2 meters (yards) per hour.

Measurements of subsidence have not been possible since May 6 because of thick fume and the increasing depth to the lava surface. However, thermal images indicate continued lowering of the lake surface since that time, consistent with deflationary tilt recorded at Kīlauea’s summit. Therefore, we infer that the lake surface continues to drop at roughly the same rate. So, while HVO cannot report exact depths of the receding lava lake, we can monitor the overall trend.

USGS and HVO scientists are monitoring changes at the summit 24/7 and watching for signs that hazardous conditions have increased, or may increase. HVO is working closely with Hawai’i Volcanoes National Park and Hawai’i County Civil Defense to respond to this situation.