PUNA, Hawaii - Scientists say the east rift zone intrusion and seismic activity appears to be moving down-rift in a north-east direction. Kapoho to Kalapana residents are advised to be on the alert.

(BIVN) – Gov. David Ige’s request for a Presidential Disaster Declaration for Hawai‘i Island was granted, one day after the governor submitted the request. According to the office of the Governor:

The disaster declaration means that federal assistance will be available for public facilities such as roads, public parks, schools and waterpipes damaged or destroyed by the Kilauea volcanic eruption and earthquakes. It also covers costs for emergency protection measures including personnel for security and roadblocks, geologists and the military.

“I’m grateful for the quick approval of my request for a Presidential Disaster Declaration. This opens the door to federal assistance and demonstrates a solid partnership with the federal government as we work to keep Hawai‘i residents safe and support recovery efforts on Hawai‘i Island,” said Gov. David Ige.

Here is the latest information collected from different agencies, supplemented by multi-media.

Lower East Rift Zone: Hawaiian Volcano Observatory (HVO) reports the east rift zone intrusion and seismic activity appears to be moving down-rift in a north-east direction. Hazardous fumes continue to be released from existing cracks and fissures, but no lava activity is occurring at this time.

Summit: Deflationary tilt at the summit of the volcano continues and seismicity remains elevated, scientists say. “This morning, a steady plume of steam is rising from the Overlook vent. It is expected that occasional rockfalls into the deep vent will produce intermittent, low-level ash emissions. Depending on wind conditions, dustings of ash may occur in the Kilauea summit area and downwind. More energetic ash emissions are possible,” HVO wrote. 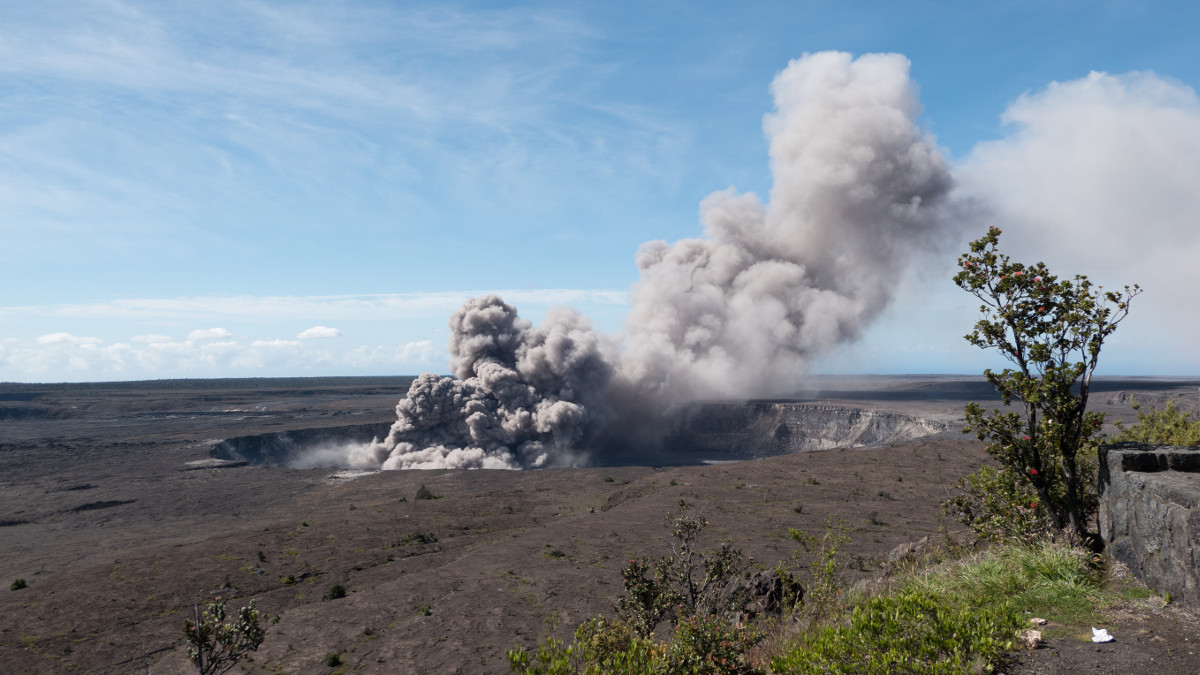 (USGS) At 9:17 a.m. on Friday, a weak ash plume rose from the Overlook Vent in Halema‘uma‘u crater, producing an energetic and dark plume.

Lower East Rift Zone: As a precautionary measure, residents of lower Puna between Kapoho and Kalapana, are advised to be on the alert in the event of possible gas emissions and volcanic eruption. “Because there may be little to no advance notice to evacuate, you should be prepared to evacuate at short notice,” civil defense says. “Take this time to prepare.”

All beach parks in Lower Puna have been closed, including the Pohoiki Boat Ramp.

“If you evacuate voluntarily, the Pahoa Community Center and Kea’au Community Center are open,” civil defense stated. “Food will be provided and the shelters are pet-friendly. This is a precautionary message. We want everyone in the Lower Puna area to be ready, and to remain safe.”

Civil Defense Recovery Information and Assistance Center (RIAC) at the Sacred Hearts Church in Pāhoa, Monday to Friday from 9 a.m. to 3 p.m. However, starting on Monday, the RIAC will be open at the Pāhoa Community Center, Monday to Friday from 9 AM to 3 PM. “You can come with questions and concerns that involve Evacuation Access Placards, Health, Mental/Spiritual Health, Housing, Aging, and On-Site Shelter needs,” civil defense says.

Summit: Hawai‘i Volcanoes National Park is now closed until further notice, due to the possibility of a steam-induced explosion at the summit of Kīlauea following the drop of the lava lake.

At the request of the park, the FAA has issued a Temporary Flight Restriction (TFR) that extends 20,000 feet AGL and a 12 nautical mile radius around the summit of Kīlauea.

Hawai‘i Electric Light reminds residents to treat all downed lines as live. Under no circumstances are you to approach or touch downed lines, officials say.

United States Postal Service announced that evacuated residents can pick up their mail at the Pāhoa Post Office. The Hawaii Volcanoes National Park Post Office has closed, mail pick up for area residents is at Volcano Village Post Office.