PUNA, Hawaii - After having erupted lava that appeared to be stored from the 1955 flow, fissure activity increased overnight as "new lava" arrived from uprift. 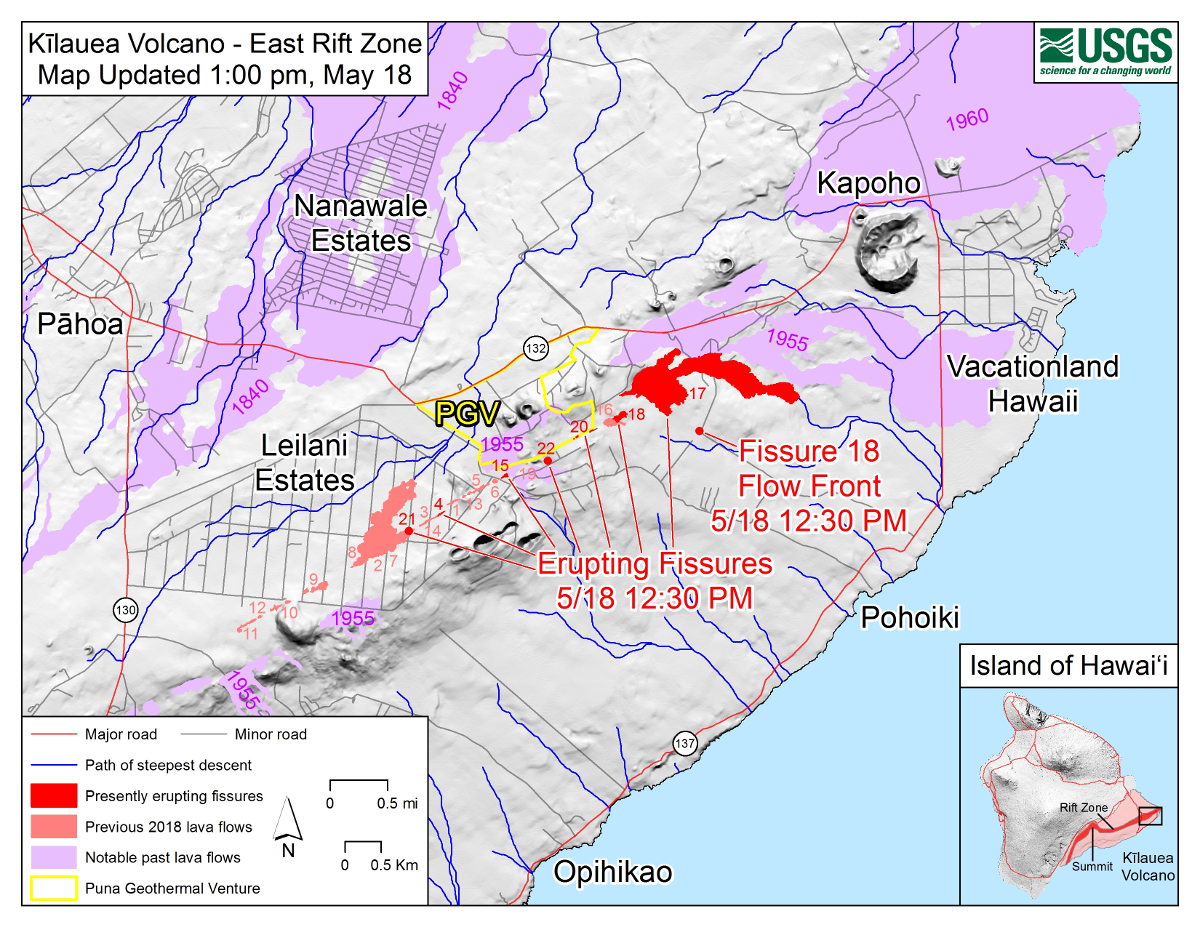 During the 11 a.m. media conference call on Friday, scientists with the USGS Hawaiian Volcano Observatory announced that samples taken from a new fissure on the lower East Rift Zone of Kilauea, fissure number 21, reveal that “we are now seeing magma that has come down from the summit and Puʻu ʻŌʻō.”

Before the arrival of new magma, the fissures were erupting what appeared to be lava stored away from the 1955 lava flow, making the lava more viscous in composition.

It an important finding because scientists expected to see more energetic fissure eruptions with faster moving pahoehoe lava flows in conjunction with the arrival of the new magma. Sure enough, activity along the fissures increased overnight.

The USGS Hawaiian Volcano Observatory, Hawaii Volcanoes National Park, and the National Weather Service all had representatives on the line for today’s conference call. They answered questions about the lower East Rift Zone activity as well as the potential for explosions at the summit.

No explosions and no earthquakes greater than magnitude 3.5 have occurred in the summit area in the past day. Background seismic levels have been increasing slowly over the course of the day.

The lower (eastern) end of the fissure system is the most active area today. This afternoon, fissure17 is actively spattering and the flow is active but is not covering new ground. In addition, fissures 18, and 20 are active, and the flow from fissure 18 has traveled approximately 0.6 miles in a southeast direction. An area 50-100 yards wide, parallel to and north of the line of fissures between Highway 130 and Lanipuna Gardens, is disrupted with many cracks. This long cracked area is currently being filled by pahoehoe lava flows from fissures 20 and 21. Fissure 15 was active and produced a lava flow that crossed Pohoiki Road between Leilani and Hinalo Streets.

Volcanic gas emissions remain elevated throughout the area downwind of the fissures.

Magma continues to be supplied to the lower East Rift Zone as indicated by the continued northwest displacement of a GPS monitoring station. Elevated earthquake activity continues, but earthquake locations have not moved farther downrift in the past couple of days.

USGS/HVO continues to monitor the lower East Rift Zone activity 24/7 in coordination with Hawaii County Civil Defense, with geologists onsite to track ongoing and new fissure activity and the advance of lava flows.