video by Mick Kalber, edited by BIVN / audio by HCCD

PUNA , Hawaii - The speed limit on Highway 130 has been lowered to 25 miles per hour between Leilani Estates and Kamaili Road, and officials are keeping a close eye on the lava on Puna Geothermal Venture property. 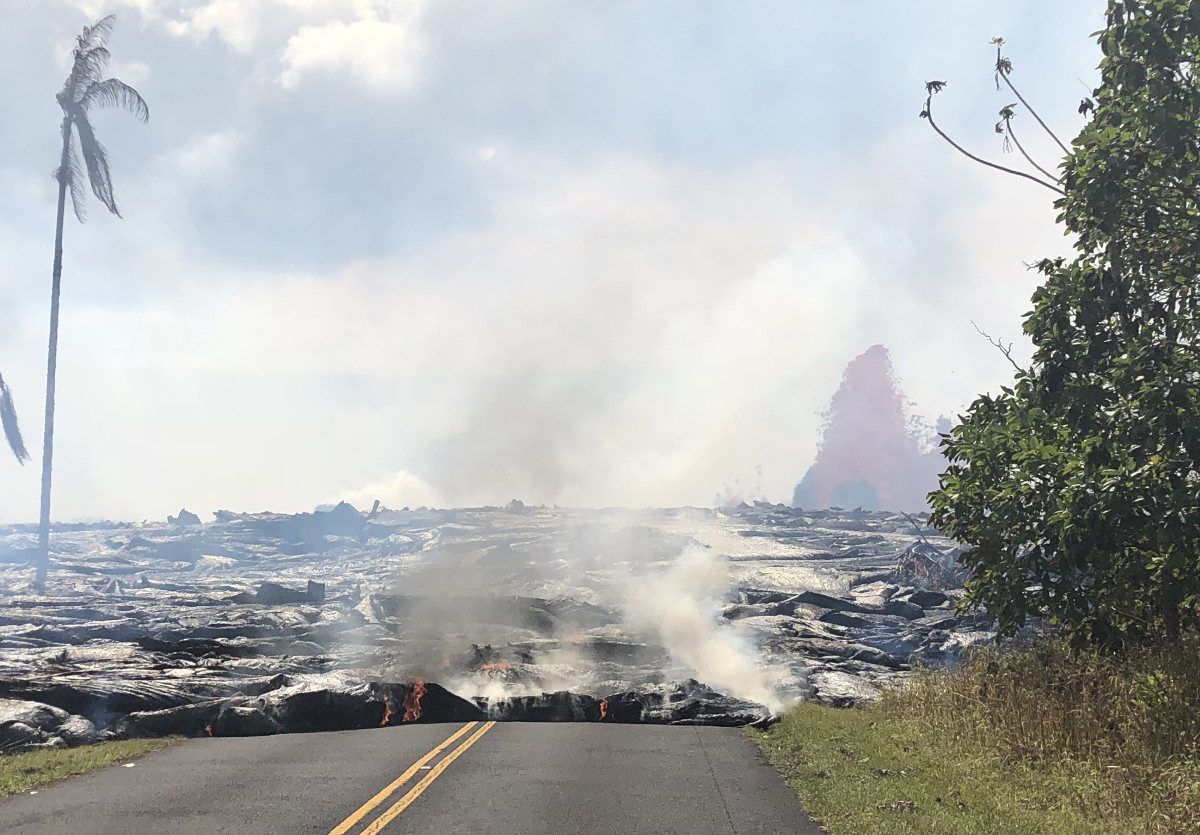 “A special task force headed by Tom Travis continues to work to make the wells safe and to prevent any threats to the public from developing,” a noon message from Hawaii County Civil Defense stated. “There is no hydrogen sulfide detected. The public will be kept informed of the situation.”

The Hawaii Department of Transportation is lowering the speed limit on Highway 130, between Leilani Estates and Kamaili Road, to 25 miles per hour. “This is a safety measure for everyone who drives over the steel plates installed over cracks caused by volcanic activity,” civil defense says. “The area continues to be monitored for your safety.”

HDOT is working with the National Parks Service, federal, state, and county agencies to prepare Chain of Craters Road as an evacuation route should Highway 130 be cut off by the Kilauea eruption. Plans are in the works to provide emergency access across the 2016-2017 lava flow while taking measures to prevent adverse impacts to park cultural and natural resources within Hawaii Volcanoes National Park. Aerial surveys and ground penetrating radar over the solidified 2016-2017 lava flow do not show major safety issues preventing the development of Chain of Craters as a future evacuation route.

Volcanic gases and vog emissions may increase in areas down wind of the vents in the lower east rift zone. “Due to southerly winds and heavy output of vog from the summit on Monday night, be prepared for a possible increase in vog and volcanic gas levels in the Hamakua area, lower Hilo and Puna,” civil defense stated.

Videographer Mick Kalber was aboard a Paradise Helicopters flight on Sunday, gathering footage from above the lava. He filed this report:

Lava from Kilauea Volcano’s current Leilani Estates Flow on the Big Island of Hawaii continues to decimate the Leilani Estates, Lani Puna Gardens, Pohoiki area near Pahoa. Pele has taken over 100 homes and other structures since the eruption began early this month. She continues to pour her molten rock into the ocean just southwest of Pohoiki, although that activity has waned somewhat. Lava fountaining is concentrated in the middle of Leilani Estates… fissure seven is 300-400 feet high, issuing red hot liquid rock at an unbelievable rate. Kilauea has now covered over 2500 acres of the Big Island in just the past three weeks! A huge flow from this fissure is heading toward the PGV Geothermal plant below the subdivision. She has entered the PGV property… her a’a flow making steady progress toward the facility. Officials are concerned about what will happen when the lava reaches the wells, which have been cooled and capped, but this scenario has never played out before. Leilani Ave below Nohea Street is now completely covered, and Pele is working her way up the rift… a new fissure has now opened up between Nohea and Kupono. Huge cracks have appeared on the Malama side of Pomaikai. Scientists project an eruption in that area soon. Much of the activity elsewhere on the flow field has somewhat given way to the gigantic fissure seven, which is truly a spectacular sight! Both a’a and pahoehoe flows continue enter the ocean just southwest of Pohoiki. Although the volume has slowed, another finger of lava above threatens to make it’s way to the ocean as well. Numerous fingers of lava have stretched toward the sea over the past several days, covering many properties, and destroying many homes… leaving other homes and their owners wondering what’s next. Although it began in Leilani on May 3rd, and burned several homes there, she soon established her vents below the subdivision with towering fountains, spatter cones feeding gigantic lava flows. So far, no deaths have been reported. Pohoiki Road and Highway 137 have both been covered with lava, but Highways 130 and 132 are still open as of this writing. More tomorrow!