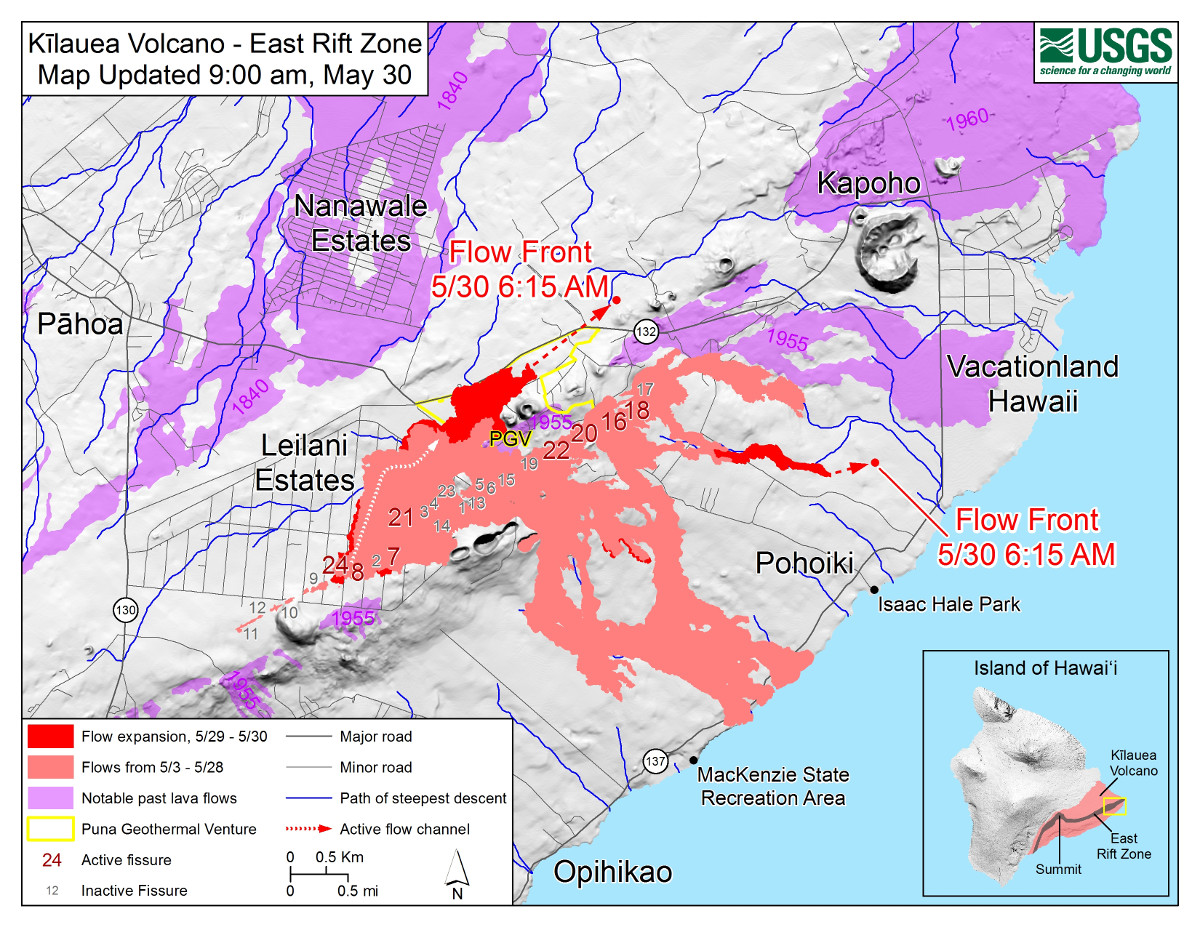 USGS: Map as of 9:00 a.m. HST, May 30, 2018. Given the dynamic nature of Kīlauea’s lower East Rift Zone eruption, with changing vent locations, fissures starting and stopping, and varying rates of lava effusion, map details shown here are accurate as of the date/time noted—and could have changed rapidly since that time. Shaded purple areas indicate lava flows erupted in 1840, 1955, 1960, and 2014-2015.

“Residents of Kapoho Beach Lots and Vacationland are advised to evacuate,” a noon civil defense message stated. “You are at risk of being isolated due to possible lava inundation of Beach Road near Four Corners.”

Another lava flow is estimated to be less than 1/2 mile from Highway 137, north of Ahalanui Beach Park. “Beach Road is restricted to resident traffic from Four Corners to Hawaiian Beaches to allow continued evacuations,” civil defense says.

USGS scientists Wendy Stovall said the lava coming from Fissure 8 matches the chemistry of the lava from Pu’u O’o, meaning the lava now being erupted in Leilani Estates is the hottest lava yet erupted, leading to fast moving flows. According to USGS this morning:

Fissure 8 maintained high fountains throughout Tuesday night and into Wednesday morning, with sustained heights exceeding 200 feet and the presence of multiple secondary fountains that reached to 60 feet. This fountaining continued to feed a lava flow that moved downslope along Highway 132. Advance rates accelerated late Tuesday and early Wednesday, reaching approximately 600 yards/hour. The flow moved north of Highway 132 in the vicinity of Noni Farms and Halekamahina roads, advancing along a steepest descent path that could take the flow to the Four Corners area.

The National Park Service finalized an agreement with the State of Hawaii to clear lava from Chain of Craters Road in order to provide a one-way, emergency road out of the Kalapana side of lower Puna should it become isolated by lava flows or damage to Highway 130.

During the conference, the National Weather Service was going over the data for an earthquake that had occurred at the Kilauea summit just minutes before the call began. The Magnitude 5.3 earthquake occurred at 10:53 a.m. at the Kilauea Caldera. “Earthquake activity is elevated at the summit, with a few events reported felt overnight,” a USGS reported stated before the quake occurred. “Volcanic gas emissions at the summit remain high and will combine with wind conditions to produce widespread vog across the Island of Hawaii on Wednesday.”

That widespread vog, which has also impacted West Hawaii, resulted in another Pride of America cruise ship cancellation in Kona.