LEILANI ESTATES, Hawaii - The Order is "due to the continuous unstable volcanic nature of the fissure eruptions in Leilani Estates now posing an imminent danger to property and bodily injury risk to residents and emergency responders." 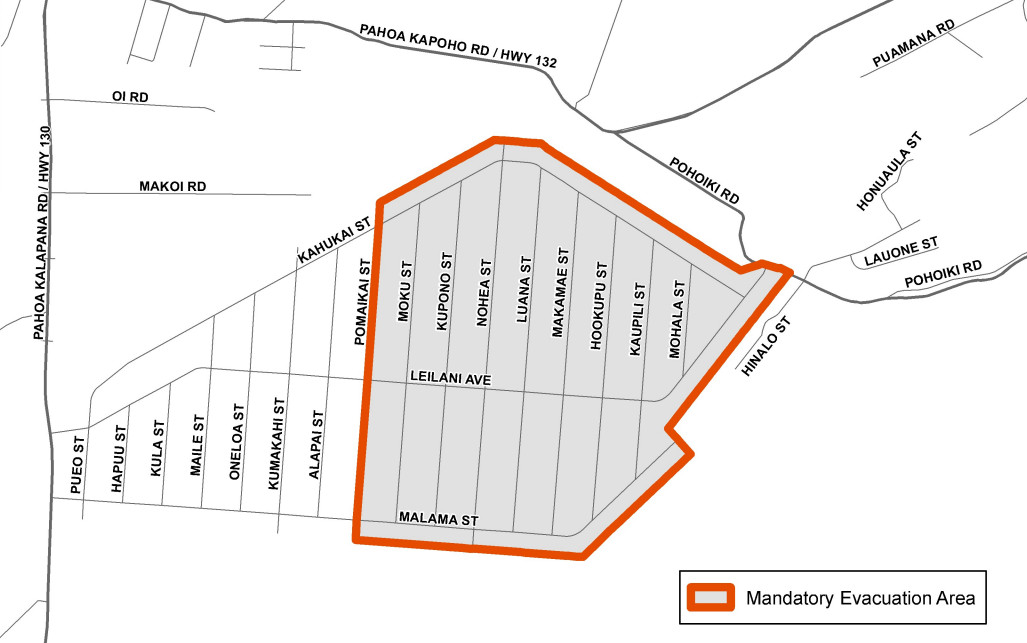 (BIVN) – Hawaii County Mayor Harry Kim signed a Mandatory Evacuation Order for half of Leilani Estates on Thursday, May 31, effective as of 12:06 p.m. today. All persons have 24 hours from the effective date and time to evacuate the mandatory evacuation area, the Order states.

Mayor Kim told the crowd at the Pahoa High School that he planned to enact a strict restriction area in Leilani Estates due to the ongoing volcanic eruption in the Puna subdivision.

Here is the text of the Order:

WHEREAS, on May 3, 2018, the Mayor of the County of Hawai’i and the Governor of the State of Hawai’i issued respective Emergency Proclamations declaring states of emergency due to active lava erupting along the East Rift Zone in Lower Puna, County and State of Hawai’i; and

WHEREAS, on May 9, 2018, the Governor of the State of Hawaii issued a Supplementary Proclamation expanding the scope and application of his Proclamation in order to provide further emergency disaster relief by suspending additional sections of the Hawai’i Revised Statutes; and

WHEREAS, the United State Geological Survey (USGS) Hawaii Volcano Observatory (HVO), at this time cannot project an end date to this eruptive event and continue to issue warnings; and

WHEREAS, Section 127A -13(b)(4) of Hawai’i Revised Statutes authorizes additional powers of the Mayor during a state of emergency including, but not limited to, the authority to direct and control the mandatory evacuation of the civilian population; and

WHEREAS, it has become necessary to supplement my Proclamation of May 3, 2018 with a Mandatory Evacuation Order due to the continuous unstable volcanic nature of the fissure eruptions in Leilani Estates now posing an imminent danger to property and bodily injury risk to residents and emergency responders involved in rescue missions in the areas identified below.

NOW, THEREFORE, I, Harry Kim, Mayor of the County of Hawai’i, do hereby proclaim and declare that a state of emergency continues to exist, and that in order to provide for the health, safety, welfare and protection of residents and emergency responders in the affected area, I hereby issue an ORDER requiring the mandatory evacuation of all civilians from all that area of Leilani Estates subdivision, including and East of Pomaikai Street, as specifically highlighted and delineated in the map attached hereto, and any subsequent amendments thereto as deemed necessary.

This Order is effective at 12:06 p.m. this 31th day of May 2018. All persons have twenty-four (24) hours from the effective date and time of this Order to evacuate the mandatory evacuation area.

Persons remaining in the mandatory evacuation area beyond the effective date and time of this Order do so at their own risk with the knowledge that emergency responders may not respond.

Persons in violation of this order are subject to arrest and liability for any recovery costs associated with rescue operations in the mandatory evacuation area.

This mandatory evacuation shall continue thereon for 60 days or until further act by this office.

IN WITNESS WHEREOF, I have hereunto set my hand and caused the Seal of the County of Hawaii to be affixed. Done this 31st day of May in Hilo, Hawai’i.