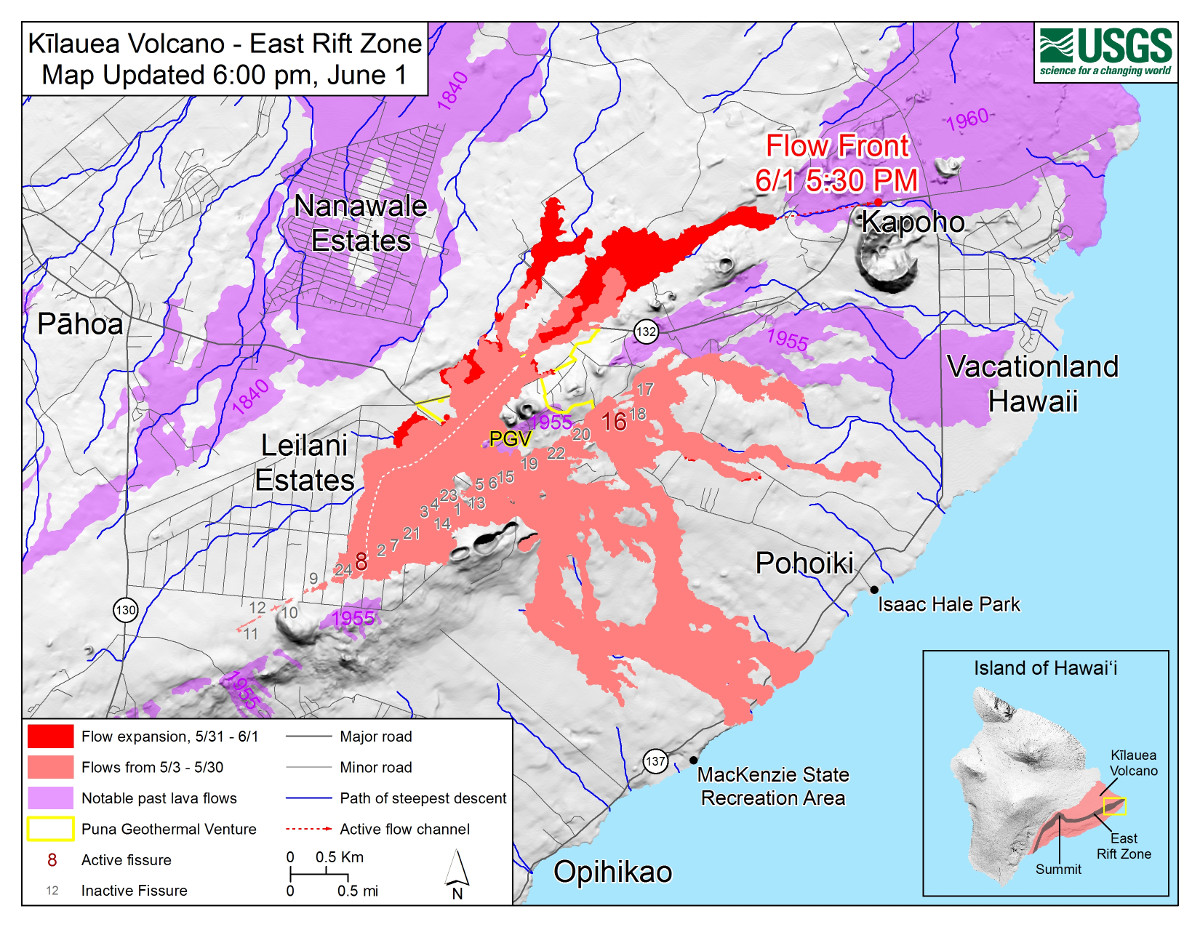 (BIVN) – Lava was approximately 0.28 miles from the Four Corners intersection as of 9:50 p.m. HST, as Fissure 8 continues to feed a channelized flow towards Kapoho, scientists say.

“Fountaining at Fissure 8 is reaching 180 – 220 feet in height and continues to feed a channelized lava flow to the northeast along Highway 132,” and down towards the intersection of Highways 132 and 137, the USGS Hawaiian Volcano Observatory reported at 10:30 p.m. “Small overflows from the channel are occurring along its length, including in a few places near the intersection of Highway 132 and Pohoiki road. The more western branches of the Fissure 8 flow either stalled or advanced only short distances.”

“Fissure 18 appears to be crusted over or inactive,” USGS HVO reported. “The flows that had been moving toward Highway 137 are either inactive or moving very slowly. Fissure 22 appears to be inactive.”

Hawaii County Civil Defense messaging in regards to Kapoho has remained largely the same over the course of the day. Officials say:

During a 3 p.m. press conference in Hilo, civil defense administrator Talmadge Magno described the effort to evacuate Noni Farms Road and Papaya Farms Road ahead of the lava flow.

Fascinating footage was recorded from the ground on Noni Farms Road by Jonathan Matthew Wright of codesearcher.com. Wright has been examining the lava flow in the Noni Farms area on his YouTube channel.

Above the flow, videographer Mick Kalber captured the bird’s eye view aboard Paradise Helicopters. “Very, very little remains of Lani Puna Gardens,” Kalber noted, “and the upper portion of Pohoiki Road is almost completely covered. Interestingly, we could clearly see the homes at the bottom of lower Malama in [Leilani Estates]. The great majority on and around lower Malama are still standing… nearly all the vegetation burned or killed by the heavy gases that generally blow in that direction… but Pele has left most of the homes untouched.”