VIDEO: 500 Earthquakes In 24 Hours, Most Ever Recorded At Kilauea Summit

HAWAII VOLCANOES NATIONAL PARK - The floor of Kīlauea Caldera continues to subside as pressure in the magma reservoir decreases in response to withdrawal of magma towards the East Rift Zone.

(BIVN) – A Magnitude 5.5 earthquake shook the summit of Kilauea on Sunday, on the same day that the USGS Hawaiian Volcano Observatory announced the volcano experienced the highest rate of quakes ever recorded in a 24 hour period.

The Pacific Tsunami Warning Center reported that the earthquake that occurred at approximately 3:51 p.m. was not large enough to cause a tsunami for the Island of Hawaii. An ash plume at the Kilauea Summit reached up to 8,000 feet. Fallout was expected to affect the Volcano and Pahala areas.

A few hours earlier, during a media conference call held to discuss the ongoing eruption Kilauea at the summit as well as the lower East Rift Zone, USGS HVO seismologist Brian Shiro said there has been over 500 earthquakes at the summit over the past day, which “is the highest rate ever measures there,” he said.

The high rate of earthquakes, as well as the growing magnitude of each explosive event, was the subject of multiple questions from the press during the call.

On May 29 release, the USGS Hawaiian Volcano Observatory went into greater detail in a two page release, entitled “Why so many earthquakes in the Kīlauea summit area?”

The floor of Kīlauea Caldera continues to subside as pressure in the magma reservoir decreases in response to withdrawal of magma towards the East Rift Zone. This is the same process that caused the summit lava lake to drop out of sight within the “Overlook vent” inside Halemaʻumaʻu Crater.

Deflation at Kīlauea’s summit has caused up to 1.5 meters (about 5 feet) of subsidence, which has stressed the faults around and within Kīlauea Caldera. This has led to numerous magnitude-3 or greater earthquakes, as well as many more smaller ones. The faults that are being stressed are shallow (likely less than 2 miles deep), so the earthquakes are shallow, which means that they have been widely felt by residents near the summit area. 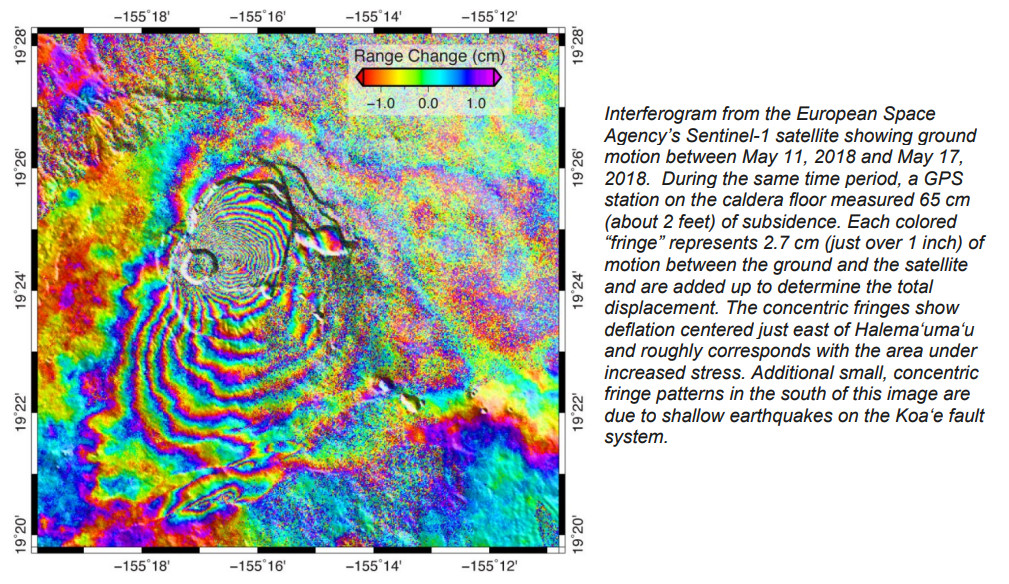 Occasional larger ash explosions from Halemaʻumaʻu have resulted in abrupt increases in reservoir pressure (which appear as “inflationary steps” in ground tilt data); these inflations negate the effects of ongoing deflation for a period of hours to days. After each explosion, the faults within and around the caldera are less stressed and, therefore, produce fewer earthquakes. As time goes on, deflation again stresses the faults and the number of detected (and felt) earthquakes increases. 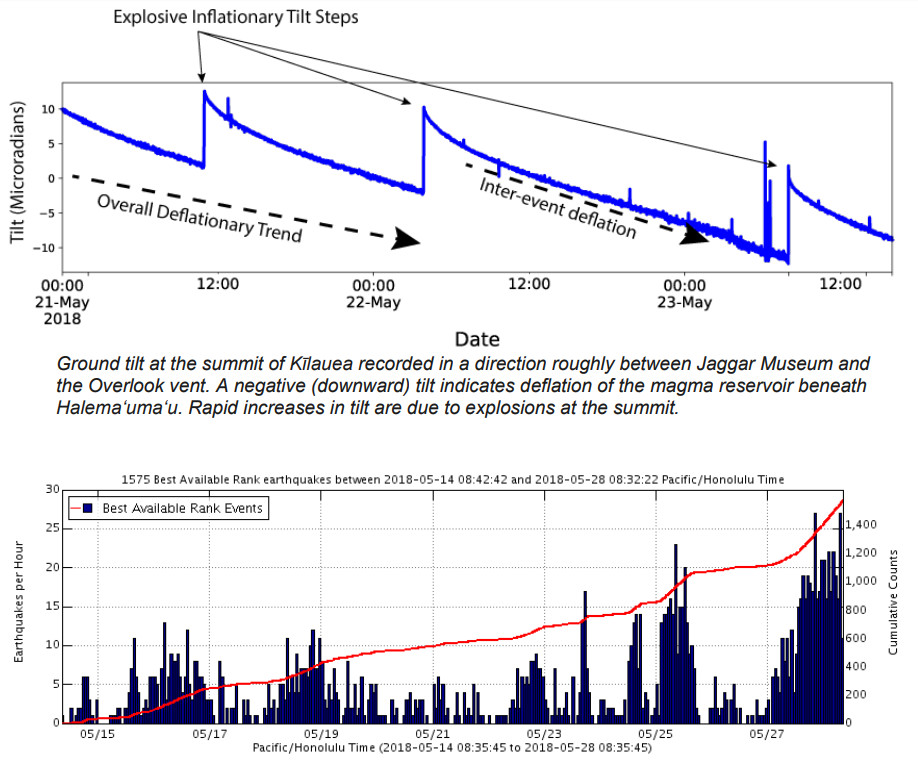 High rates of earthquake activity were observed during the 1924 summit eruption. Volcano resident Margaret Finch wrote to her father on May 15, 1924, “… and the earthquakes were awful. Some were a slow swaying motion, while others gave you a nasty vicious shake. I hate them all. I want to run whenever I feel one. There must be at least a hundred quakes a day…and probably a great many more than that.”

It appears that a process similar to now was at work back then. We expect earthquake production to continue as long as the summit continues to deflate, but the rate and magnitude of earthquakes will vary in response to explosions.

In 1924, based on known historical records, no earthquakes related to summit subsidence caused significant damage. In 1960, earthquakes occurring in the summit area during subsidence caused some minor damage in Volcano. In 2018, the USGS Hawaiian Volcano Observatory and Hawaiʻi Volcanoes National Park have seen some damage from these earthquakes, and the potential for damaging earthquakes during this eruption persists. In addition to preparing for ashfall, summit area residents should consider earthquake preparedness as part of their home and business safety plans.