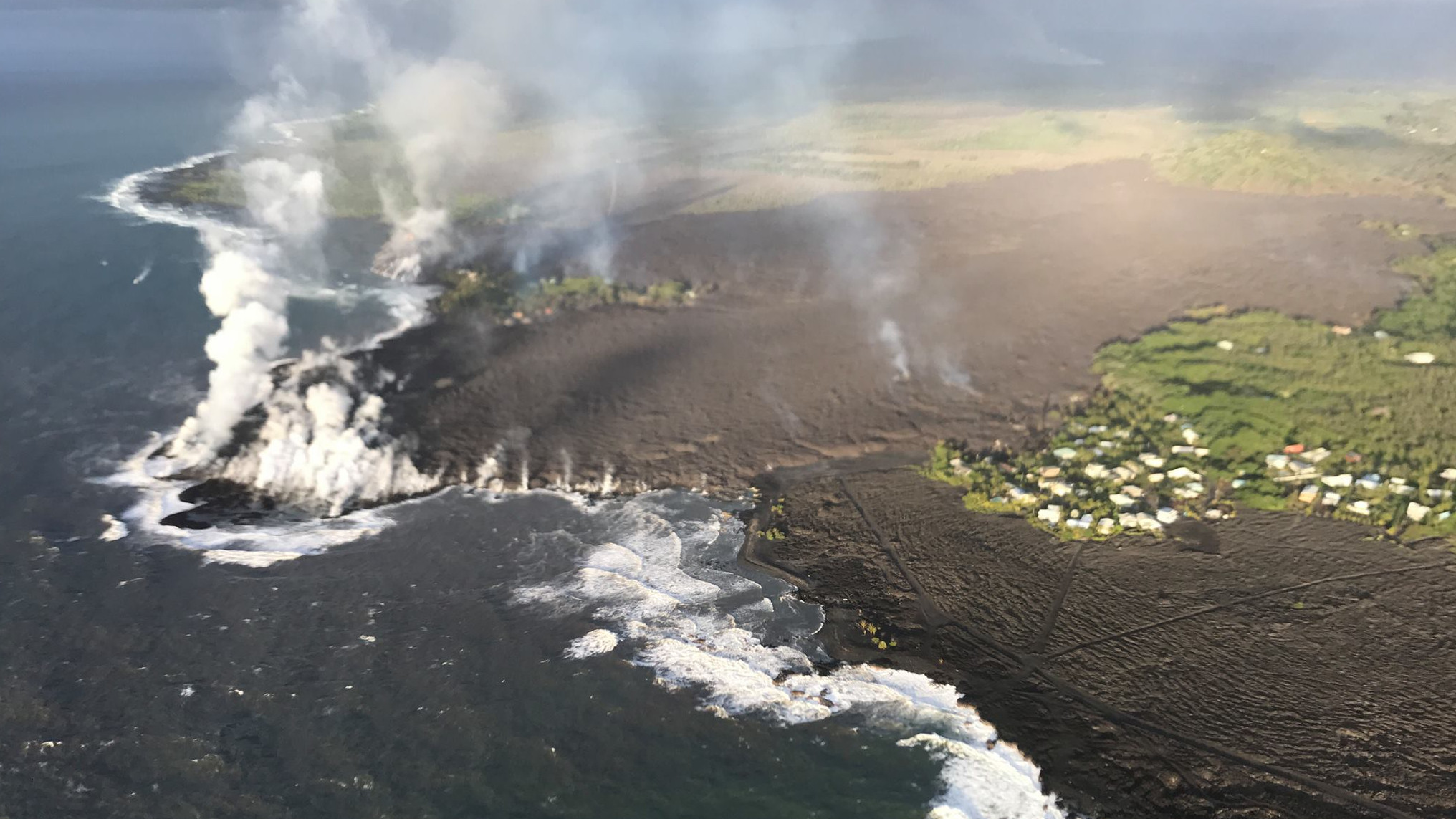 UPDATED: USGS photo shows the extent to which Kapoho Bay has been filled. In the distance, you can see another ocean entry and a southern lava-flow branch, which is extending into the tide pools and Vacationland.

HAWAII ISLAND - A small explosion occurred at Kīlauea's summit at 4:32 AM HST, sending a plume up to 5,000' above sea level. This is similar to other events of the past few weeks, USGS says.

A small explosion occurred at Kīlauea’s summit at 4:32 a.m. HST. The National Weather Service says it observed a plume reaching up to 5,000 feet above sea level. Low level trade winds will push any ash toward the southwest toward communities of Pahala, Wood Valley, Naalehu and Ocean View. The USGS Hawaiian Volcano Observatory says the explosion was associated with a Magnitude 5.5 earthquake. The Pacific Tsunami Warning Center says the event did not create a tsunami.

UPDATE (8:20 a.m.) – The USGS Hawaiian Volcano Observatory’s 6:30 a.m. HST overflight “confirmed that lava completely fills Kapoho Bay, extending 0.7 miles from the former coastline,” scientists reported this morning. “To the south, lava is entering the water at the Vacationland tidepools, having inundated most of that subdivision. To the north, lava has covered all but the northern part of Kapoho Beach Lots.”

On laze plume that is blowing inland from the ocean entry, Hawaii County Civil Defense has this information:

“The lava breakout on the north side of the Kapoho cinder pits continues to be stalled southeast of the intersection of Railroad Avenue and Cinder Road,” the USGS Hawaiian Volcano Observatory reports. “A lava breakout from the south margin of the flow near the intersection of Highway 132 and Railroad Avenue has completely encircled the Green Lake cone.”

UPDATE (8:20 a.m.) – USGS reported on Tuesday morning that “the northernmost lobe of the Fissure 8 flow, in the Noni Farms Road area, advanced downslope about 200 yards overnight.”

Hawaii County Civil Defense says Government Beach Road, between Kahakai Boulevard and Cinder Road, is open to Waa Waa and Papaya Farms Road residents only with official credentials. There is no curfew. “Residents in this area should heed warnings from Civil Defense officials and be prepared to evacuate with little notice,” the county says.

“Multiple observations from field crews and overflights suggest the Fissure 8 fountain is less vigorous this evening, with maximum heights of 130-160 feet,” USGS reported last night. Fissure 8 is feeding a channel transporting lava to the northeast along Highway 132 and east to the ocean entry in Kapoho Bay.

“Pele’s hair and other lightweight volcanic glass from high fountaining of Fissure 8 are falling downwind of the fissure and accumulating on the ground within Leilani Estates,” USGS says. “Winds may waft lighter particles to greater distances. Residents are urged to minimize exposure to these volcanic particles, which can cause skin and eye irritation similar to volcanic ash.”

The Keaau Armory shelter has reached capacity, the county says. The shelter at Pahoa Community Center is open and pet-friendly.

Motorists are advised to expect delays and to drive with caution as heavy machinery will be in the work area. 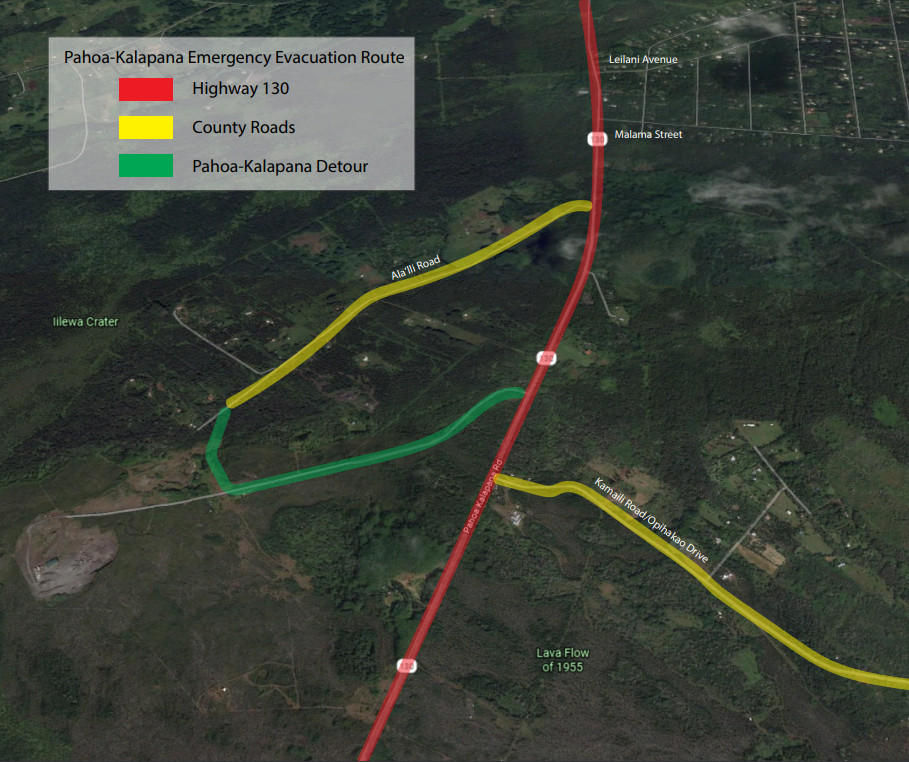 An eruption community information meeting will be held at the Pahoa High School cafeteria this evening, Tuesday, May 5 at 5:00 in the evening.

Community meetings on vog and volcanic ash hazards are scheduled for:

A Puna insurance claims forum will be held on Thursday, June 7, from 3:30 to 6:30 p.m. at the Hawaiian Shores Community Association Building, commonly known as “The Stables”, located in Hawaiian Beaches.

Man Arrested For Speeding Through Checkpoint

A Kapoho man was arrested on Saturday, as lava approached the Four Corners intersection. From Hawaii County Police:

Hawaiʻi Island police have arrested a motorist after he disregarded and sped through a traffic control checkpoint on Government Beach Road just north of the intersection with Hwy. 132 as an active lava flow approached.

The suspect is identified as an Allan Bartels, a 62-year-old male with a residence in Kapoho.

On Saturday, (June 2), at approximately 8:30 a.m., a male party drove up to a police checkpoint on Government Beach Road, (Highway 137), just north of Highway 132, “Four Corners” intersection. Upon being contacted by officers and informed that the road was closed and he could not enter the area, he disregarded the officer’s commands and sped through the checkpoint at a high rate of speed.

Officers pursued the man’s van with flashing lights and siren in an attempt to stop it, however, he continued south approaching two County workers who were standing on the road attempting to flag the van down. The driver was observed to shake his head and continue toward them causing the County worker to jump off the road to avoid being struck.

Officers pursued the suspect to a residence located just above Government Beach Road and arrested him; they then expedited their way back out of the area through the “Four Corner” intersection area as the lava flow was within 50-100 feet from crossing onto the roadway and cutting off an exit route.

The suspect was later charged with Refusing to Evacuate, Obstructing Government Operations, Resisting Order to Stop Motor Vehicle, Reckless Driving, and two counts of Reckless Endangering in the 2nd degree. He was unable to post his $3,750 bail and remains confined at the detention center in Hilo.

Anyone with further information regarding this incident are asked to call Officer Duane Rapoza of the Puna District at (808) 965-2716 or the police non-emergency telephone number (808) 935-3311. 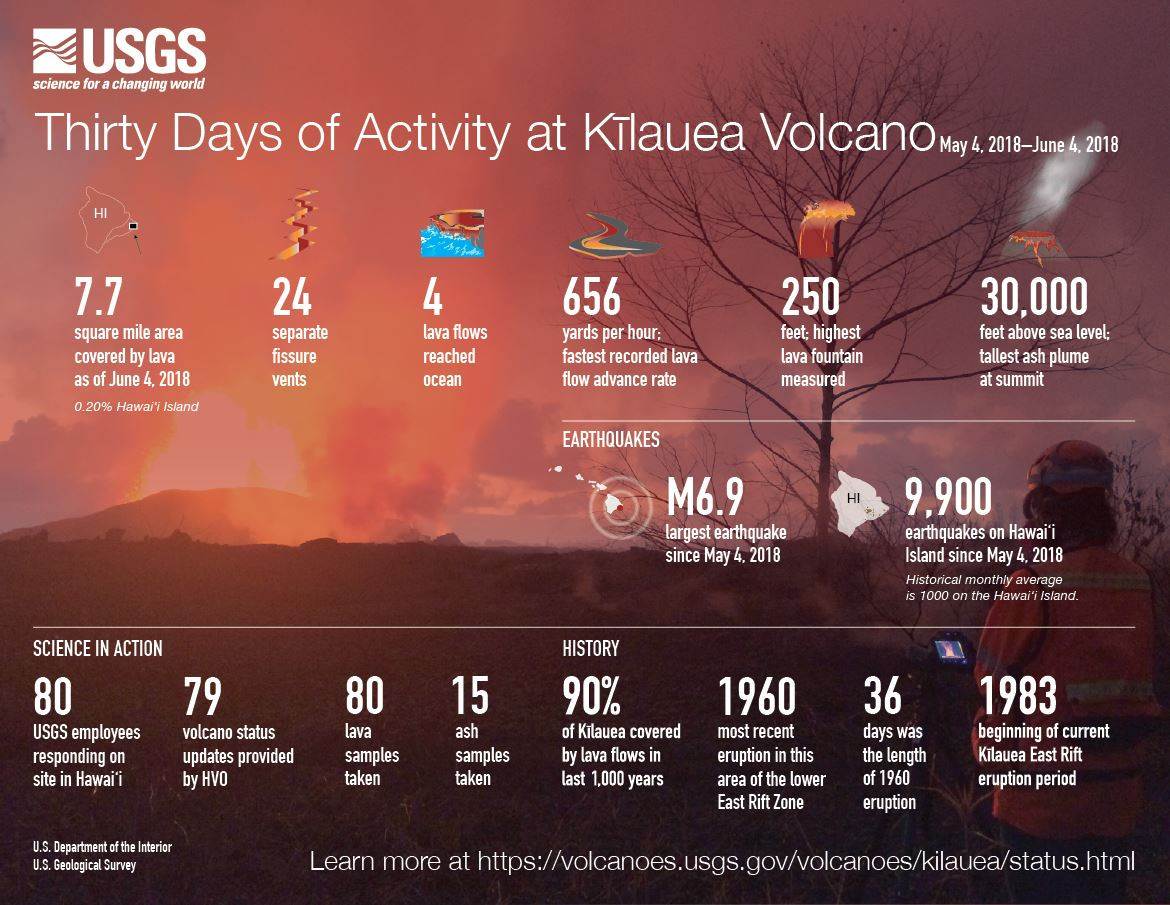 In this infographic, the USGS Hawaiian Volcano Observatory breaks down the last 30 days of fissures, lava flows, earthquakes, and explosions by the numbers.