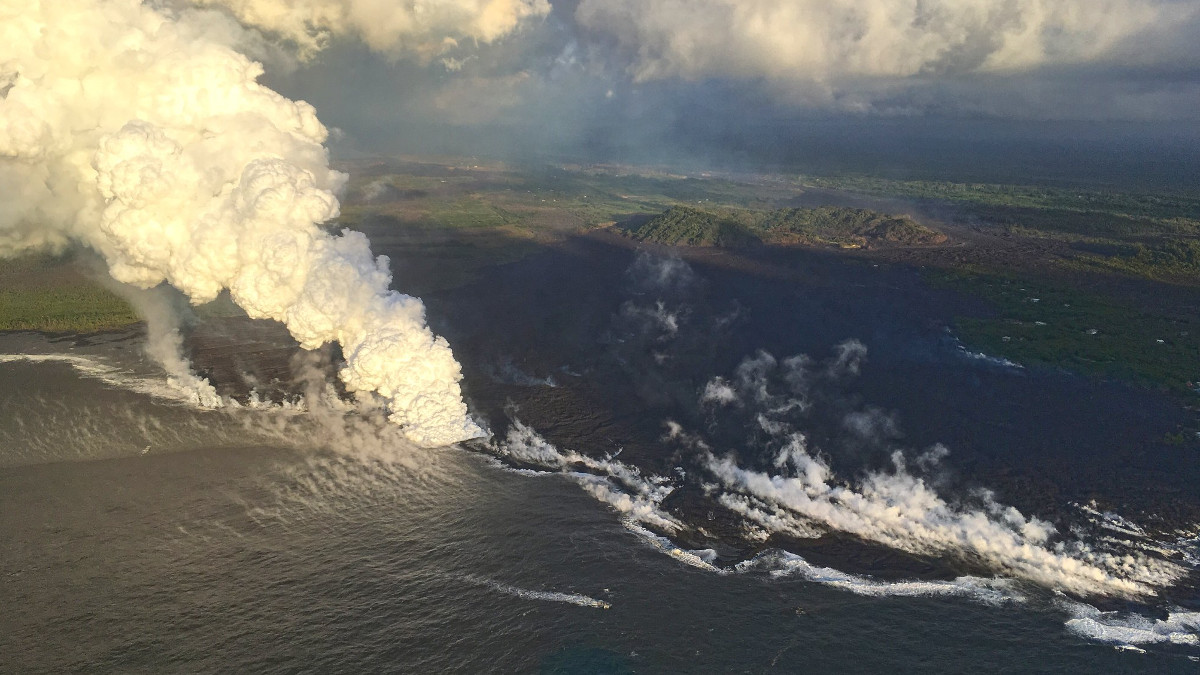 USGS: A 6:30 a.m. overflight on June 6 confirms the Vacationland area is completely covered by lava. 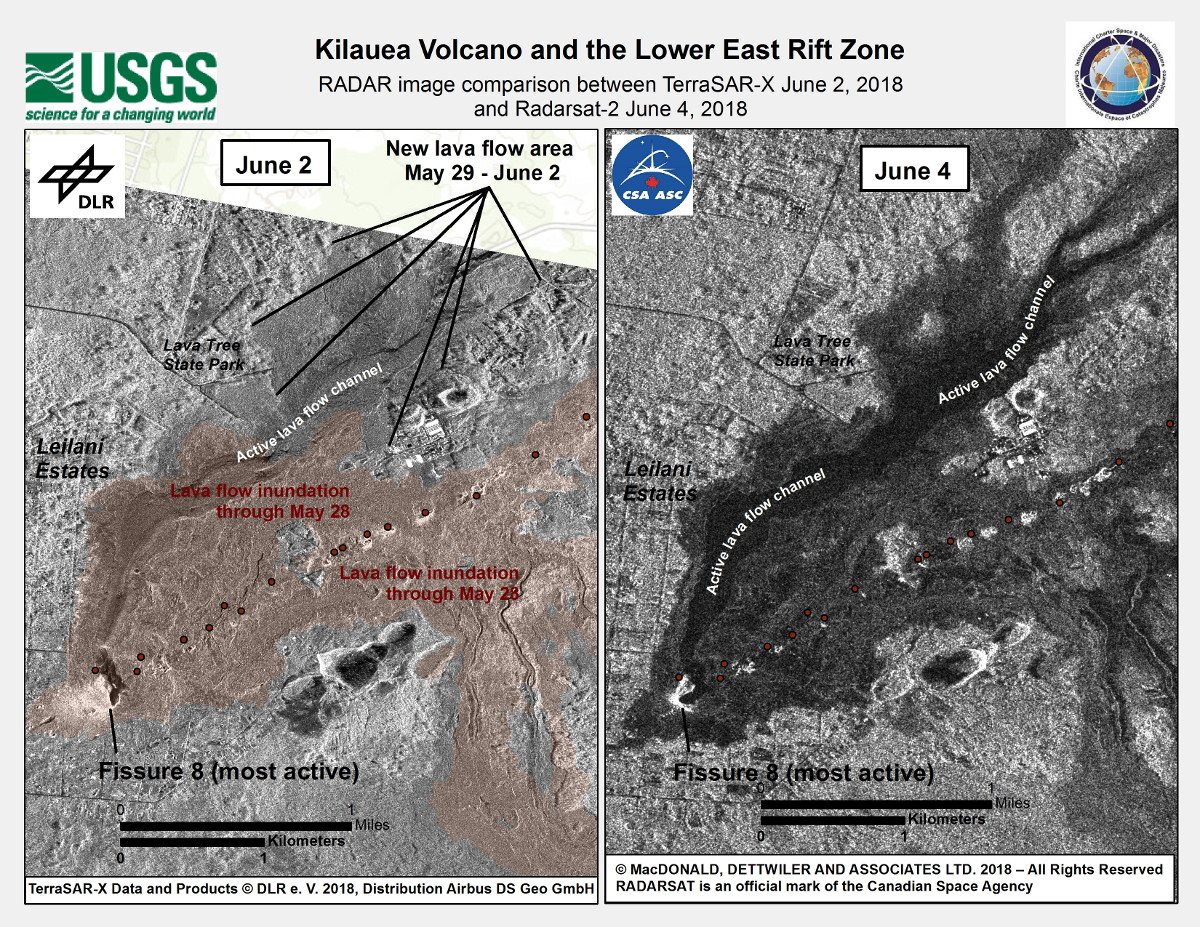 USGS: The International Charter for Space and Major Disasters (https://disasterscharter.org/) is a means for space agencies around the world to help with disaster monitoring by providing satellite data to responders and scientists on the ground. The charter was invoked for recent eruptive activity at Kīlauea, and numerous space agencies are providing satellite imagery that HVO scientists are using to help evaluate eruptive activity. In this example, high-resolution radar data from the German TerraSAR-X satellite acquired on June 2 (left) and from the Canadian RADARSAT-2 satellite on June 4 (right) show the area of the fissure 8 lava flow, which appears as a darkened area in both images. We are grateful to our colleagues and partners at space agencies worldwide for their help in better tracking activity at Kīlauea.

An overflight this morning confirms the Vacationland area of Kapoho is completely covered by lava, and flows have extended 100 yards north in Kapoho Beach Lots. The lava is entering the ocean at Vacationland, USGS reports. 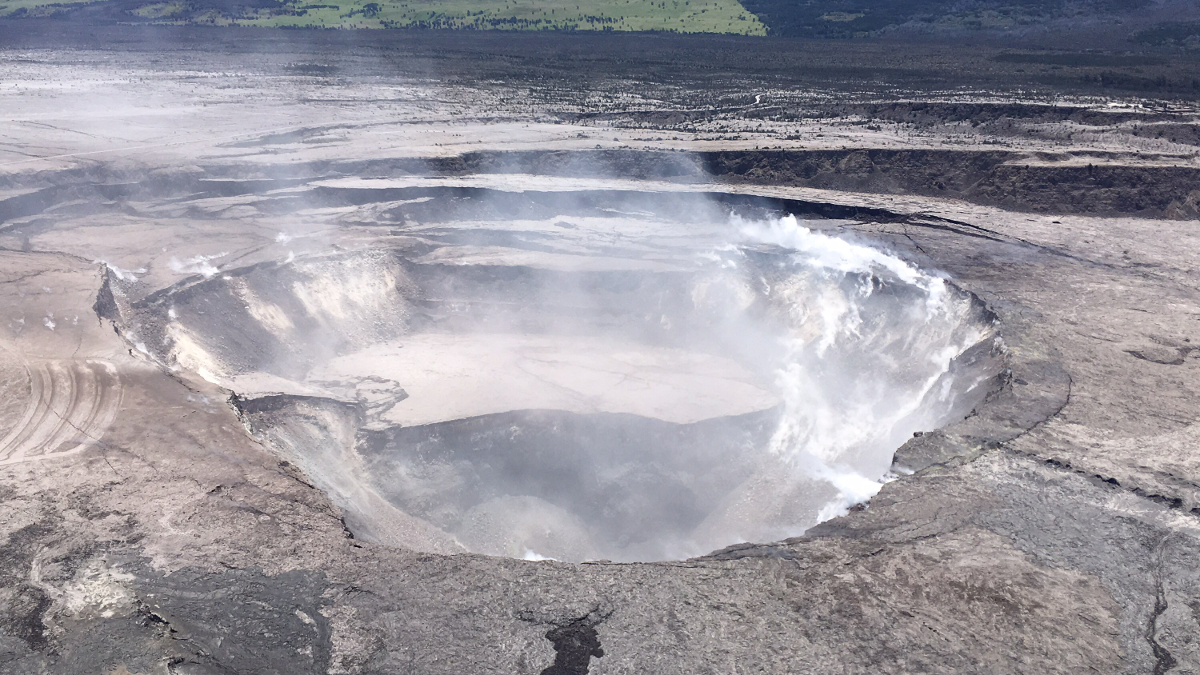 USGS: HVO scientists captured this aerial view of a much-changed Halema‘uma‘u during their overflight of the summit this afternoon. Explosions and collapse within Halema‘uma‘u have enlarged the crater (foreground) that previously hosted the summit lava lake, and the far rim of Halema‘uma‘u has dropped with continued summit deflation. The parking area for the former Halema‘uma‘u Overlook (closed since early 2008 due to volcanic hazards) can be seen to the left of the crater.

USGS Hawaiian Volcano Observatory deputy scientist-in-charge Steve Brantley gave an update on the activity on the lower East Rift Zone and at the summit during a public meeting Tuesday night in Pahoa.

One of the hundreds to lose a home in the Kapoho lava flow was Mayor Harry Kim. He spoke to the public Tuesday night in Pahoa.

Spiritual leader Kahu Piilani Kaawaloa also offered her perspective, before she shared an opening pule in which she prayed for relief for the people affected by the eruption.

Hawaii County Civil Defense administrator Talmadge Magno and Don Smith with the Hawaii Department of Transportation gave an update Tuesday night on the restricted areas and evacuation zones in place, as well as the ongoing efforts to create emergency routes in case Highway 130 is lost. Smith said Chain of Craters is done, the Highwy 130 alternate route is driveable, and they are even working on a third alternative route.

At Tuesday’s meeting in Pahoa, the Department of Parks and Recreation gave an update on the shelter situation for people displaced by the eruption (The shelter at Pahoa Community Center is open and pet-friendly. The Keaau Armory shelter has reached capacity.) Also, the Planning Department talked about the approach the county is taking to move evacuees from the shelters and into temporary emergency housing.

Governor David Ige signed a Second Supplementary Proclamation on June 5, adding “housing and law-enforcement provisions to ensure the health and safety of the people who have been most affected by the ongoing Kīlauea eruption.”

The State Representative for the Puna district, Joy. A. San Buenaventura, issued this media release Tuesday:

Representative Joy. A. San Buenaventura says housing and basic sanitation are the most pressing problems for hundreds of Puna residents forced from the homes by the continuing lava flow through the Hawaii Island community. She is happy that Governor David Ige has helped fast-track repairs to 14 vacant housing units which will provide shelter and showers for some residents and believes much more is needed.

“Our neighbors are suffering and it is up to us to do everything we can to help,” said San Buenaventura (Puna). “I’m asking everyone to keep their eyes and ears open to any possible housing solutions for those in need. We have to be creative and we have to act quickly.”

The day after the 2018 legislative session ended, Rep. San Buenaventura flew home to Puna to check on Leilani Estates residents staying at evacuation centers. While at the Keaau Community Center she found out there were no showers on site and no transportation to the nearest public showers in Hilo, 8 miles away.

She spoke with the manager at Hale O Puna, (a federally funded senior housing facility) across the street about any vacant apartment showers that could be used for the senior or disabled evacuees.

“I found out there were 14 vacant units, but they were in disrepair for more than a year and six would require major construction to be used,” San Buenaventura said. ”

During a by House Leadership visit on May 10, the units were inspected and found to be built of concrete hollow-block materials and were structurally sound even if the cabinets were termite-eaten.

Representative San Buenaventura is pleased that Governor David Ige and the Hawaii Public Housing Authority recently announced that the 14 units have been fast-tracked for seniors.

“This is just the start toward more permanent housing relocation for those whose homes were destroyed,” she said.

San Buenaventura and a group of government, non-profit organizations and volunteers called DART: Disaster Assistance and Recovery Team have been meeting weekly to proactively look for housing solutions.

1. A waiver of the Transient Accommodations Tax for a period from now until one month after the emergency declaration has ended for rentals of less than 180 days for those who live in the evacuated zones; and

2. Allow tenants to waive the landlord-tenant code (HRS Chapter 521) such as deposit, notice, termination, and covenants of habitability to streamline the rental process.

She also requested that Ige quickly sign into law Senate Bill 2401 to build Ohana Zones for our homeless residents and freeing up much needed housing.

One of the challenges facing the Kapoho area in the hours before it was covered by lava was reaching potential evacuees who were likely without electric power and/or cell phone service, due to the loss of transmission infrastructure as a result of the eruption. At Tuesday’s meeting in Pahoa, Kevin Waltjen of the Hawaii Electric Light Company and Monty Graham of the Department of Homeland Security gave an update on the availability of services in the affected area.

According to Hawaii County Clerk Stewart Maeda, there will be a proclamation on June 7 that will designate voting precincts 04-03 and 04-04, which are the Pahoa Commuity Center and the Pahoa High & Intermediate School, will be all-mail precincts.

The county will be mailing out letters with info on updating voter registration on June 12. Absentee ballots go out to voters on June 25.