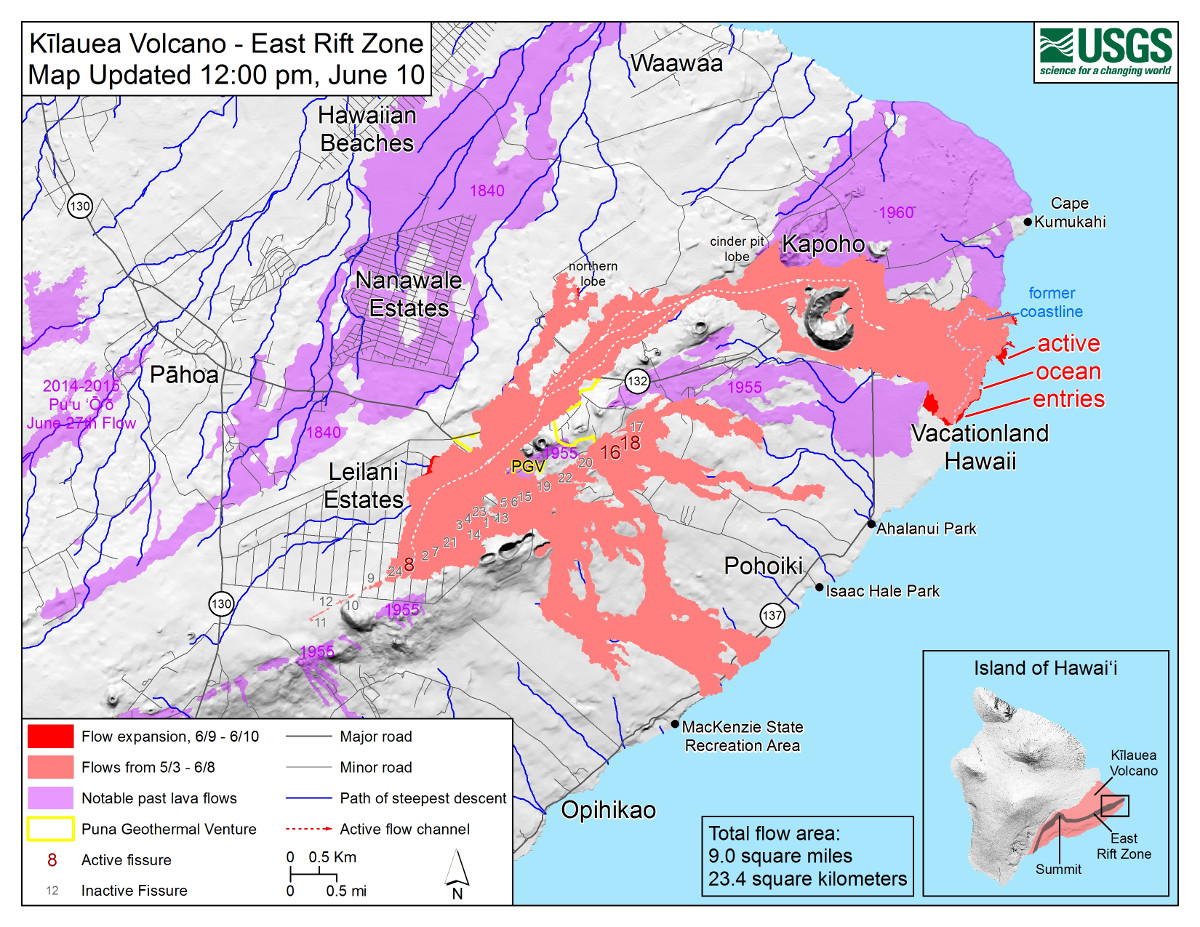 
(BIVN) – Fissure 8 continues to erupt vigorously, scientists say, with lava streaming through a channel – ranging from about 100 to 300 yards wide in places – that reaches the ocean at Kapoho Bay. The width of the active part of the lava channel varies along its length, but ranges from about 100 to 300 meters (yards) wide. 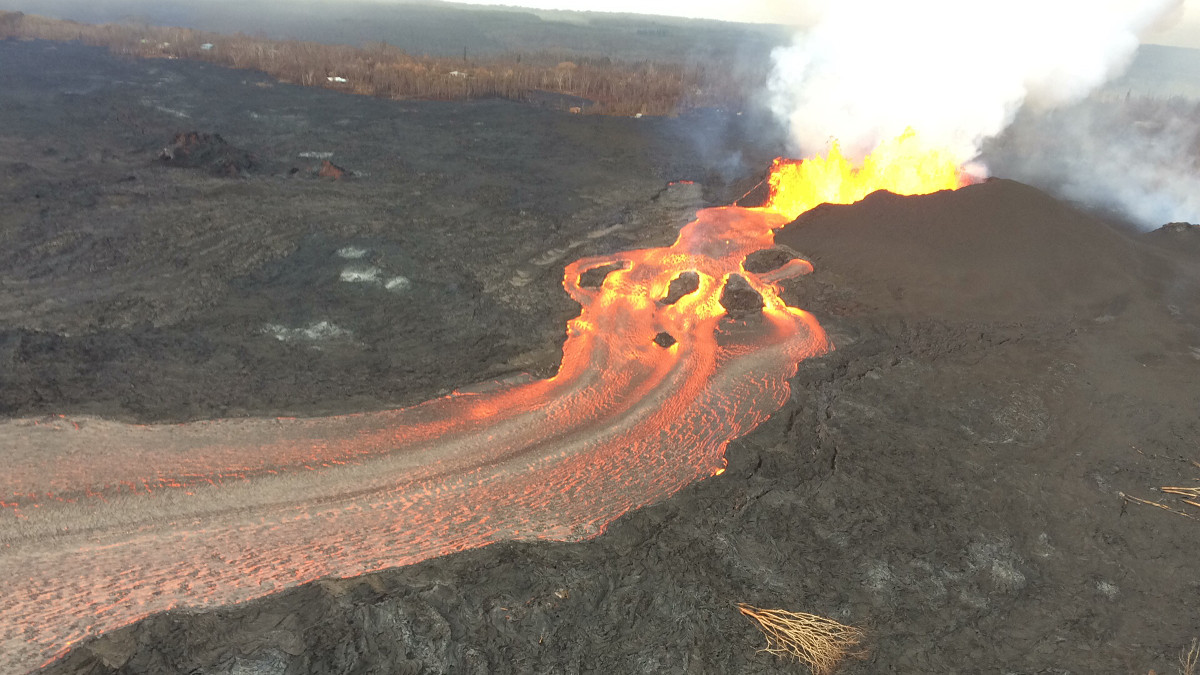 USGS: A clear view of the cinder-and-spatter cone that’s building around the vent from ongoing lava fountains can be seen here.

“Yesterday’s measurements show that gas emissions from the fissure system have nearly doubled, possibly indicating an increase in eruption rate from Fissure 8,” scientists noted. Trade wind conditions are expected to bring vog to the south and west sides of the Island of Hawaii. 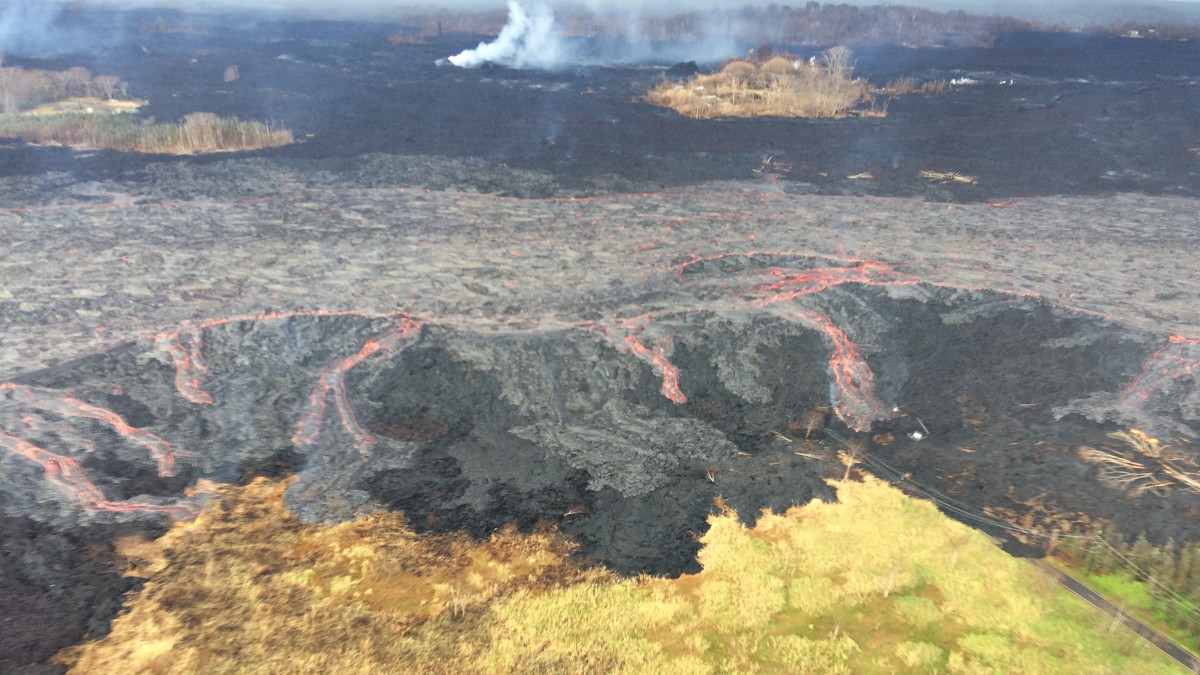 USGS: Overflows of the upper fissure 8 lava channel this morning sent small flows of lava down the levee walls.

During the day, minor spillovers have dribbled over the Fissure 8 channel levees but have generally stalled before reaching ground not covered by previous lava flows, scientists reported. Channel overflows, like the one shown in the photo above, add layers of lava to the channel levees, increasing their height and thickness, the USGS HVO says.

During this morning’s overflight, HVO geologists observed no new breakouts of lava near Bryson’s cinder quarry.

Government Beach Road, between Kahakai Boulevard and Cinder Road is open only to residents of Waa Waa and Papaya Farms Road with official credentials. Civil defense says there is no curfew. 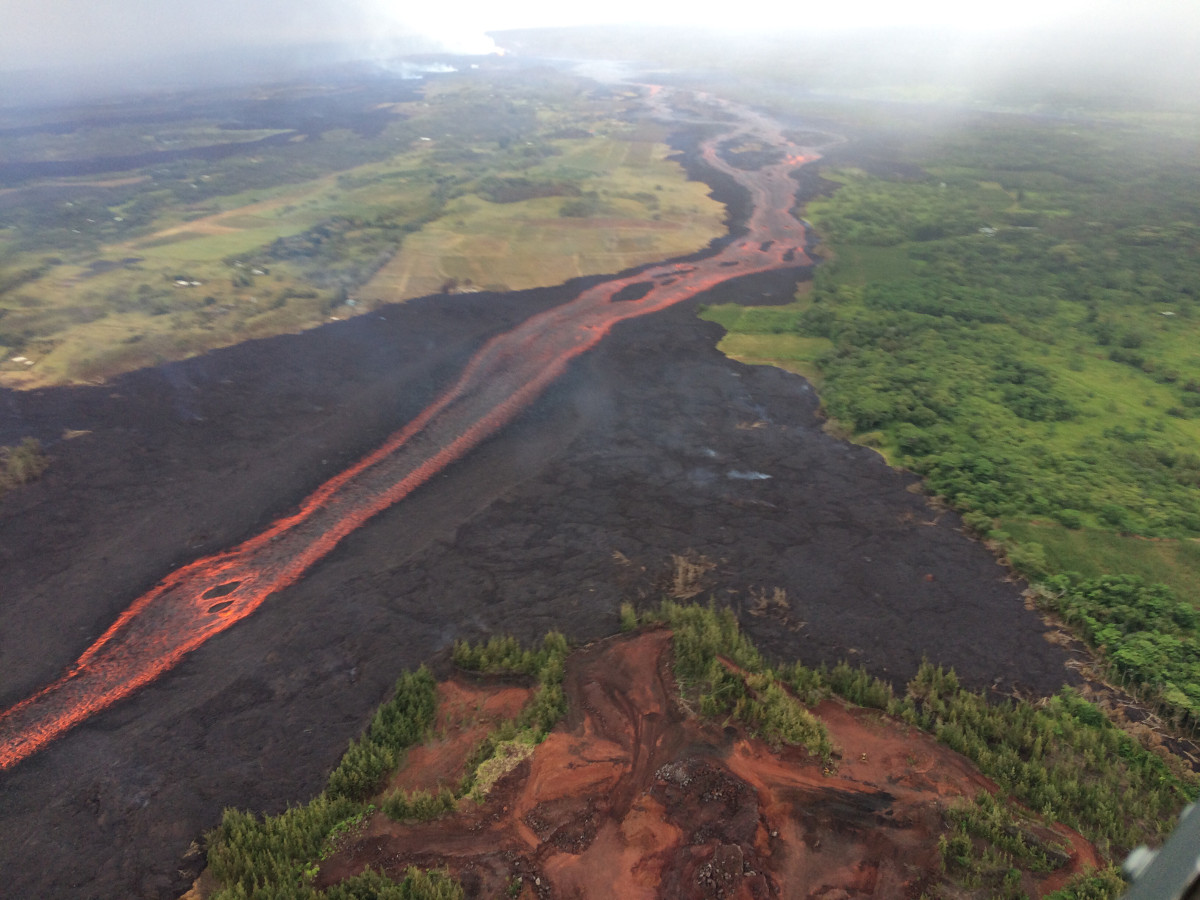 USGS: A closer view of the fissure 8 lava channel with the cinder quarry more clearly visible in the foreground (bottom of photo). During this morning’s overflight, HVO geologists observed no new breakouts of lava near this quarry.

A lava delta continues to grow at Kapoho as lava enters the sea. “The largest white laze plume marks the main point where lava is entering the sea, but smaller active entry points persist along the entire leading margin of the flow,” USGS reported. 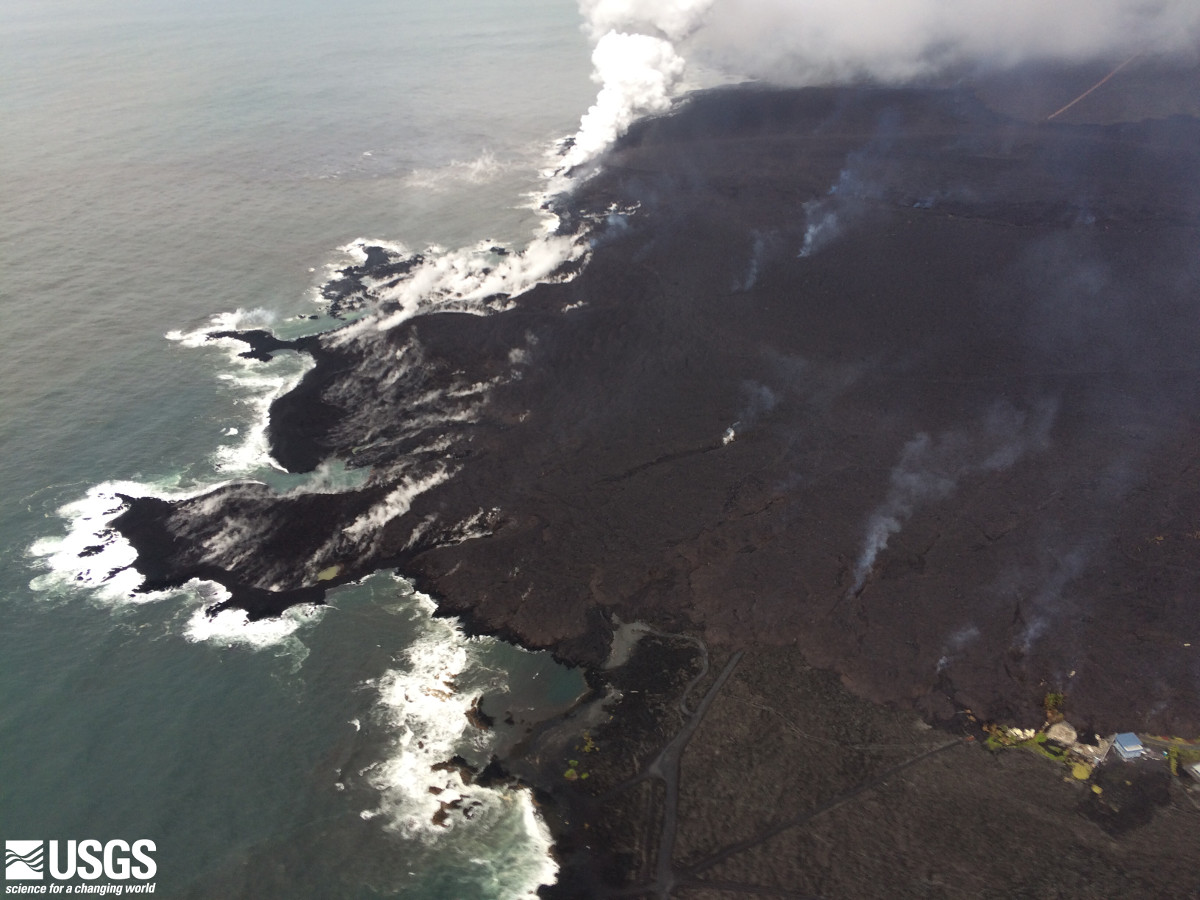 USGS: A closer aerial view of the lava delta forming at the Kapoho Bay ocean entry, where fissure 8 lava continued enter the ocean as of this morning.

There have been no ash emissions at the Kilauea summit since dawn, USGS says, “however, wind has remobilized ash in the caldera. Seismicity and earthquake rates have increased over the course of the day. Inward slumping of the rim and walls of Halema`uma`u continues in response to ongoing subsidence at the summit.” 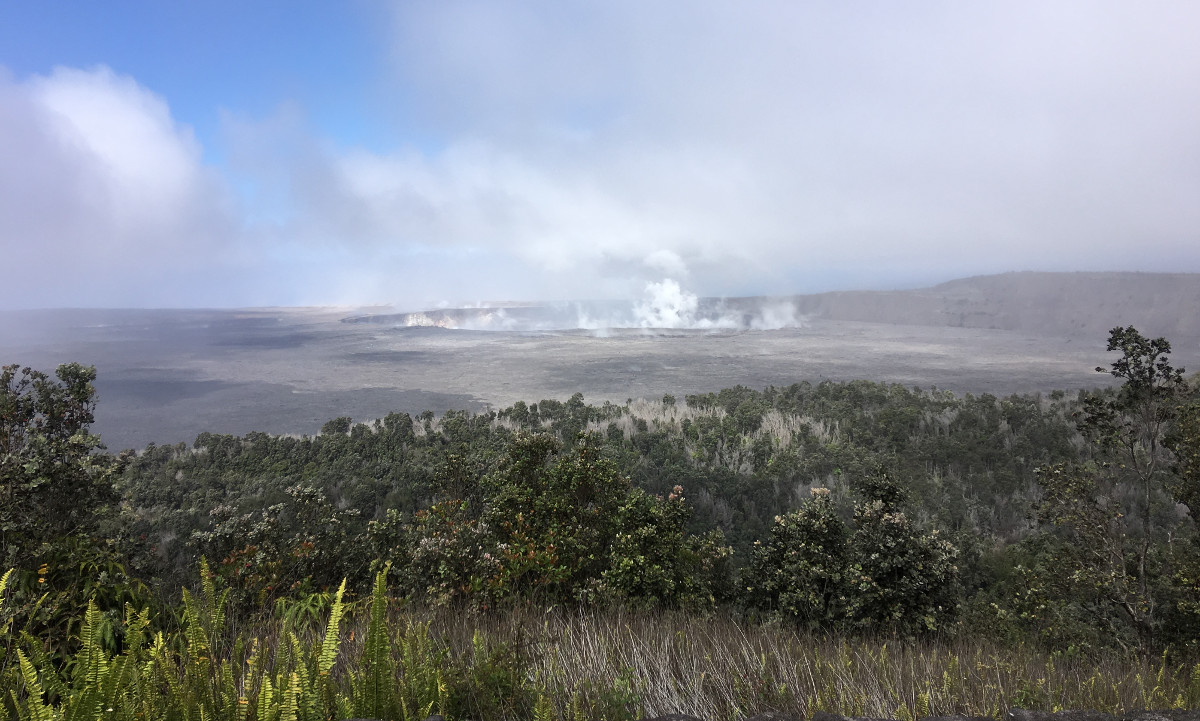 USGS: Following the explosion, summit activity consisted mostly of passive degassing at Halema‘uma‘u, similar to what is shown in this image taken mid-morning.

“Sulfur dioxide emissions from the volcano’s summit have dropped to levels that are about half those measured prior to the onset of the current episode of eruptive activity,” USGS said at 4 p.m. “This gas and minor amounts of ash are being transported downwind, with small bursts of ash and gas accompanying intermittent explosive activity.”