HILO, Hawaii - USGS Hawaiian Volcano Observatory scientist Jim Kauahikaua provided media an update on the volcanic eruption in Puna as well as the dramatic changes occurring at the summit. 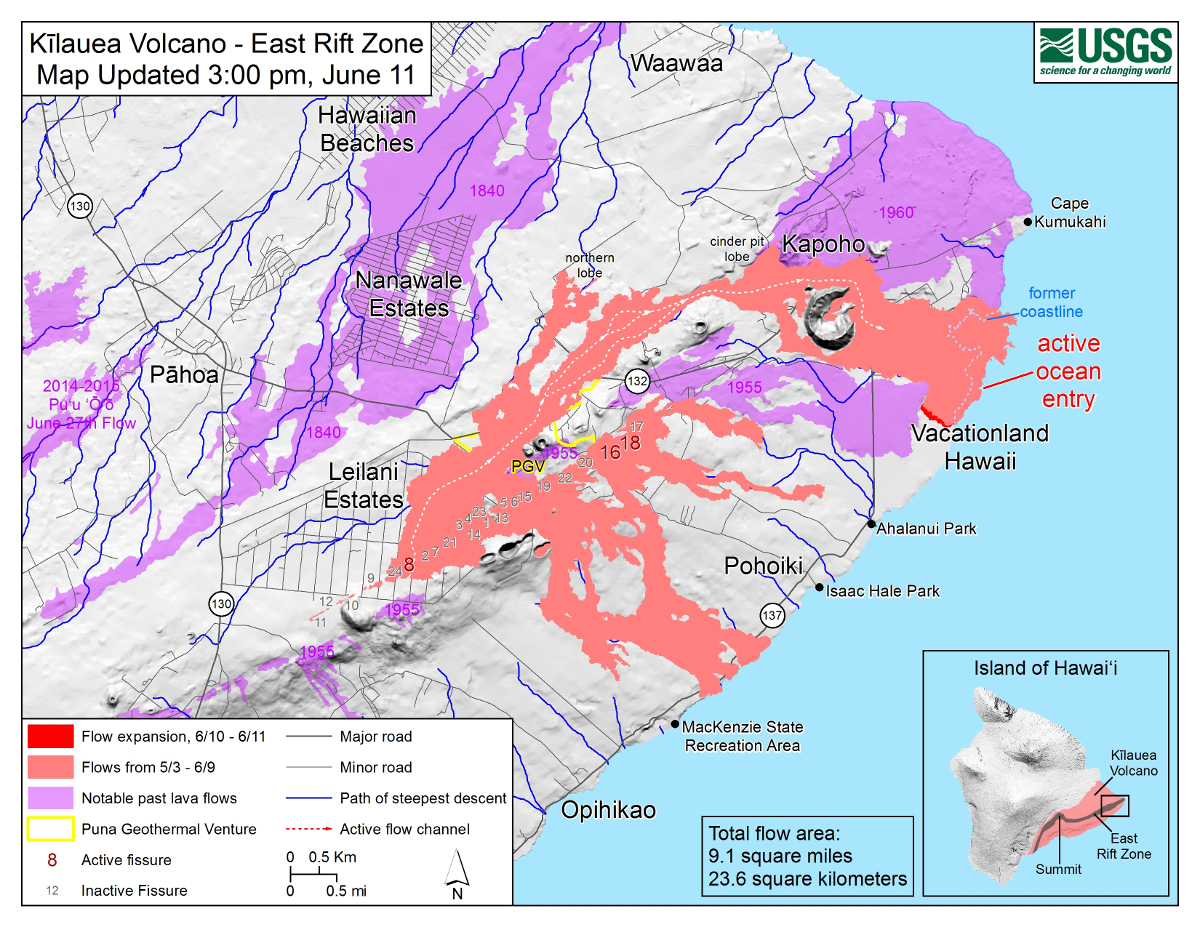 (BIVN) – An update on the ongoing eruption along Kilauea Volcano’s lower East Rift Zone, as well as the dramatic changes occurring at the summit, was provided by USGS Hawaiian Volcano Observatory scientist Jim Kauahikaua during a media conference in Hilo on Monday.

Eruption of lava continues from the lower East Rift Zone (LERZ) fissure system in the area of Leilani Estates.

Three closely spaced lava fountains at Fissure 8 are erupting with fluctuating heights from below the 115 ft high spatter cone around it up to 180 feet. Lava continues to be fed into the channelized flow trending north and then east to a single ocean entry at Kapoho. Weak lava activity at Fissures 16/18 was observed last night. This morning’s overflight confirms that fountaining continues at Fissure 8 and that its channel is nearly full with no spillovers. Minor steam explosions were observed at the ocean entry.

The most recent map of lava flows can be found [here].

HVO field crews are on site tracking the fountains, lava flows, and spattering from Fissure 8 as conditions allow and are reporting information to Hawaii County Civil Defense. Observations are also collected on a daily basis from cracks in the area of Highway 130; no changes in temperature, crack width, or gas emissions have been noted for several days.

Volcanic gas emissions remain very high from Fissure 8 eruptions. Gas emissions have increased over the past two weeks. Trade wind conditions are expected to bring vog to the south and west sides of the Island of Hawaii.

The ocean entry is a hazardous area. Venturing too close to an ocean entry on land or the ocean exposes you to flying debris from sudden explosive interaction between lava and water. Also, the lava delta is unstable because it is built on unconsolidated lava fragments and sand. This loose material can easily be eroded away by surf, causing the new land to become unsupported and slide into the sea. Additionally, the interaction of lava with the ocean creates “laze”, a corrosive seawater plume laden with hydrochloric acid and fine volcanic particles that can irritate the skin, eyes, and lungs.

Magma continues to be supplied to the lower East Rift Zone. Seismicity remains relatively low in the area with numerous small magnitude earthquakes and low amplitude background tremor. Higher amplitude tremor is occasionally being recorded on seismic stations close to the ocean entry.

Additional ground cracking and outbreaks of lava in the area of the active fissures are possible. Residents downslope of the region of fissures should heed all Hawaii County Civil Defense messages and warnings.

Seismicity levels have been increasing since the most recent small explosion at 4:43 AM this morning. There have been no ash emissions since that early morning event. Inward slumping of the rim and walls of Halema`uma`u continues in response to ongoing subsidence at the summit.