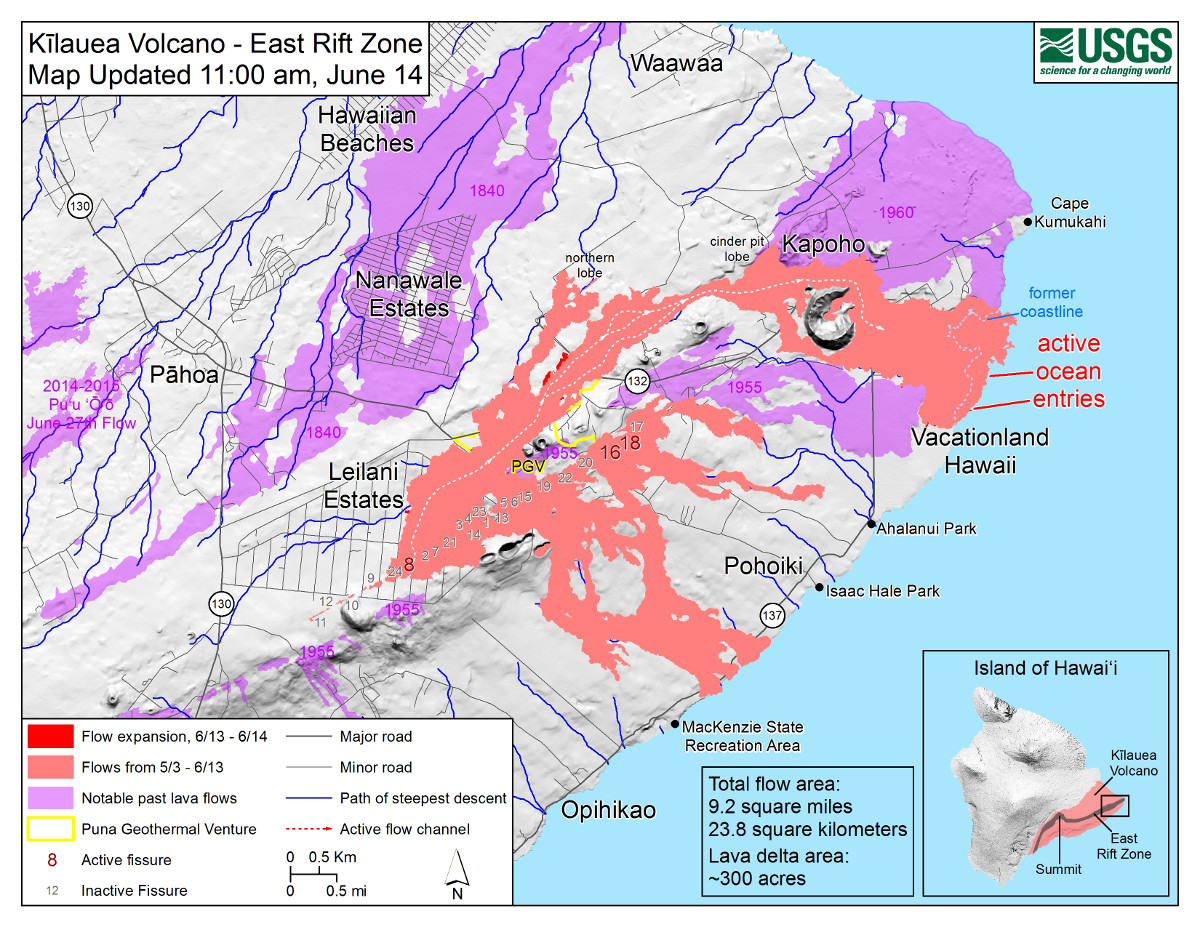 
(BIVN) – There hasn’t been much change in the lava eruption along lower East Rift Zone in Leilani Estates over the past few days, scientists say. From this morning’s USGS Hawaiian Volcano Observatory update:

Fissure 8 lava fountains were observed reaching heights of 200 ft from within the growing cone of cinder and spatter, which is now about 160 ft at its highest point. Lava from Fissure 8 continues to flow through the well-established channel to the ocean at Kapoho, with rare, small overflows of the channel levees. A morning overflight confirmed that activity at the vent and channel continued with no significant changes. The ocean entry remained fairly broad with one main entry and several minor ones. A laze plume at the ocean entry was blown onshore this morning, and areas of upwelling offshore were present. Fissures 16 and 18 continue to ooze lava.

Inward slumping of the rim and walls of Halema`uma`u continues in response to ongoing subsidence at the summit, USGS says.

On the 11 a.m. media conference call today, University of Hawaiʻi at Hilo volcanologist Cheryl Gansecki provided a few interesting updates on the chemistry of the lava being erupted. Gansecki’s team is providing critical information to U.S. Geological Survey scientists responding to the Kīlauea eruption by providing real-time chemistry analysis of lava samples that help determine how the lava will behave and how fast it will move, the university says.

The lava currently being erupted “includes visible olivine crystals, though they are very small,” Gansecki said, “some of which are beginning to look like the type of olivine we were seeing in the summit lava lake before it drained away. So at this point, we may be starting to see summit magma arriving in the system so that’s something we’ll be checking.”

Gansecki’s comment on olivine crystals gave rise to a question about a viral tweet that inspired a series of news stories about “green gems” falling from the sky during the eruption.

“There is not olivine raining from the sky,” Gansecki said, “except in clumps of lava. So if you happen be where tephra is falling from the sky, there is tiny olivines embedded in it. But you probably aren’t going to see them.”

“We did see see this Twitter post,” Gansecki said. “The pictures they show of these olivine are definitely not what we’re seeing in the lava. Those are from older Picrite lava. There’s a few eruptions that have happened in the past that have just tons of olivine in them, and those are like the 1840’s flow, or think of Green Sand Beach, also Mauna Loa. Those have huge amounts of pretty big olivine. What we’re seeing are tiny, and they do not separate from the lava themselves. So you have to crush the lava get them out and find them.”

“I think this is pretty much a non-story, unfortunately,” Gansecki said, adding that such an occurrence of gems falling from the sky “would be fun.”