PUNA, Hawaii - Even from afar, the eruption - which has taken hundreds of homes in the Kapoho area - continues to impact the residents who were displaced by the lava flow. 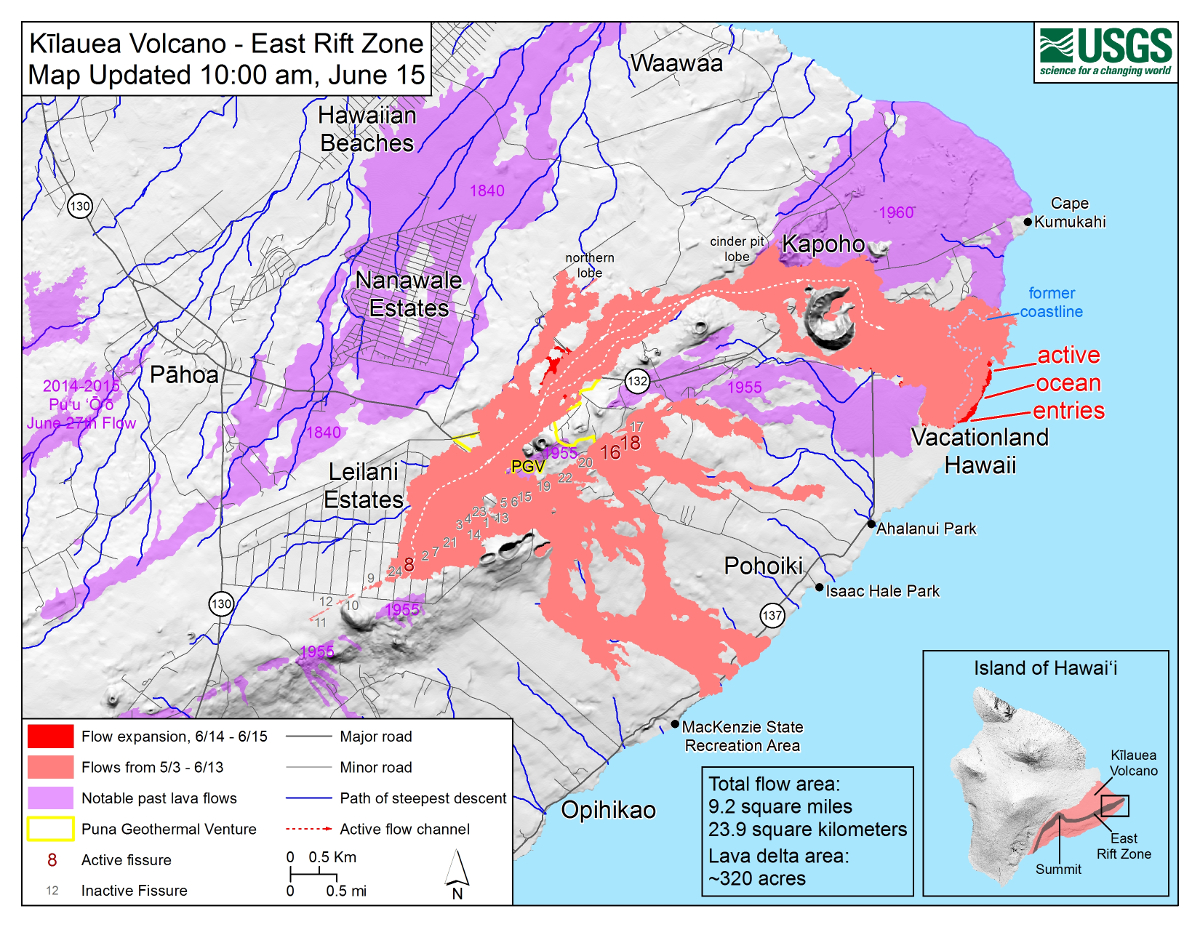 (BIVN) – The eruption of lava continues from the lower East Rift Zone in Leilani Estates, and the ocean entry at Kapoho is producing a large plume that seems to be affecting the weather in the Puna-area.

During an 11 a.m. media conference call, National Weather Service meteorologist Tom Birchard talked about how the plume was contributing to “a good portion of cloud-cover over the eastern third of the Big Island this morning.”

Even from afar, the eruption – which has taken hundreds of homes in the Kapoho area – continues to impact the residents who were displaced by the lava flow. “We’ve gotten reports of some pretty good rainfall in the Pahoa area having some impact with the shelters,” Birchard said, “apparently, some of the evacuees have needed pallets to get their stuff out of the puddles that are forming. A lot of that rain is actually being generated by the cloud produced by the lava ocean entry.”

“We don’t see a lot of change to that during the short term,” Birchard said. “Light trade winds for the most part will be taking that that plume from the lava ocean entry, and also from fissure 8, generally toward the west, potentially at times moving towards the southwest.”

A reverse flow in the trades on the west side of the island have been contributing to the vog that’s been reported in West Hawaii. In recent days, South Kona has been particularly affected.

There will be another Volcanic Ash and Vog Community Meeting at Konawaena Elementary School Cafeteria on Wednesday, June 20, at 5:30 p.m., the county says.

Since the 11 a.m. media conference call took place, another explosion appears to have occurred at the summit.

The Pacific Tsunami Warning Center reported that an earthquake that occurred at approximately 12:05 p.m. was NOT large enough to cause a tsunami for the Island of Hawaii. “Preliminary data indicates that the earthquake measuring a magnitude of 5.3 was centered in the summit region of Kilauea,” emergency officials reported. “Hawaiian Volcano Observatory reports that the ash eruption at the Kilauea Summit resulted in a small ash plume reaching 9,000 to 10,000 feet high and may affect the surrounding areas.”

From the USGS Hawaiian Volcano Observatory at 9:03 a.m. HST:

Lava fountains from Fissure 8 reached heights of 200 ft overnight. The cinder and spatter cone that is building around the fissure is now about 165 ft at its highest point. Lava is flowing through the well-established channel from fissure 8 to the ocean at Kapoho. Occasionally, lava spills over the channel levees. The ocean entry remained fairly broad with laze blown onshore. Fissures 16 and 18 continue to ooze lava.