PUNA, Hawaii - The National Weather Service reports heavy vog is blanketing the interior and southern parts of the island, impacting Hilo and wrapping around to Kona through the weekend, civil defense says.

(BIVN) – Hawaii Island is in for a voggy weekend, as the eruption of Kilauea Volcano continues at Fissure 8 in the lower East Rift Zone. “Lava now covers 5,914 acres or an area of nine and one quarter (9.24) square miles,” Hawaii County Civil Defense stated this morning. “There have been 467 homes destroyed.”

“Fissures 16 and 18 continue to ooze lava,” the USGS scientists wrote. “Fissure 8, the channel, and the ocean entry are relatively stable with only a small amount of expansion at the southern boundary of the flow near the coast and south of Vacationland.”

The USGS Hawaiian Volcano Observatory also had this update on the events at the summit, posted at 10:27 p.m. HST:

Between 6 am and noon, more than 180 earthquakes occurred in the summit area, 18 of which were stronger than magnitude-3.0. An explosive event occurred at noon today that produced an ash and gas plume to nearly 10,000 ft. Seismicity dropped abruptly after the explosive event but is expected to build up slowly over the next hours. Inward slumping of the rim and walls of Halema`uma`u continues in response to ongoing subsidence at the summit.

“The National Weather Service reports heavy vog is blanketing the interior and southern parts of the island, impacting Hilo and wrapping around to Kona through the weekend,” this morning Hawaii County Civil Defense message stated. Officials offered the following guidance:

Even as the eruption continues in Leilani Estates, government is moving forward with recovery efforts.

“Residents of Hawai‘i County who suffered damage or losses from the recent Kilauea volcanic eruption and earthquakes, can now register for disaster assistance with the Federal Emergency Management Agency (FEMA),” civil defense repeated this morning.

The following was provided by county officials:

Shuttle buses will run on the following schedules from 7:30 a.m. to 9 p.m. 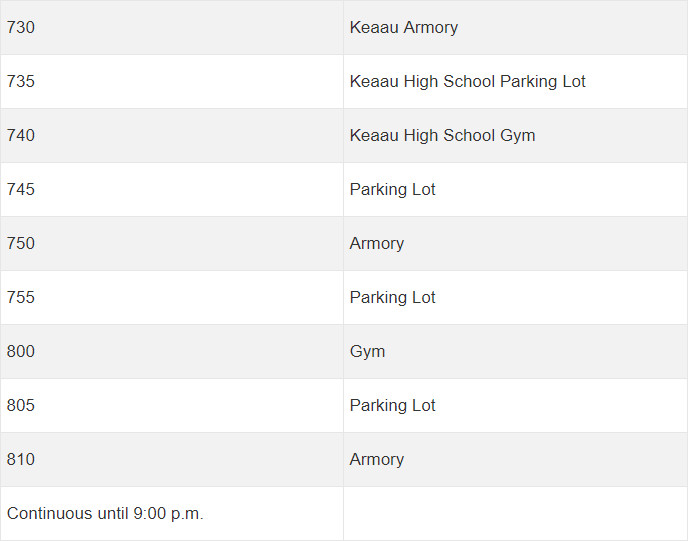 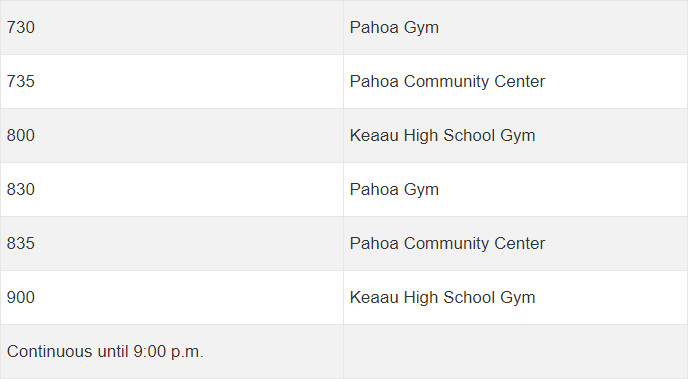