HAWAII ISLAND - Once again, heavy vog is blanketing the interior and southern parts of the island, impacting Hilo and wrapping around to Kona through the weekend, emergency officials say. 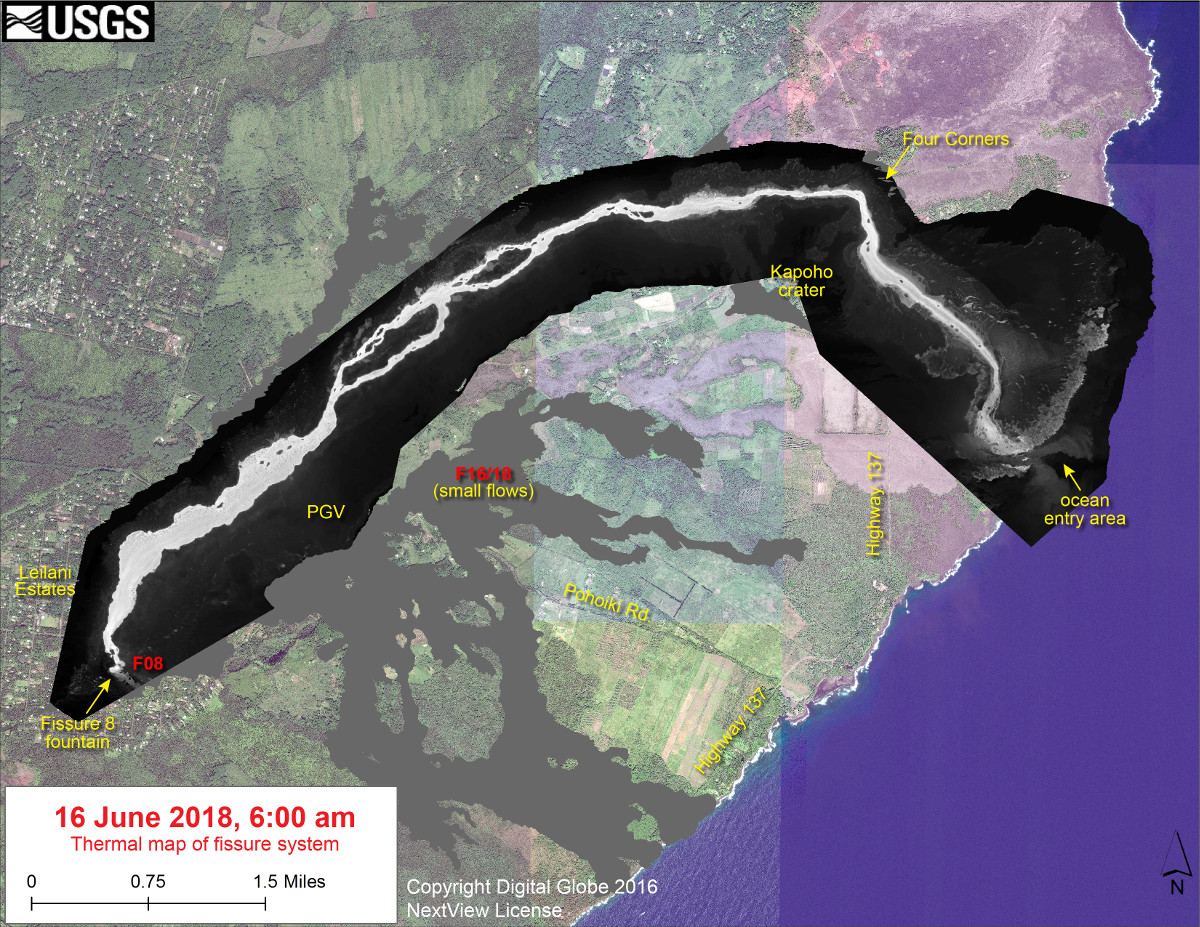 USGS: This thermal map shows the fissure system and lava flows as of 6 am on Saturday, June 16. The fountain at Fissure 8 remains active, with the lava flow entering the ocean at Kapoho. Very small, weak lava flows have been active recently near the Fissure 16/18 area. The black and white area is the extent of the thermal map. Temperature in the thermal image is displayed as gray-scale values, with the brightest pixels indicating the hottest areas. The thermal map was constructed by stitching many overlapping oblique thermal images collected by a handheld thermal camera during a helicopter overflight of the flow field. The base is a copyrighted color satellite image (used with permission) provided by Digital Globe.

The wind is blowing in the southwest direction and ash may affect the areas of Volcano and Ka’u, Hawaii County Civil Defense said. Officials provided this information:

Hawaiian Volcano Observatory reports that the eruption activity continues at Fissure 8 in the lower East Rift Zone. Lava is entering the ocean at Kapoho Bay and producing a large laze plume. Heavy vog is blanketing the interior and southern parts of the island, impacting Hilo and wrapping around to Kona through the weekend.

Due to the hazardous air quality conditions, officials provided the following guidance:

According to the Hawaii Department of Land and Natural Resources, officers issued another dozen citations over the past ten days. Those cited now face higher penalties. From a DLNR media release:

The urge to get up close and personal to lava during the current Kilauea eruption is not only unsafe but people who get caught now potentially face steep fines and jail time.

Earlier this month Governor David Ige issued a supplemental proclamation which provides fines of up to $5,000 and potentially a year in jail for people convicted of loitering in a closed area. In the proclamation Governor Ige stated, “I find there is a need to strengthen the enforcement tools available to county and state emergency management officials in controlling public access to dangerous areas and associated evacuation efforts as a result of the failure of the public to comply with instructions and orders issued by officials.”

Prior to the enactment of more severe penalties, officers from the DLNR Division of Conservation and Resources Enforcement (DOCARE) had issued more than three dozen people citations. Some of the people cited over the past week and a half in various closed areas could face the new penalties if convicted.

During patrols DOCARE officers often have to put on gas masks to protect themselves from the noxious volcanic gasses being created by lava, DLNR said, noting that fast flowing lava can cut off escape routes putting both rescuers and loiterers at great risk.

With the latest round of citations officers have now cited nearly 40 people since the East Rift Zone eruption began in early May, the state says.

Residents of Hawai‘i County who suffered damage or losses from the recent Kilauea volcanic eruption and earthquakes, can now register for disaster assistance with the Federal Emergency Management Agency (FEMA).

According to county officials: