HAWAII ISLAND - Short-lived overflows of lava from the established channel occur periodically but generally do not travel beyond the existing flow field, the USGS Hawaiian Volcano Observatory says. 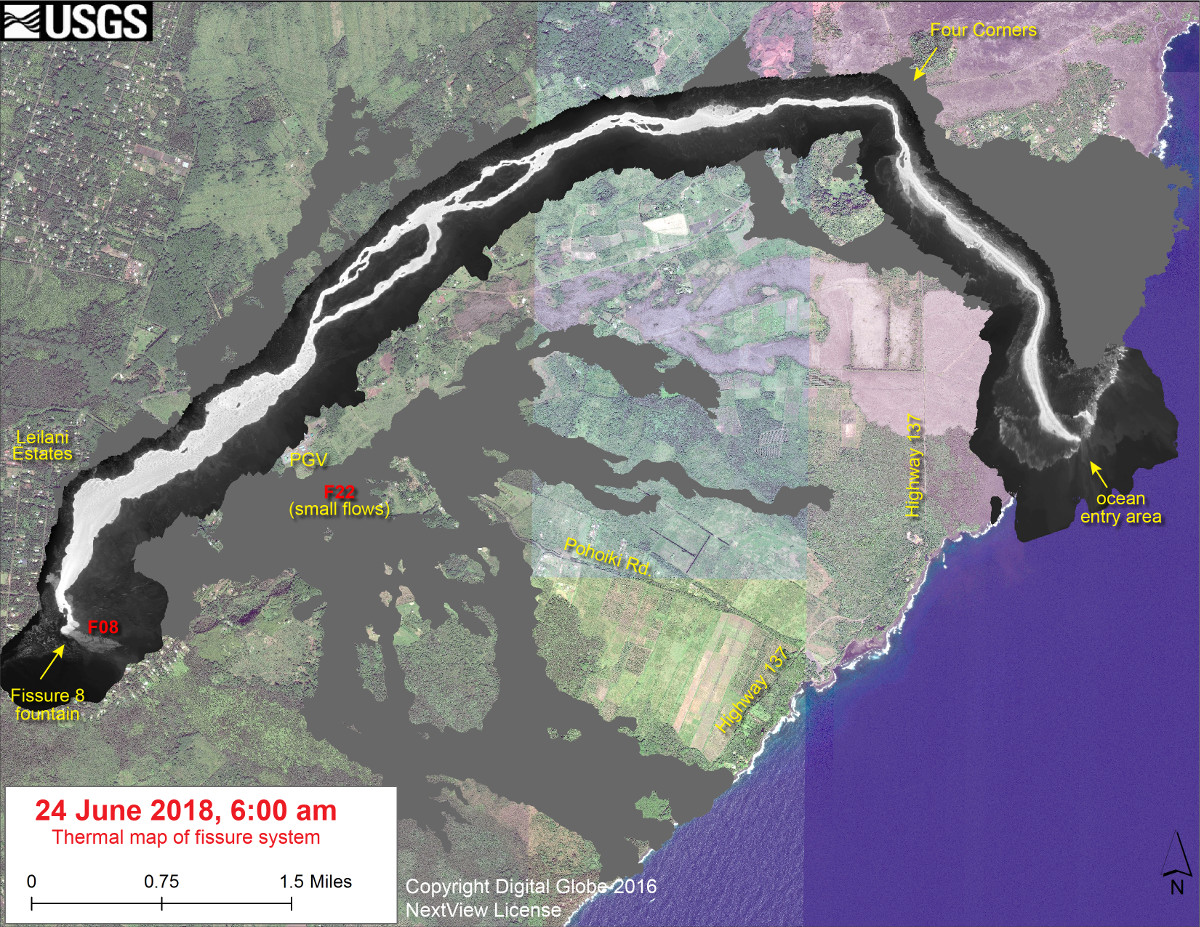 USGS: This thermal map shows the fissure system and lava flows as of 6 am on Sunday, June 24. The fountain at Fissure 8 remains active, with the lava flow entering the ocean at Kapoho. The black and white area is the extent of the thermal map. Temperature in the thermal image is displayed as gray-scale values, with the brightest pixels indicating the hottest areas. The thermal map was constructed by stitching many overlapping oblique thermal images collected by a handheld thermal camera during a helicopter overflight of the flow field. The base is a copyrighted color satellite image (used with permission) provided by Digital Globe.

(BIVN) – Ground and aerial observations show no significant changes in the lava flow field from Fissure 8 to the ocean entry, scientists say.

“Currently, there is no immediate threat,” emergency officials repeated on Monday, “but persons near the active flow should be prepared and heed warnings from Civil Defense.”

One small overflow from Fissure Eight “sent lava directly toward our home last night!” exclaimed Mick Kalber, the videographer behind the daily Tropical Visions / Paradise Helicopter aerial video. “A sizable flow to the northwest of the cone spilled lava down the river bank toward the homes on Nohea Street. Ours is on Kupono… just one street up. Fortunately by morning, the substantial outbreak had stalled, just before leaving the flow field… but nearly reaching a home nearby,” Kalber wrote in a late Sunday message.

Short-lived overflows of lava from the established channel occur periodically but generally do not travel beyond the existing flow field, the USGS Hawaiian Volcano Observatory wrote.

Disaster assistance is available island-wide to individuals and businesses in Hawaii County that have been affected by the Kilauea eruption, civil defense says. The Disaster Recovery Center is open daily from 8 a.m. to 8 p.m., and is located at the Keaau High School Gym.