PUNA, Hawaii - Video taken by Mick Kalber from a helicopter shows lava is active in Kapoho Beach Lots, while Fissure 22 has come back to life with spattering and short flows. 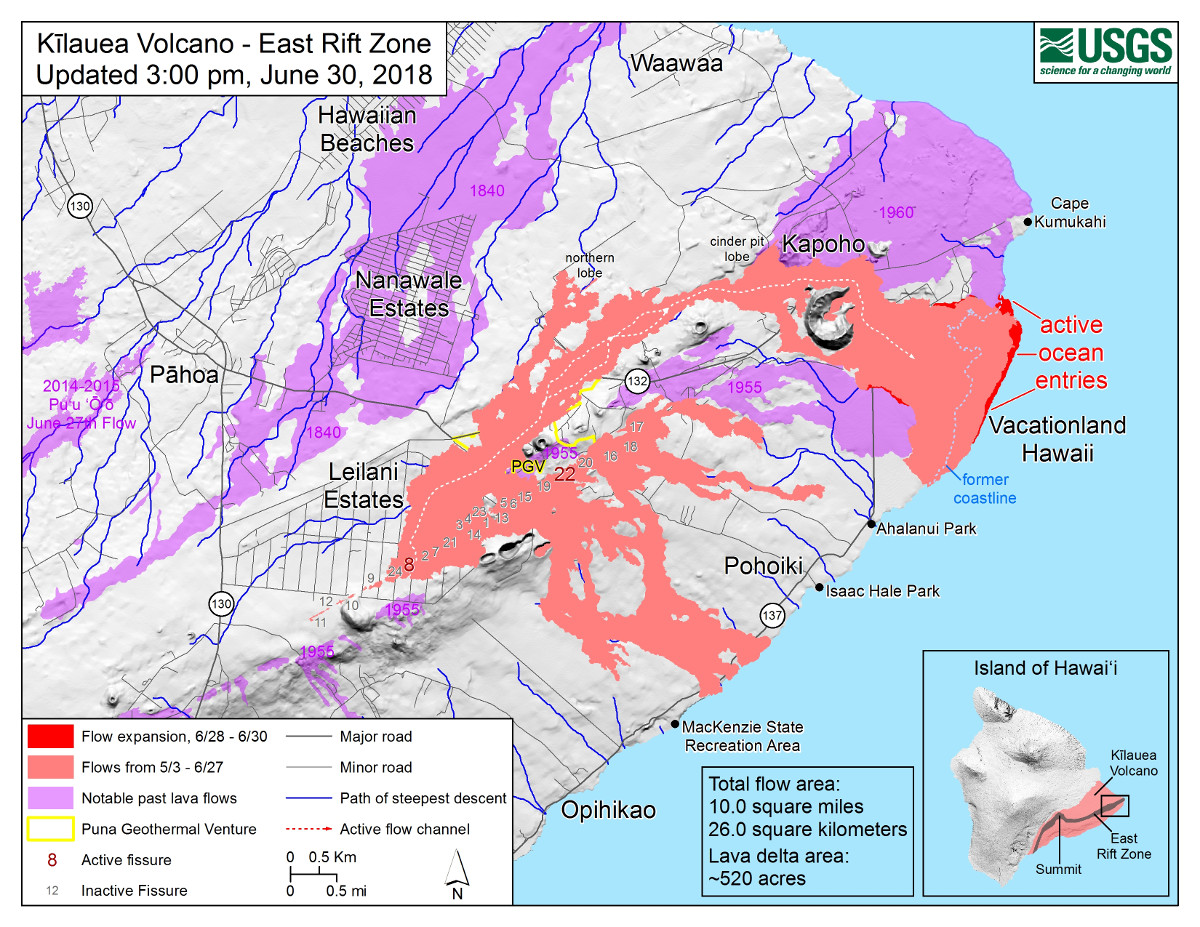 (BIVN) – Another structure was observed burning in the Kapoho Beach Lots area Saturday, as the eruption in the lower East Rift Zone of Kilauea Volcano continues with no significant change during the past 24 hours.

From the USGS Hawaiian Volcano Observatory on Saturday:

Fountains from Fissure 8 spatter cone continue to supply lava to the open channel with intermittent small, short-lived overflows. These overflows rarely extend beyond the existing flow field. No active overflows were observed during this morning’s helicopter overflight.The spatter cone is now about 55 m (180 ft) tall at its highest point, and fountains rarely rise above that point. At the coast, the northern margin of the flow field is still oozing fresh lava at several points in the area of Kapoho Beach Lots. Lava was entering the sea over a broad area this morning primarily on the northern side of the entry area. As shown by yesterday’s thermal map of the flow field, the lava channel has crusted over about 0.8 km (0.5 mi) inland of the ocean entry; lava is moving beneath the crust and into still-molten interior of earlier flows before it enters the sea in multiple oozeouts.

Fissure 22 is also active and producing a short flow, civil defense reported this evening. Video taken by Mick Kalber from a helicopter shows the active Fissure 22 below.

At the Kīlauea summit, a collapse explosion event occurred at 2:51 p.m. HST on June 30. An ash-poor plume rose about 500 ft above the ground and drifted southwest, USGS reports. The energy released by the event was equivalent to a Magnitude 5.3 earthquake.

Gas emissions from the fissure eruption and laze at the ocean entry continue to be very high, civil defense says. The National Weather Service reports light winds will cause SO2 levels to rise as gases build up in affected areas.

Disaster assistance is available island-wide to individuals and businesses in Hawaii County that have been affected by the Kilauea eruption, civil defense reminds.