HAWAII ISLAND - The ACLU of Hawai‘i Foundation is taking issue with election days plans in Puna, while non-profits are invited to apply for FEMA Public Assistance. 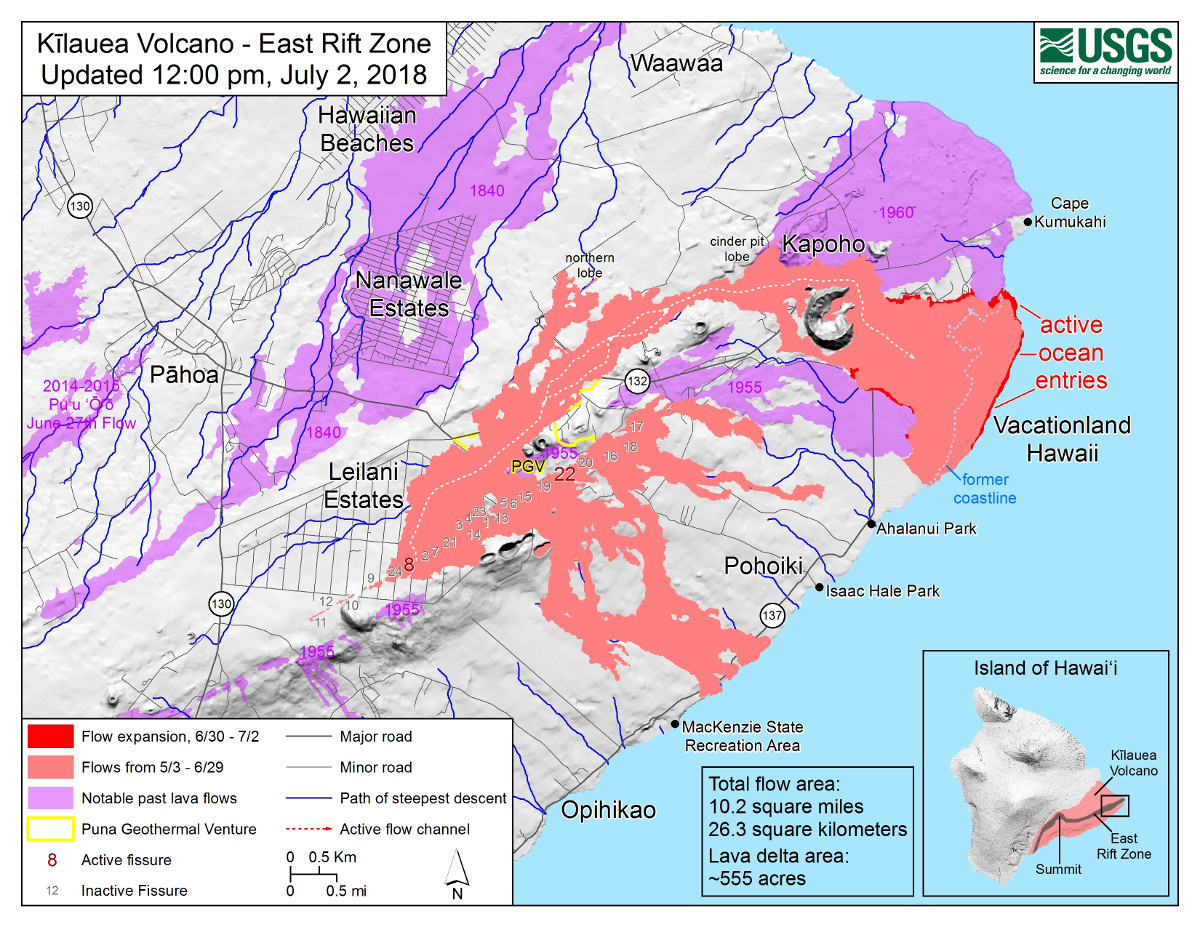 “Hawaiian Volcano Observatory reports that Fissure 8 continues to be very active and is feeding a lava channel to the ocean at Kapoho,” Hawaii County Civil Defense reported Tuesday morning. “The flow is producing a broad ocean entry along the shoreline. Fissure 22 is also active and producing a short flow. Gas emissions from the fissure eruption and laze at the ocean entry continue to be very high. The National Weather Service reports trade winds will push vog to the south and west side of the island.”

Many rivulets of lava were threatening the Kapoho Ag Lots yesterday, according to Mick Kalber, who recorded video of the activity from a helicopter on Monday. According to Kalber’s notes:

She is still advancing toward the Alahanui Hot Pond and Kua O Ka La Charter School…. and only a quarter mile away, flowing over the 1955 lava flow there… but the flow was barely moving as of this morning. An enormous ocean entry between Kapoho Bay and the former Vacationland subdivision still dominates the flow front… and a new flow has rounded Kapoho Crater and is flowing over what covered Kapoho Bay two weeks ago. That flow is apparently the result of a surge of lava that caused any number of overflows near the “braided channel” portion of the lava river between PGV and Kapoho Crater. A good deal of lava exited the channel, but very little flowed outside the apron of lava previously erupted on the river banks.

At 2:17 a.m. on July 3, a collapse explosion event occurred at Kīlauea’s summit. The energy released by the event was equivalent to a Magnitude 5.1 earthquake.

The Hawaii Department of Transportation issued this media release on Monday:

The Hawaii Department of Transportation (HDOT) is reminding the public that the speed limit on Highway 130 (Keaau-Pahoa Road) in the vicinity of the cracks at mile markers 14.4 and 14.6 has been lowered to 25 mph since May 27, 2018.

“We’re thankful for the work our crews and partners have put in to ensure continued mobility for those in the East Rift Zone,” said Hawaii Department of Transportation Director Jade Butay. “Even though the situation has stabilized enough to allow public access to Highway 130, we are reminding those choosing to travel through the area of speed and parking restrictions that we’ve put in place for their safety.”

Hawaii County announced that Highway 130 would be opening to all traffic beginning at 8 a.m. Tuesday, July 3, 2018.

Temporary “No Parking” signs have also been installed near Leilani Estates at the request of the county.

Motorists are reminded that stopping or parking on the metal plates or at other unauthorized points along Highway 130 is not advisable as HDOT and the county continue to monitor heat and gas levels in the area. Camera views showing the heat coming from the cracks beneath Highway 130 remain available through http://ops.punatraffic.org

“Even though Hawaii County is opening the road up to the public we want to remind folks that they may be traveling through areas where people have lost everything and are at continued threat,” said Hawaii District Engineer Donald Smith. “If you are not a resident and are passing through, please be mindful of this and the signs that are posted along the highway for your safety.”

HDOT’s Hawaii District, federal, state, county, and private partners continue to work on the additional alternative route from the Black Sand Subdivision to South Kaohe Homestead Road. Work on alternate evacuation routes using Chain of Craters Road and an alternate route around the cracking on Highway 130 through land owned by Sandford Service Center Inc. was completed on June 2, 2018.

From the Hawaii Emergency Management Agency:

Faith-based organizations, in addition to other community, volunteer, and non-profit organizations located on the island of Hawai’i with expenses or damage related to the ongoing Kilauea lava event, may be eligible for the Federal Emergency Management Agency’s (FEMA) Public Assistance program as part of a Presidential Major Disaster Declaration.

As part of its mission, FEMA provides grants to state, local, tribal, and territorial governments and certain private nonprofits through its Public Assistance program. Community, volunteer, faith-based, and private nonprofit organizations conducting critical and essential services of a governmental nature that sustained disaster damage may be able to receive FEMA Public Assistance (PA) grants to repair or replace their facilities so they can continue offering critical and essential community services.

According to HI-EMA, the types of organizations that provide critical services that may qualify for FEMA PA grants include:

Types of non-critical, essential services that may be eligible for PA grants include:

Only organizations with state or IRS tax exempt status may be considered. For more information about eligible essential and critical service providers, go online to FEMA.gov and reference the Public Assistance Program and Policy Guide.

Organizations that provide services of a non-critical, essential governmental nature must first apply for a low-interest disaster loan from the U.S. Small Business Administration (SBA) before being considered for a PA grant. Public Assistance grants may be able to provide assistance to organizations that provide non-critical, essential governmental services for repair or replacement costs that SBA loans do not cover.

Interested private non-profit organizations should email OahuLava1@hi-ema.net or call 808-733-4300 extension 801 for information or to receive a Request for Public Assistance.

Deadline for all applications is July 7.

Under the PA Program, the Federal Emergency Management Agency (FEMA) awards grants to assist State and local governments and eligible Private Nonprofit (PNP) entities with their recovery efforts. The declaration currently provides funds for eligible debris removal, emergency protective measures, and permanent work. The federal share of the funding is 75 percent of the eligible costs.

“Hawaii Island residents and business owners continue to demonstrate incredible resilience in the face of a major ongoing disaster,” Senator Hirono said. “The approval of Individual Assistance has unlocked new federal resources, but the response to and recovery from this disaster requires a long-term, sustained commitment from every level of government. I will continue to advocate for these communities in Washington, D.C. to ensure they get the assistance they need at this difficult time.” 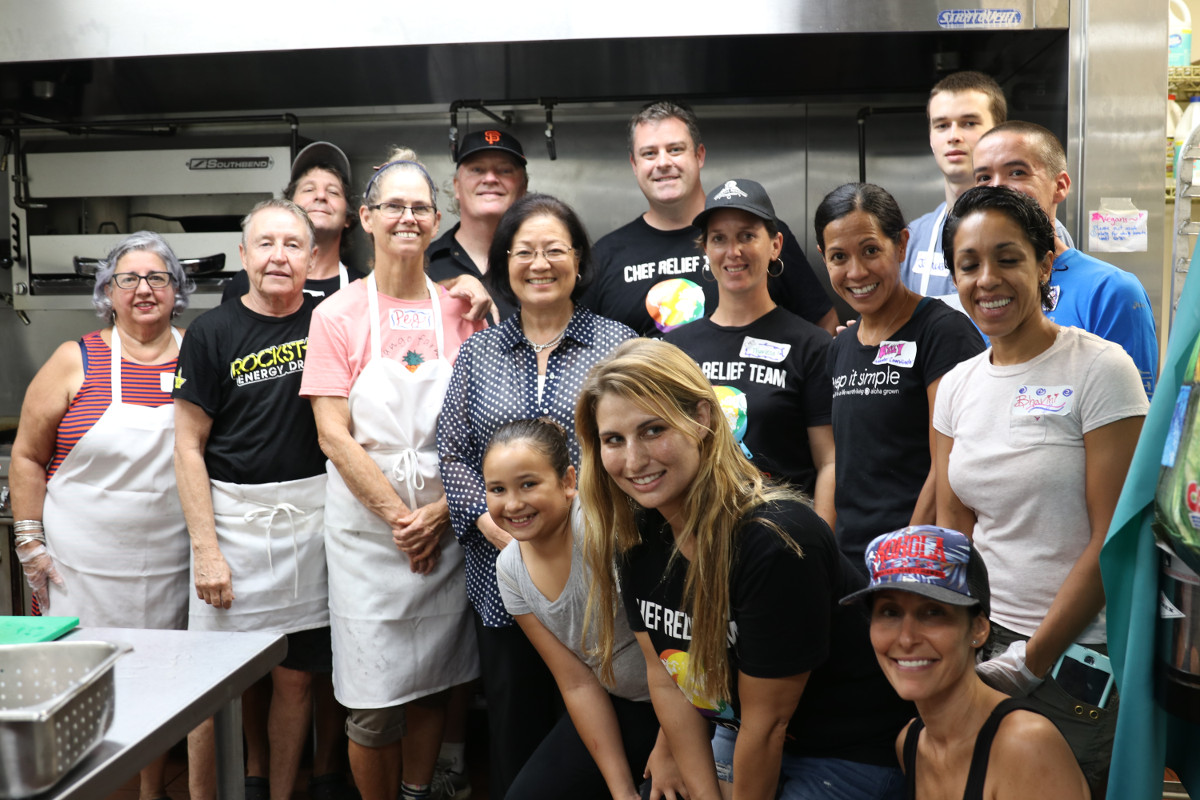 The ACLU is demanding the State Office of Elections allow Pahoa voters to register and vote in person on election day. A media release details the demand letter:

The ACLU of Hawai‘i Foundation (ACLU of Hawai’i) issued a demand letter on Friday to the Hawai‘i Office of Elections. The letter, written by ACLU of Hawai’i Legal Director, Mateo Caballero, vows swift legal action if the “severe burden on the right to vote” imposed by the Office of Elections’ current voting plans for areas of Hawai‘i Island affected by the eruption of Kilauea Volcano are not fixed. As noted in the ACLU of Hawai’i demand letter, a “refusal to allow in-person registration and voting on election day would not only be arbitrary and unnecessary but would also not survive constitutional muster.”

Executive Director Joshua Wisch said: “Hundreds of families in Leilani Estates, Pahoa, Kapoho and surrounding areas have lost their homes. But the Office of Elections is only planning to let these people vote by absentee ballot – ballots that will likely be sent to the same homes that have either been destroyed by lava or are uninhabitable due to volcanic activity. The Office of Elections must provide a polling place for these folks to register and vote in person on election day, as provided by law.”

In 2014, Hurricane Iselle struck on the eve of the primary, impacting the people of Pahoa. In its aftermath, voters had to contend with shifting direction from the Office of Elections about where and how to vote. These same precincts saw some of the lowest turnout ever, even as the ACLU was in touch with residents who wanted to vote but did not know how. The ACLU of Hawai‘i asked the Hawai‘i Supreme Court to hold primary election results so that these districts could property vote, but the Supreme Court denied this request without reaching the merits of the complaint. Later efforts to get the legislature to require better disaster response from the Office of Elections to protect the vote failed.

Legal Director Mateo Caballero said: “The right to vote is fundamental. We ask anyone who thinks their voting rights may be affected to contact our office and let us know.”

The ACLU of Hawai‘i has given the Office of Elections until July 6th to respond to the demand letter.

There will be a community meeting this evening at 5 p.m. at the Pahoa High School cafeteria.