(BIVN) – Hawaii County Civil Defense officials and scientists with the USGS Hawaiian Volcano Observatory met with the Volcano community on Thursday evening, following the release of a new document that considers the possibility of future, destructive activity at the summit of Kilauea Volcano.

The document summarizes the summit activity from late April through the present, as the evacuation of the magma reservoir has led to dramatic subsidence at the summit, and inward slumping of the rim and walls of Halemaʻumaʻu. Hawaii Volcanoes National Park remains closed, and the surrounding community has been continually jolted by hundreds of earthquakes.

Officials met with Volcano-area residents at the Cooper Center in order to explain the possible outcomes. The meeting was recorded by Na Leo TV and can be watched on demand. Scenarios were detailed in the document:

Ground subsidence will continue for as long as magma is withdrawn from the summit reservoir(s) at a rate exceeding the rate of magma supply, but the rate, style, and geographical extent of the subsidence – along with associated hazards – may vary. The scenarios below are considered under the condition of continued net magma withdrawal. For a discussion on how long this might occur, see the later section “Time frames of activity”.

#1: MOST LIKELY OUTCOME FOR THE IMMEDIATE FUTURE (UP TO TWO MONTHS)

The most likely activity for the immediate future is continued subsidence of Kīlauea Caldera, episodic slumping into a widening Halema`uma`u crater, felt earthquakes (some large enough to be damaging), and small to intermediate ash plumes that remain below 10,000 feet above sea level. As the reservoir deflates, cracking and slumping is gradually engulfing a broader extent of Kīlauea Caldera (as observed in high rates of ground deformation and propagating cracks around Halema`uma`u ); this process will likely continue to enlarge Halema`uma`u and may involve larger slump blocks than previously. This activity is impressive in scale — and may ultimately involve much or even all of the current Kīlauea Caldera — but it need not necessarily involve new or more hazardous explosive activity.

Hazardous explosive activity cannot be ruled out, however. It is possible that a large section of the Halema`uma`u wall could abruptly collapse into the crater. Because a broad region E and NE of Halema`uma`u is currently deforming, it is difficult to predict how large such a collapse might be or its impact on the explosion hazard. Most likely, such an event would generate only strong seismic shaking and a robust ash plume.

#2: LESS LIKELY OUTCOMES FOR THE IMMEDIATE FUTURE (UP TO TWO MONTHS)

Several mechanisms could change the nature of activity and associated hazards. These are considered less likely but cannot be ruled out. The likelihood of some of these processes may increase if the net rate of magma outflux from the summit increases.

Below we consider the possibility of 1) more hazardous explosions occurring during ongoing subsidence and enlargement of Halema`uma`u, and 2) sudden collapse of the larger caldera system. This list may not include all possible future outcomes and hazards.

1. Larger explosion during ongoing subsidence in and around Halema`uma`u. Activity could become more hazardous over short time scales. This could be triggered in one of several ways, including a) rapid pressure change or other perturbation of the reservoir, b) opening of new pathways between the reservoir and the surface, or c) interaction of magma with groundwater. Rapid pressure change could be caused by a large, sudden landslide from the crater’s steep, faulted rim; alternatively, sudden larger-scale collapse of rock into the reservoir could perturb reservoir pressure above levels seen during previous CE events. New pathways could be formed by explosive ejection of rubble in the vent or downward propagation of cracks. Groundwater could enter the magmatic system at sufficient rates to produce steam-driven explosive eruptions. Some of these mechanisms could be preceded by detectable changes in monitoring data, but others could happen with no warning. If larger explosions do occur their style and magnitude cannot be predicted; it is possible that they could produce more ballistics and ash, and possibly also pyroclastic surges (defined below).

2. Sudden collapse of the broader caldera system and catastrophic failure of high caldera walls. Even less likely but more hazardous scenarios exist. Large explosive eruptions have occurred in Kīlauea’s past after caldera formation or during the last stage of its formation. It is possible that these eruptions were triggered by rapid collapse of broad regions of the caldera along caldera-bounding faults due to withdrawal of large quantities of magma from the summit storage system. Based on our understanding of the magmatic system, this activity should be preceded by significant changes in earthquake activity and ground deformation. At this time, satellite radar data show that high rates of deformation are concentrated in a well-defined area bordered by caldera-boundary faults on the west and south and on the east and northeast along a line roughly 600-900 meters (yards) from the caldera walls. These data do not suggest that extensive deformation is occurring outside of the caldera. Additionally, we currently see no evidence that major caldera-bounding faults are moving, although some cracks have been detected that probably result from ground shaking. Additional hazards associated with rapid, broad-scale caldera collapse could include high lava fountains and larger and more dangerous explosions producing pyroclastic surges (defined below). However, we emphasize that current data do not suggest that a larger, sudden collapse scenario is
likely at present.

The USGS says residents should continue to be prepared for strong seismic shaking and, in the vicinity of the caldera, ground cracks. Hawaii County Civil Defense urged residents to prepare now and make sure they have a plan should things get worse.

Scientists said they believe there is a very low possibility of pyroclastic surges occurring, but they explained the deadly volcanic phenomena in the document nonetheless:

Pyroclastic surges and density currents are highly destructive, generally fast-moving clouds of volcanic gases and fragments of magma and older rocks. They are generally hot and form when eruption columns become unstable and collapse back around the vent. Surges typically travel tens of meters per second, but certain types can move as rapidly as 100 – 300 meters per second (200 – 700 mph). Surges usually extend radially from the vent in all directions, but can be influenced by topography, thickening in valleys and thinning over topographic highs. Due to their great heat and high speed, pyroclastic surges are among the most dangerous and destructive of volcanic hazards. There are very few survivors among those caught in the path of a hot surge, and property damage is severe.

In the past, surges have been produced at Kīlauea by sustained eruption columns. For example, pyroclastic surges were produced at Kīlauea between the middle 1500s and A.D. 1790. Surges in and just before 1790 extended 3 – 5 km (1.8 – 3 miles) west and south of the caldera and form the basis for a surgehazard map shown in Figure 5. The direction that surges may travel is difficult to predict, and the entire summit area of Kīlauea out to roughly 5 km (3 miles) from center of the caldera is susceptible to surges if they were to occur (Figure 5). At present, Kīlauea is not producing any sustained eruption columns even during the largest CE events. 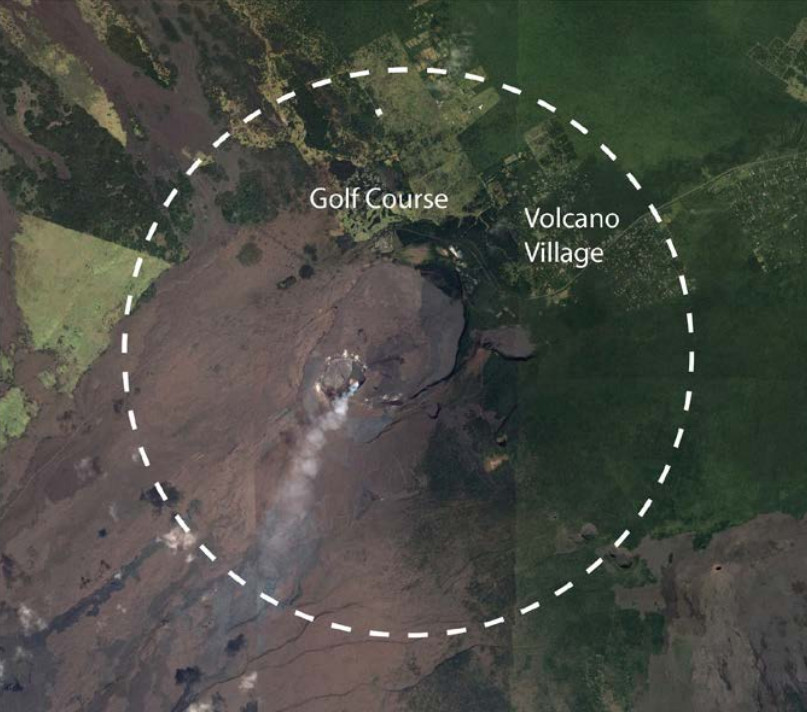 Figure 5: The dashed white circle indicates the approximate boundary of the pyroclastic surge zone at the summit of Kīlauea, assuming for simplicity a source near the center of the caldera. The white line shows only the maximum reasonable distance a surge would travel from the caldera as inferred from past eruptions; it does not indicate that such behavior is likely at this time (it is not), nor that surges would fill the entire area within the circle (surge deposits would likely travel within narrow regions). Background imagery from Google Earth. (USGS)

In the document, scientists said it is most likely that the current activity – at the summit and along the lower East Rift Zone – “will continue for weeks to months, and it is possible although less likely that it will continue longer.”