HAWAII ISLAND - Lava on the southern side of the Fissure 8 lava ocean entry is a couple hundred yards from the warm ponds and Kua O Ka Lā Public Charter School. 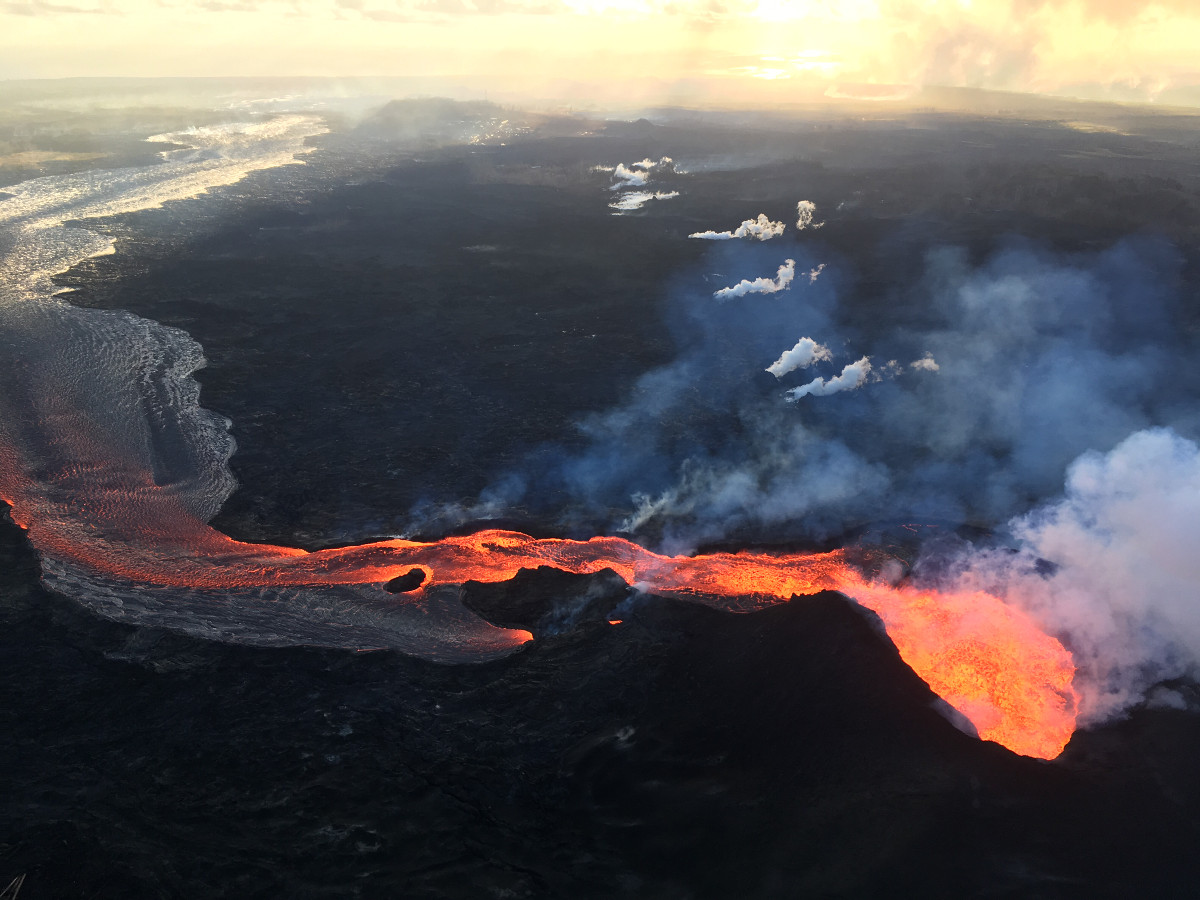 The advance of the lava on the south-side of the lava channel near Kapoho was not mentioned by Hawaii County Civil Defense or USGS on Sunday, however social media reports and, later, video from Mick Kalber aboard a Paradise Helicopter flight revealed the proximity of the lava to Ahalanui Park.

“Pele has crossed the 1955 lava flow between the ocean and Highway 137 and this morning was about 3-400 yards from the hot pond/school,” Kalber wrote today. “Reports from Paradise helicopters’ pilot Sean Regehr say the flow is now within 200 [yards].”

According to the USGS Hawaiian Volcano Observatory this morning at 11:18 a.m. HST:

As shown by the July 06 thermal map of the flow field, the main lava channel no longer directly enters the ocean—the open channel flow ends about 2 km (1.2 mi) inland of the coast. Lava continues to enter the ocean, however, from multiple points along the entire ocean entry area, primarily along the northern section. In addition, multiple ooze-outs fed flows on the north and the southwest edge of the main ‘a’ā flow field but neither had lava actively entering the ocean. 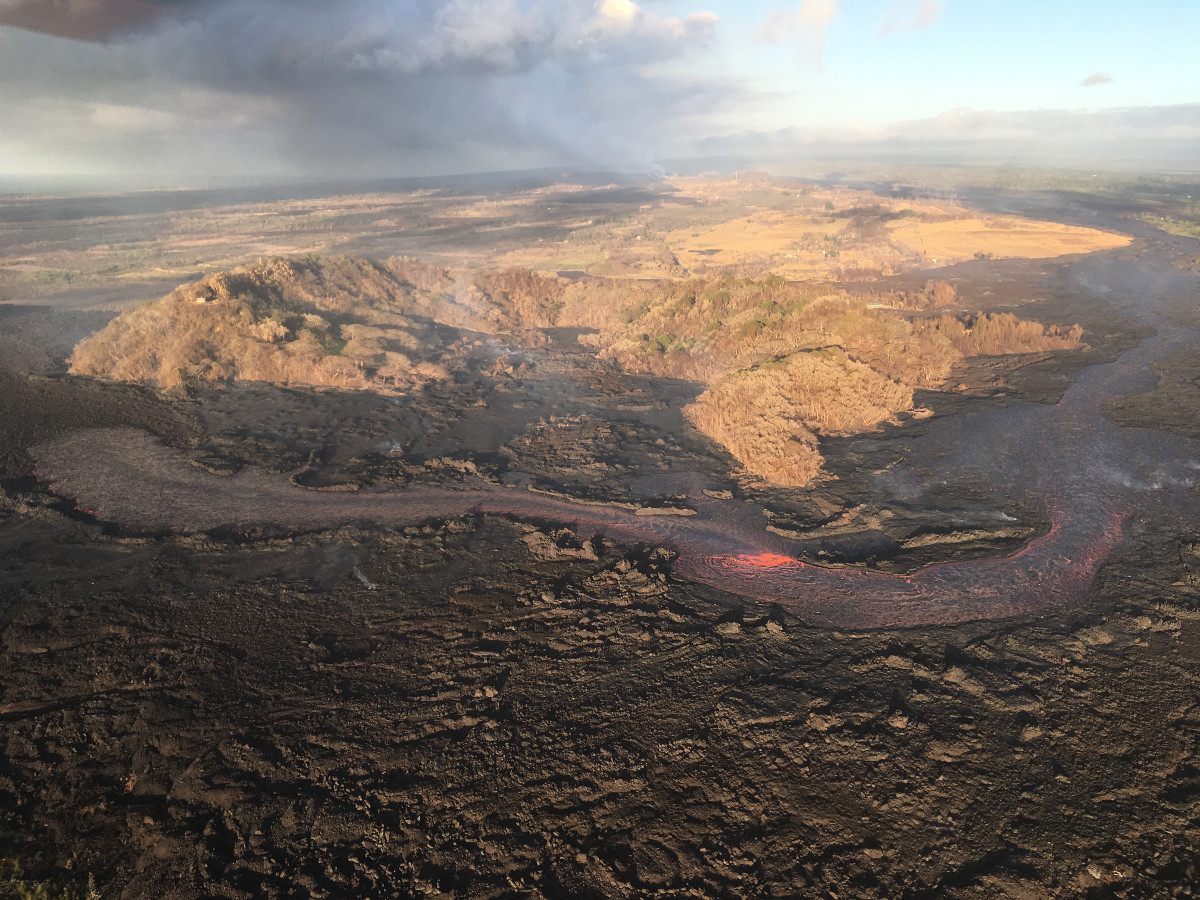 USGS: View of the partially filled Kapoho Crater (center) and the open lava channel where it makes a 90-degree turn around the crater. The open channel no longer directly enters the ocean. Lava flows freely through the channel only to the southern edge of Kapoho Crater (left side of image). Clearly, lava moves into and through the molten core of the thick ‘a‘ā flow across a broad area from both the sides and end of the channel.

“Kapoho Beach Lots and Four Corners area are closed to any access,” Hawaii County Civil Defense reported Sunday. “Be aware that spill overs of the channel and other breakouts are possible on the active flow field, do not access the active flow field due to extreme hazard.” 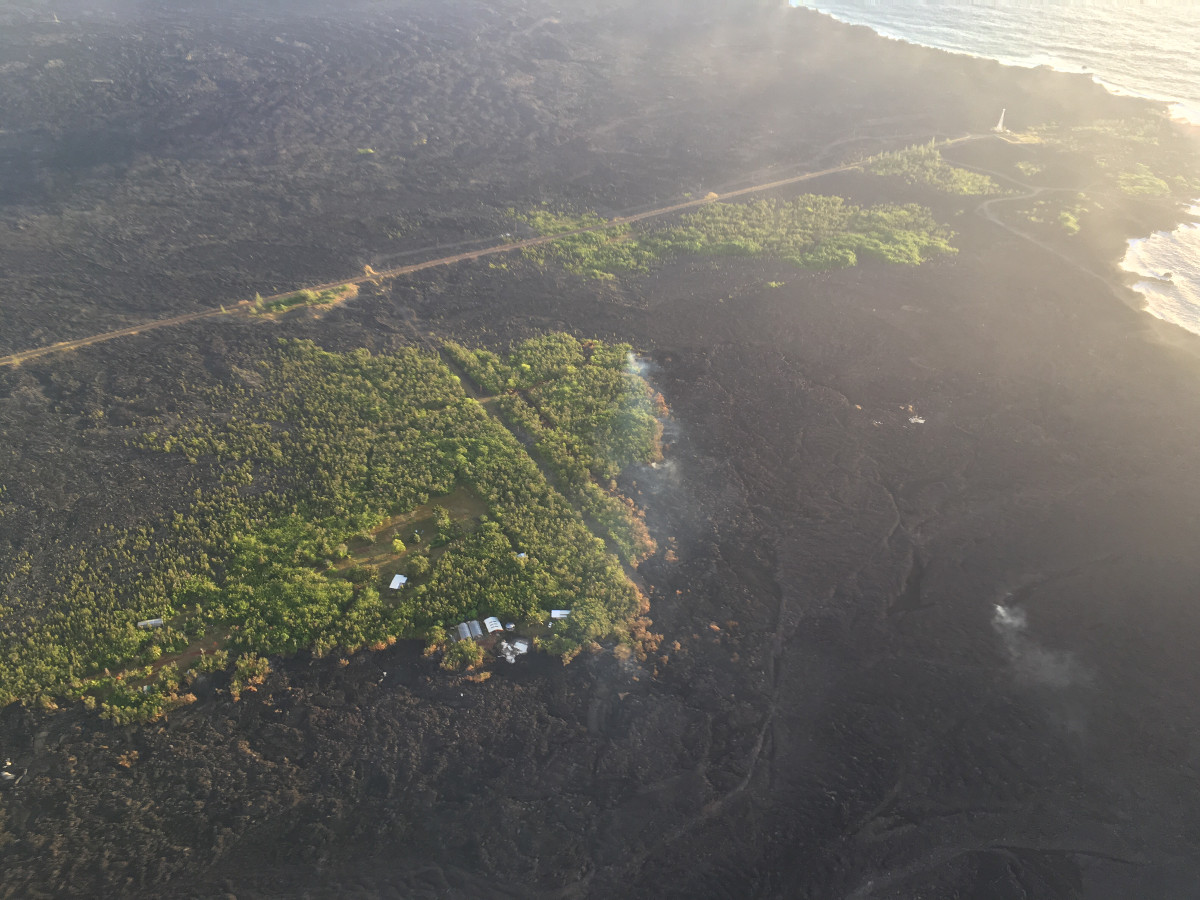 USGS: Lava still oozes from the northern edge of the ‘a‘ā flow near the lighthouse at Cape Kumukahi (upper right). Smoke from burning vegetation marks location of lava oozeouts. View is toward the northeast.

The USGS Hawaiian Volcano Observatory made a note on their website today that suggested a connection between the collapse explosion events at the summit and the lava output from Fissure 8. USGS wrote:

Geologists noted small lava-level fluctuations in the open channel overnight, which indicates intermittent variations in lava discharge from fissure 8. An increase in lava levels was noted about 1.5 hours after the collapse-explosion event at the volcano’s summit at 02:55 a.m. HST.

“Evidence of a couple of recent, short-lived channel overflows were observed early this morning,” scientists noted, “but they had not reached the edge of the flow field.”