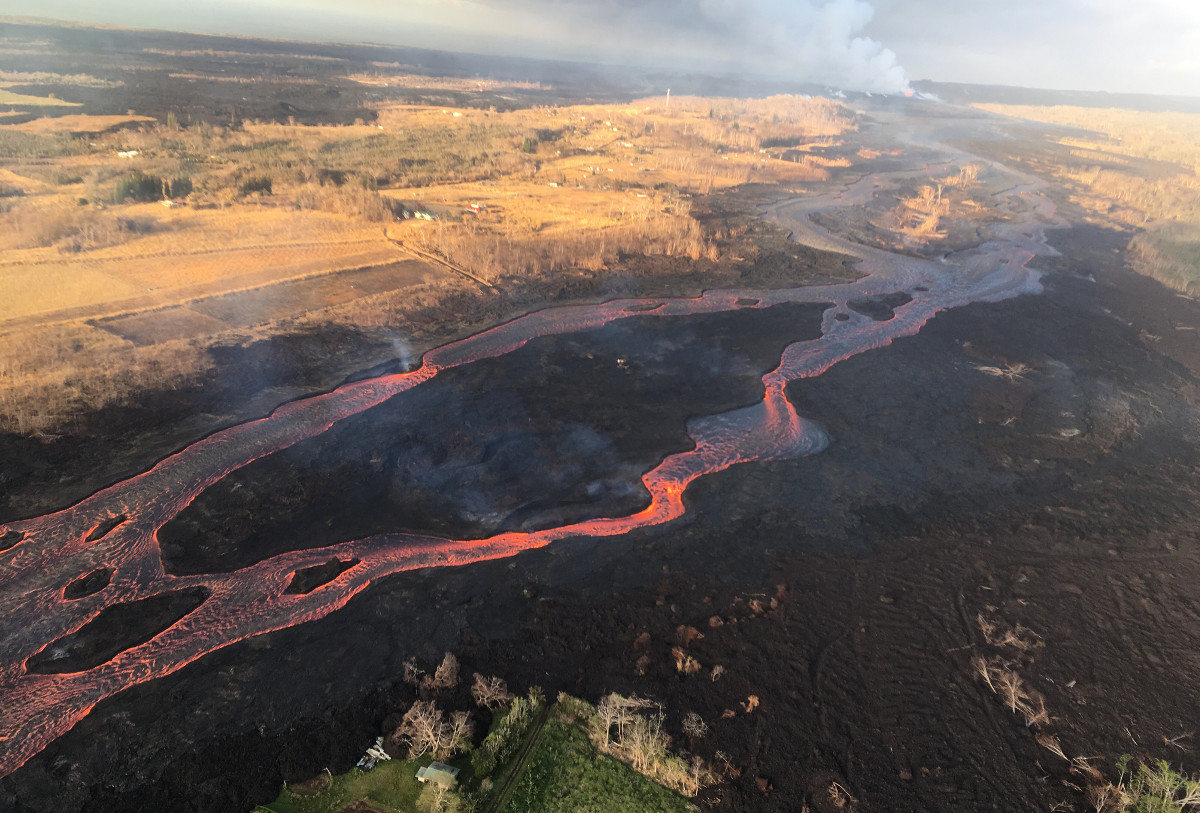 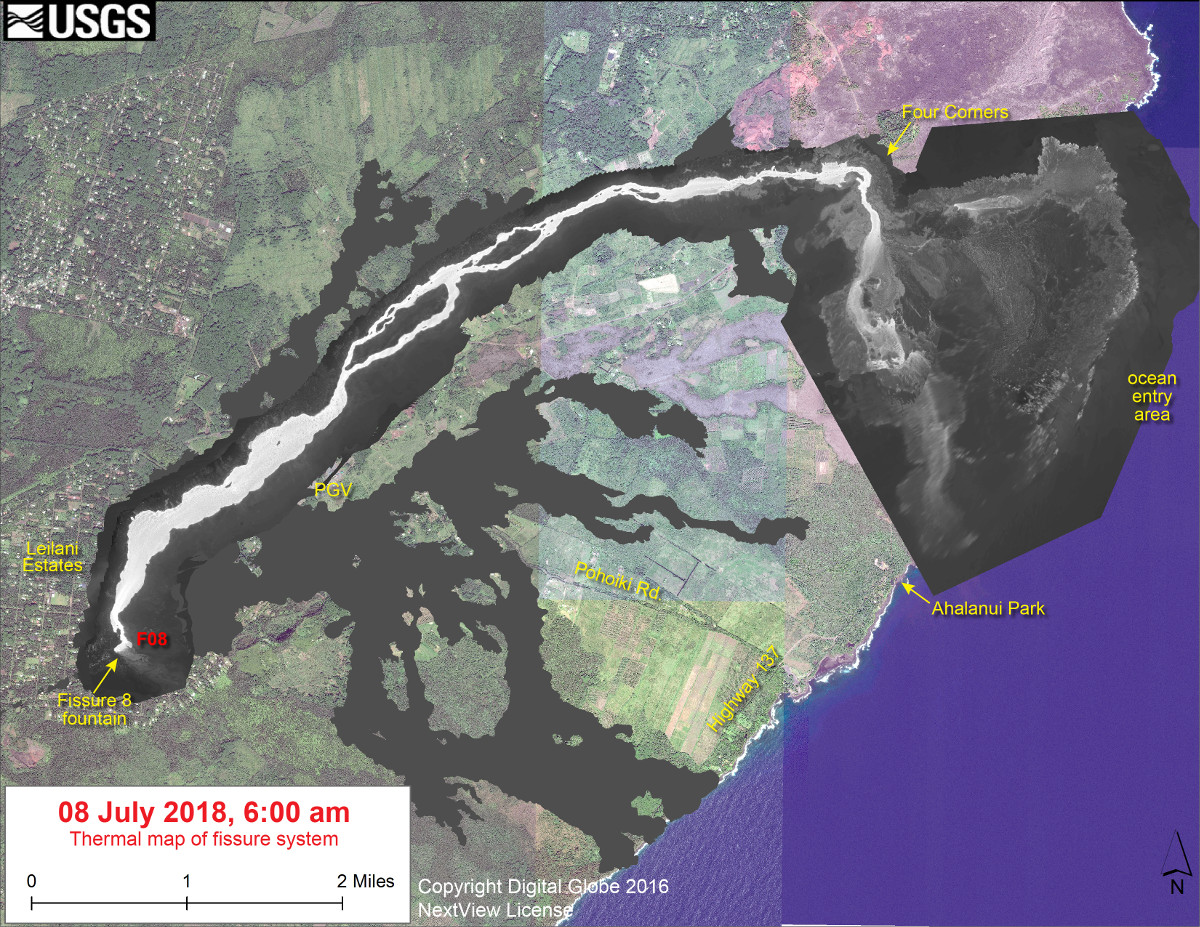 (USGS) This thermal map shows the fissure system and lava flows as of 6 am on Sunday, July 8. The fountain at Fissure 8 remains active, with the lava flow entering the ocean at Kapoho. The black and white area is the extent of the thermal map. Temperature in the thermal image is displayed as gray-scale values, with the brightest pixels indicating the hottest areas. The thermal map was constructed by stitching many overlapping oblique thermal images collected by a handheld thermal camera during a helicopter overflight of the flow field. The base is a copyrighted color satellite image (used with permission) provided by Digital Globe.


(BIVN) – Fissure 8 continues to be very active and is feeding a lava channel to the ocean at Kapoho, officials reported Monday morning. As it has over recent weeks, the flow is producing a broad ocean entry along the shoreline. 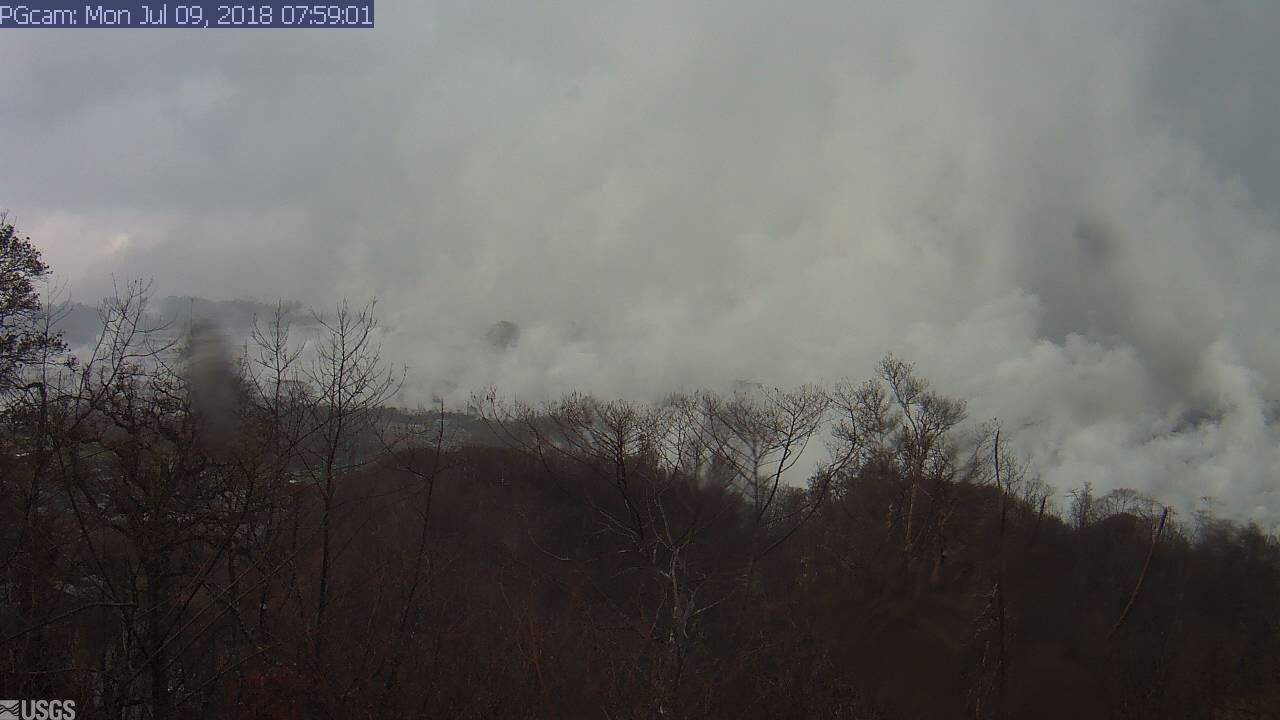 (USGS) This image is from a temporary research camera positioned near Kapoho looking southwest.

Active lava continues to expand into Kapoho Beach Lots and north of Four Corners intersection, Hawaii County Civil Defense says. “Kapoho Beach Lots and Four Corners area are closed to any access,” officials repeated in a morning alert message. “Be aware that spill overs of the channel and other breakouts are possible on the active flow field, do not access the active flow field due to extreme hazard.”

Yesterday, the expansion of the lava flow on the south side of the channel near the ocean entry prompted concerns for Ahalanui County Beach Park, home of the popular warm ponds, and the Kua O Ka Lā Public Charter School. Video recorded from helicopter by Mick Kalber showed the proximity of the lava to the park and school.

UPDATE: The U.S. Geological Survey provided an update on the south-side lava activity on Monday, saying the lava is about 500 yards from Ahalanui Park. “As of this morning’s (~6AM HST) overflight, the Warm Pond area [is] roughly a half kilometer from nearest active flow margin,” as per a visual estimate, reported Paul Laustsen of the USGS. “Matt Patrick’s report from the evening of July 8 said that the flow had advanced approximately 200 meters in a day and was approximately 600 m from the flow, so it looks like it’s advancing at about 100 m every 12 hours or so.”

Fountains from Fissure 8 spatter cone continue to supply lava to the open channel with only small, short-lived overflows. The spatter cone remains about 55 m (180 ft) tall at its highest point with low fountaining contained within the cone walls. As shown by the July 08 thermal map of the flow field, the main lava channel has reorganized and is nearly continuous to the ocean on the south side of the flow, expanding the south margin by several hundred meters. Lava continues to enter the ocean along a 4 km (2.5 miles) long line of small entry points.

At 9:20 a.m. HST on July 9, USGS reports a collapse/explosion occurred beneath Kilauea caldera with energy equivalent to a magnitude-5.3 earthquake.