PUNA, Hawaii - Yesterday, the USGS reported the boat ramp at Pohoiki is about 0.58 miles farther south of the flow margin. 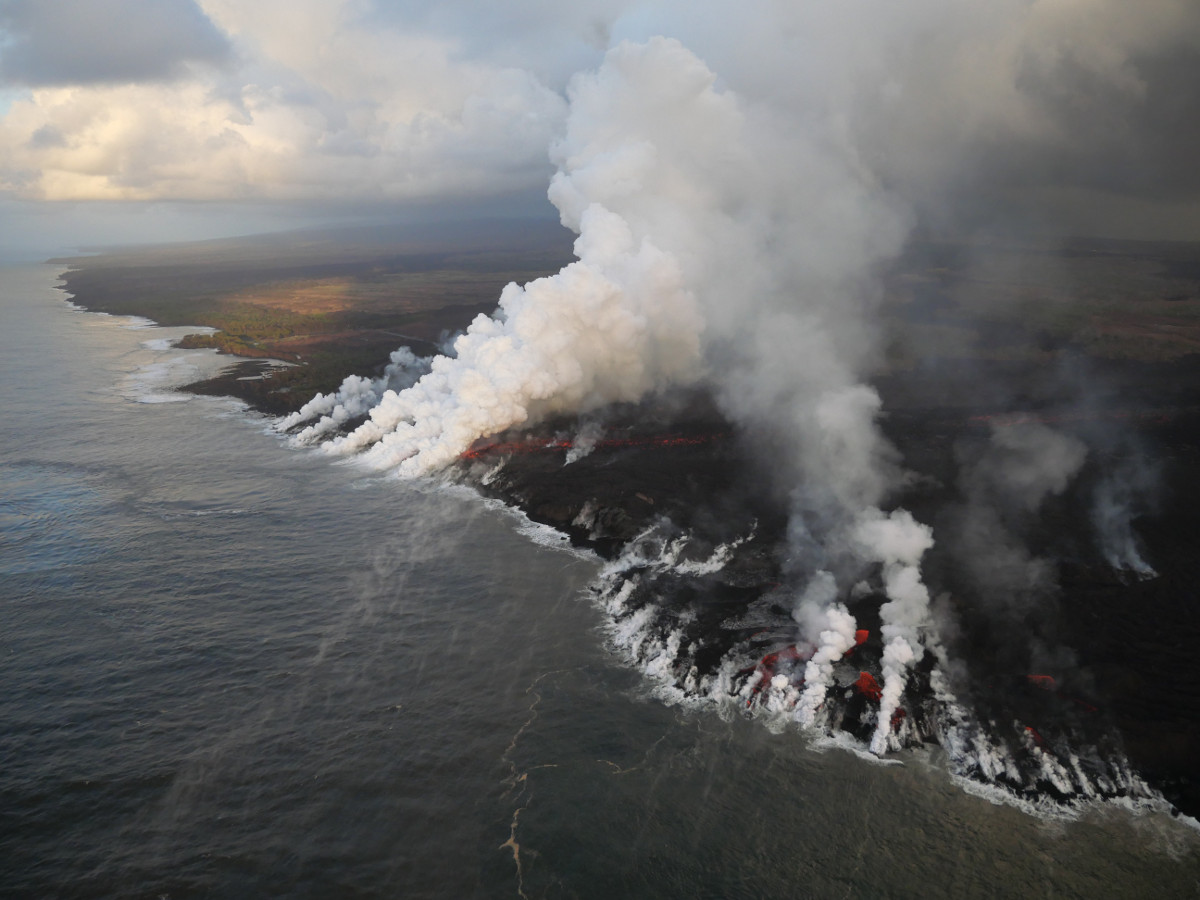 (USGS) White laze plumes mark locations where lava enters the ocean over a broad area. An open lava channel flows into the ocean at the southern-most plume (middle) near the southern flow margin.


(BIVN) – Active lava is entering the ocean about a half mile to the north of Pohoiki, and a morning collapse explosion event at the summit of Kīlauea Volcano is expected to send another surge of lava through the Fissure 8 lava channel down on the lower East Rift Zone.

At 3:26 a.m. HST July 15, a collapse explosion event occurred at Kīlauea’s summit, releasing energy equivalent to a Magnitude 5.2 earthquake, the USGS Hawaiian Volcano Observatory reported. Recent collapse explosions have correlated with a higher output from Fissure 8, usually resulting in spillovers somewhere along the lava channel a few hours after the summit event.

UPDATE: Lava was observed later this morning spilling eastward from the Fissure 8 vent to form a slowly advancing flow atop earlier lava flows (photo below). This flow stalled within hours, USGS reported. 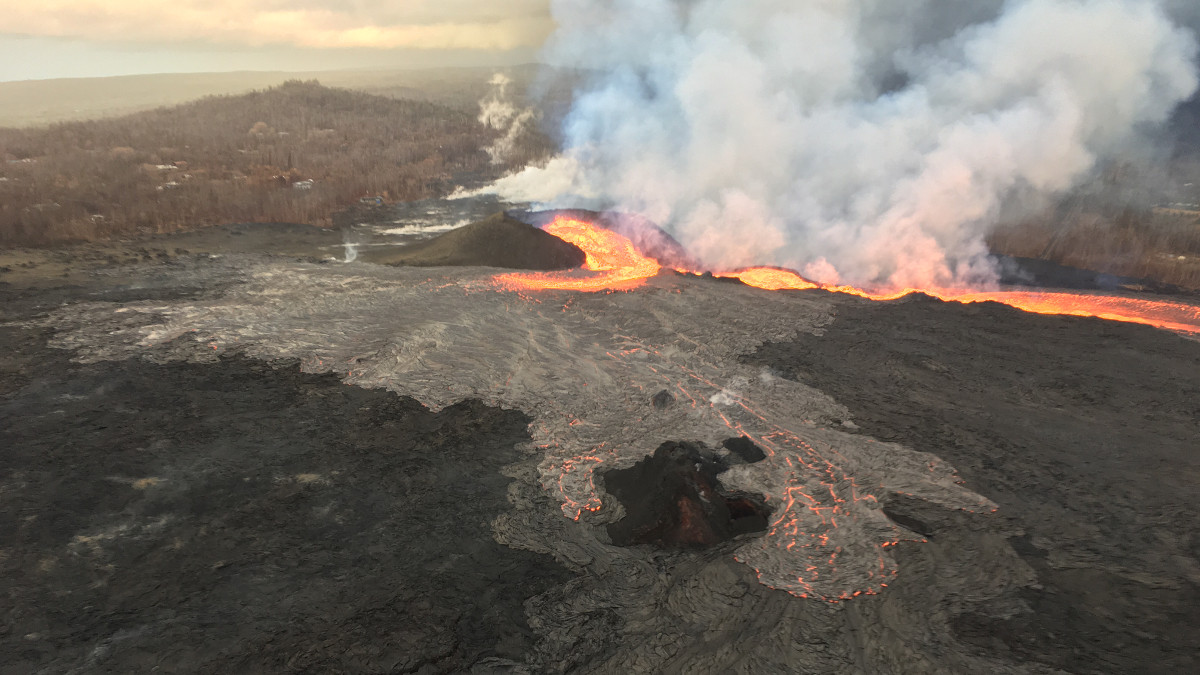 (USGS) View of fissure 8 looking uprift toward the west. The open lava channel in upper right leads to the ocean; when the photo was taken this early morning, nearly all of the lava erupting from fissure 8 was in the channel, but some was spilling over to the east.

According to Ikaika Marzo, who was operating a lava tour boat on the water near the ocean entry this morning, Pohoiki still stands. Yesterday, the USGS Hawaiian Volcano Observatory reported the boat ramp at Pohoiki was about 940 m, or 0.58 miles, farther south of the flow margin.

UPDATE: On Sunday morning, USGS reported the “southern boundary did not change location appreciably in the past day, remaining about 900 m (0.56 mi) from the boat ramp at Isaac Hale Park.” 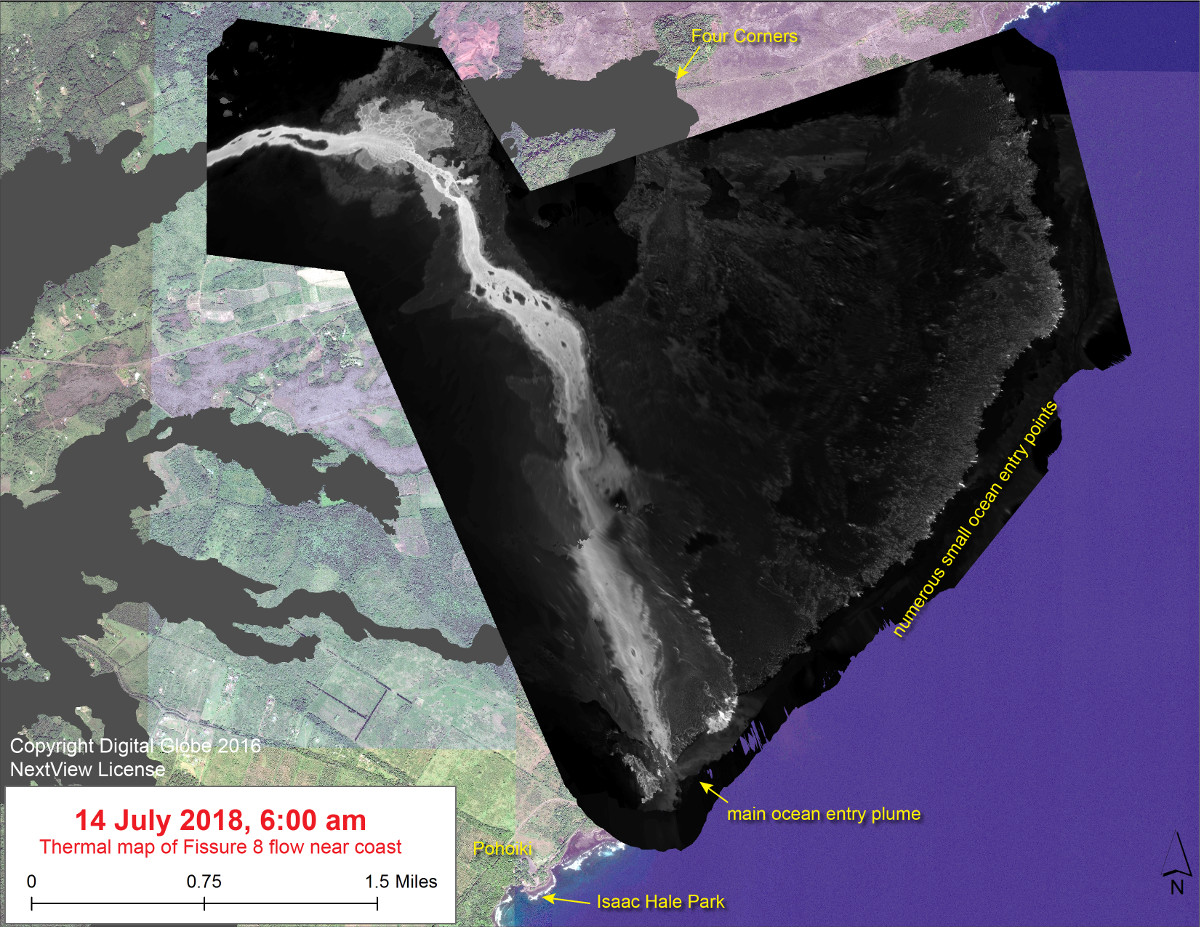 (USGS) This thermal map shows the Fissure 8 flow as of 6 am on Saturday, July 14. Only the lower portion of the flow is shown – the upper portion was not imaged today due to weather. The fountain at Fissure 8 remains active, with the lava flow entering the ocean at numerous points in Kapoho. The channel overflow from July 9-10 created a new lobe that has reached the ocean at Ahalanui Park, creating a robust ocean entry plume. The black and white area is the extent of the thermal map. Temperature in the thermal image is displayed as gray-scale values, with the brightest pixels indicating the hottest areas. The thermal map was constructed by stitching many overlapping oblique thermal images collected by a handheld thermal camera during a helicopter overflight of the flow field. The base is a copyrighted color satellite image (used with permission) provided by Digital Globe.

Heavy rain and thunderstorms are possible in Kona and the Puna District through this evening, Hawaii County Civil Defense says.

The Puna district spent much of Saturday under a Flood Advisory. “Windward showers were active last night with the heaviest showers developing near Pahoa caused by a convective cloud plume enhanced by lava flowing into the ocean,” the National Weather Service reported ear;y Sunday morning. “Doppler radar precipitation estimates show over 6 inches of rainfall for the Pahoa area over an 8 hour period. Minor flooding and water ponding was reported by local officials in the area.” 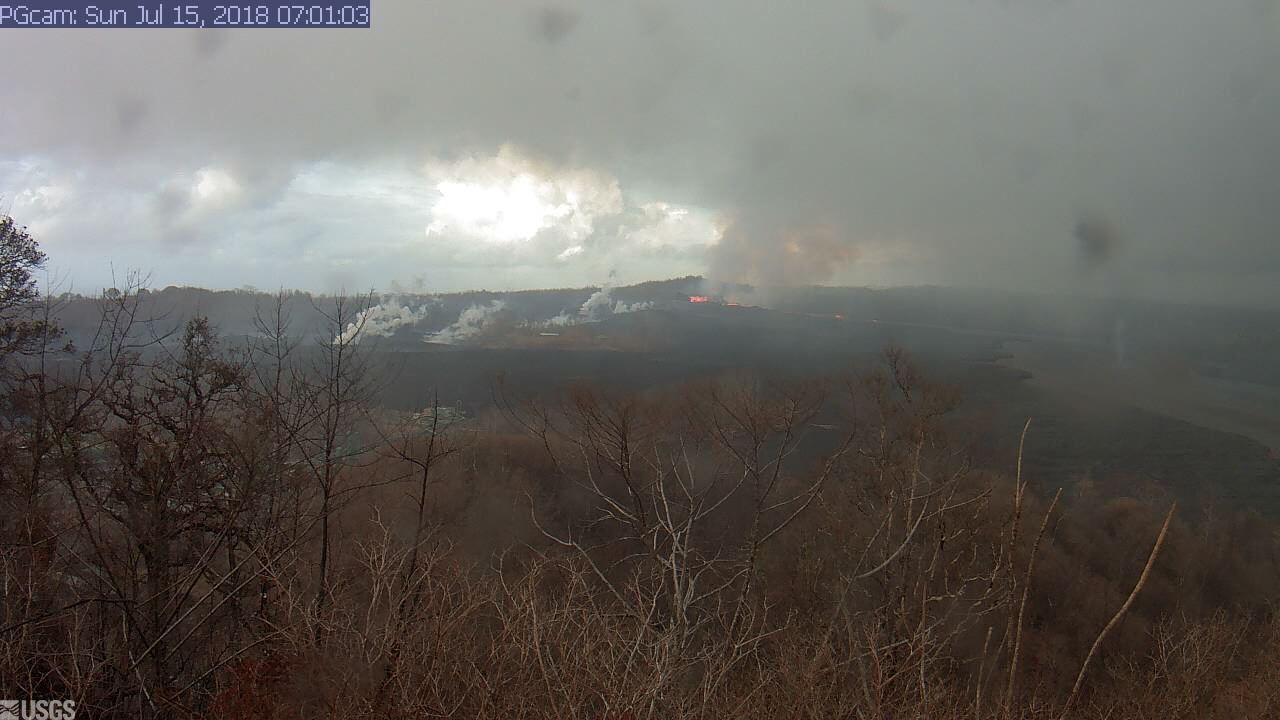