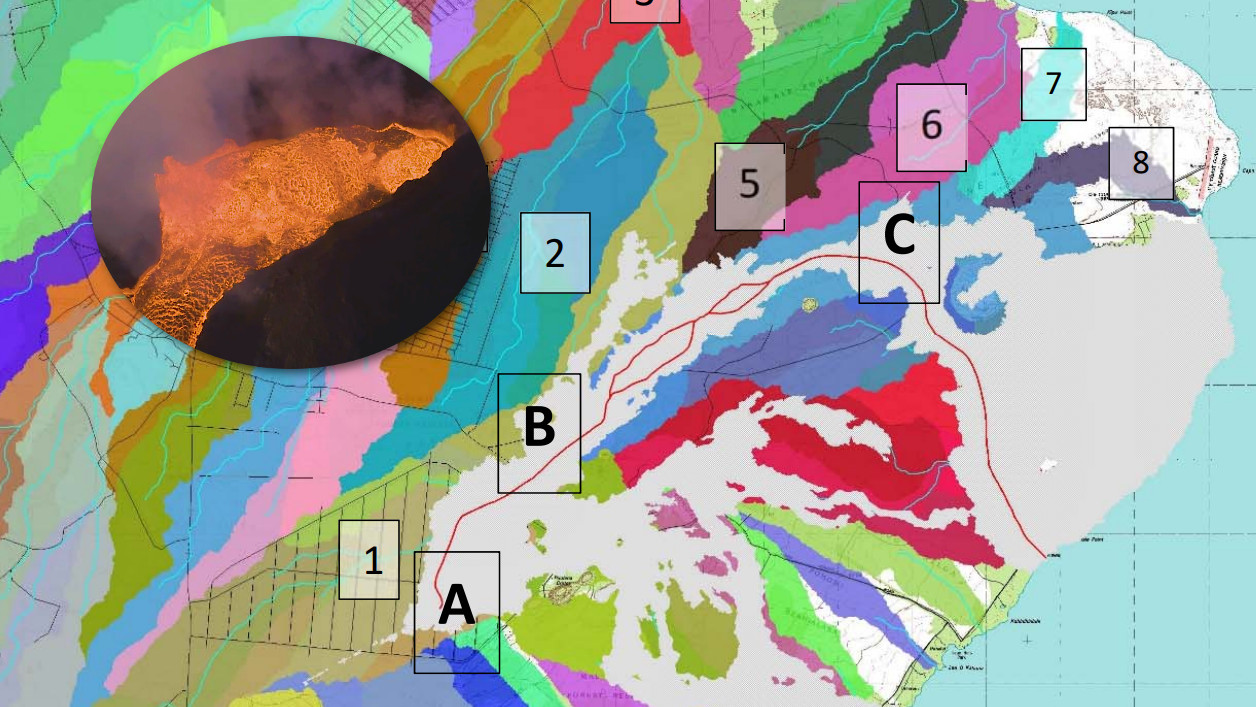 PUNA, Hawaii - In a new document, the USGS Hawaiian Volcano Observatory's preliminary analysis shows it is likely that the lower East Rift Zone eruption may continue for months to years.

(BIVN) – A new document posted to the USGS Hawaiian Volcano Observatory website provides an analysis of the ongoing eruption on the lower East Rift Zone, with a focus on the Fissure 8 vent, channel, and ocean entry. It also “describes a credible set of future scenarios for fissure 8 and discusses uncertainties.”

The document is meant as a guide for managing hazards and risks in Kīlauea’s East Rift Zone, the scientists say. According to the written report:

The volume of lava erupted during the current activity exceeds that of many past eruptions. Given this volume and the sustained withdrawal of magma from the summit reservoir without appreciable deformation in the lower East Rift Zone, it is most likely that the LERZ eruption may continue for months to years. While additional fissures may form either uprift or downrift of the current activity, the continued focus of activity within the current fissure system after 10 weeks of activity (as of July 15, 2018) makes this scenario increasingly unlikely.

The main hazard, scientists warn, “is failure of the cone or channel walls or blockage of the channel where it divides in narrower braids. Either could divert most, if not all, of the lava to a new course depending on where the breach occurs.” 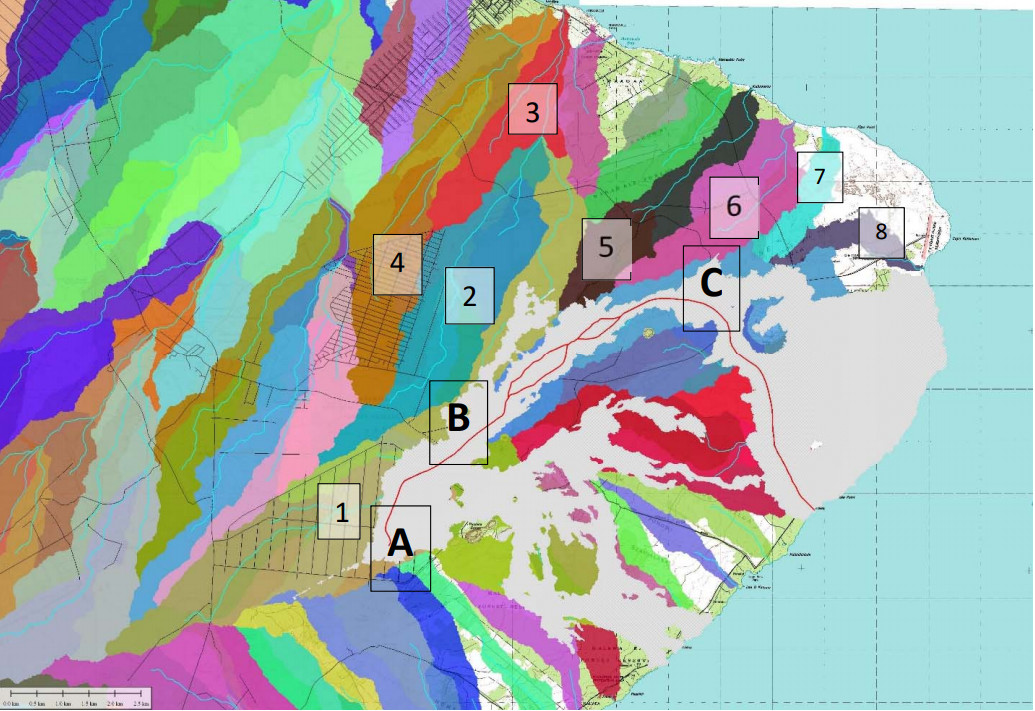 Figure 4. Map of lavasheds that drain through steepest descent lines (light blue). The numbered lavasheds are described in the text. The grey cross‐hatched lava flow polygon is the erupted lava from all fissures as of July 12, 2018. The red line within the July 12 lava flow polygon represents the fissure 8 channel system on that same date. (from USGS document)

The following passage from the report references the numbered lavasheds found in the map (Figure 4) above:

Upper channel (A – B)
Any major flow caused by a breach of the west wall of the channel between the vent (A) and the intersection Pohoiki Road and Highway 132 (B) is likely to advance northeast into lavashed 1, hugging the northeast edge of the existing flow. Beyond Highway 132, the flow may enter lavashed 2 and become captured by steepest descent lines that pass along the eastern boundary of the Nanawale Estates subdivision (along Road A and possibly Seaview Road). If the flow continues to advance, it will ultimately cross Railroad Avenue and Government Beach Road, enter lavashed 3, and reach the ocean between 1.3 and 2.3 km southeast of Kahakai Boulevard. If the flow enters lavashed 2 and stalls, subsequent lava flows advancing along the west side of the stalled flow could enter lavashed 4 in Nanawale Estates subdivision and ultimately reach the coast slightly closer to the Hawaiian Beaches and Hawaiian Shores subdivisions.

Middle channel (B – C)
The fissure 8 channel becomes braided northeast of B, with narrower sections that could form choke points. If one of the narrower sections becomes blocked by large collapse fragments from the channel wall or spatter cone, lava could be diverted out of the channel. If, in this scenario, part of the channel is redirected to the north, lava could feed into lavasheds 5 or 6 and threaten homes and infrastructure in the Noni Farms area, Railroad Ave., Papaya Farms Rd., and Government Beach Rd. before entering the ocean between Kalamanu and the northern edge of the 1960 lava flow.

Lower channel (below C)
The ʻaʻā channel has been unstable in the area of Kapoho Crater (C) and beyond to the ocean. Most recently on July 9‐10, a channel overflow in the area northwest of Kapoho Crater created a new lobe that advanced south along the west margin of the existing flow and entered the ocean on July 12 destroying a school and a beach park; however, the previous flow to the northeast continued to ooze lava into the ocean along its entire front. Although not fed by any surface flow, the earlier flow north and east of Kapoho Crater to the ocean is still oozing lava into the ocean from its front and could potentially thicken and widen beyond the current flow margins as it has in the past several weeks. Flows advancing from a breach in the northeast side of the channel near Kapoho Crater may enter lavasheds 7 or 8 and again threaten the the handful of remaining structures in the Kapoho Ag Lots and Beach Lots, structures built on the eastern section of the 1960 lava flow, and the Cape Kumukahi Lighthouse. 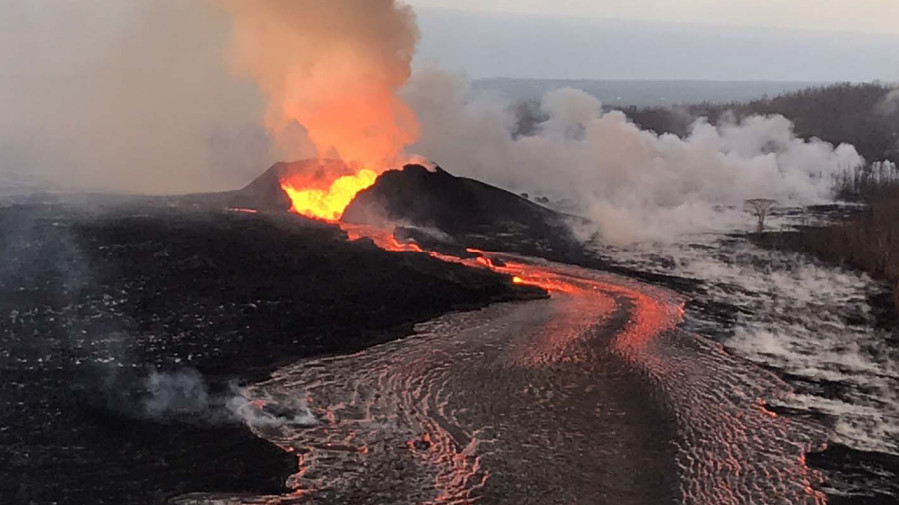 The document also mentions the possibility of increased tephra fall should higher lava fountaining occur at Fissure 8, seen in the USGS photo taken from the publication. The USGS reports:

At the moment, lava from fissure 8 erupts from a 60–80‐m‐long fissure segment. Discharge from the fissure was initially characterized by relatively steady low fountaining but has evolved into more chaotic Strombolian (large bubble bursts) activity. If the eruption begins to coalesce into single point along the fissure, higher fountains (100‐300 m) could be produced. This would result in more widespread deposition of Pele’s hair and cinder. Pele’s hair has already been reported several times in Pāhoa (about 5 km or 3 mi northwest of fissure 8 fountains) during slack or southerly winds. Both the 1955 and 1960 eruptions in the same general area produced fountains much higher than what has been seen thus far during the current eruption.

Other hazards mentioned in the report include vog, and – at the ocean entry – delta collapse, laze, and hydrovolcanic explosions.

The USGS document also ponders: “How long will this eruption last?”

The volume of the current eruption has exceeded that of these older nearby eruptions. The steady discharge from fissure 8 shows no sign of waning supply, suggesting relatively constant magma pressure; the lack of significant ground deformation in this area shows that there is neither storage nor withdrawal from the May intrusion since its initial emplacement. If the ongoing eruption maintains its current style of activity at a high eruption rate, then it may take months to a year or two to wind down. While this seems to be the most likely outcome, a pause in the eruption, followed by additional activity, cannot be ruled out, nor can an abrupt cessation or a transition to steady, longer‐lived activity at a lower effusion rate.

The 15-page report can be downloaded from the USGS Hawaiian Volcano Observatory.