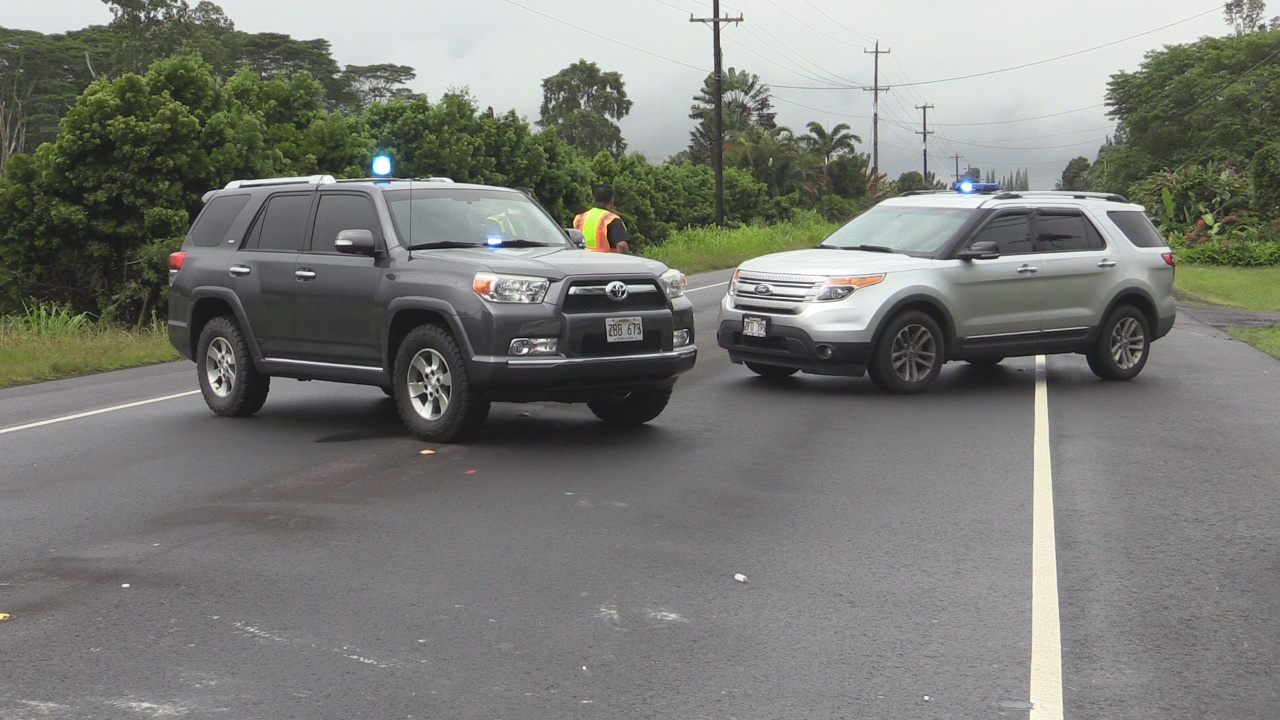 image from video recorded in Mountain View by Daryl Lee

HAWAII ISLAND - The investigation is continuing into the most recent shooting that occurred on South Point Road in Kaʻū which resulted in the death of Justin Waiki.

(BIVN) – Three individuals have been charged as accomplices to Attempted Murder in the First Degree, police say, following the shootout in Kaʻū that left an officer injured and the suspect in the killing of another police officer dead.

Sgt. Bryan Tina was identified in media reports as the Hawaiʻi Police Department Special Response Team Sergeant who was shot by 33-year old Justin Waiki in the area of South Point, moments before Waiki himself was shot and killed by police on July 20. Waiki was the target of an intense, island-wide manhunt after he reportedly shot and killed officer Bronson Kaimana Kaliloa on July 17, during a traffic stop in Mountain View.

The firearm used by Justin Waiki to shoot Sgt. Tina was a 38 revolver, police say. The firearm was reported stolen from a residence in March 2018.

On Saturday, a police media release reported the sergeant was recovering nicely at Hilo Medical Center and presently is in stable condition.

35-year-old Jorge Pagan-Torres and 30-year-old Malia Lajala, both of Hilo, and 29-year-old Krystle Ferreira, of Kamuela, were arrested at the scene for Hindering Prosecution in the First Degree. They were transported to, and held at, the Kealakehe Police Station pending continuing investigation.

Detectives recovered the vehicle used in this incident and upon search warrant execution recovered several items to include numerous rounds of unspent ammunition, 0.9 grams of a black tar-like substance suspected to be heroin, 0.1 grams of a crystalline substance suspected to be methamphetamine, and approximately $620 in cash. At the scene, detectives also recovered a .38 caliber revolver that had previously been reported stolen in March.

Today, (July 22), at 1:30 p.m., detectives charged Pagan-Torres, Lajala, and Ferreira with one count each of accomplice to Attempted Murder in the First Degree, accomplice to Place to Keep – Revolver, Hindering Prosecution in the First Degree, and Criminal Conspiracy. In addition, Pagan-Torres was charged with two counts of Probation Violation and Lajala was charged with two counts of Promoting Dangerous Drugs in the Third Degree.

There is no bail set and all three individuals remain in custody at the Kealakehe Police Station pending their initial court appearance tomorrow morning, (July 23), at the Kona District Court.

In an earlier media release, police reported the vehicle used to transport Waiki on South Point Road was a Toyota 4-runner, registered to the parents of the passenger Krystle Ferreira.

Police also had more information on a fourth, unidentified passenger who was wounded in the July 20 shootout:

The female party who was shot in the vehicle at the scene is 35-years-old and still being treated at Hilo Medical Center for her injuries. Other than receiving a gunshot wound to the leg area, she has a broken femur.

The memorial service for Officer Kaliloa will be held at the Afook Chinen Civic Center in Hilo on Saturday, August 4th. Kaliloa is survived by his wife and three young children.