HAWAII ISLAND - The summit area of Kilauea has been constantly rocked by earthquakes building to collapse events, and on Sunday evening a temblor also shook the south flank. 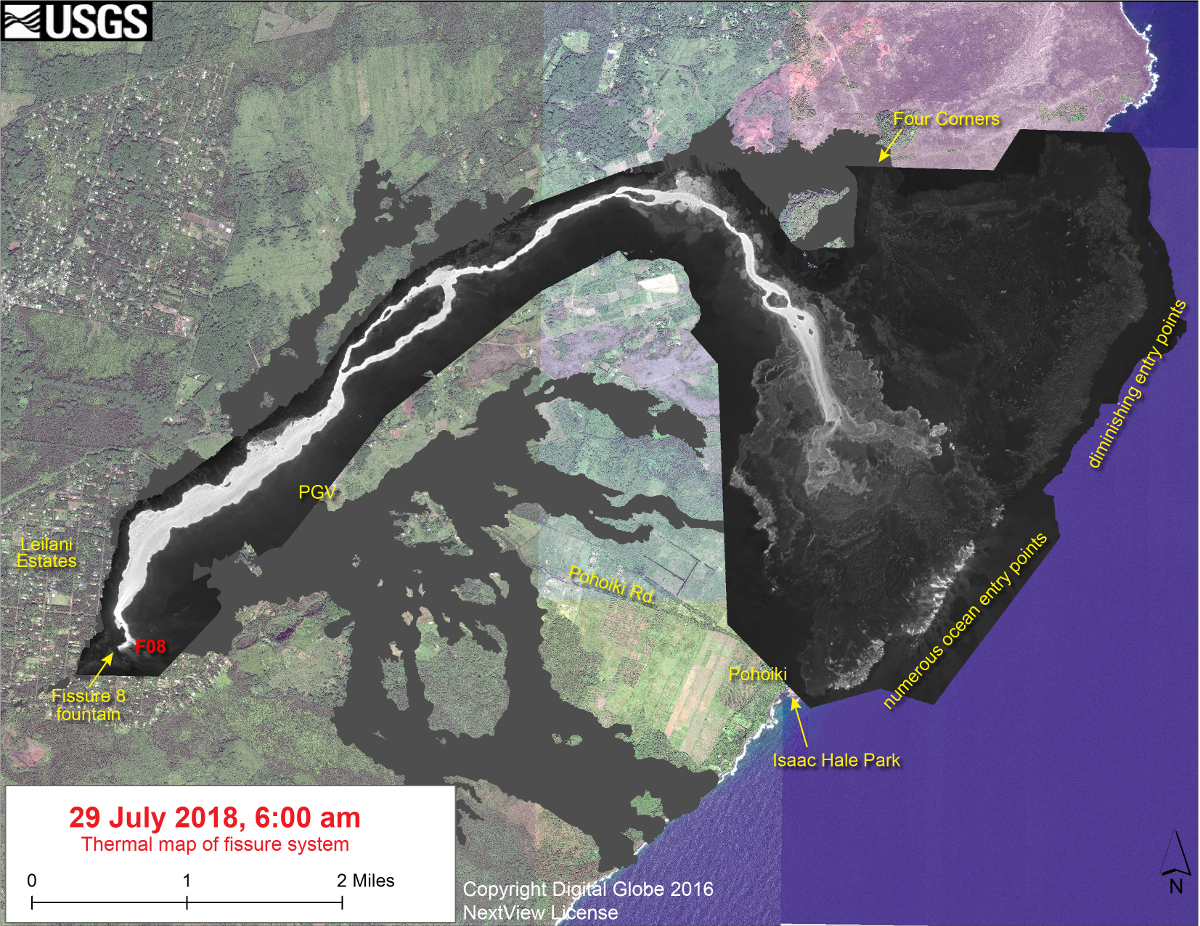 (USGS) This thermal map shows the fissure system and lava flows as of 6 am on Sunday, July 29. The fountain at Fissure 8 remains active, with the lava flow entering the ocean. The dominant ocean entry points were on the section of coastline near Ahalanui. The black and white area is the extent of the thermal map. Temperature in the thermal image is displayed as gray-scale values, with the brightest pixels indicating the hottest areas. The thermal map was constructed by stitching many overlapping oblique thermal images collected by a handheld thermal camera during a helicopter overflight of the flow field. The base is a copyrighted color satellite image (used with permission) provided by Digital Globe

(BIVN) – A Magnitude 4.1 earthquake shook the south flank of Kilauea last night just after 10 p.m., and “was felt as far away as Kalapana to Hilo,” Hawaii County Civil Defense said this morning, adding that “no damage was reported.”

Earthquakes continue to shake the summit area, rattling the neighborhoods of Volcano Village, leading up to the next collapse event. The collapse events are usually equivalent to a Magnitude 5.3 or so, but unlike last night’s quake, they are not felt in Hilo. Officials remind affected residents to check all utility connections of water, gas, and electricity for potential damage from earthquake activity.

Undaunted, a small group of business owners and community leaders in the Volcano area have created a new organization called Experience Volcano Hawaii LLC. “The initial goal of this group was to address the economic impact due to the recent volcanic activity on the Big Island,” a recent media advisory stated. They plan to “highlight activities and accurate information that will benefit the many residents and visitors that visit the Volcano area,” and will be holding a press conference today at 11 a.m.

Civil defense says “State Highways reports no new cracks on Highway 11, but requests motorists between mile marker 28 and 32 stay on the pavement, be alert for changes in roadway conditions, and drive with caution.”

“Fissure 8 continues to erupt into the channel sending lava flows into the ocean at Ahalanui, creating a large laze plume,” this morning’s message stated. “HVO field crews report fluctuations in the channel level with spillovers occurring locally along the channel. Yesterday’s flyover reports the margin of the flow remains approximately 500 feet from the Pohoiki Boat Ramp at Isaac Hale Park with the main ocean entry approximately 0.75 miles northeast of Pohoiki Boat Ramp.”

The Disaster Recovery Center has moved and is now at the Pahoa Community Center located at 15-3016 Kauhale St., Pahoa. Officials say the hours of operations are 8 a.m. to 6 p.m. weekdays and 8 a.m. to 4 p.m. on Saturdays.