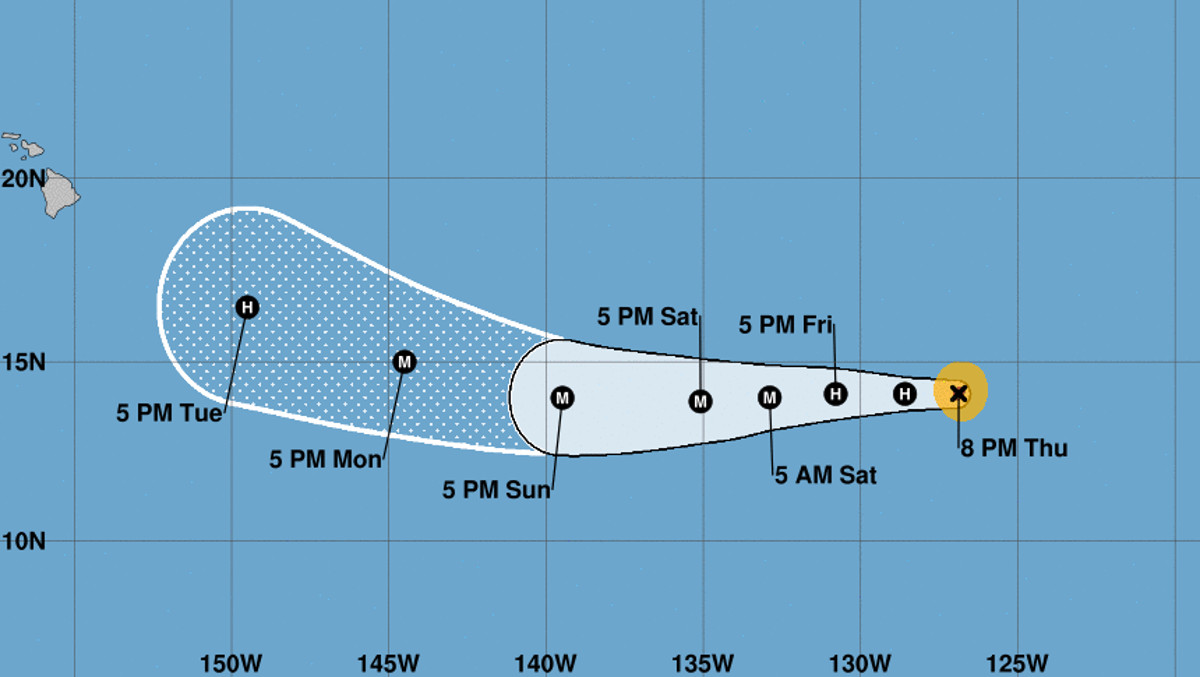 HAWAII ISLAND - The Island of Hawaii will be keeping an eye on Hurricane Hector as it moves west towards the Central Pacific. 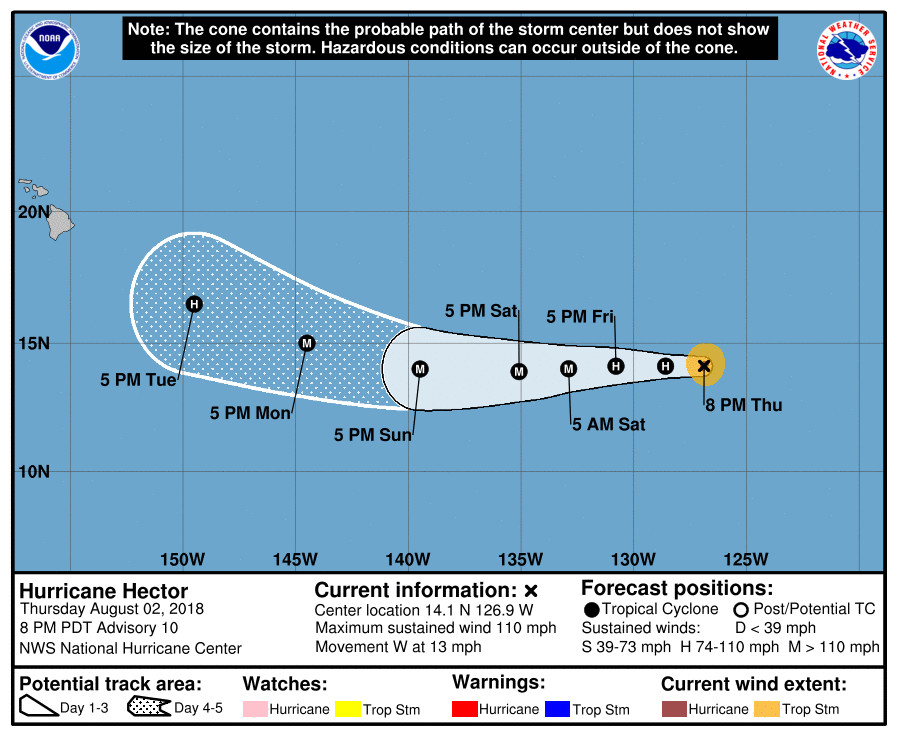 UPDATED with the 5 p.m. HST 5-day from the NWS National Hurricane Center

UPDATE (5 p.m. HST) – “Hector’s rapid intensification has ended for the moment,” the National Hurricane Center reported this evening, “with satellite imagery showing that the eye has become cloud filled since the last advisory.” Hector remains a Category Two hurricane.

(BIVN) – Hector is a small but powerful hurricane this afternoon, and is moving west at 14 mph.

The Category 2 hurricane is a far 1,970 miles east southeast of Hilo, but early forecasts are enough for Big Island residents to take notice. Hector is expected to intensify into a major hurricane and although the predicted track at 5 days and beyond comes with great uncertainty, it appears the storm could turn in the general direction of Hawai‘i by next week.

“Well, so much for the shear,” wrote forecasters in a Thursday morning discussion, adding that “satellite images indicate that Hector is rapidly intensifying and has recently formed a small eye.”

Six hours later, the NWS National Hurricane Center in Miami, Florida offered this discussion, which touched upon the “perplexing” aspects of the forecast:

Hector has intensified an impressive 50 kt over the past 24 hours-remarkable since the environment did not seem particularly favorable even 12 hours ago. What is perplexing about this forecast is that, despite all of the global models showing a more conducive environment during the next day or two, none of the regional hurricane models show intensification, and in fact they all show weakening. This would be a dramatic change, which seems pretty unlikely given the current state of things. It makes the most sense to show continuing strengthening, albeit at a reduced rate since the SSTs do moderate, in line with the SHIPS & LGEM models. The new forecast has a peak intensity at 72 hours when SSTs are the warmest with the lowest environmental shear. After that time, water temperatures and mid-level humidites should gradually decrease, which will probably promote some weakening. Obviously this is a low confidence forecast, and I wouldn’t be surprised if it had to be raised in the short term later tonight.

Hector continues on course, moving westward at 12 kt. The track forecast for the next 3 days is of high confidence, since the guidance is in good agreement and a large subtropical ridge is providing a well-defined steering current. Complications arise in the long range due to the potential interaction of Hector with a mid-level trough in the Central Pacific. The latest models show Hector moving into a weakness in the ridge associated with the trough, causing a more west-northwestward motion earlier in the forecast. This is a fairly subtle change but has led to most of the guidance trending to the north. The official forecast is shifted in that direction, but remains on the southwest side of the guidance envelope, close to the corrected-consensus models.

UPDATE: The storm has already impacted Hawai‘i plans in one way. The Polynesian Voyaging Society has decided to postpone the departure of Hikianalia to California until next week at the earliest.

“We are concerned about our crew on the canoe as well as their families being left behind, so we are holding off the launch of this voyage until the risk of this hurricane and any other weather issues have passed,” said Nainoa Thompson, president, Polynesian Voyaging Society. “We want to make sure that both the canoe and our homes in Hawaiʻi are safe, and we want to allow our crew to be here to make sure their families are okay,” he added.

The Polynesian Voyaging Society will continue to work closely with the National Weather Service to monitor the weather to determine the safest time for the crew to set sail, a media release stated.