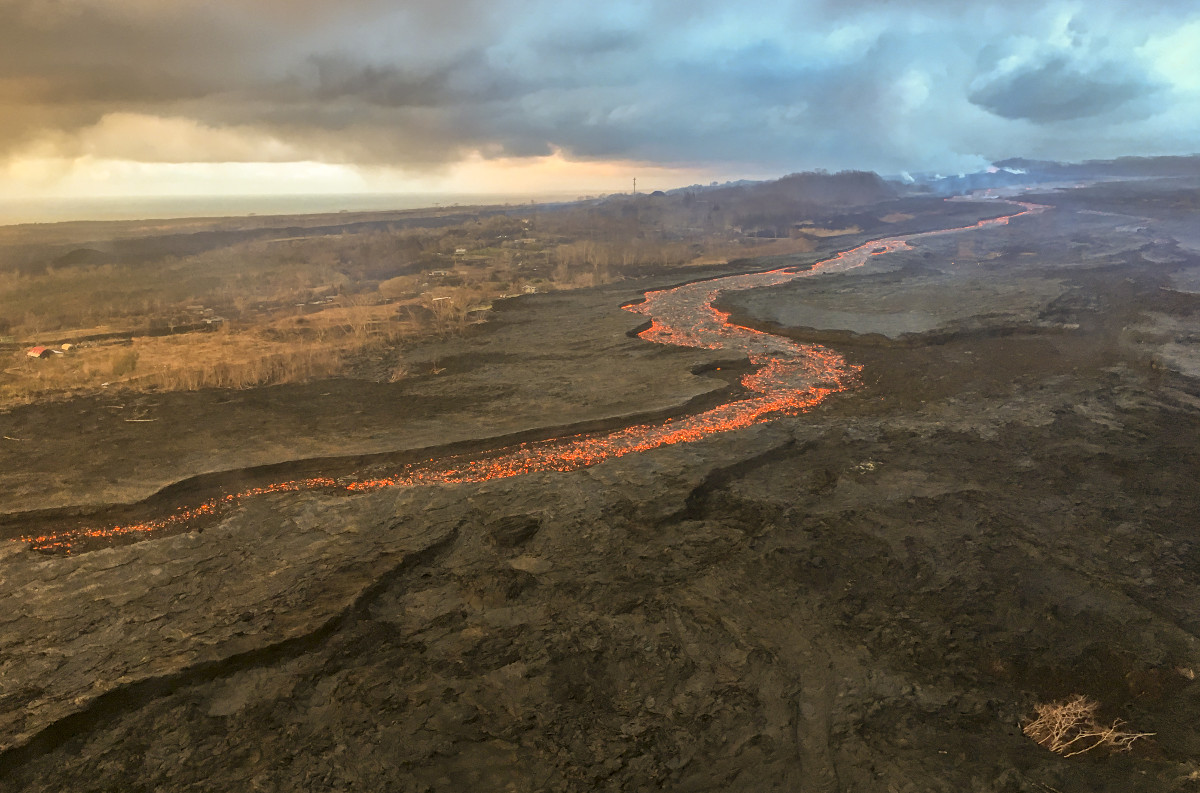 USGS: Lava was moving sluggishly through the fissure 8 channel today

HAWAII ISLAND - Rates of seismicity and deformation at summit and lava output from fissure 8 have decreased since most recent collapse event on August 2.

(UPDATE) – In a message posted at 9:25 p.m., the USGS Hawaiian Volcano Observatory said “rates of seismicity and deformation at summit and lava output from fissure 8 have decreased since most recent collapse event at 11:55 am HST August 2.”

“Too soon to tell if the decrease will persist,” USGS added. “Hazardous conditions remain.”

(UPDATE) – A short time after this update was published, reports began to emerge that a large portion of the Fissure 8 channel had “crusted over”, as the once-fast moving lava river had transitioned into slow moving ‘a‘ā flow. In some areas along the channel, like the section by Papaya Farms Road for example, the ‘a‘ā has accumulated into large mounds, creating concerns that the next surge of lava – if there is one at all – could be diverted from the blocked channel.

No overflows were reported this morning, the USGS Hawaiian Volcano Observatory wrote earlier in the day. “Lava levels appear generally low in the channel which is incandescent at its surface to approximately 4.5 km (2.8 mi) from the vent,” scientists said, “however, lava is still flowing farther beneath the crust to the vicinity of Kapoho Crater where it is seeping out of both sides of the channel, sometimes into adjacent vegetation starting small fires.”

“The lower lava channel adjacent to Kapoho cone shifted west about 0.25 km and is now feeding lava into the southwest sector of the lower flow field,” USGS reported. 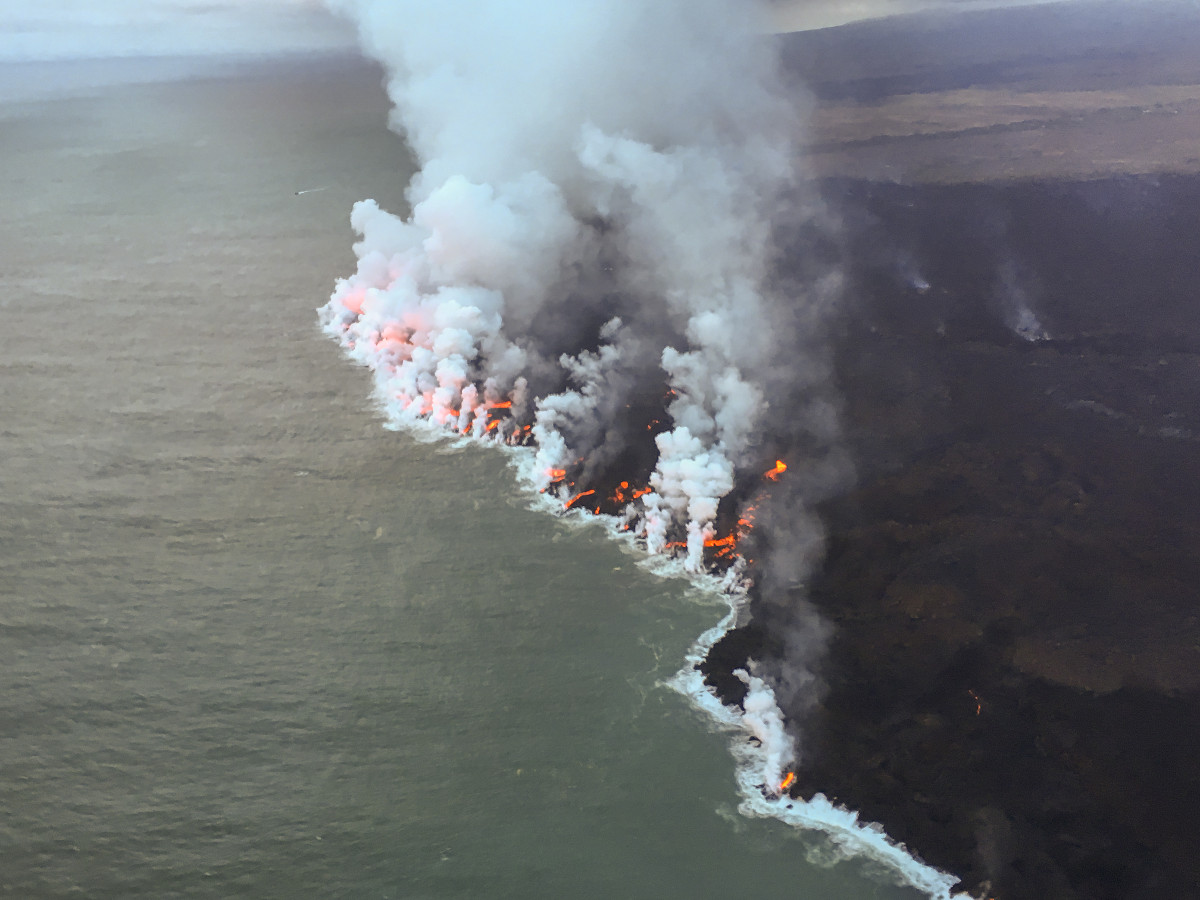 (USGS) Multiple streams of lava were oozing into the sea along the southern lobe of the active ocean entry near Isaac Hale Park this morning.

USGS also had this to say about the lava ocean entry next to Pohoiki:

At the ocean entry, observers note the possible the southwestward migration of ooze-outs from the southwest portion of lava front, the northeast half of the flow’s ocean-front is inactive with no evidence of effusion into the ocean. The Pohoiki boat ramp is intact this morning. 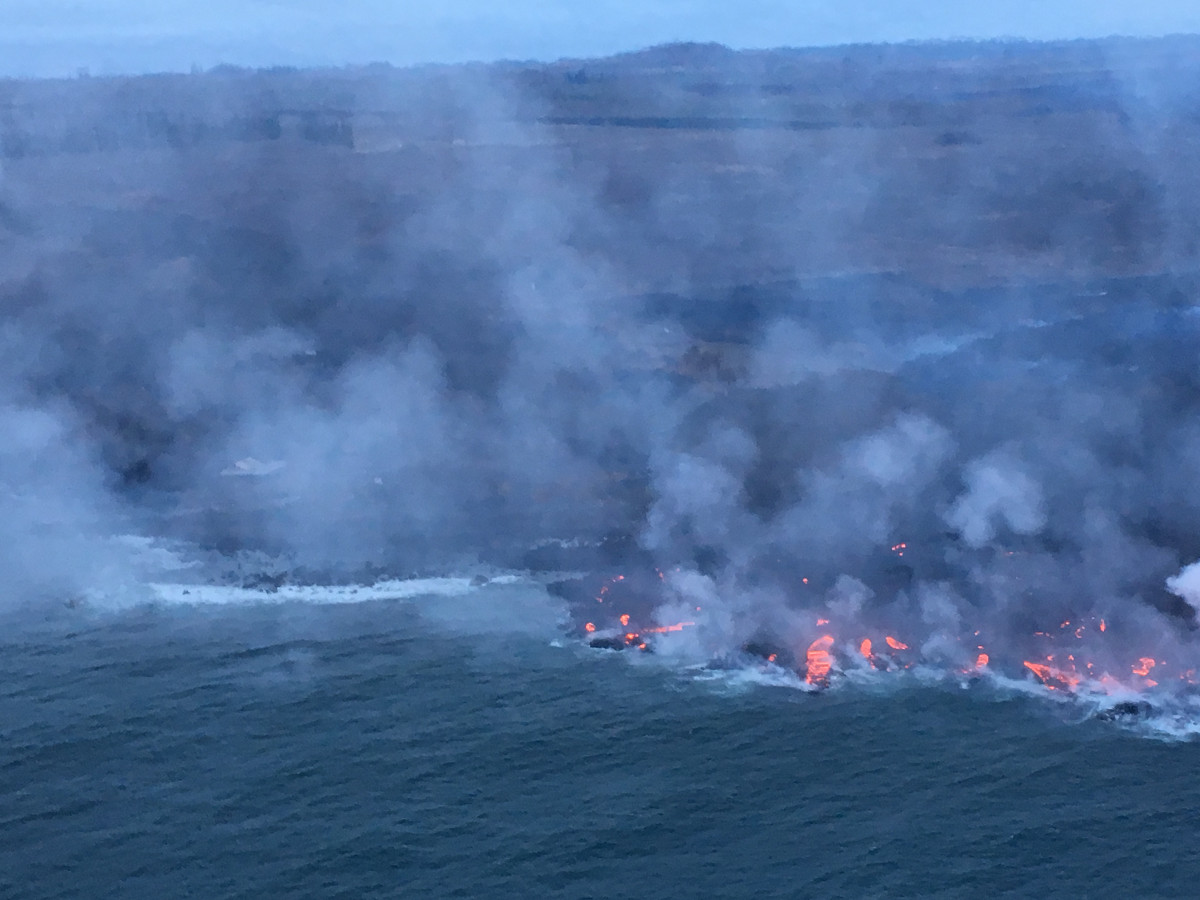 (USGS) A slightly different view of the southernmost lobe of ocean entry lava streams. The roof of the house at Isaac Hale Beach Park can be seen through the laze plume. 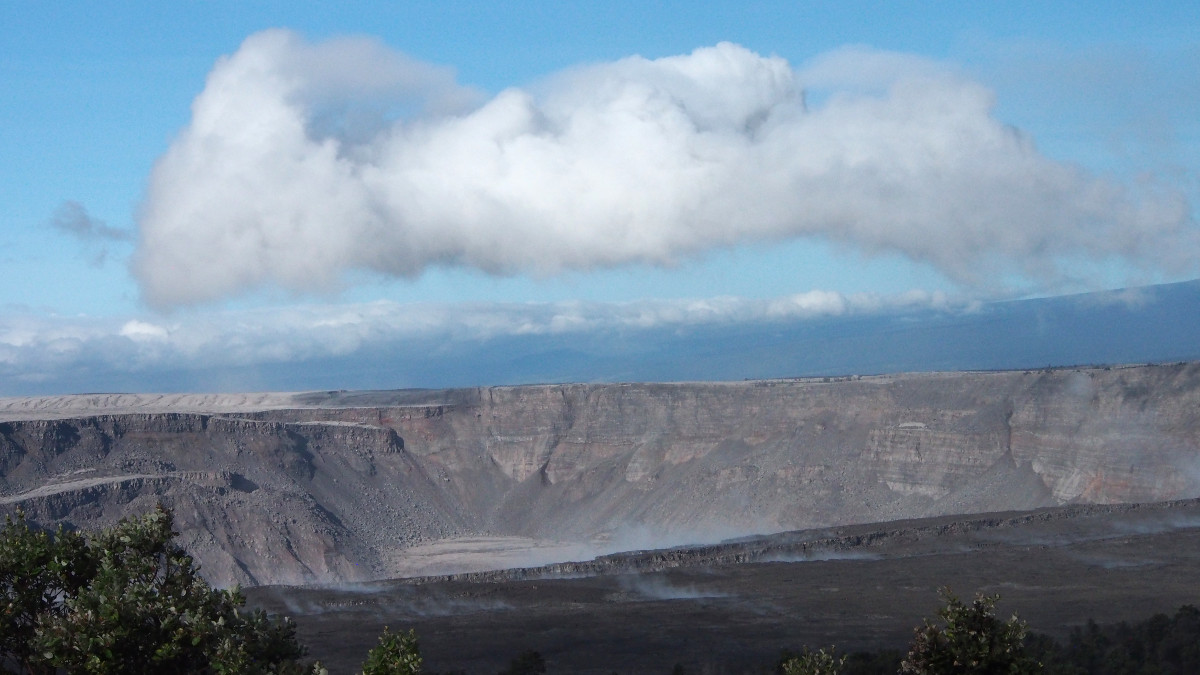 (USGS) Misty weather is coming and going this morning at the summit of Kīlauea. A break in the mist allowed this clear view of Halema‘uma‘u from the northeast rim of the caldera, from which talus (rock fragments) piled at the base of the steep crater walls can be seen. With each summit collapse. rocks in the crater walls are shaken loose, widening the crater. Since May 16, 2018, the crater depth has more than tripled and the diameter has more than doubled.

Between the sluggish lava flow and the longer intervals between summit collapse events, island residents are wondering if this could be a sign that the eruption on the lower East Rift Zone is waning. This was a topic discussed in the latest Volcano Watch article posted by the USGS Hawaiian Volcano Osbervatory:

“How long will it last?” is one of the most challenging questions asked about a volcanic eruption, including Kīlauea Volcano’s current lower East Rift Zone (LERZ) eruption.

The short answer is that no one knows for sure. We can, however, offer the most likely possibilities based on characteristics of the current eruption and comparisons with past eruptions.

The LERZ eruption started on May 3, 2018. Over the next few weeks, a total of 24 vents briefly erupted, but only the 8th fissure, which initially opened on May 5 and reactivated on May 27, is still erupting today. On June 4, the fissure 8 lava flow reached Kapoho Bay, where a lava delta continues to grow as lava enters the ocean.

Knowing how much lava is erupting could help answer the duration question, but it’s been difficult to measure the fissure 8 eruption rate. U.S. Geological Survey (USGS) scientists have used several techniques in recent weeks to obtain a rough estimate of 50 to 150 cubic meters per second (65–196 cubic yards per second), for a total erupted volume to date of 0.5 cubic kilometers (0.12 cubic miles).

A decreasing trend in this rate would suggest that the eruption might be ending—or be over when the eruption rate gets too low to sustain ongoing activity. Unfortunately, we’ve not detected any trends. The eruption rate seems more or less constant with some short-term variations.

Preceding the LERZ eruption, geophysical monitoring of earthquakes and ground deformation tracked the subsurface intrusion of magma under Leilani Estates. If we could detect decreases in the volume of that intrusion as fissure 8 lava continues to erupt from it, we could estimate the length of time after which the intrusion would be depleted.

But monitoring has detected no changes in the intrusion since its emplacement. This suggests that magma withdrawn by the fissure 8 eruption is being quickly replaced.

We also turn to past eruptions for clues to possible duration. In the recent USGS hazard assessment of fissure 8 (https://volcanoes.usgs.gov/vsc/file_mngr/file-185/USGS%20Preliminary%20Analysis_LERZ_7-15-18_v1.1.pdf), Kīlauea’s 2018 eruption was compared to four past LERZ events.

The 1840 eruption, which lasted 26 days, had an average eruption rate similar to today’s rate. In 1924, earthquakes and major subsidence in the Kapoho area suggested that magma had intruded the LERZ, but no eruption occurred.

The most recent LERZ eruption occurred in Kapoho in 1960. It lasted about 5 weeks, and its eruption rate was less than half that of today’s eruption.

Kīlauea’s lower East Rift Zone has erupted more than 100 times in the past 2,500 years. We cannot determine the durations or eruption rates for those past events. Thus, we must use a proxy for those quantities, such as area covered by lava and total volume erupted—if we can get good estimates.

Heiheiahulu, a shield-shaped vent similar to Kupaianaha (active 1986–1992), may have erupted in the early 18th century. It is located about 10 km (6 miles) uprift of fissure 8, and its lavas cover about 45 square kilometers (17 square miles). The similarity of its structure to that of Kupaianaha and Mauna Ulu suggest that Heiheiahulu erupted for several years.

Lava from Puʻu Kaliu, located 1.6 km (1 mile) uprift of fissure 8, covered about 12 square kilometers (4.6 square miles) with an estimated volume of 0.2 cubic kilometers (0.05 cubic miles). Puʻu Kaliu lava flows, thought to have erupted in 1790 from fissures on either edge of the LERZ, are similar to the 1840 flow.

So, how long will the 2018 LERZ last? Based on past eruptions and current geophysical monitoring, it could continue for many months to a few years. Time will tell.