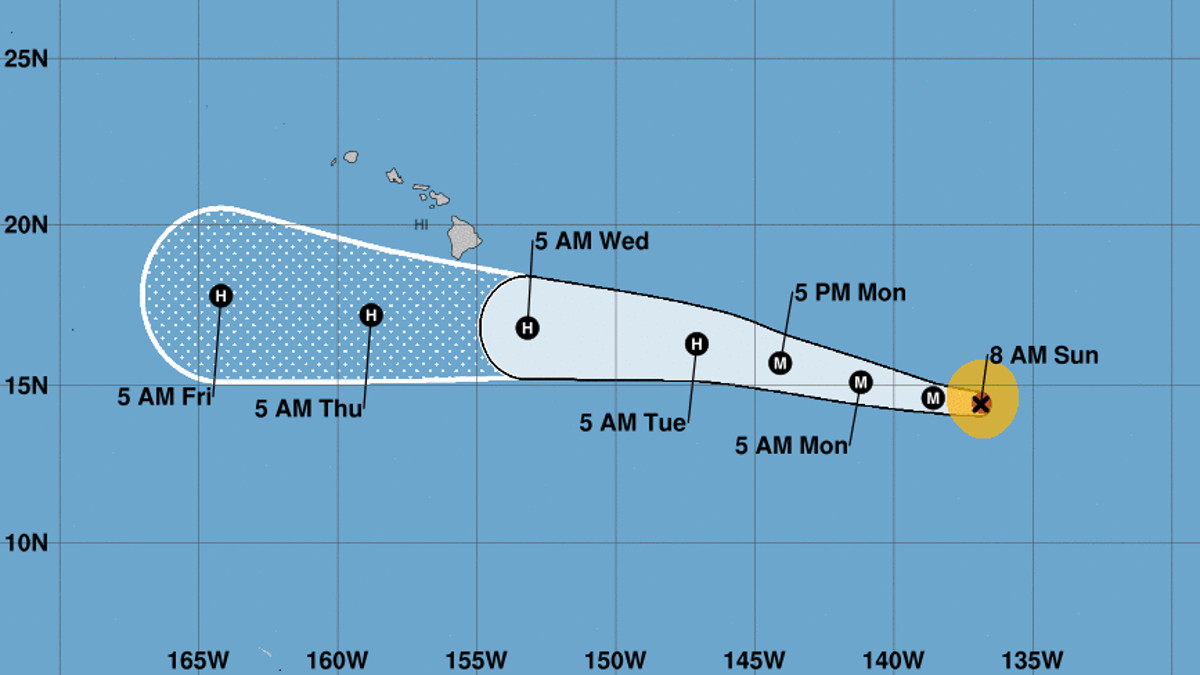 HAWAII ISLAND - Hector was a Category Three hurricane on Sunday morning, heading west at 12 mph towards the central Pacific basin.

(BIVN) – At 5 a.m. HST, the center of Hurricane Hector – now a Category 3 hurricane with maximum sustained winds near 125 mph – was located 1,255 miles east southeast of Hilo.

Hector is moving toward the west near 12 mph, and the National Hurricane Center says this general motion is expected to continue for the next few days with some increase in forward speed. Hector will cross into the central Pacific basin tonight or early Monday.

From the morning discussion at the National Weather Service:

Hector continues to maintain a 10-15 n mi wide eye surrounded by a ring of -60 to -70 degrees Celsius cloud tops. The eye has become slightly less distinct this morning and recent microwave data suggest that an eyewall replacement cycle could be occurring. A 1111 UTC AMSR2 microwave overpass shows a double eyewall structure with the inner eyewall open to the southwest. The various subjective and objective satellite estimates are between 102-110 kt, and the initial wind speed is kept near the upper-end of these estimates for now.

Hector is forecast to remain over warm sea surface temperatures and within a low shear environment for the next couple of days, and so forecasters wrote that “it is possible for some fluctuations in intensity to occur as the result of eyewall replacements. By 48 h, the hurricane is predicted to encounter some drier mid-level air which is forecast to cause gradual weakening after that time.” 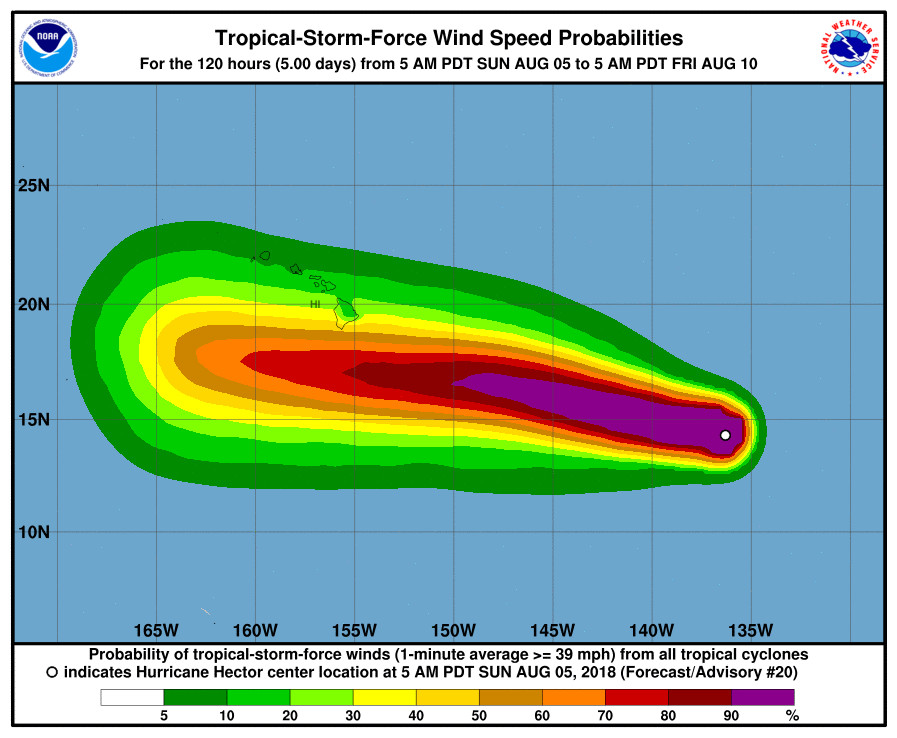 “While the official forecast track continues to lie south of the Hawaiian Islands, it is too soon to determine what kind of impacts might occur in the state, since track errors can be large at long time ranges,” the National Hurricane Center wrote. “This remains a good time for everyone in the Hawaiian Islands to ensure they have their hurricane plan in place.”

A lot depends on the deep-layer ridge to the north of Hawaiʻi, forecaster say:

The hurricane is moving westward or 275/10 kt. west-northwestward motion is expected over the next day or so as Hector is steered by a deep-layer ridge to its north. The ridge is forecast to strengthen north of the Hawaiian Islands by mid-week which should cause the hurricane to move on a general westward track throughout most of the remainder of the forecast period. While all of the dynamical models are in agreement on the overall scenario there is a fairly typical amount of cross-track spread with the ECMWF along the southern edge of the guidance envelope and the HMON and GFS along the northern side. The updated NHC track forecast is close to the latest consensus aids, and little overall change to the previous forecast was required. 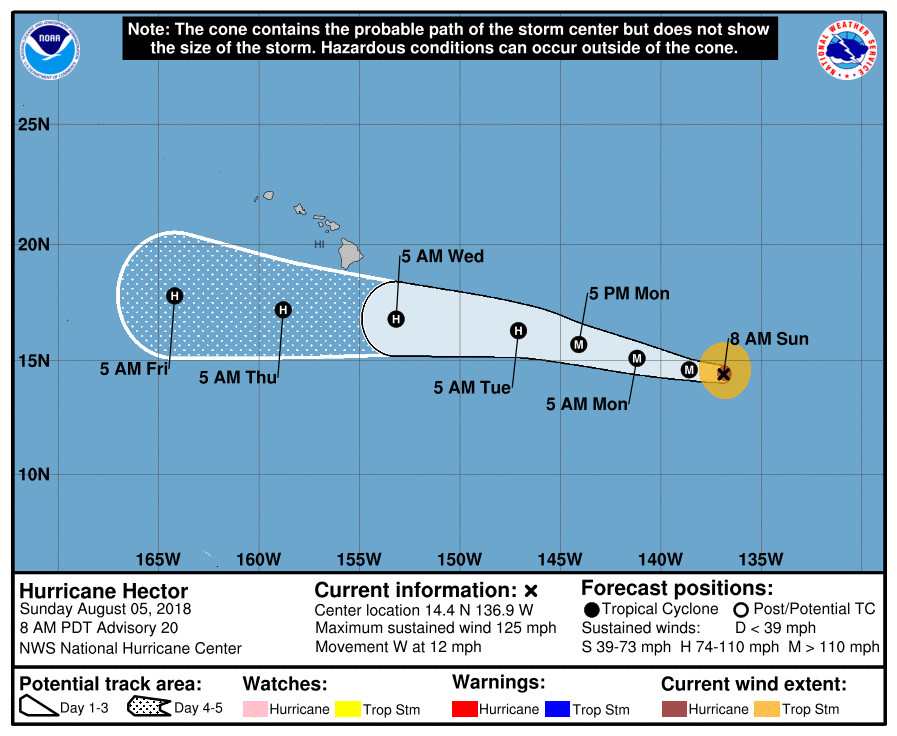 This is what the National Weather Service in Honolulu wrote this morning at 5:23 a.m. HST:

The forecast for the middle of the week, from Tuesday night through Thursday, hinges on the track and intensity of Hurricane Hector. The system is currently centered roughly 1300 miles east- southeast of Hilo moving toward the west. The National Hurricane Center continues to indicate that Hector will enter the Central Pacific later today and reach the local region around the islands around the Wednesday time period. One of the challenges with Hector is its small size and small errors in track or intensity of this storm may produce large changes to local island weather patterns. Unfortunately, Hector remains too far away to predict if it will directly impact the state or pass to the south, as average track errors are still around 200 miles this many days out. We introduced some elevated precipitation chances over the eastern slopes of the Big Island from Wednesday into Thursday as deep tropical moisture will likely move up the slopes of Maunakea and Maunaloa producing enhanced rainfall activity. Hector related weather forecast impacts for other islands will need to wait until the time period gets closer.